A trip to the hospital ‘just to be safe’ has turned into a nightmare for the parents of a baby boy who ended up needing urgent brain surgery.

He was quickly flown to a major children’s hospital for surgery after doctors diagnosed him with hydrocephalus – a life-threatening illness that causes cerebrospinal fluid (CSF) to build up in the brain.

Lucas has since been suffering seizures due to surgery complications which doctors say has resulted in brain damage – the extent yet to be determined. 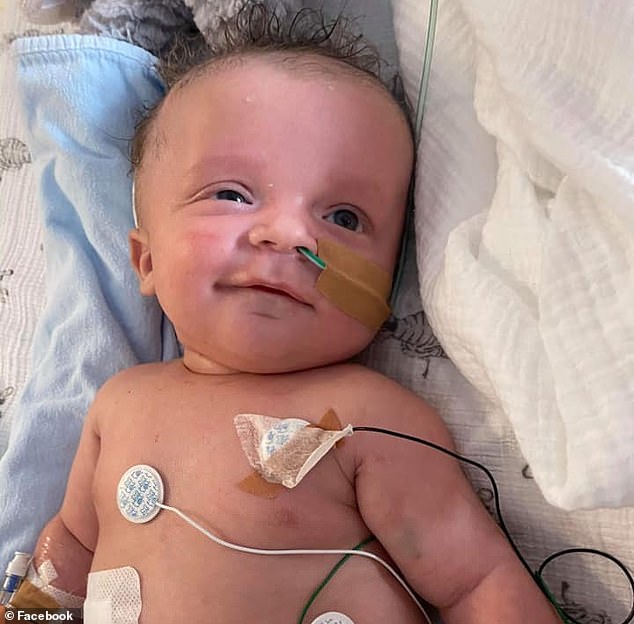 Last week, as he turned three-months-old, his parents were just thankful he is still alive.

‘It has been every parent’s worst nightmare,’ Ms Archer, 27, told Daily Mail Australia.

‘When we saw Lucas after the surgery he was white, unresponsive and barely breathing. Within 10 minutes he had crashed.

‘I don’t think any parent ever wants to hear that their baby is not going to make it.’

Although born premature, Lucas had been meeting his milestones and was a ‘healthy and happy baby’.

He would always smile at his parents and older siblings Charlie, six, and Elouise, four, eagerly following them with his eyes as they moved throughout their Wauchope home on the Mid North Coast of New South Wales.

But on February 22, Ms Archer noticed Lucas was acting differently. By 6pm, when the little boy could no longer open his eyes properly, she started to panic.

‘I felt sick. I thought “have I missed something? He wasn’t drinking, is he dehydrated now? Has one of the two kids been too rough?”‘Ms Archer said. 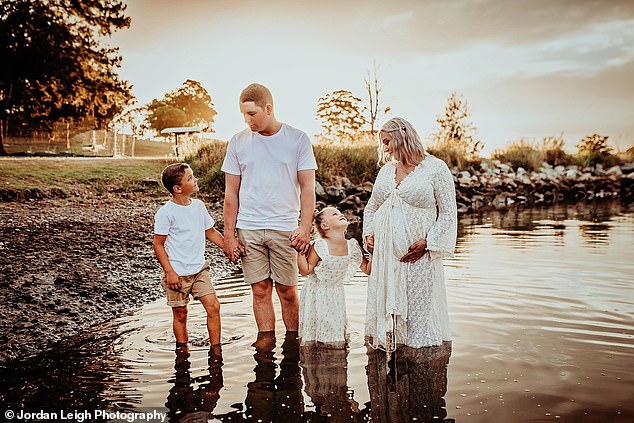 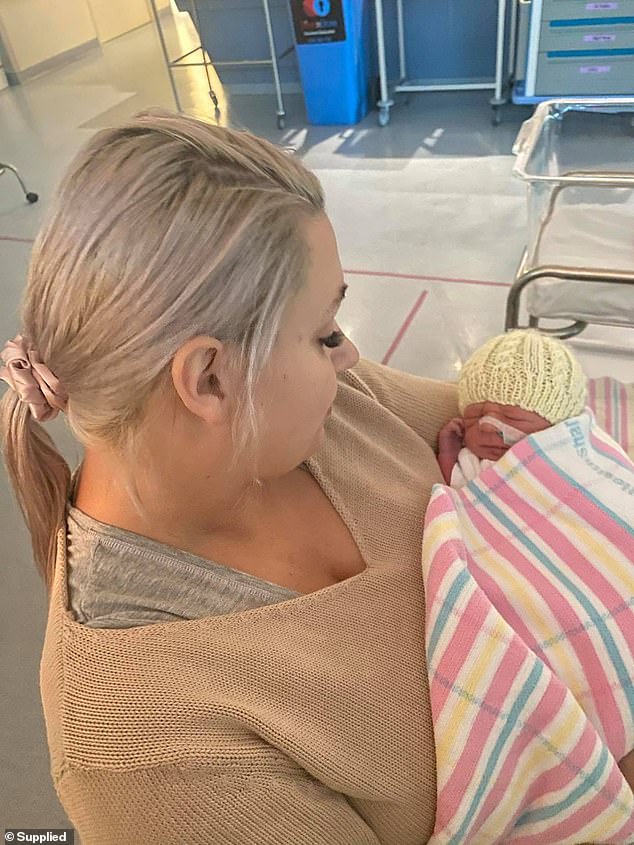 Although born premature, Lucas (pictured with his mother, Tori) had been meeting all of his milestones and was a healthy baby

‘Ryan said let’s just go to the hospital to be safe. We thought we were being overprotective parents and would only be there for two hours.’

Despite walking into a full waiting room at the Port Macquarie Hospital in NSW, the parents were immediately ushered into the paediatric bay for Lucas to undergo testing. That is when Ms Archer knew something was seriously wrong.

Within 30 minutes, doctors gave Lucas’ diagnosis and his parents were told he required immediate surgery or would go into cardiac arrest.

At Westmead Children’s Hospital in Sydney, neurosurgeons inserted a shunt – a tube that helps drain CSF – into Lucas’ brain, but hours after leaving the operation table he went further downhill.

Doctors warned Ms Archer and Mr Anthony to brace for the possibility their beloved son would not survive.

But after an anxious three-hour wait, Lucas was wheeled out to see his parents.  Although heavily sedated, strapped to machines and covered in needles, he was miraculously stable.

‘It was like a weight off our shoulders,’ Ms Archer said.

‘Even though he was on medication, had drips in his arms and needle holes all over his body, we still had our baby boy.’

But Lucas’s battle was far from over. He spent the next 48 hours suffering seizures every five to ten minutes after a vein in his brain burst following surgery, causing bleeding in his frontal lobe.

The residual blood has created a constant risk of further irritation in his brain, meaning he could take another turn for the worse at any moment. 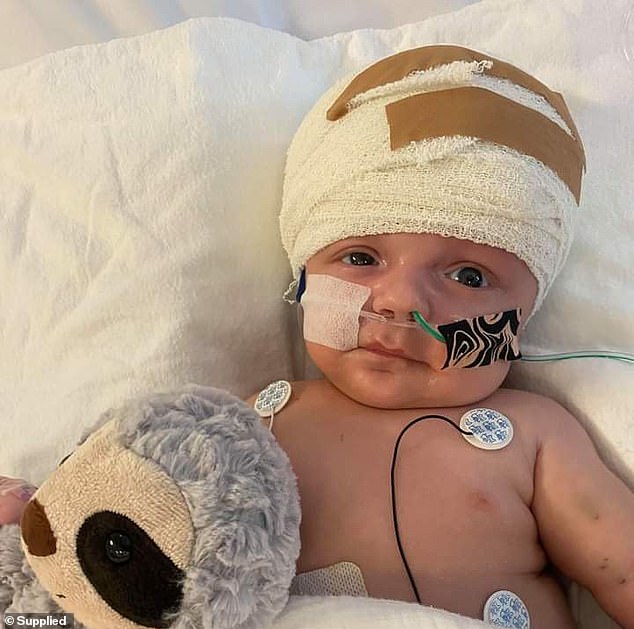 A team of specialist nurses, paediatricians, neurosurgeons, and speech pathologists have been monitoring Lucas, whose seizures have now reduced to a few a day.

He is now stable and out of ICU, but his parents been warned it is now ‘just a waiting game’ to see if he improves.

While it is still too early to gauge the severity of his brain damage – and assessments will not start until his seizures are brought under control – his parents have noticed behavioural signs that he is no longer the same.

‘At a minimum, doctors said he would have delayed development or at worst severe brain damage and he will require assistance for everything,’ Ms Archer said.

Each year, one in 1000 children in Australia is born with hydrocephalus, but many more adults and children acquire the condition through accidents, tumours, bleeding or infection.

Although CFS is normally absorbed by the brain, hydrocephalus occurs when there is a blockage or the body is creating too much, putting pressure on the brain as the fluid makes it swell and enlarge.

However, the origin of Lucas’ condition has left seasoned doctors baffled after CT scans could not pinpoint anything abnormal.

‘They believe he may have had a post-partum bleed on his brain, but they are not completely sure,’ Ms Archer said.

‘In his 30 years, the doctor has never seen a case like it.’ 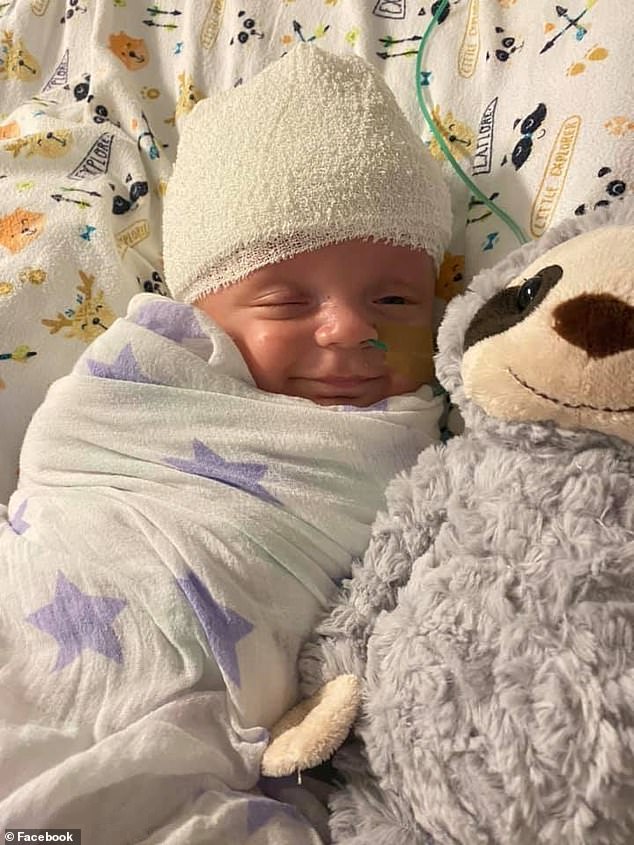 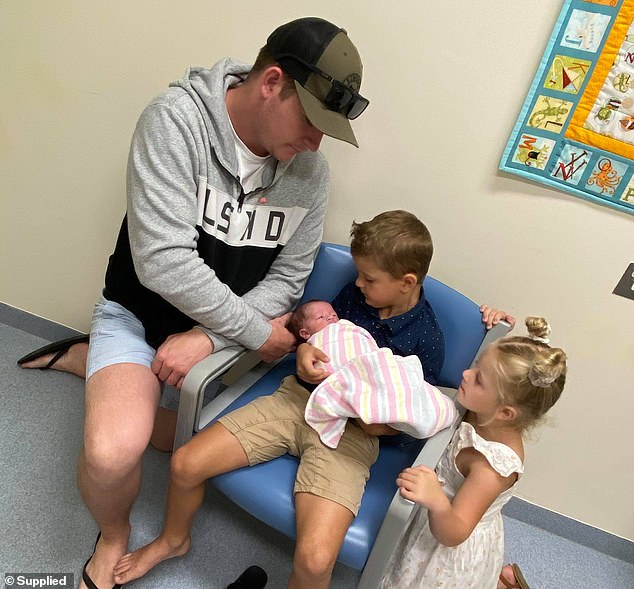 Lucas’s parents have relocated to Sydney while Lucas is in hospital, which could be for six weeks or longer. Pictured: Lucas with his dad and siblings shortly after his birth

The couple have been told they are looking at a six-week minimum before Lucas can be discharged, putting financial pressure on the family as Mr Anthony, 22, a diesel mechanic, takes time off work to be in Sydney.

Ms Archer’s sister Zoe has set up a GoFundMe campaign to cover the ongoing costs of food, rent and travel over the next few weeks – or possibly months – the family will be away from home.

While they have been fortunate to secure a room at Ronald McDonald house and Lucas’s upfront hospital bills are covered by medical care, the couple will also need to pay for future treatment such as occupational therapy.

The community has rallied around the couple, who served as volunteer firefighters during the horror 2019 bushfire season, donating more than $6,000.

Ms Archer said the family have been overwhelmed by the support.

‘We can’t even believe it,’ she said.

‘My sister said when our community needed us the most we fought fires for 169 days straight, and it was time for us to get the support back.’

China: We want our astronauts to be able to stay on the moon for extended periods of time

China: We want our astronauts to be able to stay on the moon for extended periods of time