Liverpool injury problems: Do Reds need to sign a defender? 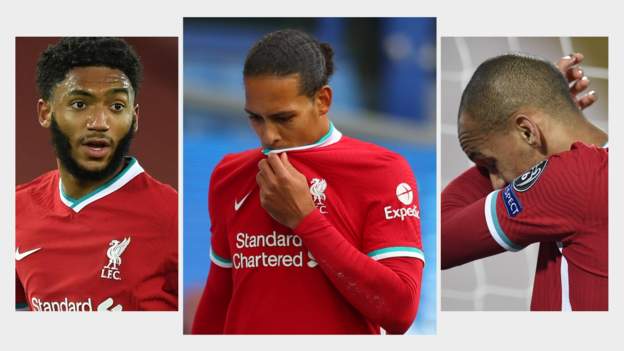 
Facing the league leaders, away from home, with possibly your entire first-choice back four missing through injury, is not an ideal way to return to Premier League action for any side.

But it’s at the back that the issues really stack up. Virgil van Dijk and Joe Gomez are both set to miss most of this season, while full-backs Trent Alexander-Arnold and Andy Robertson both sat out internationals because of fitness concerns.

How bad is the Reds’ injury situation?

It’s bad. Well, as bad as it can be for a team who are champions and still just a point behind leaders Leicester.

Klopp has been without Van Dijk since the centre-half damaged anterior cruciate ligaments (ACL) when tackled by goalkeeper Jordan Pickford in a 2-2 Premier League draw at Everton on 17 October.

Gomez has had surgery on a knee injury picked up while training with England and is likely to miss a “significant part” of the rest of the season, according to his club.

Alexander-Arnold has a calf injury and missed the last England squad get-together, while Scotland captain Robertson has a hamstring injury. Even midfielder Fabinho, who had been standing in for Van Dijk in defence, has been injured. The Brazilian is set to return after this international break, having missed the past three Reds matches.

Gomez started 22 of the 38 Premier League games but was unquestionably first choice this season before injury.

Van Dijk completed more passes than anyone else in the Premier League last season, while Burnley defender James Tarkowski was the only defender to win more aerial challenges. There’s a reason why the Dutchman is viewed as the most complete defender in the division.

Only Manchester City playmaker Kevin de Bruyne had more assists in the league than the two full-backs – their absence would be felt just as keenly going forward as in defence.

So far this season, Liverpool have kept just one clean sheet in the league and conceded 16 goals – only Leeds and West Brom (both 17) have let in more. At the same stage last term, they had let in only six goals and had managed two clean sheets.

They have won the fewest aerial challenges (90) and made the fewest headed clearances (36) in the league this season – but have still lost just once, the 7-2 thrashing at Aston Villa on 4 October.

What are their options?

So, with Gomez now out, who fills in?

Cameroonian Joel Matip is the only fit senior centre-back at the club and presumably will start. However, he has had injury problems of his own, having played only three times this season, and it is generally accepted he cannot play three matches a week.

Nat Phillips, 23, and 19-year-old Rhys Williams have played in recent weeks. Phillips can only play domestically as he was not registered for Europe but stood out on his Premier League debut against West Ham on 31 October.

Williams has featured five times this season and has not looked troubled, making his Champions League debut just a year after taking the field on loan for Kidderminster in National League North, the sixth tier of English football.

Klopp has also played midfielders Henderson and Georginio Wijnaldum in the defence, the former in the Club World Cup and the latter away at Brighton.

Back-up left-back Kostas Tsimikas has not played a minute in the Premier League yet, while the ever-dependable James Milner could fill in on either flank.

Who could they look to bring in?

Could Liverpool make a big mid-season buy? Van Dijk himself was an expensive January purchase – moving to Anfield from Southampton for £75m at the start of 2018.

Having spent on forward Diogo Jota and midfielder Thiago in the summer, Klopp was content to face this season with three senior centre-backs and let Dejan Lovren leave.

Hindsight suggests that to be a rare Klopp mistake – one similar to Manchester City’s decision not to replace Vincent Kompany when he left in 2019.

But who could the Reds look at if they did make a move?

RB Leipzig’s 21-year-old defender Dayot Upamecano – who reportedly has a £40m release clause in his contract from next summer – is a player who has already attracted the attention of many of Europe’s top clubs. But Upamecano was torn apart by Marcus Rashford as Manchester United beat Leipzig 5-0 in the Champions League on 28 October.

Napoli’s Kalidou Koulibaly has been linked repeatedly with a move to the top end of the Premier League.

Brighton’s Ben White, 23, was said to be on Liverpool’s radar at the end of last season but has been playing in midfield for the Seagulls of late.

Bringing Wolverhampton Wanderers captain Conor Coady back to the club was a recent suggestion from former Reds defender Jamie Carragher during a jokey interview on Sky Sports.

Coady was with the Reds for seven years as an academy player before making his debut in 2012 – alongside Carragher – the first of two senior appearances he made for the club.

His stock has risen significantly in recent months as he has established himself as part of Gareth Southgate’s England squad. He has impressed at Wolves since their 2018 return to the Premier League and, like Van Dijk, played every minute of the last top-flight campaign.

But the former midfielder plays for club and country in a back three and has just signed a new five-year contract.

Stick or twist? It could depend on how the league table looks come 1 January.

PS5 Is Already Getting Some Beautiful Custom Paint Jobs

Anti-lockdown protesters gather at Germany’s parliament ahead of vote

Anti-lockdown protesters gather at Germany's parliament ahead of vote