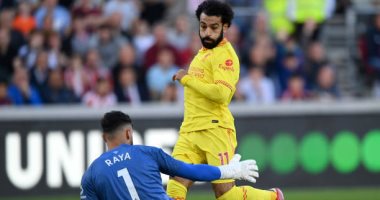 The professional English team, Liverpool, in its ranks, the Egyptian star Mohamed Salah, drew with its host Brentford, with a goal for each, in the first half of the confrontation being held between them at the “Griffin Park” stadium, in the sixth round of the English Premier League competition “Premier League” this season. 2021-2022.

Ethan Pinnock scored the goal for Brentford in the 27th minute of the match.

Diogo Jota scored the equalizer for Liverpool with a superb header in the 31st minute of the match.

Brentford defender Christopher Ayer prevented a goal for Egyptian star Mohamed Salah in the 7th minute of the match, as the pharaoh was alone with the Brentford goalkeeper to hit the ball very skillfully under the goalkeeper, but Ayer intervened at the last minute to save the ball from the goal line.

Liverpool will face Brentford with the following formation:

Mohamed Salah scored 4 goals during the English Premier League matches in which he participated this season, and also made two goals.