Liverpool’s mass-swabbing scheme carried out 12,000 tests on its first day


Up to 12,000 Liverpudlians were screened for coronavirus on the first day of the city’s mass testing programme, its public health director has said, insisting the initial progress was ‘very encouraging’ despite hour-long queues where people mixed with others who were potentially infected with the virus.

Liverpool’s Matt Ashton said they were ‘still working on the numbers’ but initial estimates suggest there were about 1,500 to 2,000 people tested at each of the six testing sites.

A further eight sites were opened today, as the Government ramps up capacity to reach its target of 50,000 tests a day once the city-wide programme becomes fully operational. Liverpool is home to 500,000 people.

Everyone of Liverpool’s 500,000 residents is being encouraged to get tested, regardless of whether or not they have symptoms. They are being offered either rapid tests, that give results in less than an hour, alongside the normal PCR swabs that are already being used in centres across the country.

Residents have decried the first day of the mass testing regime as a ‘shambles’ because those who were well were forced to mingle in hour-long queues with people potentially infected with Covid-19.

Photographer David Colbran, 51, told MailOnline yesterday he was left queuing up with people that had symptoms despite feeling well and said ‘it’s not until you get to the first person in hi-vis that they ask you if you have symptoms and you realise you have been stood with people who have symptoms for over an hour’. 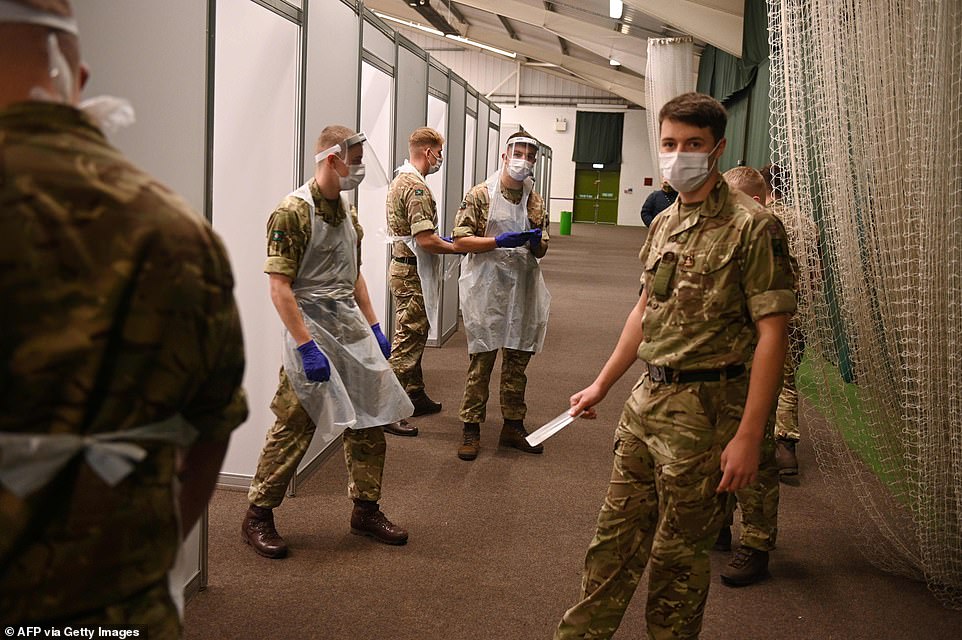 Soldiers prepare to swab Liverpudlians at a testing centre in Liverpool today. The city was at the centre of the UK’s second wave, and is the first place to be offered a mass screening programme for the entire population 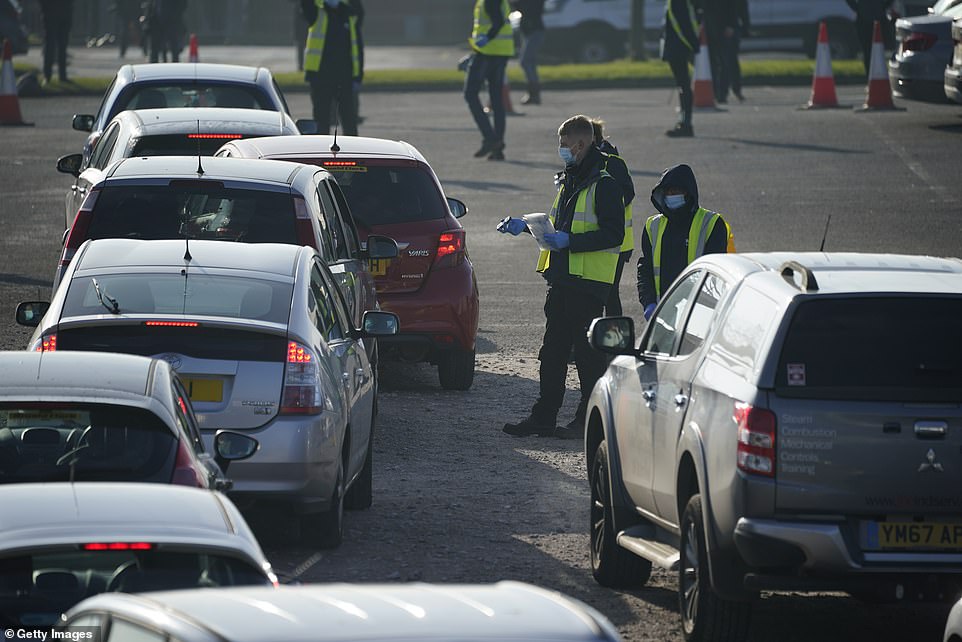 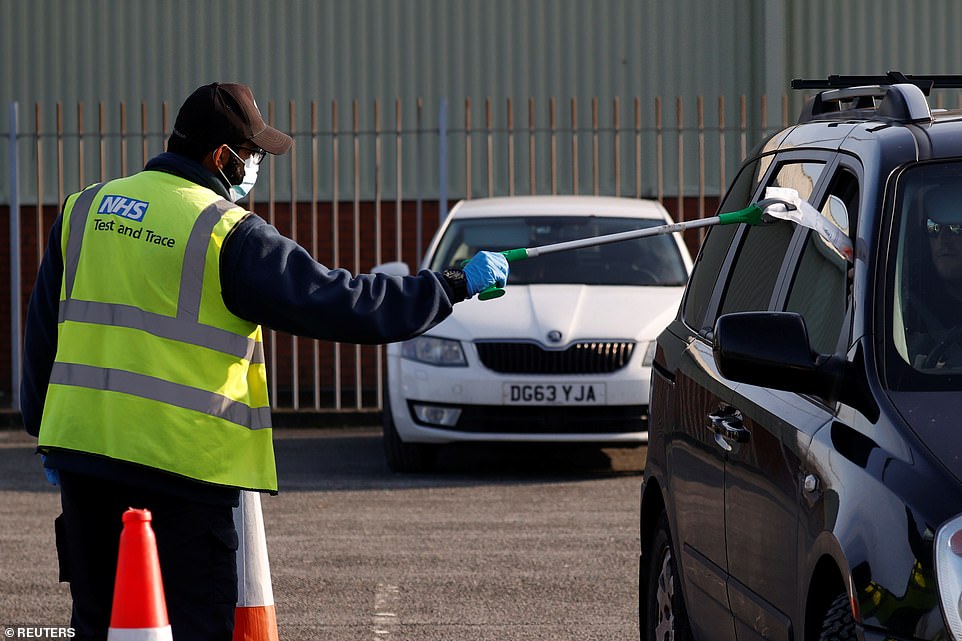 The number of people testing positive for coronavirus in Liverpool has plummeted in recent weeks, from a peak of almost 3,500 per day in early October. The city remains one of the worst-hit parts of England

The Merseyside city – once the nation’s coronavirus hotspot – yesterday began offering rapid Covid-19 tests to all 500,000 of its residents in the first major step forward for No10’s ambitious ‘Operation Moonshot’. Everyone is being encouraged to get tested, regardless of whether they have symptoms or not.

But residents have today complained to MailOnline that asymptomatic and symptomatic people were not segregated as they queued at testing centres for their swab, potentially opening the door for the coronavirus to spread more easily.

Photographer David Colbran, 51, said: ‘It’s a shambles, we booked an appointment to have a test for people with no symptoms but half the people here queuing up have symptoms and it’s not until you get to the first person in hi-vis that they ask you if you have symptoms and you realise you have been stood with people who have symptoms for over an hour. Some people have just turned up without an appointment and others have booked so it seems you can do both.

Joanne Topping, 59, a retired consultant, said: ‘The staff don’t seem to know what is going on. Obviously you have to understand that there will be teething problems but there’s no fluidity or organisation based on whether you’re here for the Operation Moonshot testing or the regular testing because you have symptoms.

‘It seems you can both book a test and just walk up to get one as part of the mass testing that the army are doing, but those that have booked a test are being processed quicker. People don’t mind waiting too much but we have already been here for an hour and haven’t moved.’

‘We acknowledged straight away we would be learning as we went along,’ he said. ‘I was on site on one of the centres all day and for the most part it ran very smoothly. There were lots of people around between 12 and 2 but we got the line management sorted.

‘It was good, it wasn’t perfect and we’ll improve it.’

Asked about whether Tier Three restrictions were working in the city, he told BBC Radio 4’s Today programme the level had not been getting the virus under control ‘by itself’.

He added a second lockdown was necessary because it will reduce infections in the city by cutting social contact. ‘The big question is will they cut them enough, will it take the levels of the virus low enough?’, he said.

He had previously said there was capacity for 85 centres to be set up by the end of the pilot scheme, which is due to last for 10 days initially, with the prospect of it being extended.

The scheme has drawn criticism from some health experts who have branded it not fit for purpose, with Allyson Pollock, professor of public health at Newcastle University, warning that plans to test asymptomatic people went against advice from the Scientific Advisory Group for Emergencies (Sage) to prioritise testing for those who were displaying symptoms.

Reports this morning suggest there are few queues outside testing centres as residents are encouraged to book a swab online and arrive in time for their appointment.

One resident said they got swabbed within 10 minutes and everything was well co-ordinated.

‘Just been to Liverpool airport to get my asymptomatic Covid test done,’ Dave Marteau wrote on Twitter.

‘Booked online, in and out through the drive through in 10 minutes, very well co-ordinated. Now to enjoy the rest of the weekend. #LetsGetTested.’

Resident Laura Hartley also wrote on social media: ‘Just been for my walk-in test at the Exhibition Centre.

‘Absolutely empty, only a few people in there and the Army were brilliant.

‘Organised and lovely to chat to if anyone’s nervous.

‘Go and get tested Liverpool, you don’t even need to book!’

Liverpool was the nation’s coronavirus hotspot and became the first region to be placed under Tier Three restrictions – the harshest measures – on October 14.

Since the rules – which closed pubs and bars and banned mixing between households – were imposed the city’s infection rates have begun to dip, suggesting they were limiting coronavirus transmissions in the city.

Liverpool mayor Joe Anderson said yesterday: ‘Thank you for the amazing and overwhelming support by everyone who waited patiently for a Covid-19 test today, I apologise for your wait and the inconvenience.

‘It will get better, please book a test or walk-in. Your support has been fantastic, let’s do it for our family, our NHS and our city.’