Living in a busy city doesn’t increase the chance of getting Covid-19, but overcrowding does, a new study reveals.

Researchers analysed cases in Tehran, Iran, one of the early epicentres of the pandemic, using data from AC-19, Iran’s national Covid ‘detection’ app.

After investigating the link between density and virus transmission in the city, the researchers found that ‘density alone cannot be considered a risk factor’.

The experts stress the difference between high urban density – a high number of people inhabiting an urbanised area – and overcrowding. 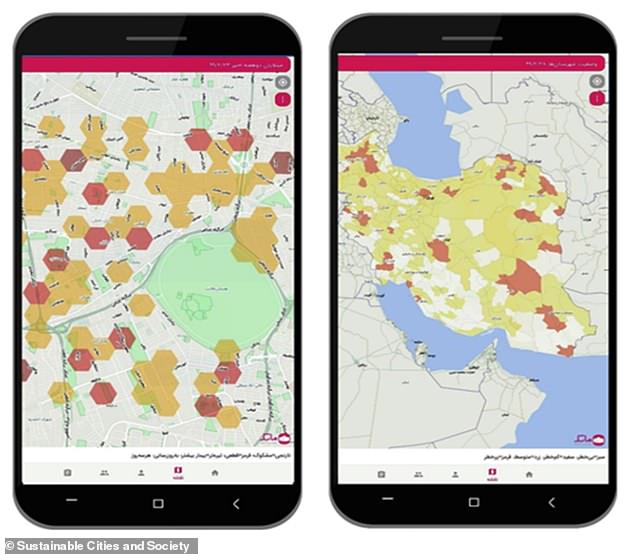 Pictured, screenshots from the AC-19 Mobile app. The right figure shows the state of pandemic spread at the city level and the left one depicts the status at the national level. Density alone did not explain the geographic distribution pattern of confirmed Covid-19 cases and deaths across the 22 municipal districts of Tehran

High urban density is a high number of people inhabiting an urbanised area.

Researchers stress the difference between urban destiny and overcrowding.

‘What drives the spread of infectious disease during a pandemic is overcrowding, which can occur in districts even with low density,said author Amir Reza Khavarian-Garmsir at the University of Isfahan.

Overcrowding reduces the ability to socially distance, while high urban density does not necessarily do so.

‘What drives the spread of infectious disease during a pandemic is overcrowding that operates differently from density and can also occur in districts with a low density,’ the team say in their paper, published in Sustainable Cities and Society.

‘As a result, metropolitan areas and densely populated zones can also be safe during the pandemic, as density alone cannot be considered a risk factor for Covid-19.’

The study authors, from Hiroshima University in Japan and the universities of Tehran and Isfahan in Iran, performed the analysis during the early months of the pandemic.

The researchers assessed whether certain variables affected infection rates across the 22 districts and roughly 8.6 million residents of Tehran. 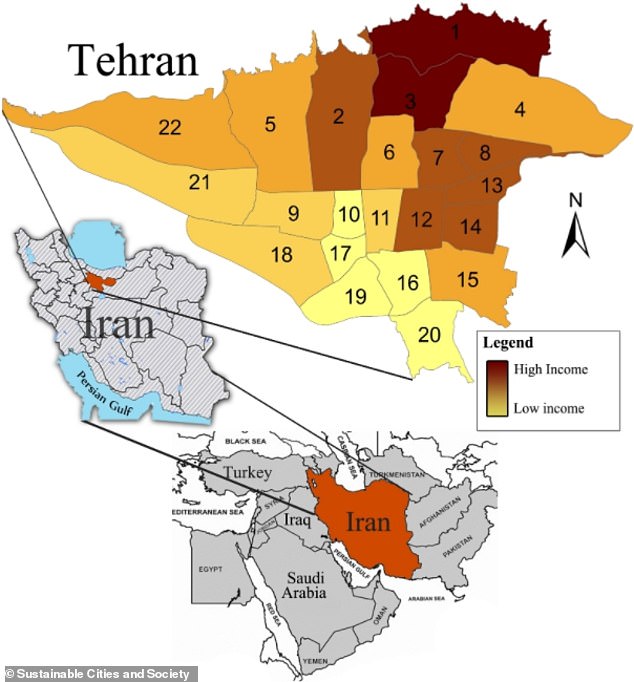 The geographic location of Tehran and Iran and income levels in the 22 municipal districts of Tehran. Images prepared by authors from Statistical Centre of Iran (2016) and Google Satellite images

They used ‘structural equation modelling’ (SEM), which uses multiple factors to indicate the influence of unobservable variables, such as likelihood to follow public health recommendations, in combination with measurable factors, like ease of access to medical facilities.

Density alone did not explain the geographic distribution pattern of confirmed Covid-19 cases and deaths across the 22 municipal districts of Tehran, they found,

However, responsible citizen behaviour is still needed to combat the pandemic in dense urban environments to avoid the overcrowding.

They also found that a population’s demographic structure – age, social and economic class, access to resources – is far more influential than simply how dense a population is.

Mortality rate was higher in districts with a greater proportion of older people, while a car owner or someone with a college education may also be less vulnerable to the disease, they reveal.

There are some drawbacks to the study, the researchers said – mainly data availability and accuracy.

The coronavirus pandemic evolved so rapidly in the early months that tracking may not capture the full picture. 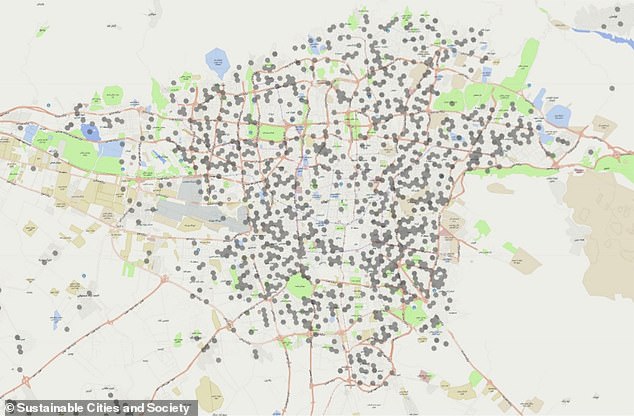 Map shows the location of Covid-19 death cases on June 27 last year in the city of Tehran, Iran

Testing shortages and cost, as well as a relative lack of severe symptoms in children and young adults, may have skewed the number of true positive cases.

‘It is perhaps too early to draw definitive conclusions, so future research should continue to investigate the relationship between urban density and transmission patterns of infectious disease,’ said study author Nabi Moradpour at the University of Tehran.

‘The next step is to further examine the impacts of urban density in other contexts,’ said study author Ayyoob Sharifi at Hiroshima University.

‘In addition, we are trying to examine the long-term impacts of the pandemic on compact urban development policies.’

AC-19, Iran’s national Covid ‘detection’ app, was withdrawn from the Google Play store due to spying concerns, according to reports.

Google removed the app on March 9, 2020 – about a week before it was released by by the Iranian government.

Users accused the Iranian government of using the pandemic to trick citizens into installing the app, according to an investigation by ZDNet.

The Iranian government then supposedly collected phone numbers and real-time geo-location data of its citizens.

AC-19 had also been developed by Smart Land Strategy, a company that previously built other apps for the Iranian regime, the report alleged.

However, ZDNet found the software free of any spyware.

‘Sources familiar with Play Store policies’ also said the app was most likely taken down because of a misleading claim that it could detect infections.

AC-19 was also made available through a dedicated website and other third-party app stores.

More than four million Iranians have installed the application on their smartphones, according to Sharifi et al (2021).