Livingston 2-2 Celtic: Neil Lennon says no crisis but title may be beyond them 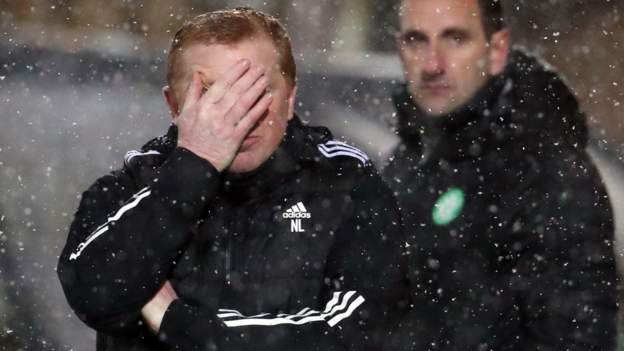 
Celtic are not a “shambles” or “in crisis” but a 10th consecutive Scottish Premiership title may now be beyond them, says manager Neil Lennon.

Captain Scott Brown was sent off as Celtic drew 2-2 with Livingston on Wednesday, their fourth league game in a row without a win.

It leaves them 20 points behind leaders Rangers with two games in hand.

“People will say it’s over, I can understand that, but we’ll keep going,” Lennon told BBC Scotland.

“The club isn’t a shambles, far from it. And it’s not in crisis off the field. The board have been magnificent; they’ve presided over nine titles in a row and a quadruple treble.

“I think people need to take a step back and put some perspective on it.”

Ciaron Brown headed Livingston into the lead, only for Mohamed Elyounoussi and Nir Bitton to turn the game around in Celtic’s favour.

But Jay Emmanuel-Thomas levelled after the break to earn the hosts a point and Celtic’s poor night was compounded when Brown was ordered off for lashing out at Jaze Kabia five minutes after coming on.

“Before lockdown, we were 13 points clear and were rampant. I don’t know where they’ve gone,” said Lennon of his players.

“At times it’s been ill-discipline, but the mentality hasn’t been as strong as it should have been.”

Celtic’s current run of four league games without a win is their worst run since 2000, and has ratcheted the pressure up on Lennon again.

Completing the quadruple treble in December by winning the delayed 2019-20 Scottish Cup final had dampened a little of the dissent but, with a 10th consecutive title now looking beyond them, the criticism seems set to intensify again.

“I won’t walk away, absolutely not,” he said. “I’ve put too much into this. Too much of my life. And a month ago we won the treble.

“We’ve lost two games in the league. Europe wasn’t good enough and we’re out of the League Cup. But we’re human beings and we haven’t played well for whatever reason. We can analyse it to death.

Russia extends the air suspension with Britain, due to the discovery of the new Corona strain