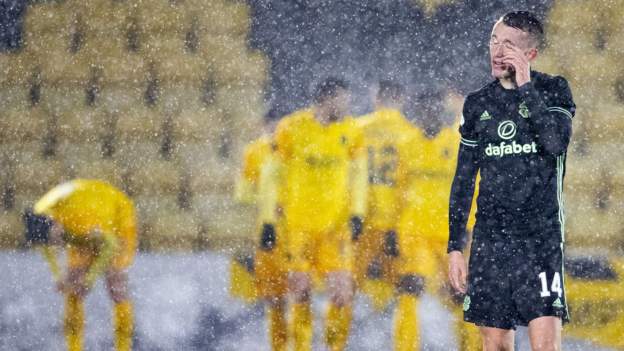 
Celtic have gone four consecutive league games without a win for the first time in 21 years, after a second draw in five days against Livingston.

Captain Scott Brown was ordered off for lashing out at Jaze Kabia five minutes after coming on, as Neil Lennon’s side now languish 20 points behind leaders Rangers with two games in hand.

Ciaron Brown headed Livingston into the lead, only for Mohamed Elyounoussi and Nir Bitton to turn the game around. But Jay Emmanuel-Thomas levelled after the break to earn the hosts a point.

It means David Martindale remains unbeaten in 10 games as manager with a League Cup semi-final against St Mirren to come on Sunday.

It was always likely to be a different affair than Saturday’s 0-0 draw between the pair, with Livingston making seven changes, Celtic six.

While the hosts’ motivation was keeping players fresh for the semi-final, Celtic were welcoming back those who had been forced to self-isolate following a positive Covid-19 case within the squad.

One side supposedly weaker, the other with strength in numbers. Yet a quarter of an hour gone and Livingston were in front.

So often this season Celtic have struggled at set-pieces. And after Shane Duffy gifted a free-kick, Julien Serrano drifted in a ball towards Brown, who steered his header beyond Vasilis Barkas.

Another error from Duffy led to Alan Forrest driving a shot just wide, but soon Celtic started to come alive. Leigh Griffiths hit the side netting before a series of corners led to the leveller, with Elyounoussi emphatically slamming in a Griffiths delivery.

Celtic’s Achilles heel may be defending set-pieces, but the second goal again arrived from one of their own. David Turnbull’s corner wasn’t properly cleared and a series of passes opened Livingston up before Bitton finished off the move, although he may have strayed just offside.

It could, and perhaps should, have been 3-1 when Kristoffer Ajer burst forward and latched into a through ball, but could not divert the ball past the goalkeeper.

Elyounoussi lobbed over, then forced a save as Celtic continued to foray forward with regularity. But as it began to look comfortable, Livingston hit them on the counter-attack.

Brown robbed Ryan Christie in possession, drove a ball across the box, and Emmanuel-Thomas side-footed in his fourth goal of the season.

As the snow began to fall heavily, the ball wasn’t moving as freely along the surface and Celtic’ frustration was growing.

Brown was introduced from the bench but, after swinging an arm at Kabia, his night ended early and Celtic’s faint title hopes dimmed even more as they matched an unenviable run set under Kenny Dalglish in 2000.

Man of the match – Mohamed Elyounoussi

That Martindale was able to make seven changes yet still get a performance from his side was testament to the spirit and guts his side are displaying at the moment. And it will be another boost before Sunday’s Hampden showdown with St Mirren.

Celtic at times played some good stuff going forward, but they continue to struggled defensively at a venue that has caused them problems on each of their previous three visits.

Livingston manager David Martindale: “I think we were a bit unlucky not to win after Celtic went down to 10 men.

“I thought there was a stonewall penalty in the second half and Celtic’s second goal was offside. I’m seeing it as a positive but just a wee bit frustrated.

“Every single one of the boys came out and stepped up to the plate. It shows collectively that we’re all in this together.”

Celtic manager Neil Lennon: “Scott had a moment of madness and it’s a lot of ill discipline which is unnecessary. I’d need to see it again. I don’t know how much contact he actually made.

“The performance didn’t merit the result. We were as good as we’ve been here for a long time. Bitterly disappointed night not to have won on a difficult pitch on a difficult night.”

Livingston face St Mirren at Hampden on Sunday for a place in the League Cup final (16:00 GMT), while Celtic have to wait until Wednesday 27 January to host Hamilton Academical (19:45).

The revocation of the Egyptian nationality from Syria, the wife of a “runaway artist”