Lloyds Bank tells most of its 65,000 staff to work from home until SPRING

Lloyds Bank tells most of its 65,000 staff to work from home until SPRING in fresh coronavirus blow for the City

By Emma Dunkley For The Mail On Sunday

Lloyds Bank has told most of its 65,000 staff to work from home until spring at the earliest.

It wants them to stay away from the office for at least the next five months following Government guidance urging employees to work remotely if they can.

The move by the bank will come as a blow to the City of London, where it employs thousands. 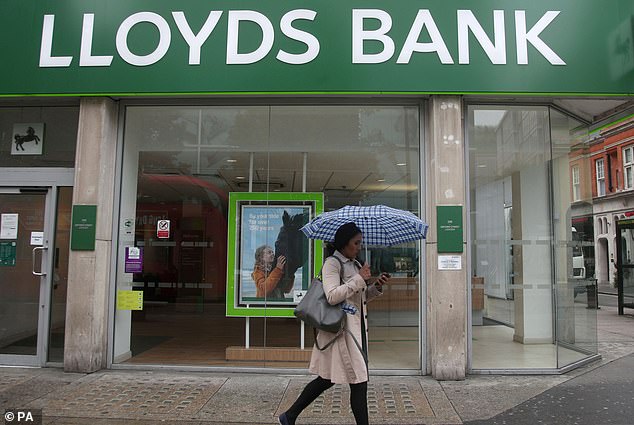 Lloyds Bank has told most of its 65,000 staff to work from home until spring at the earliest. A bank branch is pictured above

About two-thirds are working from home, but staff are still serving customers at its 890 branches.

Lloyds said: ‘In line with guidance from the UK and national governments, and given the majority of our colleagues are working from home, we have asked them to continue to do so until at least spring.’

However, the shift by big businesses to work from home is adding to fears of another recession.

Catherine McGuinness, chairwoman of the City of London’s policy committee, said it was vital to bring people back to offices to support the economy, adding: ‘My big fear is… we may see the economy freezing over the winter, just when we need a recovery for saving jobs.

Banks are boosting their bonus pots as City traders rake in huge profits from turmoil in the markets.

Barclays has bumped up its cash pile for bonuses so far this year to £745 million – almost a tenth more than it set aside for the same period in 2019.

Banks will finalise bonus payouts at the end of the year, but any sign of bumper bonuses during the Covid crisis is likely to be controversial. It will also anger UK bank shareholders, whose dividends stopped in March.

The Bank of England will decide later in the year whether the dividends can restart. Banks were told to drop them to protect against an economic storm.

‘I am really worried about the supporting businesses – the bars, the cafes, the hairdressers – and how they will manage to survive.

‘The economic impact will be phenomenal if we’re not careful.’

Chris Williamson, an economist at the business consultancy IHS Markit, warned: ‘The pace of economic growth slowed in October to the weakest since recovery from the national lockdown began.’

Other large firms are closing offices or asking employees if they want to work from home for ever.

The consultancy Deloitte could shut four offices, which would leave 500 people working from home, and investment manager Schroders told its 5,000 global staff in August they could work where they chose.

Happy mom Carrie Johnson shared a guiding-the-scenes snap of her six-thirty day period-aged daughter Romy at the G7 summit, a 7 days soon after the spouse and children...