For illustrator Gary Andrews, his ‘doodle diary’ is not only an enchanting daily record of family life, but a therapeutic outlet for all emotion, from love and hope to fear and sadness.

When the talented animator started it five years ago on his 54th birthday, as a happily married father of two, his exquisite drawings were filled with gentle humour and sheer delight at his good fortune.

But after the sudden death of his wife Joy, 41, from sepsis in 2017, Gary turned to his diary for solace, pouring his heart out on to the page to capture his grief and the struggle to cope as a single parent.

Two years ago, he shared with the Mail those poignant, intimate and uplifting doodles charting his heartbreaking ‘travelogue’ — leading to the publication last month of his moving book Finding Joy. 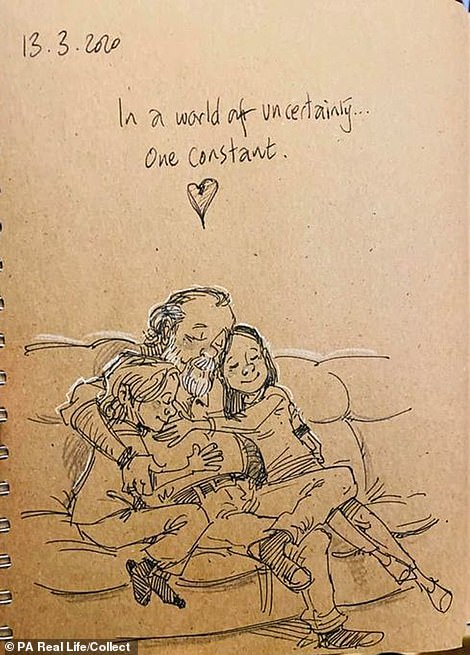 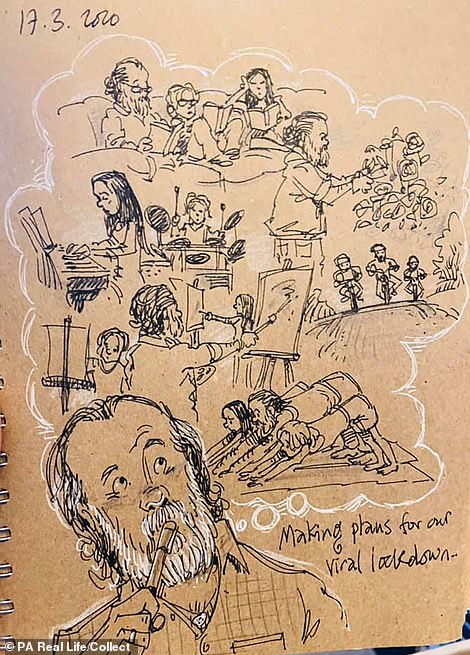 Love is all you need: Gary grows closer to Lily and Ben. (Right) How to fill the days? Gary ponders ways to stay occupied 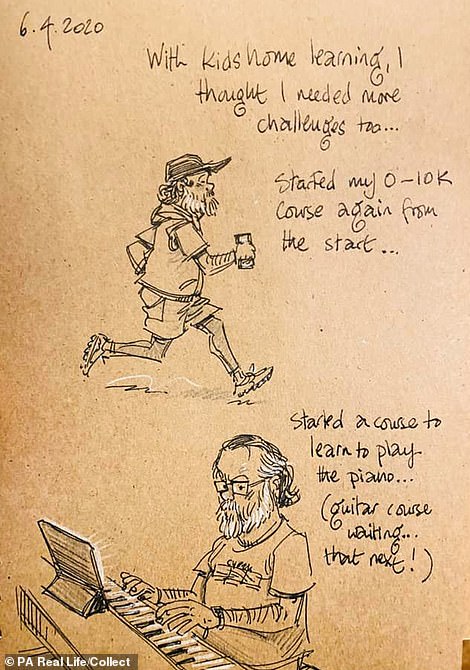 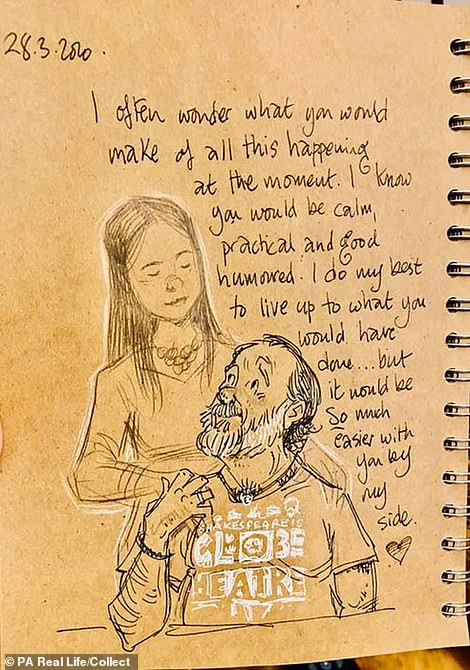 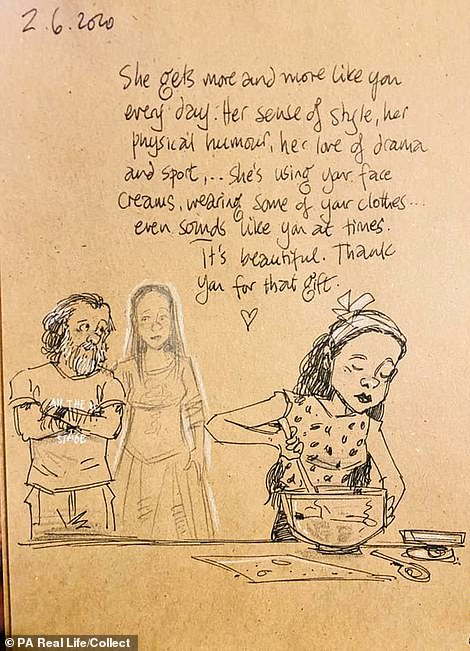 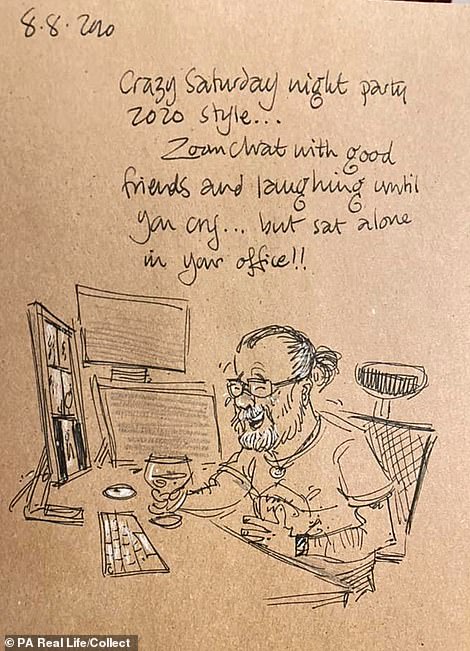 Legacy of Joy: Gary can see so much of his wife in Lily. (Right) Party of one: Gary joins the Zoom revolution in lockdown 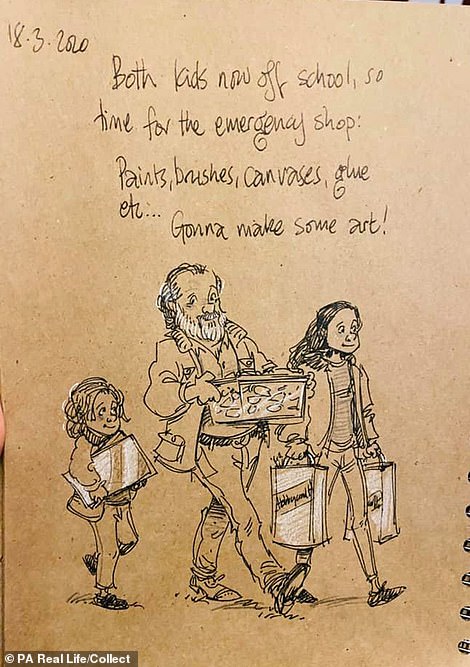 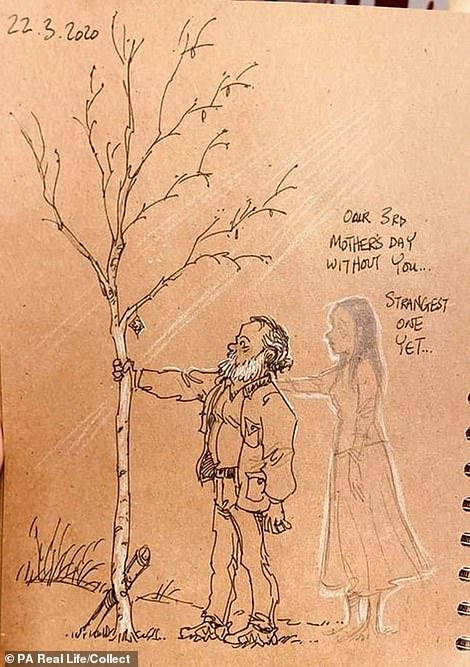 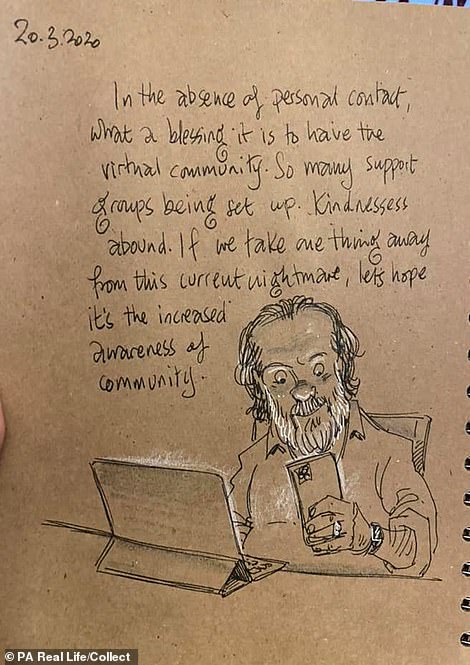 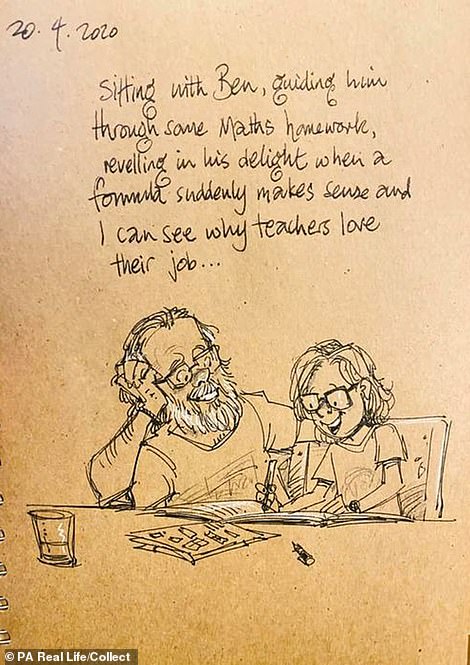 Now Gary, 59, is turning his talents to recording their ongoing journey through lockdown — from snuggling up on the sofa with children Lily, 13, and Ben, ten, to home-schooling.

As always, the ethereal image of his late wife, Joy, is often to be found in the background of his cartoons — her guiding presence in the family’s life as strong as it was before her tragic death.

In one image, Joy appears next to Gary as he watches daughter Lily baking a cake, with the caption: ‘She gets more and more like you every day . . . It’s beautiful. Thank you for that gift.’

Gary says of the Covid pandemic: ‘It has brought the loneliness of not having Joy here back, which was going away before because life was so busy.

‘She still pops up in my drawings — not as much as in the earlier days, when everything was happening for the first time — but she is never going away.’

Of his wife’s untimely death, he adds: ‘When it first happened, the grief was all-encompassing. Her sudden and unexpected death was a massive shock to the system. It totally enveloped me. 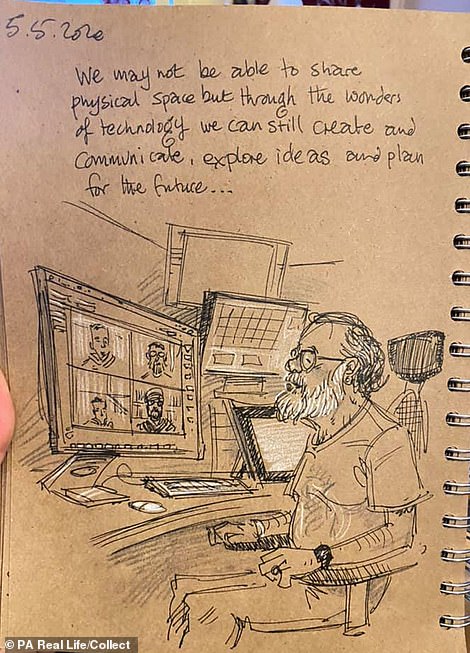 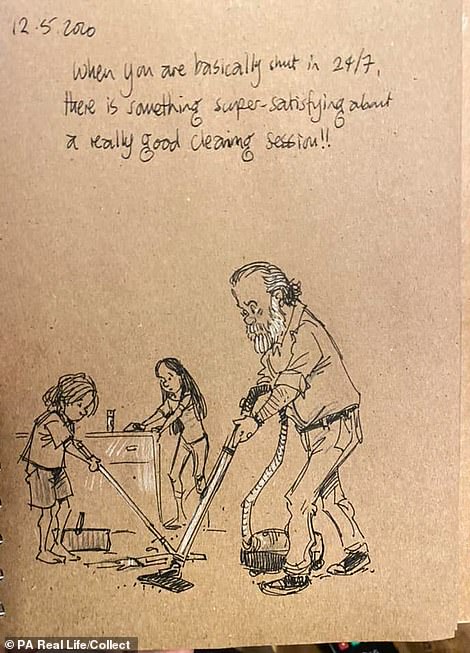 Working wonder: Gary adapts to the new normal. (right) All hands on deck: The family tackles the housework 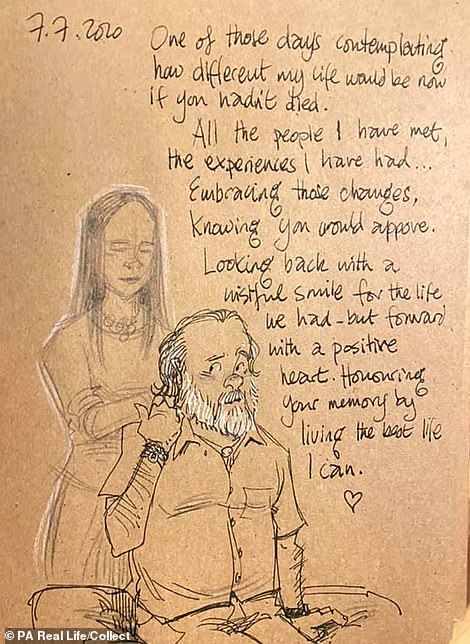 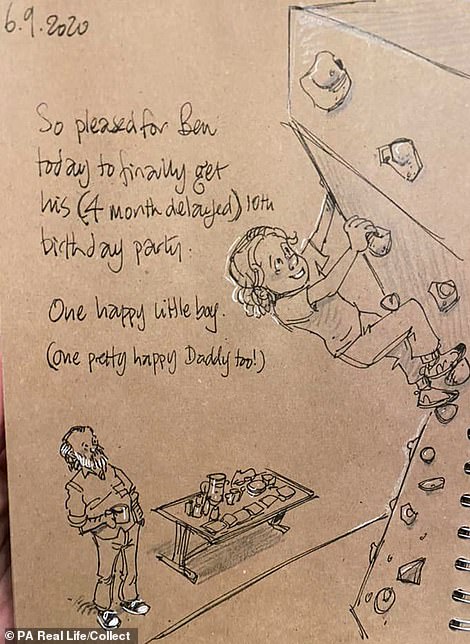 Moving on: ‘She has gone but the love is still there’. (Right) Height of happiness: Ben finally has his birthday party 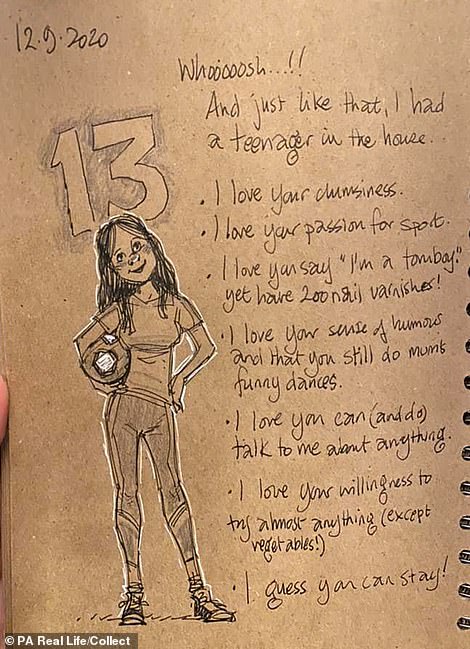 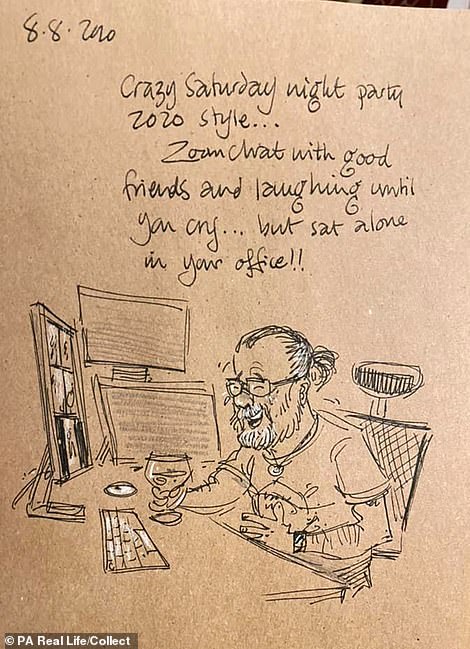 ‘The grief itself you never get over, but you learn to live with it and put it in a place where it’s manageable and you can control it.

‘Now, it sits comfortably and quietly in a little corner — not defining me, but informing everything about who I am.

‘Being a solo parent is hard enough, and to have this pandemic and lockdown thrust upon us is tough, although I know a lot of people have it tougher.

‘It would be nice to have Joy here to bounce ideas off, to share the load, to laugh with, to tag-team the home-schooling with and just to sit on the sofa with in the evening.’

Gary, who lives in Horley, Surrey, lost his ‘soul mate’ of 19 years when Joy fell ill with what they both thought was flu in October 2017. He was away on a week-long work trip to Vancouver, Canada. 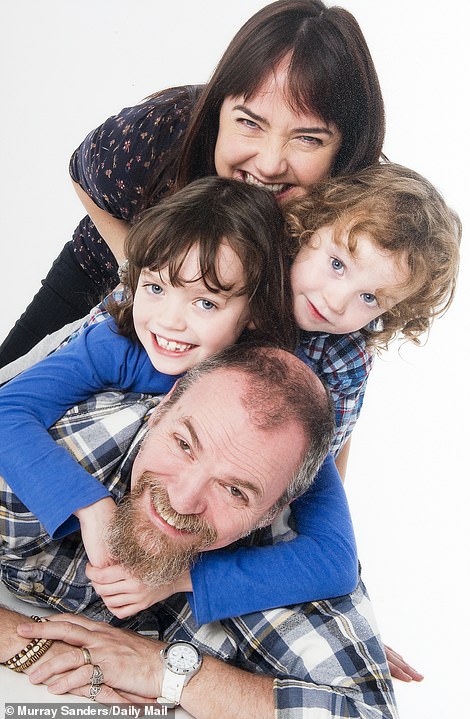 Memories: Gary and Joy, who died in 2017, with their children, Lily and Ben

Rushed to hospital just four days after waving Gary off at Heathrow Airport, Joy died from multi-organ failure caused by sepsis, while her husband was mid-air on an emergency flight home.

That night, as their distraught children slept upstairs, he picked up his diary and — utterly bereft — drew a heart broken in two, from which one teardrop falls.

It would be the first of 700 doodles charting his struggle to fill the gap left by Joy as he embarked on the lonely, but ultimately inspiring, journey from despair to something closer to happiness.

His lockdown doodles now give the sense that, though they will always miss Joy, this little family is doing just fine.

Drawing every night before going to bed, Gary sees his doodles as a way of immortalising the woman he married in 2004, after she graduated from York University where she had studied film, TV and acting.

Before her death, Joy ran a media company with Gary, who has worked as an animator on children’s TV series Fireman Sam and is currently directing Horrid Henry, and he often wonders what she would have made of this tribute to her.

‘The title of the book was a no-brainer. Her name was a gift. For a start, she was so perfectly named, as she was a very joyful person and she brought that feeling to anyone who knew her,’ he says.

‘People have told me the book has helped them navigate their own journey of grief. I’ve had terminally ill people tell me they’ve bought it for their spouses. It’s been unbelievably humbling and beautiful.’

Gary hopes that Joy would have been proud of the way he stepped up to the challenge of bringing up their adored children alone.

‘Lily was ten when Joy died, so she was old enough to be able to process it and understand,’ he says.

‘Now she’s a teen and is dealing with all those things teenagers have to cope with as well as this, but it has made her a very strong and emotionally confident young woman.

‘We can talk about anything. Having to become mum and dad to her means that any kind of barrier there may have been has gone. It’s made for an open and close relationship.

‘He’s developed a dark sense of humour and he’s very funny. His defence has been to stick two fingers up at death, and that’s a pretty valid response.

‘Neither of my children is afraid to talk about what happened, we’re a great little team.

‘What happened could rip you apart, but actually, it has brought us closer because we’ve talked about it and been open. Accepting it and having it as part of your daily experience is really important.’

The publication of Finding Joy, Gary says, was a watershed moment which helped him to feel he was ‘back in the world’ and looking positively to the future.

He says: ‘I feel a bit less of a widower and more of a single person. I’m in a place where I think a new relationship is something I will be happy to consider. It’s a welcome prospect.

‘Intellectually, I had accepted it might happen; now it’s the case that emotionally I’m ready.

‘The love I have for Joy is never going to go away. She’s gone, but that love is still there.

‘That love is now in a particular place, and there’s no reason why someone else can’t come into my life for whom I can have those feelings again.

‘It does not take anything away from the feelings I had before. Falling in love again is not cheating.’

But that’s all in the future, and Gary has lockdown and the pandemic to navigate first.

‘I’ve not signed up for any dating apps. You won’t find me swiping left or right,’ he says.

‘I believe in the old-fashioned, analogue way of meeting people. Perhaps they’re a friend and then suddenly you realise it’s more.

‘That’s how it was with Joy. She was my best friend first and then my beautiful wife.’

The next chapter of Gary’s doodle diaries awaits . . .

For more information, visit garyscribbler.co.uk — you can buy Finding Joy (£16.99, John Murray) at all good bookshops.