London is at risk of being plunged into Tier Three ahead of Christmas because the capital’s Covid outbreak has stalled and cases are no longer dropping rapidly, its head of public health has claimed.

Professor Kevin Fenton sought to pour cold water on the city’s re-surging economy, as he warned the ‘promising reductions’ they were seeing have ‘shown signs of slowing’ in recent days.

Department of Health figures show the number of coronavirus infections being recorded each day plummeted during mid-November but then started to level off on November 23.

But Public Health England data shows in the seven-day spell to November 29, the latest for which data is available, 27 out of the capital’s 32 boroughs recorded falls in their Covid infection rates. Only Camden, Lewisham, Haringey, Bromley and Kingston-upon-Thames saw a spike in cases in the final full week of lockdown.

And NHS numbers reveal daily Covid hospitalisations are stable at just 145 a day, on average. For comparison, they topped 800 during the peak of the first wave in April.

It comes as data today bolstered claims that millions living under the harshest restrictions could be downgraded to Tier Two because infections have fallen in every local authority in the North. But experts warned that ministers were being ‘cautious’ in the run-up to the Christmas break, when it is feared a relaxation could cause a ‘bump’ in infections. 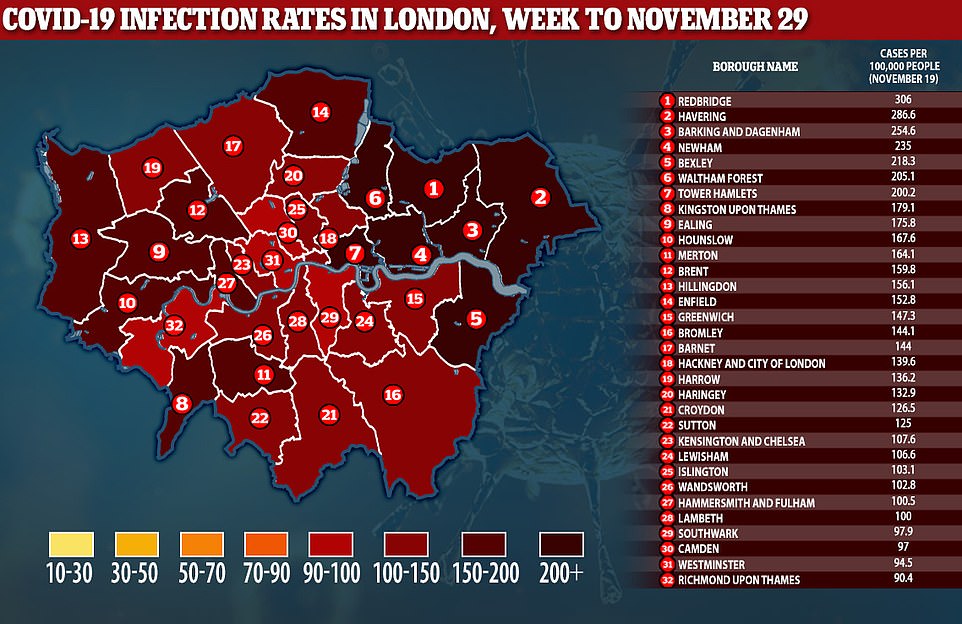 Only five of London’s boroughs saw their Covid-19 case rates rise in the week to November 29. Above is the case rate across London. Four boroughs have less than 100 cases per 100,000 people 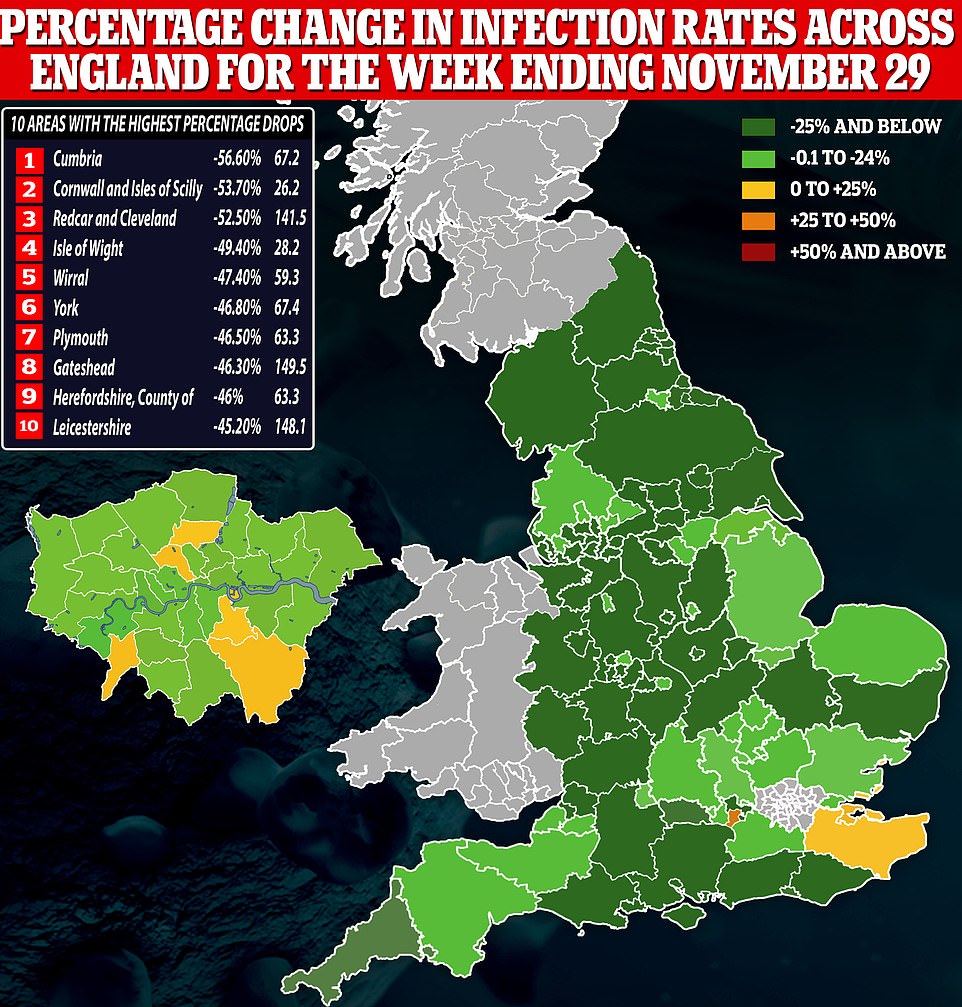 Covid-19 infections by percentage change across England. London has been cut out of the map and placed on the left-hand-side. Only five boroughs saw infections rise in the most recent week 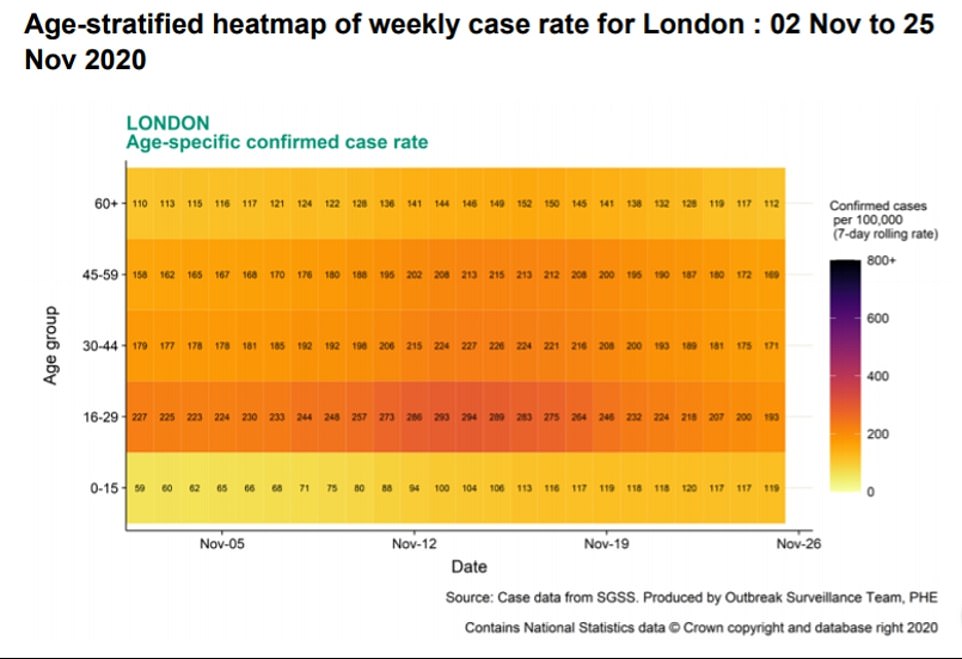 Raising the prospect of Londoners again being banned from pubs and restaurants, Professor Fenton today ordered them to ‘stick to the rules’ and keep to social distancing and self-isolation barely three days after lockdown was lifted.

‘The promising reductions we had begun to see with the recent national restrictions across the capital have shown signs of slowing in recent days – a stark reminder of just how delicate our situation is,’ he said. 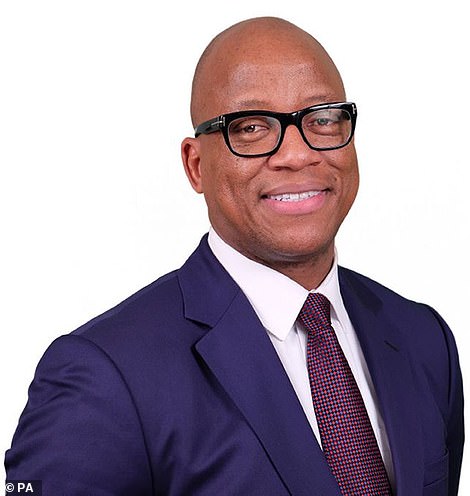 ‘If we want to avoid being placed in Tier Three, it is vital we keep transmission down.’

He added: ‘As we make plans to go out this weekend, whether it’s shopping, eating our or meeting with friends outside, it is vital we remain vigilant and keep in mind that the virus is still present.’

Professor Lawrence Young, an infectious diseases expert at Warwick Medical School, told MailOnline it was a ‘surprising statement’ from the city’s director of Public Health.

‘We’re in a very hyper-cautious state at the moment,’ he said. ‘I think what’s happening here is we are being very very cautious and trying to take no risks really in the run up to Christmas.

‘January and February is a time when the NHS is under a lot of strain. This is another thing everybody is very wary of.’

London’s mayor, Sadiq Khan, rallied behind the capital today as he warned it would be ‘disastrous’ for the city to be moved into the highest tier.

‘I can’t stress this enough: We have to do everything we can to prevent London from moving into Tier Three restrictions,’ he said. ‘This would be disastrous for our city – we cannot risk more lives and livelihoods.’

They have stayed at this level for three days, with 2,013 being the average for November 26, the latest date for which data is available.

The number of Covid-19 patients admitted to hospital in the capital has remained stable, and is no where near the levels seen during the first wave

The capital’s outbreak is focused in the East of the city, according to the latest data from the Department of Health.

Ten London boroughs have weekly coronavirus case rates below 110 per 100,000, with four having rates below three figures.

Public Health England’s report revealed that the highest spike in infections during the fourth week of lockdown, the latest for which data is available, was in Bromley, where they spiked by 11.8 per cent to 142.9 Covid-19 cases per 100,000 people.

There has been mounting fury over slapping entire regions with the same tiers despite stark differences in infection rates.

In Kent, for example, there has been an outcry from local leaders after the entire county was plunged into Tier Three despite its coronavirus outbreak being focused in one area. Swale, which is also the UK’s hotspot, is recording a case rate of 566.4 per 100,000. But in leafy Tunbridge, also in Kent, the rate has dropped to 96 per 100,000. This is lower than many counties in Tier Two.

Boris Johnson hinted last week that town’s and villages near coronavirus hotspots could be lifted out of the toughest measures in plans being drawn up to quell a growing Tory rebellion over restrictions.

Conservative backbenchers have already pointed out that Slough in Berkshire and Scarborough in North Yorkshire have already been ‘decoupled’ from their own regions by being put into different tiers.

The move has prompted experts to accuse ministers of a ‘finger in the air’ strategy when determining tiers for different regions, as the Government is yet to reveal its criteria for moving between tiers.

As many as 55 Conservative backbenchers rebelled against the Government on Tuesday in a vote to bring the tier system into force, in a sign of growing unrest in the party ranks.

WHICH LONDON BOROUGH HAS THE HIGHEST COVID-19 INFECTION RATE?

Data from the Department of Health dashboard was used for this table. Rates are in cases per 100,000 people.

WHICH LONDON BOROUGH HAS THE LOWEST COVID-19 INFECTION RATE?

Data from the Department of Health dashboard was used for this table. Rates are in cases per 100,000 people.

You told us the best websites for online shopping

Teletubbies could be the next to join Bitcoin (BTC) craze 2021

Summer season holidays in danger as ministers threaten to place Spain, France and Italy on a brand new hazard record