Loose Women has received 261 Ofcom complaints after the panellists held an ‘appalling’ debate about Chrissy Teigen’s decision to share pictures after her baby died.

Last week, Chrissy, 34, bravely shared the heartbreaking news that she and husband John Legend had lost their baby, Jack, halfway through pregnancy.

On Thursday’s Loose Women, the panellists were slammed after they held a debate about her decision to post pictures on social media with Carol McGiffin, 60, saying she felt ‘uncomfortable’ and Jane Moore, 58, questioning the timing. 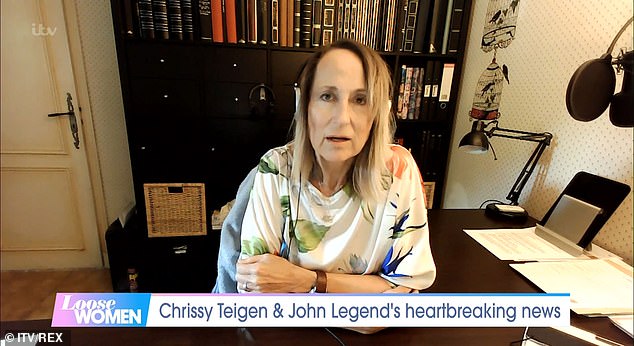 Complaints: Loose Women has received 261 Ofcom complaints after the panellists held an ‘appalling’ debate about Chrissy Teigen’s decision to share pictures after her baby died

Ofcom confirmed to MailOnline on Wednesday afternoon that the ITV chatshow has received 261 complaints following the segment, which fans branded ‘vile’, ‘appalling’ and ‘disgusting’.

During the debate, while the ladies were incredibly sympathetic to the sad news, their words led to impassioned tweets from viewers who said: ‘It’s not for you to comment on how a woman grieves a pregnancy loss.’

Christine Lampard, 41, read out Chrissy’s post in which she detailed being in the ‘kind of pain you only hear about’ after their son passed away.

And while every member of the Loose Women panel were sympathetic to her loss, some felt their opinions on the matter should not have been voiced and that Chrissy’s openness would surely help others in a similar position. 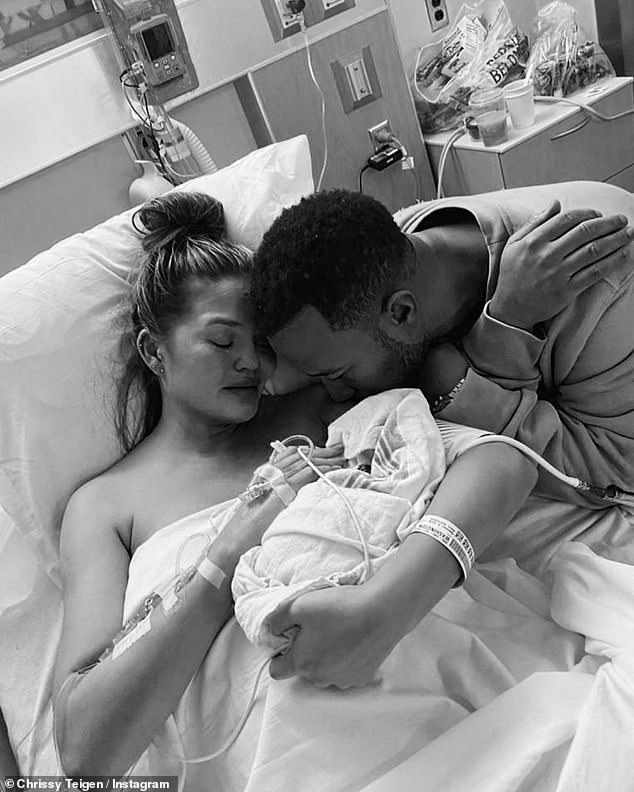 Heartbreaking: Last week, Chrissy, 34, bravely shared the heartbreaking news that she and husband John Legend had lost their baby, Jack, halfway through pregnancy

Nadia Sawalha, 55, admitted that she can relate to Chrissy’s decision to post the images on her Instagram page and she detailed suffering a miscarriage herself.

She called Chrissy and John’s news ‘heartbreaking’ and said: ‘I wonder if they’re in such shock that because they share stuff it’s on a wider level because it’s social media.’

‘I often think about that, it must have really hard for Mark [her husband] because I just did what I needed. We were in the same position even though he hadn’t physically done it.’ 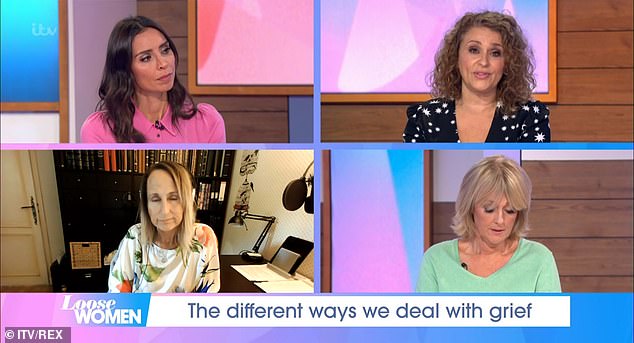 Pain: On Thursday’s Loose Women, the panellists were slammed after they held a debate about her decision to post pictures on social media with Carol McGiffin, 60, bottom left, saying she felt ‘uncomfortable’ and Jane Moore, 58, bottom right, questioning the timing 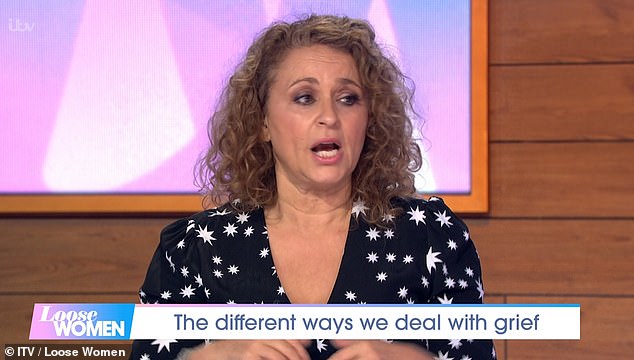 But Carol McGiffin came under fire because while she agreed the news was ‘so sad and so tragic,’ she said she felt ‘uncomfortable’ seeing the pictures which show Chrissy holding her baby in floods of tears with John.

She said: ‘I have to say that I did feel a little bit uncomfortable looking at them because I felt like I was intruding in a way.

‘I know that she’s put them up there and I know that she’s had a lot of followers and fans who care deeply for what’s going on with her whole pregnancy up until yesterday but I just felt like this was not something I should be witnessing. 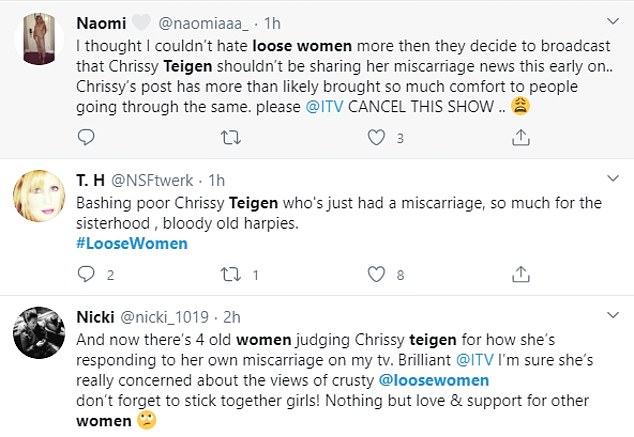 ‘It’s not appropriate’: Viewers felt that it wasn’t anyone’s place to comment on Chrissy’s decision to share her grief and such painful images with the public

‘I’m not judging her and saying that she’s wrong to do it, I don’t know, I just think that it’s such a private thing. I kind of question if there are some things that you shouldn’t have to share on social media.’

Jane Moore, 58, said: ‘Do you think it’s the timing? Because it’s very soon after it happened and I suppose that for me is the most ‘oh’ thing of it.

‘I look and I think, she’s going through the most painful of experiences and I’m thinking, ‘Is she in the right head space of that moment to make that decision to put it out there?” 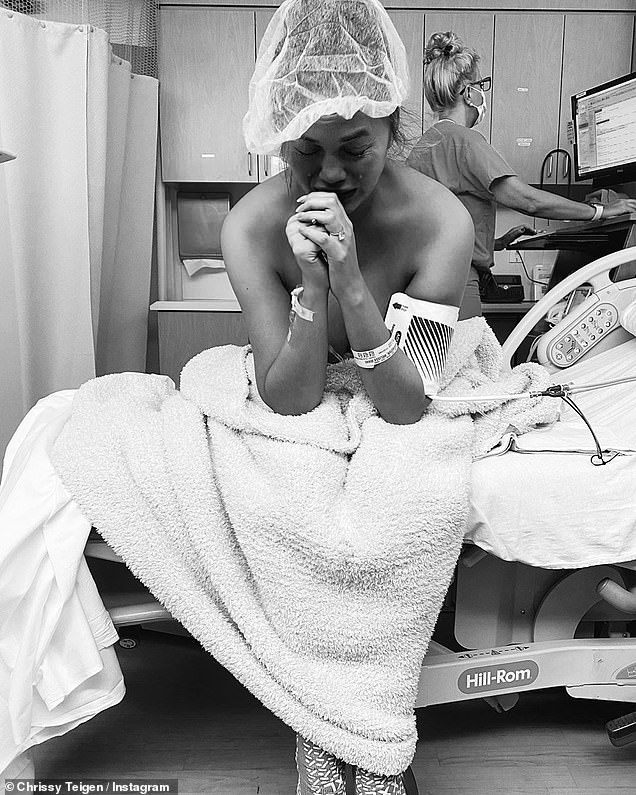 Tragic: Chrissy’s heartbreaking images have garnered sympathy and support across the globe with several celebrities reaching out to the star

Viewers were quick to slam the panellists and the ‘offensive’ debate, one wrote: ‘Not one to complain about a tv show normally, but @loosewomen did you really think it was appropriate to comment on how a woman grieves a pregnancy loss?

‘I’d go as far as to say that Chrissy Teigen is helping more grieving parents with her honesty than you are with your criticism.’

‘Who cares if their pictures make you ‘uncomfortable’, they are the ones grieving – if posting pictures helps & brings them comfort at this tragic time then that’s what they should do. #babylossawareness.’

A different viewer commented: ‘The way loose women spoke about chrissy teigen today was absolutely disgusting. everybody deals with their trauma and grief differently and they shouldn’t be judged for that. vile.’

Another fan said: ‘@ITV You should be ashamed about the way Those disgusting 4 Loose women have just been speaking about John Legend and Chrissy Teign’s sad baby loss.’

While a different account added: ‘I thought I couldn’t hate loose women more then they decide to broadcast that Chrissy Teigen shouldn’t be sharing her miscarriage news this early on.

‘Chrissy’s post has more than likely brought so much comfort to people going through the same. please @ITV CANCEL THIS SHOW.’ 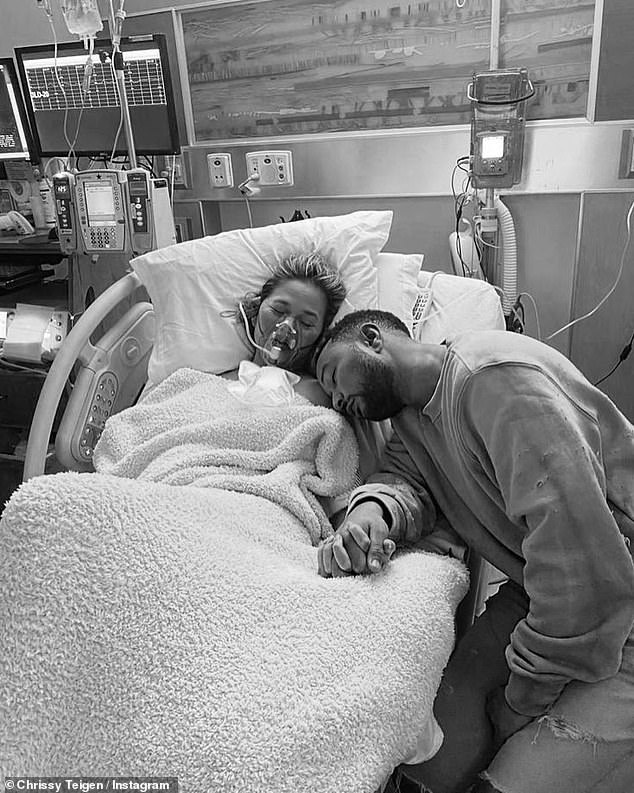 Chrissy had said: ‘We never decide on our babies’ names until the last possible moment after they’re born, just before we leave the hospital. But we, for some reason, had started to call this little guy in my belly Jack’

Chrissy announced she and her husband John lost their baby last week, days after she was admitted to the hospital with severe bleeding.

The model, 34, shared the heartbreaking news with a lengthy post and series of images on social media on Wednesday night, saying their little boy, Jack, has died following ‘so many complications’.

Chrissy wrote in her post: ‘We are shocked and in the kind of deep pain you only hear about, the kind of pain we’ve never felt before. We were never able to stop the bleeding and give our baby the fluids he needed, despite bags and bags of blood transfusions. It just wasn’t enough’.

The devastating post included five black and white photos taken at the hospital, showing Chrissy crying on her bed as well as a shot showing her and John cradling their son. 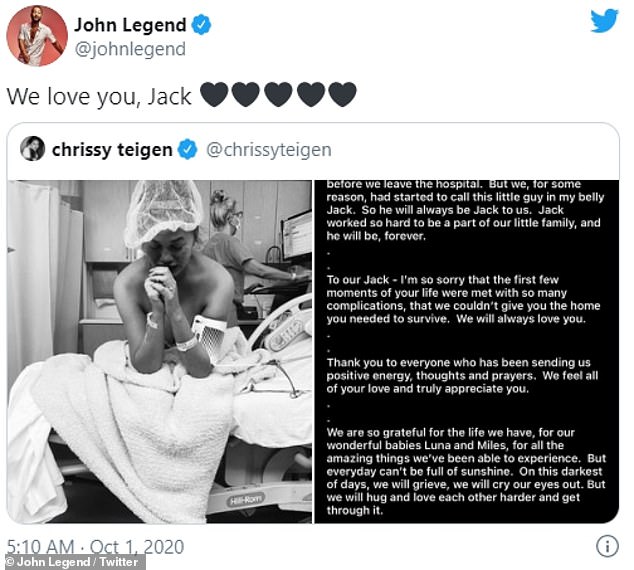 On Monday, Chrissy, who conceived daughter Luna, four, and son Miles, two, through IVF with John, 41, revealed she was on ‘serious bed rest’ due to bleeding and said she was ‘about halfway through her pregnancy’, which is around 20 – 24 weeks. A stillbirth is when a baby is born dead at 24 weeks or later.

In a heartbreaking addition to the post, Chrissy revealed that ‘for some reason’ she and John had begun calling their unborn baby boy, Jack despite only naming their other kids after they were born.

She continued: ‘We never decide on our babies’ names until the last possible moment after they’re born, just before we leave the hospital. But we, for some reason, had started to call this little guy in my belly Jack. So he will always be Jack to us. Jack worked so hard to be a part of our little family, and he will be, forever…

‘To our Jack – I’m so sorry that the first few moments of your life were met with so many complications, that we couldn’t give you the home you needed to survive. We will always love you… 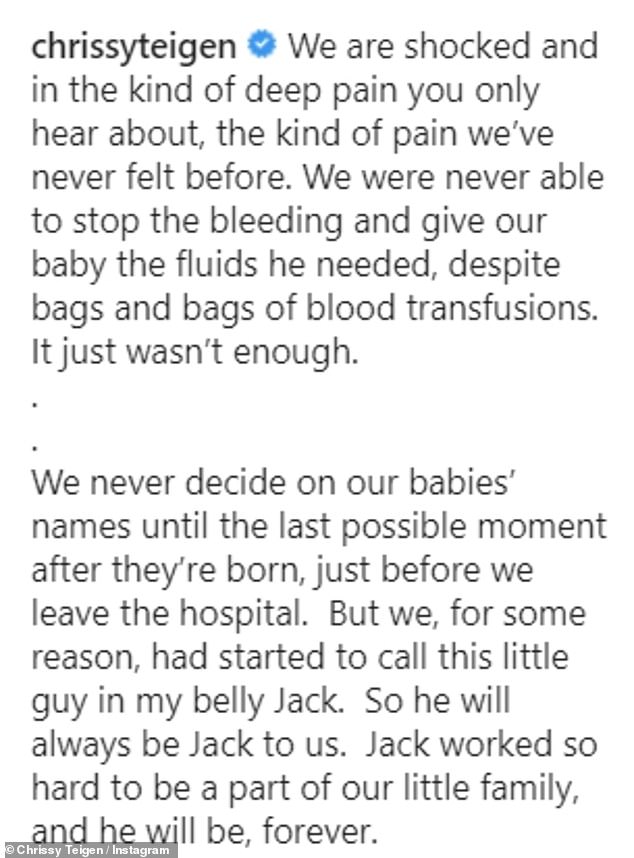 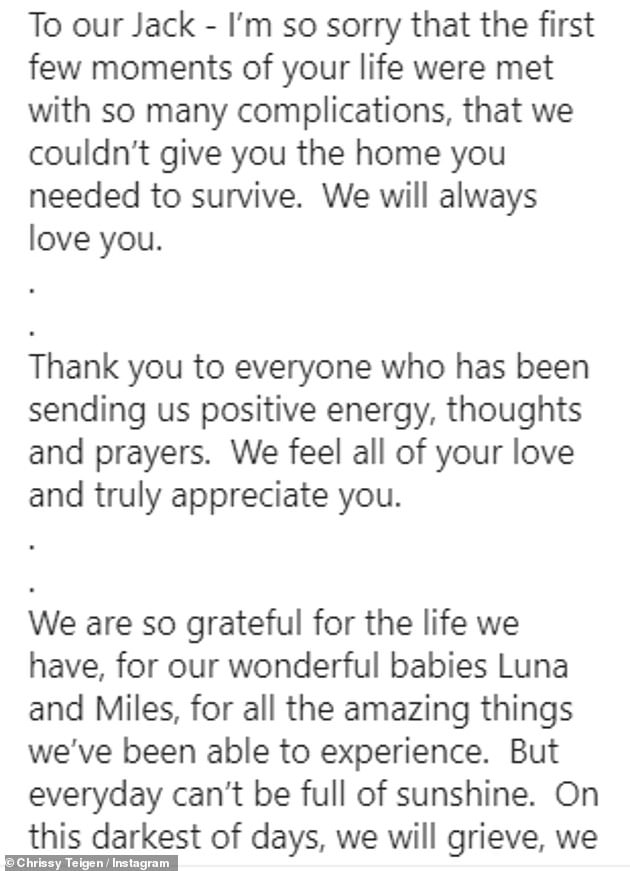 Heartbreaking: Chrissy shared an emotional caption detailing their loss as she thanked fans for their support

‘Thank you to everyone who has been sending us positive energy, thoughts and prayers. We feel all of your love and truly appreciate you. We are so grateful for the life we have, for our wonderful babies Luna and Miles, for all the amazing things we’ve been able to experience.’

Losing a baby past 24 weeks is a stillbirth rather than a miscarriage. If a baby dies before 24 completed weeks, it’s known as a miscarriage or late foetal loss.

Shortly after breaking the tragic news to her followers, Teigen took to her Twitter page to further express her shock from the loss.

‘Driving home from the hospital with no baby. How can this be real,’ she wrote.

The four photos uploaded to Chrissy’s Instagram paint a heartbreaking scene, with one of the pictures showing Chrissy crying and cradling Jack in her arms as John leaned next to them.

WHAT IS A STILLBIRTH?

A stillbirth occurs when a baby is born dead after 24 weeks of pregnancy.

If a baby dies before 24 weeks of pregnancy, it is known as a miscarriage.

Not all stillbirths can be prevented, however, not smoking or drinking, as well as not sleeping on your back and attending all antenatal appointments can reduce the risk.

What are the signs?

Signs may include the baby not moving as much as normal.

Pregnant women should contact their doctor immediately if they notice a difference to their baby’s movement.

What are the causes?

Stillbirths do not always have an obvious cause but may occur due to complications with the placenta or a birth defect.

They are also more likely to occur if women suffer from high blood pressure, diabetes or an infection that affects the baby, such as flu.

Stillbirths are more likely to occur if women are having twins or multiple pregnancies, are overweight, smoke, are over 35 or have a pre-existing condition, such as epilepsy.

What happens after a stillbirth?

If a baby has died, women may wait for their labour to start naturally or they may be induced if their health is at risk.

Bereavement support groups are available to parents who have suffered stillbirths.

Some find it helpful to name their baby or take pictures with them.