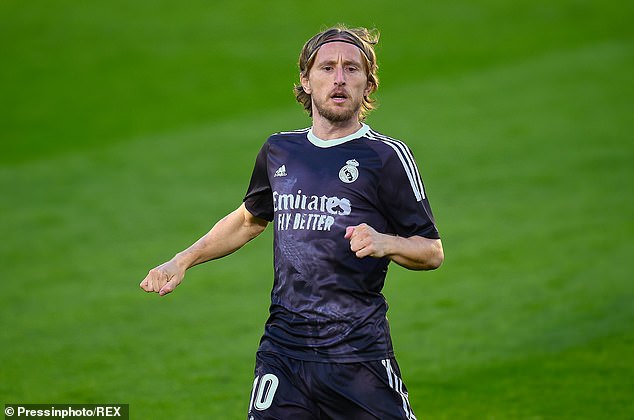 Luka Modric has reiterated his desire to finish his career at Real Madrid but is still unclear whether his wish will come true.

The 35-year-old is in the final year of his current deal at Real and will be able to negotiate a move away from the Bernabeu in January.

The former Ballon d’Or winner has lost his ‘untouchable status under Zinedine Zidane in recent months with the Frenchman seeing Federico Valverde as the Croatian’s successor.

While he remains an important player for Real, Modric only started 22 games in LaLiga last season and has been in Zidane’s starting XI once in three Champions League games this campaign.

And while he admits his future is currently unclear, he remains adamant that he he’s not thinking about leaving the club.

When asked about the matches he has not started, Modric told reporters: ‘I feel good. These games you mention I didn’t play in, it’s the coach’s decision. When I come on, I hope to help the team and do a good job.’

Regarding his future, he added: ‘I feel good, I feel strong, and I still have plenty of football in my legs and strengths to continue, but let’s see what happens in the future.

While he remains an important player, Zinedine Zidane has used him less frequently recently

‘A lot of people are talking and ask about my situation but let’s see what happens. I’m calm. I just want to help the team like always.

‘I’ve said many times and I’ll say it again, I’m very happy at Madrid and I’d love to end my career here, but let’s see what happens.

‘Maybe you thought my answer was a bit cold because I’ve been asked many times and I’ve said the same answer many times. I feel good and I want to stay at Madrid for as long as I feel I can help the team.

‘Who wouldn’t want to end their career at Real Madrid? But it depends on a lot of things. But there is no-one who’d be happier than me to continue at Real Madrid.’

When asked about a potential reunion with Gareth Bale at Tottenham, who is currently on loan at Spurs, Modric ruled out the move claiming he was ‘too old’.

‘I’m too old to go back to Tottenham,’ Modric told FourFourTwo last month. ‘I still have a year left in Madrid and then we’ll see what happens.

‘I feel good and I want to continue playing football for a few more years. I am focused on Madrid and the things we can achieve this season.

‘Afterwards I will sit down to talk to the management, and we will look for a suitable solution for everyone. I have forged a good relationship with all the people of the club and no matter what happens there will be no problem.’