Magda Szubanski has defended her attack on Scott Morrison‘s wife as she unleashed another swipe at the Prime Minister.

The much-loved television personality and comedian landed herself in hot water on the weekend after she retweeted a photo of Jenny Morrison in a high-neck black dress as she watched her husband sign a condolence book for the late Prince Philip.

Szubanski has since defended the controversial tweet that compared Australia’s First Lady to an enslaved woman in the dystopian thriller The Handmaid’s Tale and appeared on A Current Affair on Wednesday night to address the saga.

She claims she didn’t recognise Mrs Morrison without make-up and insisted she wasn’t have a crack at her appearance- but later added the Prime Minister’s wife was ‘fair game’. 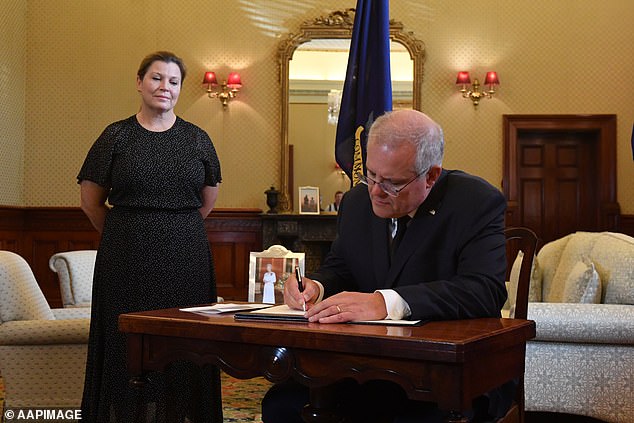 ‘I genuinely, when I first saw, did not realise it was Jenny Morrison, because it looks different for her – she normally has her hair and make-up and the whole thing, and if people can believe me, I’d take a lie detector if they don’t, I didn’t realise it was her,’ Szubanski told host Tracey Grimshaw.

‘I just that it was a strange PR photograph and all I’m suggesting is with that comment. Why would you put something that looks like ‘The Handmaid’s Tale’ as a photo op? Scott Morrison is the master of spin!’

She says many others on social media expressed a similar reaction to the photo.

‘If I was the only one who had that reaction you’d think, ‘Oh, Magda has an angle,’ but heaps of people did,’ Szubanski added.

‘I was actually coming off the back of other people commenting and it took me a while to twig that it was her.’ 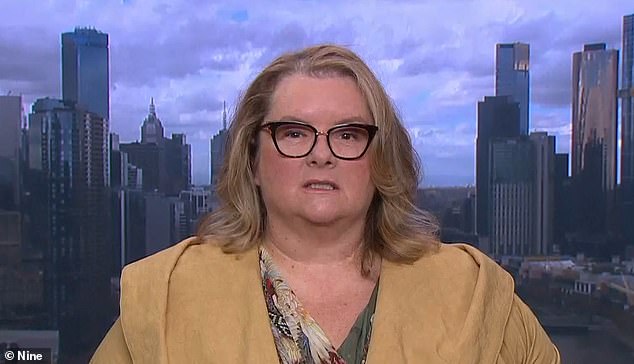 Szubanski reiterated she wasn’t commenting on Mrs Morrison’s appearance but believe the Prime Minister’s wife is fair game for criticism.

‘I can’t prevent other people from saying what they’re saying and I think doing a media pile-on people appearance isn’t something I would condone,’ she said.

That’s why I reasonably quickly said that is not what this is.

‘I’m just saying this as an inept PR photo, and then it developed into this whole other thing.

‘Do I think that a pile-on of Jenny Morrison’s appearance is OK? Absolutely not. But do I think it is legitimate to critique her, yes I do. She is the Prime Minister’s wife.’

‘You can opt in or out of public life and Scott Morrison frequently uses her as a policy advisor. He says, ‘I spoke to Jenny about this and that.’ If she is going to have some sort of influence in public life I want to know what are her values, what kind of woman is she?’ 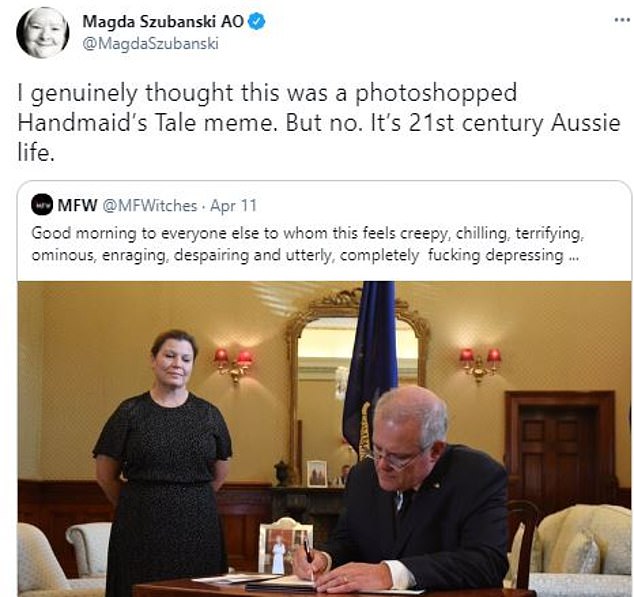 The left-wing comedian had retweeted a photo of Mrs Morrison watching her husband sign a condolence book for the late Prince Philip, captioning the image: ‘I genuinely thought this was a photoshopped Handmaid’s Tale meme. But no. It’s 21st century Aussie life’

Szubanski told the program she was shocked at the backlash the tweet has sparked but insists she was doing ‘okay’ after celebrating her 60th birthday on Monday.

‘I’m becoming Twitter toughened and if you speak up, this is what’s going to happen,’ Szubanski said.

‘What stunned me was this was such a non-event, and non- comment – it was a comment about a photo that I genuinely thought was a meme.

‘I was a bit staggered that I got drawn into this over such a nothing observation that thousands of people had already made on Twitter, made that comment,’

‘I think it’s sort of a fact of 21st century life if you are at all a public person, you do get better at it, but it seems excessive as to what the actual tweet was. It certainly wasn’t at a tirade as it has been called.’

Earlier on Wednesday, Szubanski fired of a series of angry tweets amid growing backlash and argued Mrs Morrison was fair game for criticism because she had ‘opted in’ to public life by offering her husband policy advice. 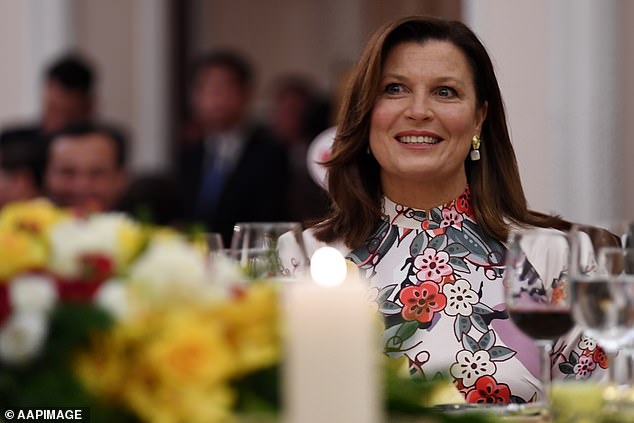 ‘2) I never said a single word about Jenny. 3) why is this headline news when… Christine Holgate is testifying?! Blatant attempt to use ‘sisterhood’ to distract. Now THAT’S appalling.’

She then addressed the paparazzi photos of her, taken on Monday, and denied any suggestion she was ‘walking back’ her initial comments about Mrs Morrison.