Basketball legend Magic Johnson has recalled wanting to hit Howard Stern after the radio and TV personality claimed he had ‘fun getting AIDS’ – and also saying he was ‘blacker’ than him on Johnson’s talk show.

The five-time NBA winner recalled Stern ripping into the way he spoke, his HIV diagnosis and his sex life on the short-lived show ‘The Magic Hour,’ which aired between June and September 1998.

Stern had been booked in a desperate attempt to get ratings Johnson’s show, which was badly struggling at the time. The notorious shock jock had frequently mocked Johnson on his mornings show.

‘So many times, I wanted to say something and hit him at the same time — on air,’ Johnson told Variety, adding the hasn’t spoken to Stern since the notorious interview.

‘It is what it is. I learned a lot from that,’ Johnson said. ‘I’ve never put myself — or HIV and AIDS, or my race — in that position again, ever again.’

‘I was mad when they booked him. But there’s nothing you can do. When people look for ratings, this is what happens.’

While the show was axed for low ratings after just three months, it still provided Johnson with a foot in the door of the entertainment business after he retired from his beloved Los Angeles Lakers for a second time in 1996. 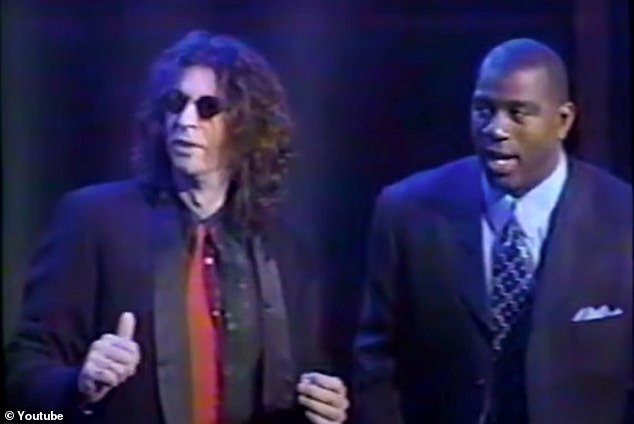 Magic Johnson recalled wanting to hit Howard Stern after hosting him as a guest on his show ‘Magic Hour’ in 1998, back when the famous radio and TV personality made shocking jokes on the five-time NBA champion’s skin color, mannerisms and HIV diagnosis. Pictured: Stern (left) and Johnson on air during Johnson’s ‘Magic Hour’ show , 24 years ago

At one point, during the interview, Stern (left) told Johnson he was ‘blacker’ than him and that he spoke more like a white person. The Sirius XM contributor also told Johnson that he must have ‘had fun getting AIDS’ when evoking the former basketball star’s sex life

The cringeworthy episode goes off the rails from the start.

‘Let’s get right to it,’ Johnson said after welcoming Stern on stage at the start of the interview. ‘Why have you been talking about me so much, man?’

‘The thing you need to work on, in my estimation, is that you’ve gotta stop trying to talk like the white man,’ Stern replied. ‘Everybody’s anti-Ebonics. I say, let it fly! What you need to do, ‘my brotha,’ is to really get down with it. You talk Ebonics all you want.’

Stern didn’t stop there as he continued to associate Johnson’s mannerisms with race.

‘Listen, you’re a Black man. I grew up in a Black neighborhood,’ Stern added. ‘I’m Blacker than you are, trust me. I’m the Blackest Black man you’ll ever meet. And I’m telling you right now, when I lived in Roosevelt, Long Island, which is a Black ghetto, everybody talked like this,’ he said, before imitating the way he think black people speak.

‘I was a big marble mouth, but it was fascinating, because I was one of the people. Why does everybody have to understand every word you say? Who cares what you got to say? No difference what you say.’

Stern eventually moved on to a more touchy subject – Johnson’s HIV diagnosis, which he shared with reporters at a press conference in 1991 press when he first retired from the NBA.

‘You had the life I wanted,’ Stern said later in the interview, talking about Johnson’s sex life before his sexual transmissive infection. ‘These were white chicks? Black chicks? What do we got? What did you prefer? You would have sex with everybody? At least you had fun getting AIDS.’

Johnson remained cool-headed but corrected Stern, informing him that he had HIV, not AIDS, and that ‘nobody has fun’ being diagnosed with either viruses.

‘Believe me, brother, you did. It sounds like fun to me,’ Stern answered. 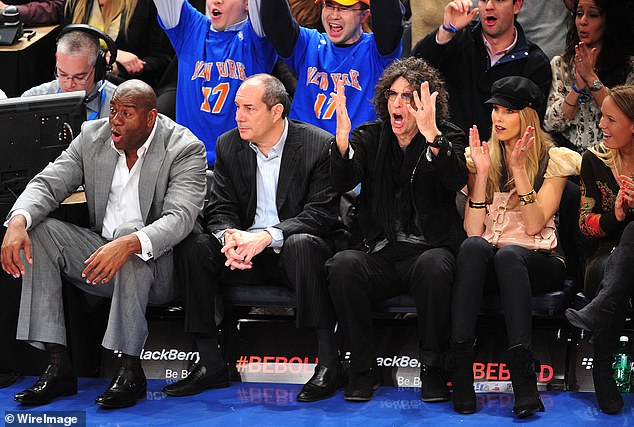 Magic Johnson (far left) and Howard Stern (third from left) attending the Cleveland Cavaliers vs the New York Knicks game at Madison Square Garden in New York City in 2012. Johnson was recalling the 1998 interview he had with the radio personality ahead of the release of a new docuseries called ‘They Call Me Magic’

Johnson, though, wasn’t the only person that Stern made misplaced comments on during his appearance on the former basketball player’s show.

Stern told the former Laker that he lost many basketball games against ‘midgets.’

In another segment of the interview, the Sirius XM host also went off on Sheila E., the night show’s bandleader, commenting on her breasts.

‘Sheila, you take off your top. Go kiss another girl in the band. Give us some lesbianism,’ he said.

Johnson was speaking to Variety ahead of the release of a new docuseries about him called ‘They Call Me Magic,’ that will be available to watch on Apple+ on April 22.

The euro accentuates its fall and is clearly below 1.10 dollars

The euro accentuates its fall and is clearly below 1.10 dollars