By Mail on Sunday Comment for the Daily Mail

How is it possible that under a Conservative Government the pestilent agenda now known as ‘Woke’ continues to advance, apparently unstoppable?

When Left- wing parties are in charge, they ruthlessly use all their powers of patronage and subsidy to pack state institutions with their friends.

They offer endless encouragement to the spread of revolutionary ideas through schools, universities and of course the BBC. 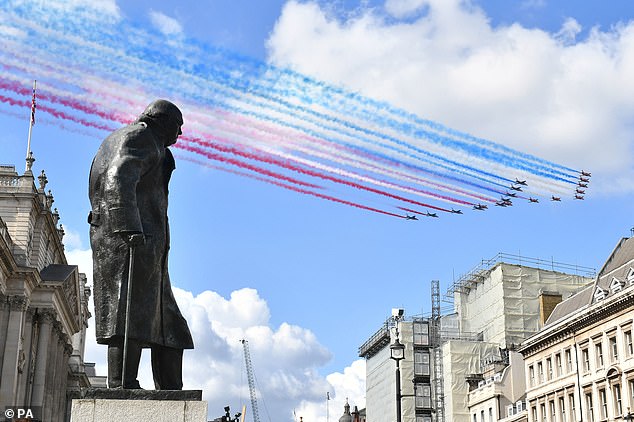 The Churchill-haters and despisers of Britain continue to advance in education and broadcasting. The Red Arrows are seen flying over London alongside their French equivalent in June

Yet when such Governments are rejected at the polls by hefty majorities, there is no matching counter-revolution.

The Churchill-haters and despisers of Britain continue to advance in education and broadcasting. And charities continue to be politicised, always in a Leftward direction, more or less totally unrestrained by the Charity Commission.

So we applaud the Tory MPs who have written to Boris Johnson asking him to defend the British heritage that he often praises. But they want him to use more than words.

They urge that the Government deploys its financial power, of grants and subsidies, to combat such political posturing.

There is a lot of force in this. There is no public demand for these Marxist rewritings of history. Such campaigns are driven by small groups of zealous London radicals who know perfectly well that such interventions do eventually change the national mind.

If you pester and badger people enough, especially where they are not on guard against such manipulation, you will achieve your aim.

For that reason alone the Prime Minister should heed this plea. Woke is no joke. The endless salami-slicing of our traditions and history works all too well.

The radicals’ aim is to ensure that the future belongs to them. To fail to oppose it is to hand the country over to the Left, without a struggle.