An urgent health alert has been issued after two passengers arriving from a ‘red zone’ country were allowed to mingle with travellers heading to New Zealand at Brisbane Airport in a major coronavirus breach.

The duo had returned from Covid hotspot Port Moresby, Papua New Guinea, on Thursday morning and were then allowed to head to a cafe and a retail outlet at the airport for almost two hours before authorities discovered the breach.

One has since tested positive to the virus.

The passengers were at the airport’s Hudson Cafe at the same time almost 400 ‘green zone’ travellers were preparing to fly out to New Zealand. 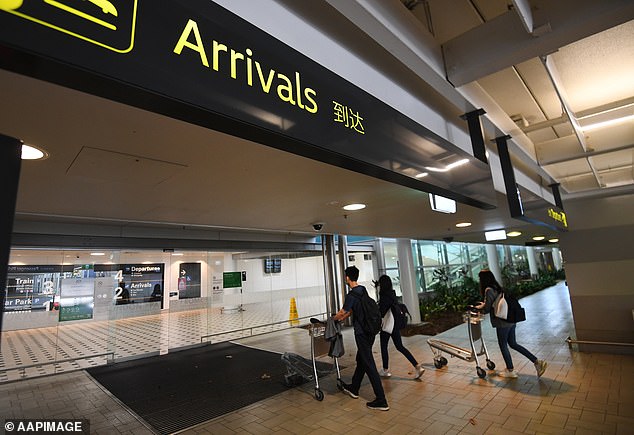 The Brisbane Airport Corporation has blamed ‘human error’ for the breach, with an investigation involving Queensland Health underway into why the passengers were allowed to head to the cafe.

BAC said it ‘unreservedly apologises for this human error’.

‘At approximately 9:30am, two transit passengers arrived on a “red” flight from Port Moresby and proceeded through screening to transit as per normal process,’ the airport said in a statement.

‘The passengers then used the bathroom and attended another retailer before they were located by BAC staff and returned to the “red zone”. They were in the green zone for just under two hours.’

New Zealand’s Ministry of Health has told travellers arriving in the country from Brisbane to monitor their health for the next 14 days.

‘The reported incident was in the Hudson Café in Brisbane airport where two individuals from a red zone country were in the café at the same time as green zone passengers. The risk has been assessed as low,’ the ministry said in a statement.

‘The Ministry understands the two red zone passengers returned negative results prior to departure from their home country. A second test result from swabs taken today has returned a weak positive for one test and a negative result for the other.’

The health alert covers passengers on Air New Zealand flight NZ 202 from Brisbane to Christchurch which arrived about 4.30pm on Thursday.

‘Queensland Health have informed the Ministry that the two red zone passengers were wearing masks, maintaining social distancing and are not symptomatic. Additional testing is being coordinated by Queensland Health,’ the statement said.

BAC added ‘thorough cleaning of all areas (have) since been conducted, and we can confirm all workers and passengers within the green area were wearing PPE’.

‘There is widespread community transmission of Covid-19 across a number of districts and provinces. It is a serious health risk and is impacting the capacity of local health services,’ the Australian Government said.