The COVID-19 pandemic could force some 20 million girls in the developing world to return to their homes and help support their families, likely denying them an education for life, activist Malala Yousafzai told Apple CEO Tim Cook.

Yousafzai and Cook also spoke of their shared love for the comedy series Ted Lasso, which streams on Apple TV+.

The two chatted for a feature released on Thursday by British Vogue.

Yousafzai, the 23-year-old Nobel Prize laureate, was shot in the head by a Taliban gunman at the age of 15 after campaigning for girls to be educated in her native Pakistan. 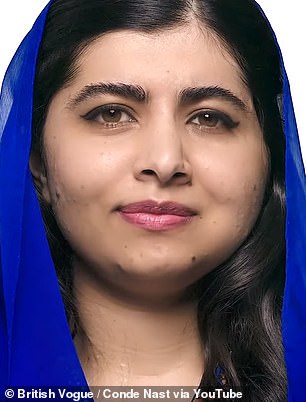 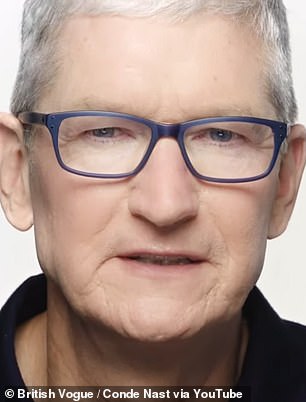 The COVID-19 pandemic could force some 20 million girls in the developing world to return to their homes and help support their families, likely denying them an education for life, activist Malala Yousafzai (left) told Apple CEO Tim Cook (right)

Despite the tragedy, she told Cook she is eager to return to her native country after travel restrictions, which were first put in place due to the pandemic, are finally lifted.

The iPhone maker has partnered with Yousafzai to help promote the Malala Fund, a nonprofit that seeks to ‘champion every girls’ right to 12 years of free, safe, quality education.’

In the video put out by British Vogue, Cook asks Yousafzai how much progress has been made toward the fund’s goal of educating 130 million girls worldwide.

Yousafzai said that while ‘we have seen progress over the past 20 years’ that has been ‘steady and slow,’ the COVID-19 pandemic has ‘drastically’ changed the situation. 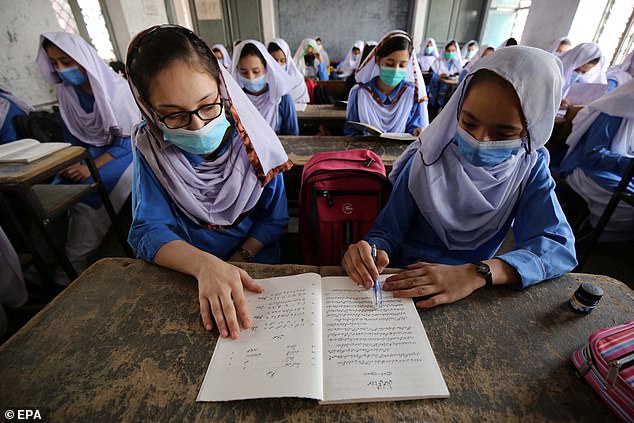 The iPhone maker has partnered with Yousafzai to help promote the Malala Fund, a nonprofit that seeks to ‘champion every girls’ right to 12 years of free, safe, quality education.’ The image above shows young students in Peshawar, Pakistan on Wednesday

‘These girls are now in their homes and they now have more family work to do,’ Yousafzai said.

She added: ‘All these girls are pushed into early child managers and many of these girls may never be able to return to school.’

Yousafzai said her organization’s research shows that this is what happened to girls during the Ebola outbreak in Western Africa nearly a decade ago.

‘This is the fear that I have for girls – they will lose their education because of this pandemic,’ she said.

Yousafzai said that post-pandemic education will rely more heavily on technology, which she says will put girls at a disadvantage.

‘The challenge ahead is to ensure that education is inclusive,’ she said.

Yousafzai told Cook that she plans to visit Pakistan after the pandemic.

‘It is just beautiful,’ she told Cook.

‘I miss my hometown, Swat Valley. Just seeing those mountains and lush green hills and rivers again – that’s something that when I was there in Pakistan I took for granted.’

She added: ‘When you go around the world and visit other countries, you realize that beauty of nature is not in every place.’

‘I would love to go to Pakistan, and I’d want to travel anywhere, to be honest, after this pandemic,’ Yousafzai said.

She said she’s a ‘big fan of comedies and documentaries and movies and cartoons – and that’s what I’m hoping to create.’

Cook and Yousafzai said they were entertained during the pandemic by watching their favorite show, Ted Lasso, which streams on Apple TV+. The lead character played by Jason Sudeikis is a small-time soccer coach from the US who runs a professional team in England despite having no experience. From left: Nick Mohammed, Sudeikis, and Brendan Hunt

The former Saturday Night Live star plays a small-time soccer coach from the US who runs a professional team in England despite having no experience.

During the pandemic, Sudeikis’ ‘joyful’ character brought ‘so much laughter and joy into your life,’ according to Yousafzai.

Lasso ‘makes you giggle’ because ‘you love his sense of humor.’

‘It was emotionally moving as much as it was funny,’ she said. ‘I binge-watched it, and I was up until 3am watching it!’

Cook agreed, saying that he couldn’t wait for the second season.

‘It was my favorite show during the pandemic,’ the Apple boss said.

‘It made me feel light and happy and optimistic, despite the news of the day.’

Chicago police officers on Monday surprised a group of children with a new basketball hoop –...