Male model, 29, who fractured his boyfriend’s skull and tried to strangle him AVOIDS jail


A jealous male model who fractured his boyfriend’s skull, tried to strangle him and stamped on his chest has avoided prison after a judge said he been ‘soul searching,’ to address his violent rage.

Ashley Campbell-Gordon, 29, threw his partner Benjamin Heaton against a wall at Manchester’s Chinawhite nightclub, having grown jealous after watching him pass a business card to a friend.

His partner was left unconscious and with blood ‘pouring,’ out of his ear, witnesses said.

Despite attacking his partner on two more occasions and admitting a charge of actual bodily harm, Campbell-Gordon, who has been in custody since August, has avoided an immediate prison sentence.

He was instead given a 12-month prison term, suspended for two years as a judge said he had been ‘soul searching,’ while in custody.

Judge Elizabeth Nicholls accepted his remorse and said she was giving him an ‘opportunity as well as punishment.’

The judge told Campbell-Gordon, who has been in custody since August: ‘These are ugly and a very worrying series of offences which all seem to have their roots in drink and domestic violence which is a great concern for this court.

‘You savagely pushed your partner against a wall causing him very unpleasant injuries including a fracture to his skull. It was an atrocious offence and yet there were two further incidents of domestic violence in which you tried to strangle him.’ 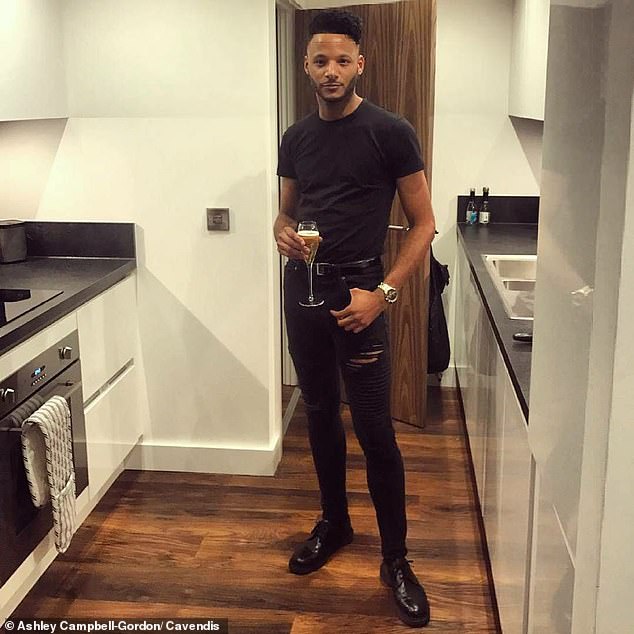 Blood was said to be ‘pouring’ out of Ben Heaton’s ear after he was thrown into a wall at Chinawhite in Manchester. Ashley Campbell-Gordon’s own father accepted alcohol can lead him to bouts of ‘aggression and temper’

In a separate attack Campbelll-Gordon stamped on Mr Heaton’s chest and throttled him during another row at their apartment. He subsequently kicked the victim to the stomach and ripping his Gucci necklace from his neck.

Mr Heaton only managed to escape by running to the balcony and locking himself out whilst he called his parents to rescue him.

He suffered a fractured temporal bone and dislocated shoulder during the first assault but it is not known whether he suffered any injuries in the other assaults.

Despite the series of assaults, and admitting to causing actual bodily harm, Campbell-Gordon, from Salford, was given a 12-month prison term, suspended for two years.

Judge Nicholls added: ‘You are an intelligent young man who has spent the last few months soul searching in custody and I hope you have therefore arrived at a very significant point in your life – it is often called a turning point. You have a supportive family and are a prime candidate for rehabilitation. 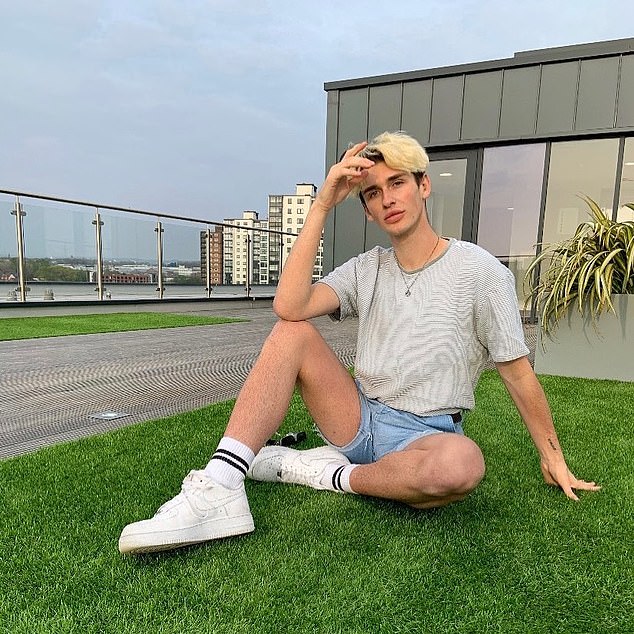 Campbell-Gordon who worked as a restaurant manager but also described himself as a male model, actor and social media ‘influencer’ had been in a ‘toxic’ on-off relationship with Mr Heaton (pictured) since May last year 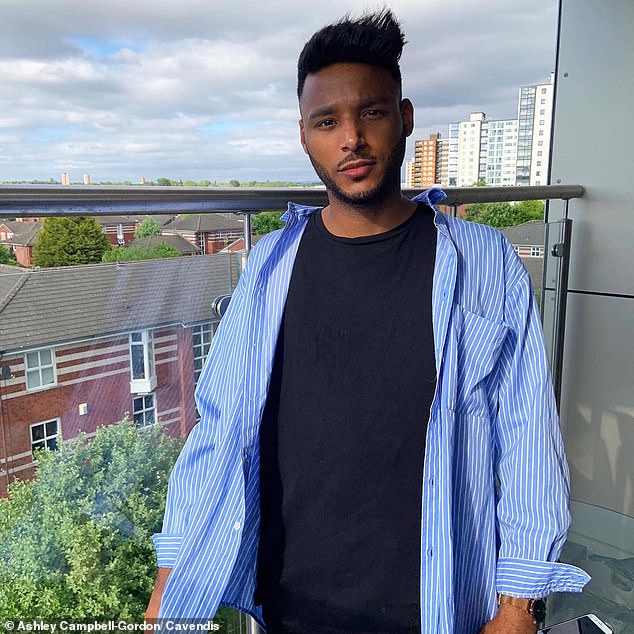 In a separate attack Campbelll-Gordon stamped on Mr Heaton’s chest and throttled him during another row at their apartment. He subsequently kicked the victim to the stomach and ripping his Gucci necklace from his neck.

‘Your father says drinking does not sit well with you and obviously leads to outbursts of aggression and temper. You have spent time soul searching and you have realised there are issues in your life and that you do have problems you must address.

‘You must address those if you want to go on and be able to have ordinary loving caring relationships which I have no doubt you would wish to have. This is an opportunity as well as a punishment. ‘

The court heard Campbell-Gordon who worked as a restaurant manager but also described himself as a male model, actor and social media ‘influencer’ had been in a ‘toxic’ on-off relationship with Mr Heaton since May last year.

The first incident occurred on November 7 last year after the pair had been clubbing at Manchester’s trendy Chinawhite nightspot with another couple. 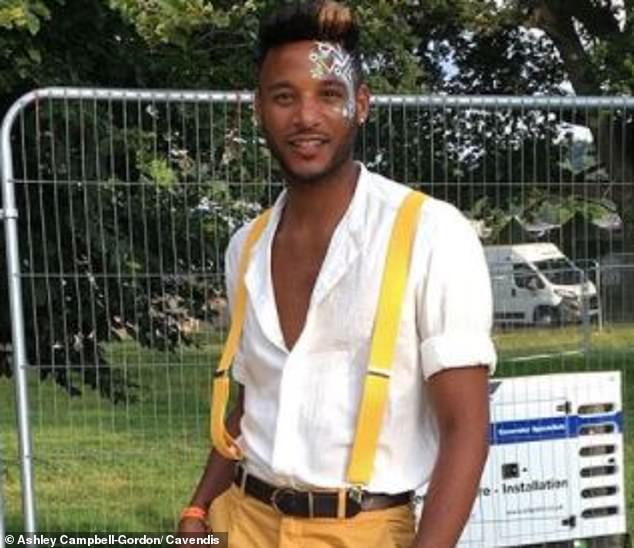 Miss Kate Gaskell prosecuting said: ‘As they were about to leave the club, Mr Heaton stayed behind and spoke to a manager at the club, passed him a business card and the defendant became jealous of this interaction.’

The court heard an argument erupted and the defendant grabbed hold of his partner by the neck, spun him round and slammed him into a wall face first.’

The impact against the wall caused Mr Heaton to fall backwards and hit his head on the concrete and blood was said to be ‘pouring’ out of his ear as he lay unconscious on the ground.

Their friend tried to intervene but Campbell-Gordon pushed her to the floor, breaking her ring finger in the process.

Mr Heaton declined to give a victim personal statement to police but the other victim said: ‘This incident impacted me greatly. I’ve known Ashley for years and I never thought he was capable of this.

‘Seeing a friend slammed into a brick wall is the most violent thing I’ve ever seen, it made me cry. I trust men less and feel less comfortable around them.’

The court heard Campbell-Gordon went on to assault his boyfriend on two further occasions after they resumed their relationship as Mr Heaton ‘felt sorry for him, wanted to forgive him’ and said he ‘still loved him.’

They moved in together in June and found new accommodation in July this year, but the relationship was ‘still punctuated by violence’. 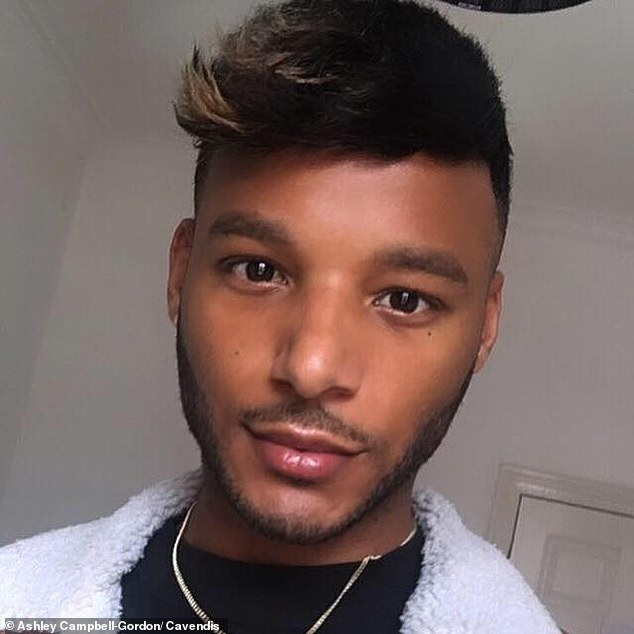 The couple moved in together in June of this year, but the relationship was still ‘punctuated by violence,’ a sentencing hearing was told

On August 14 they had been on a night out and had an argument which resulted in Campbell-Gordon kicking his boyfriend to the stomach and ripping his Gucci necklace from his neck.

Two weeks later they were out with friends before returning to their flat where Campbell-Gordon punched Mr Heaton and strangled him before stamping on his chest and head area.

Mr Heaton begged him to stop and saying Campbell-Gordon was killing him only to get the reply: ‘I don’t care’. The victim broke free and sheltered on the balcony whilst he made his SOPS call. The couple have now split up.

In mitigation defence lawyer Richard Orme said: ‘This was a toxic relationship due to insecurity, jealousy, emotional instability and fuelled by drink. At the time he was working as a manager in the hospitality industry and had everything going for him.

‘That one push had arisen as a result of his partner having given a card to another male in Chinawhite.

‘It was a lover’s tiff that descended into this defendant pushing him into a wall. No one in this court is more remorseful for that single push than he is, and he has suffered for that.’

Campbell-Gordon was also banned from contacting Mr Heaton for four years under the terms of a restraining order.

He was also ordered to complete 30 days of rehabilitation activity requirements.

Is football’s racism battle being lost on social media?