The man arrested over the road rage shooting death of six-year-old Aiden Leos after a weeks-long manhunt is a 24-year-old gun-toting auto shop worker.

Marcus Anthony Eriz and his girlfriend Wynne Lee, 23, were taken into custody outside their home in Costa Mesa, California, on Sunday over the May 21 shooting.

The California Highway Patrol said the pair are expected to be charged with murder over the shooting on the 55 Freeway in Orange County.

Officials said Eriz was the shooter and Lee was driving the vehicle at the time of Aiden’s death.

Orange County District Attorney Todd Spitzer said in a press conference Monday afternoon that the driver and the shooter are likely to face different charges.

Both the murder weapon and the vehicle they were traveling in have been recovered, he said. They were found at different locations to where the suspects were arrested. 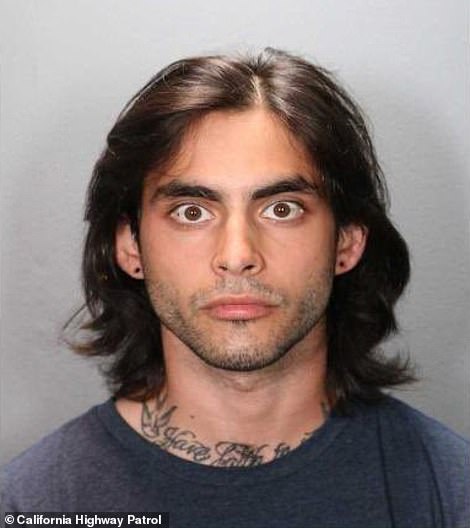 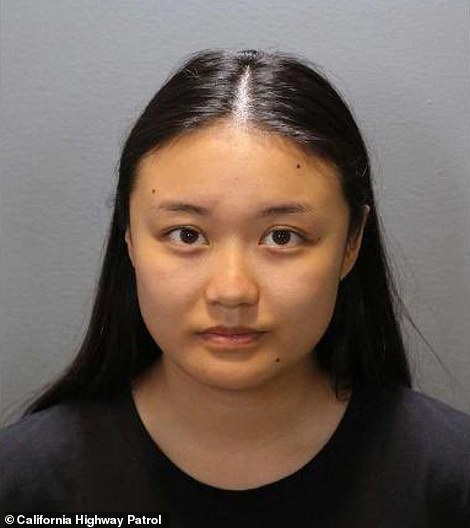 Marcus Anthony Eriz, 24, (left) and his girlfriend Wynne Lee, 23, (right in mugs) were taken into custody Sunday over the May 21 shooting death of Aiden Leos 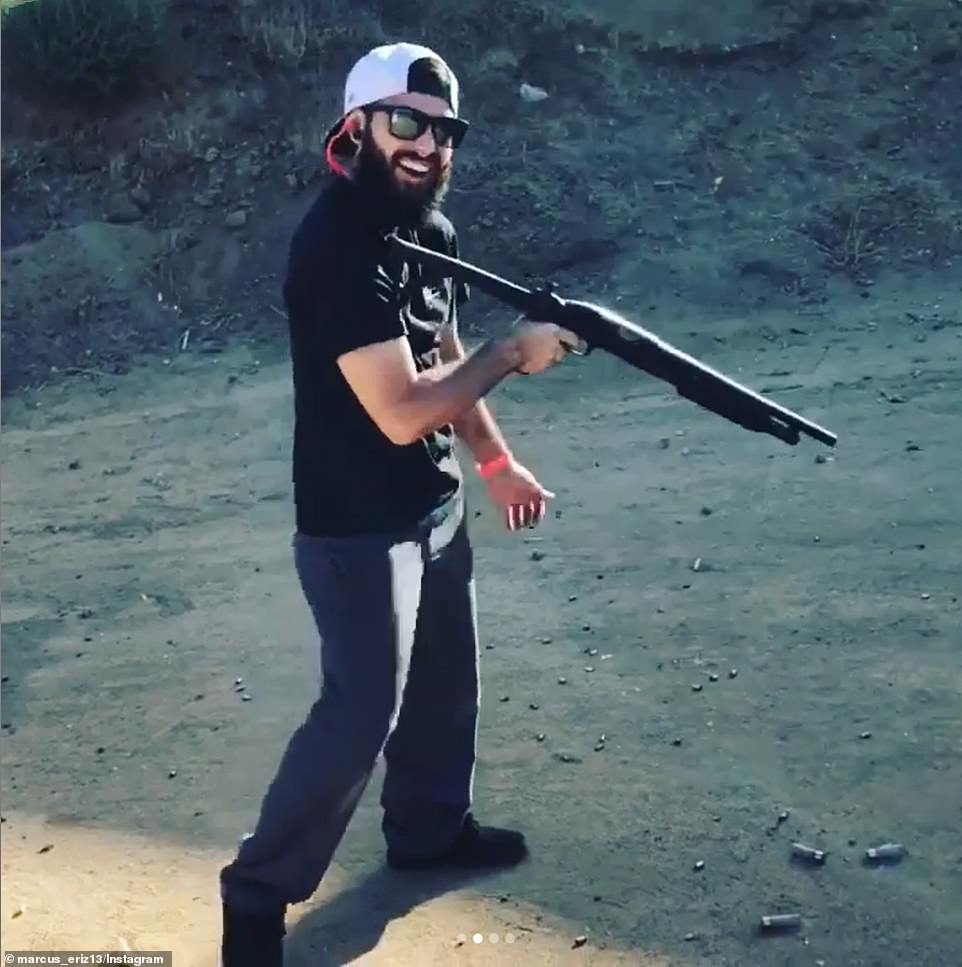 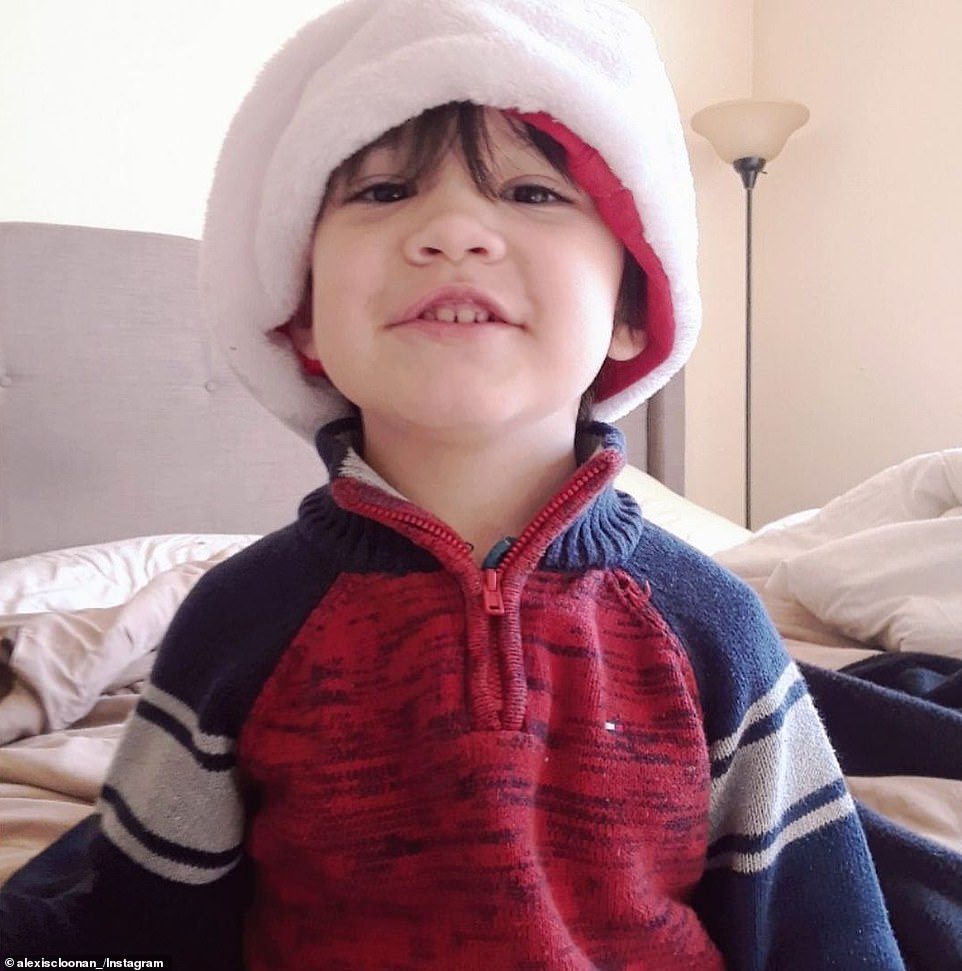 Aiden Leos was fatally shot while sitting in the backseat of his mother’s car on 55 Freeway in Orange County, California back on May 21

Neither Eriz or Lee are believed to have prior felony convictions, according to online records.

Eriz appears to be a gun fanatic with his social media filled with photos of him showing off his guns and firing them at shooting ranges.

In one photo, Eriz displayed two handguns and a rifle. In another photo, he showed off his ammunition.

It is not clear what type of firearm was used in the shooting of the six-year-old boy or whether or not it may be any shown in his social media.

Eriz works in an autobody shop, according to jail records and his social media accounts.

The owners of Platinum Collision, an auto body shop in Corona, told ABC7 he had stopped working at their business in January.

His girlfriend, who is listed as unemployed on jail records, is the daughter of Taiwanese immigrants who grew up in the San Gabriel Valley.

Her presence on social media is virtually non-existent.

Officials said Eriz and Lee had been under surveillance prior to their arrests.

They had received numerous tips from the public over the case and had also been able to enhance an image of the license plate on the couple’s vehicle. 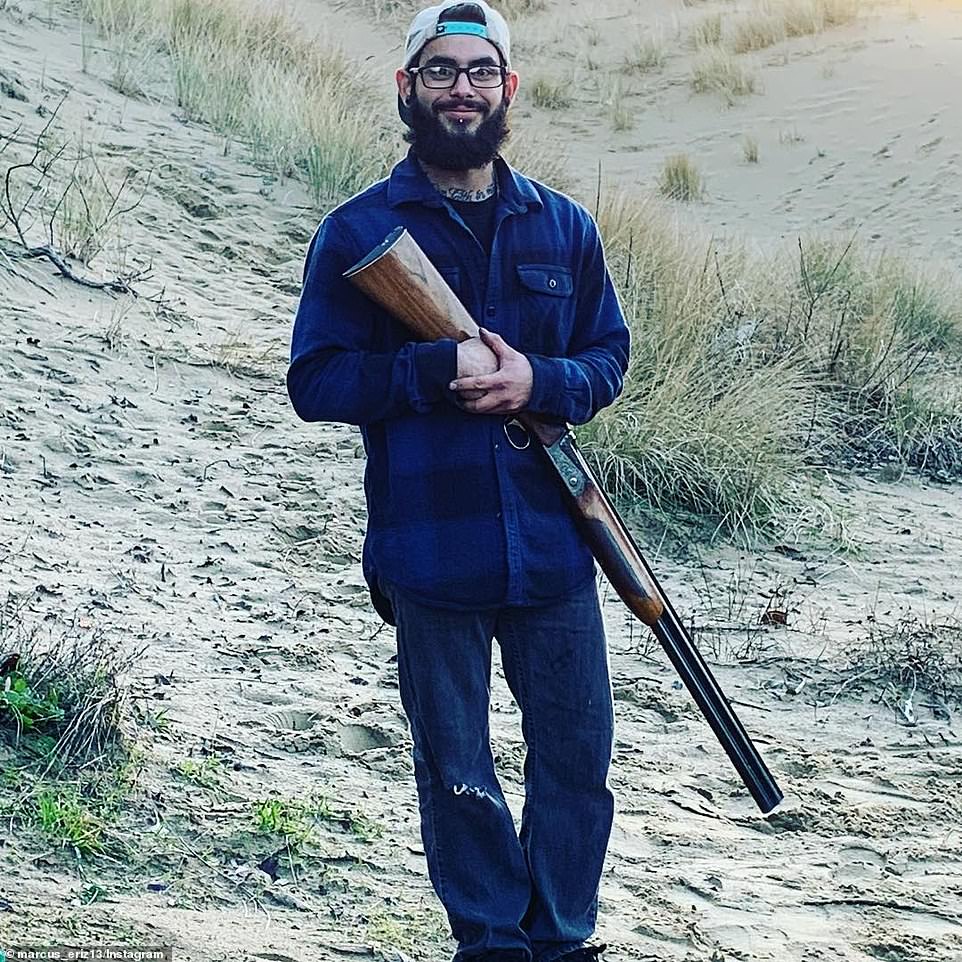 Eriz is seen in a social media photo holding a rifle. He was arrested Sunday over Aiden’s death 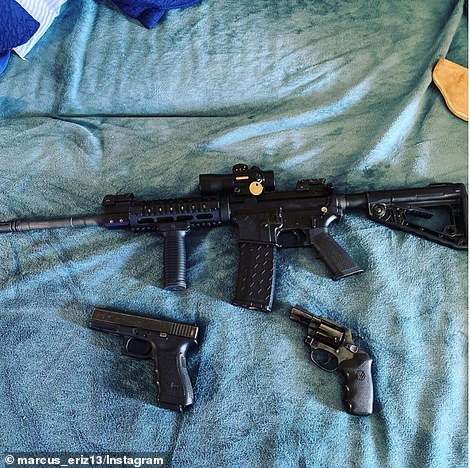 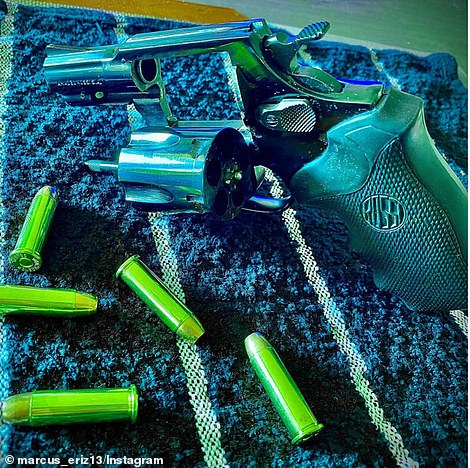 In an old social media post Eriz shows off an AR-15 firearm and Glock pistol (above). He appears to be a gun fanatic 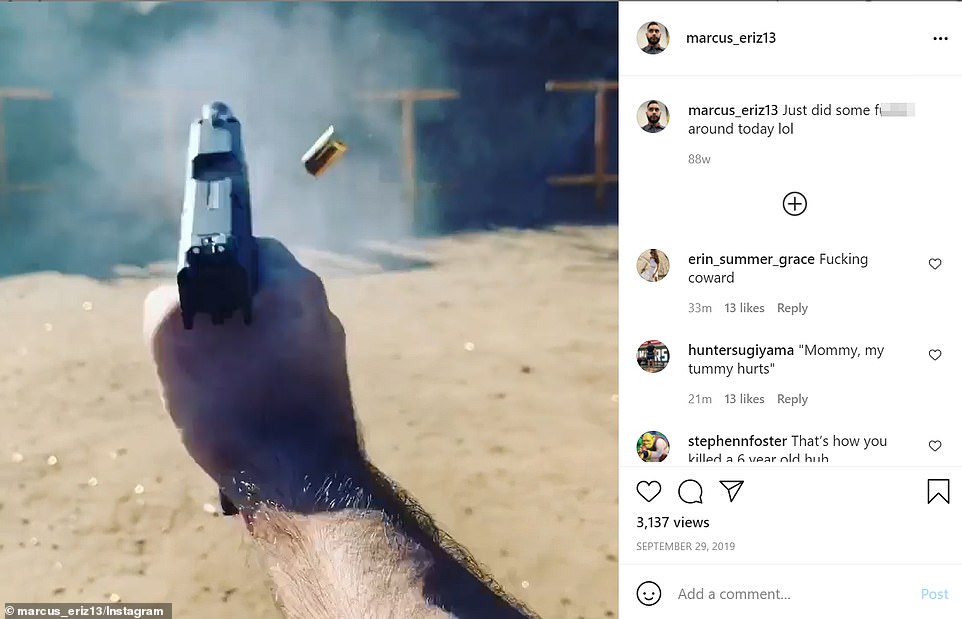 A white 2018 Volkswagen Golf SportWagen SE matching the description of the vehicle is registered to Lee’s parents.

This then led law enforcement to Eriz and Lee.

After delving into the couple’s backgrounds, officials were able to find out they commuted along the freeway where the deadly shooting took place.

Spitzer last week urged those responsible to turn themselves in.

‘The longer this goes on… the less sympathy I’ll have. You killed a 6-year-old boy for God’s sake. Come forward. Turn yourself in,’ he tweeted.

He said in Monday’s press conference that those responsible had ignored his request.

‘I called on them to turn themselves in… And they didn’t. So now it is about the system to hold them accountable,’ he said. 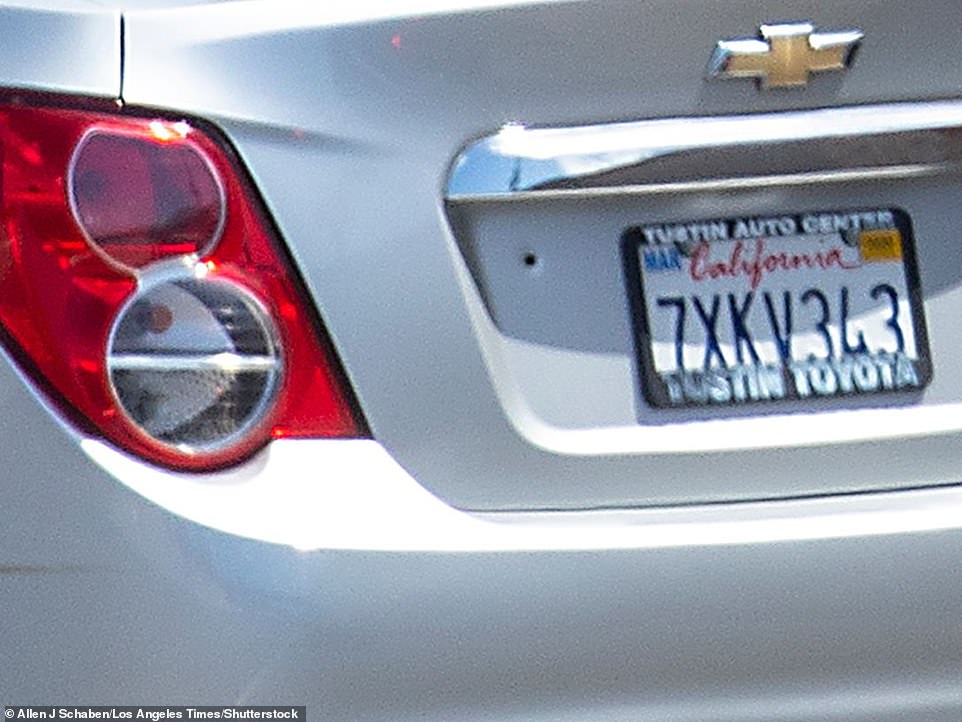 Police believe Lee was driving and Eriz was sitting in the passenger seat when he fired the gun into the back of Aiden’s mother Joanna Cloonan’s car back on May 21. Pictured above is a bullet hole in the car 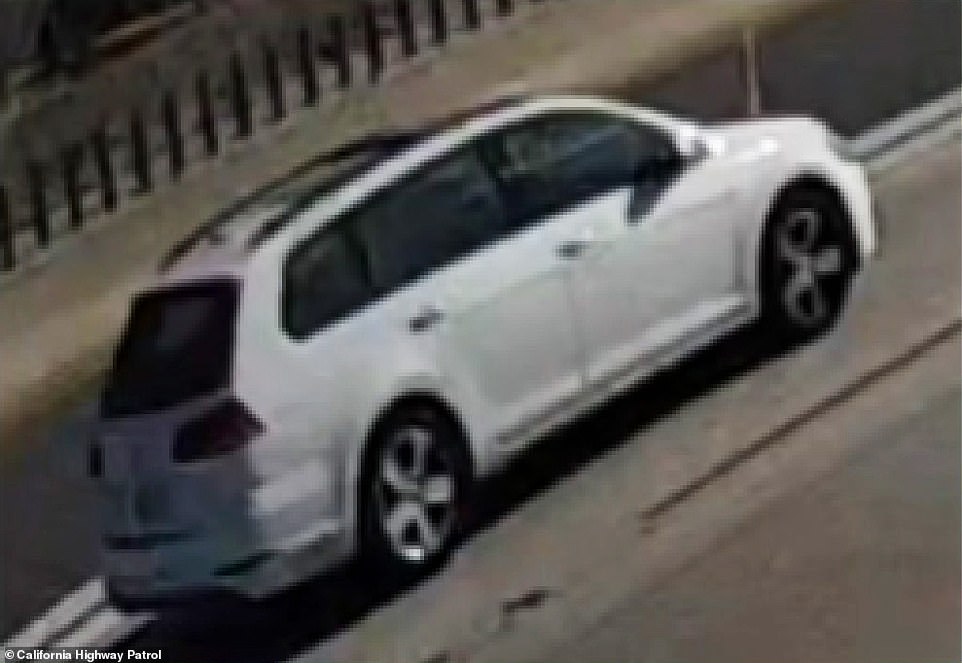 Police have released multiple images of the white Volkswagen Golf Sportswagen in a bid to track the suspects down. The reward to track them down has now surged to $500,000 prior to the arrests

Spitzer held up a photo of Aiden as he said both officials and members of the public were affected by the case because ‘it could have happened to any one of us.’

‘It could’ve happened to any one of us,’ Spitzer said.

He said prosecutors will be ready to file charges against the couple before their arraignment Tuesday morning.

Spitzer would not detail what charges would be filed but said ‘clearly’ there are different charges for the individual responsible for firing the gun and the individual driving.

CHP Assistant Chief Donald Goodbrand said ‘no parent should be made to suffer the pain and loss’ that Aiden’s family are going through.

Police believe Lee was driving and Eriz was sitting in the passenger seat when he fired the gun into the back of Aiden’s mother Joanna Cloonan’s car back on May 21.

Aiden was shot in the back while sitting in the backseat as they drove along the 55 Freeway in Orange County en route to his kindergarten. 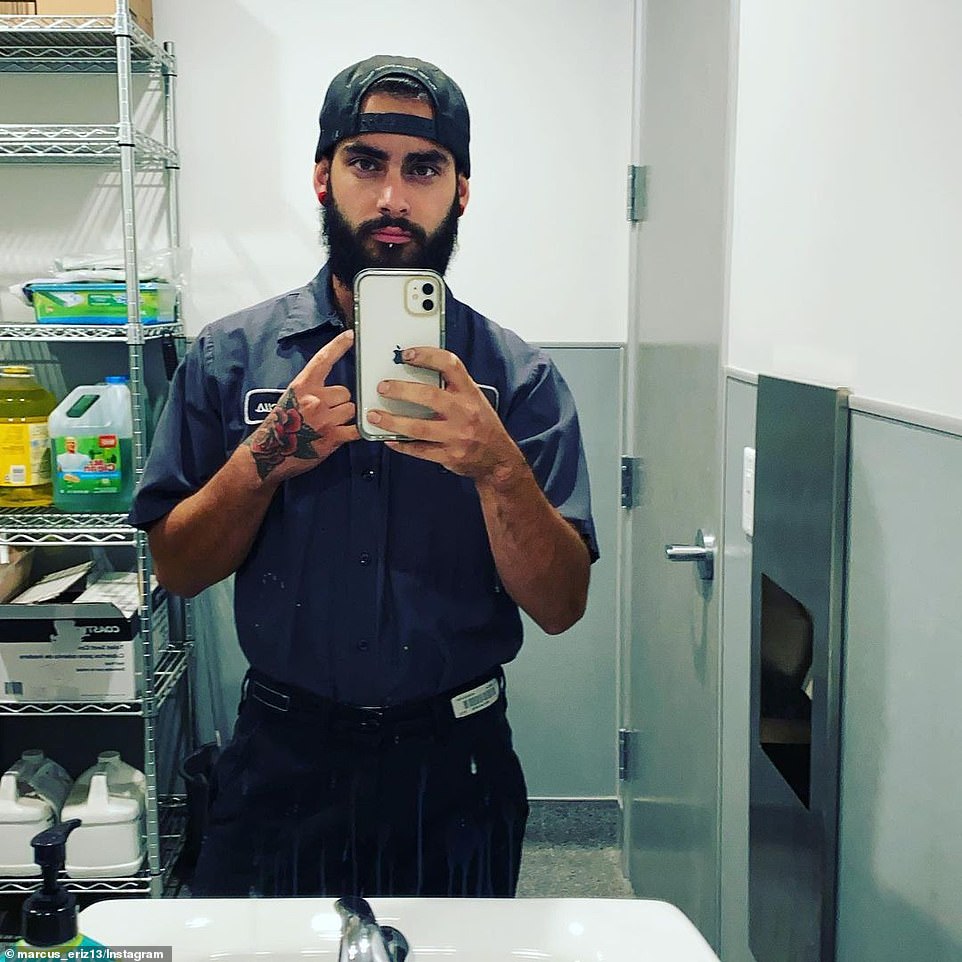 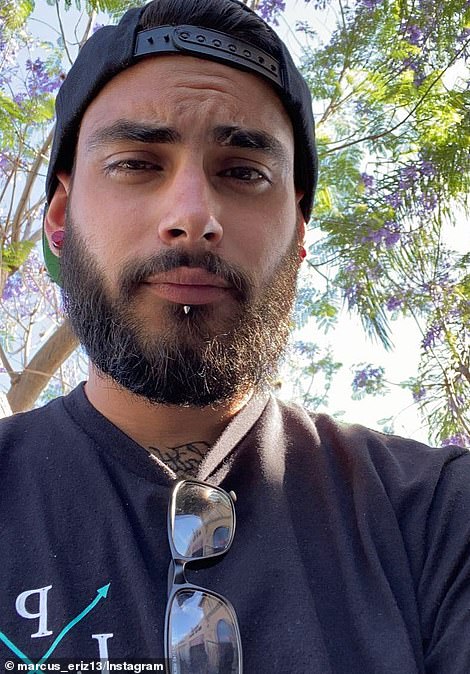 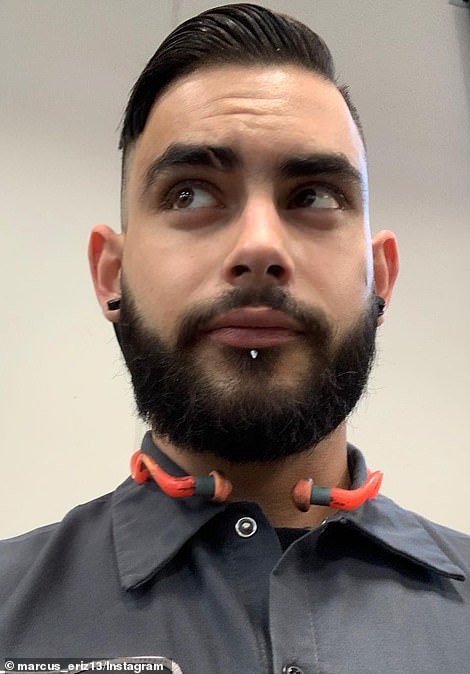 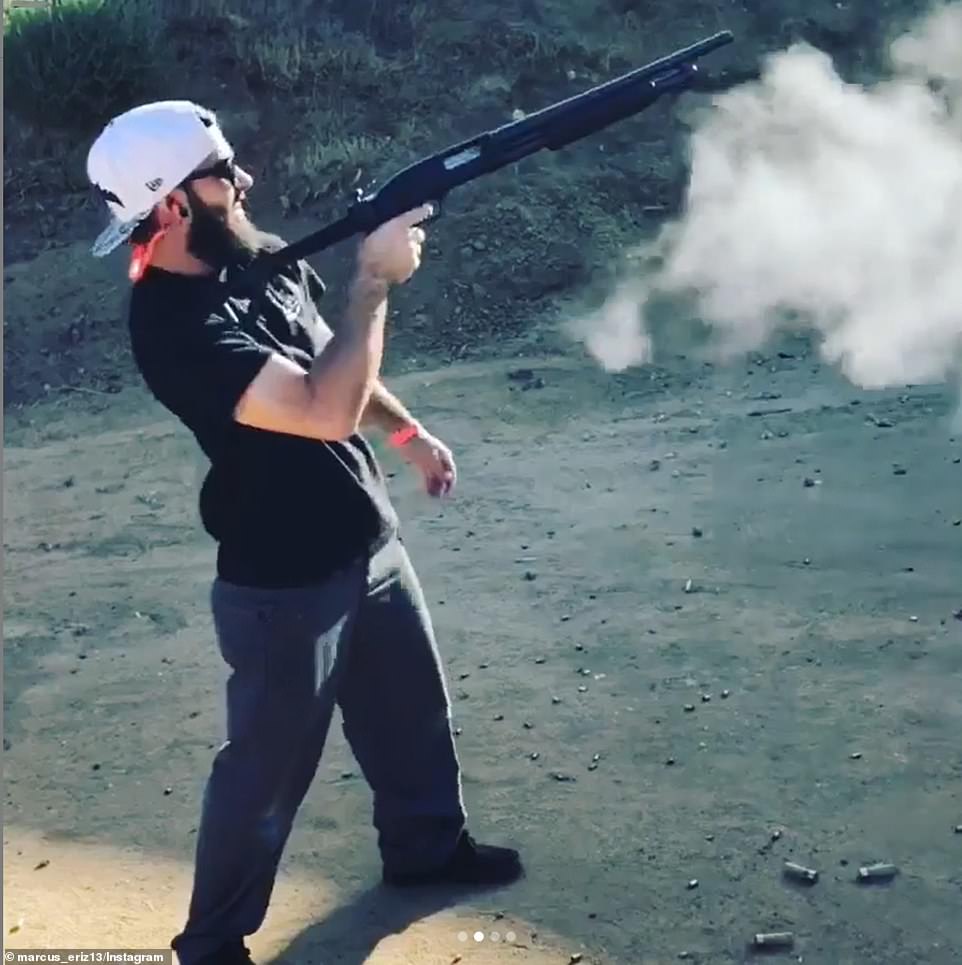 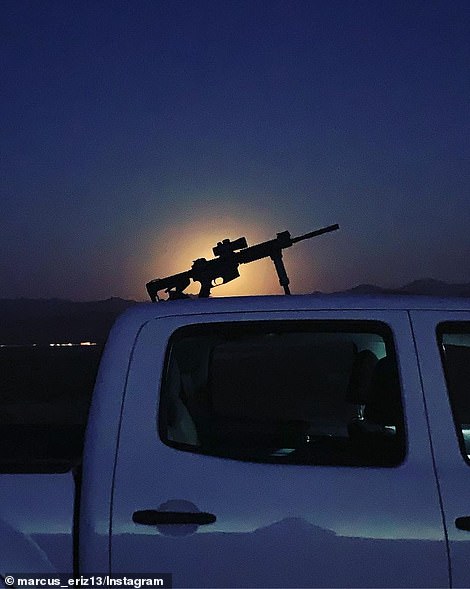 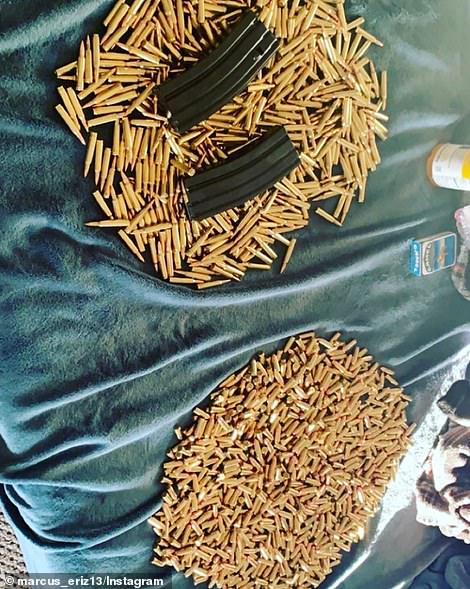 According to accounts from the mother and witnesses who stopped to help her, the road rage ordeal unfolded when the driver of a white Volkswagen Golf Sportswagen cut Aiden’s mother off in the carpool lane.

The boy’s mother stuck up her middle finger at the driver before the other car slipped in behind her and someone inside fired a shot at the rear of her car.

The bullet struck Aiden in the back.

Aiden’s mother pulled over to the side of the road and cradled the little boy until an off-duty police officer stopped to perform CPR and paramedics arrived.

The boy was rushed to a hospital where he was pronounced dead.

Police released multiple images of the Volkswagen in a bid to track the suspects down.

A $500,000 reward had been offered for information that led to an arrest in the case. 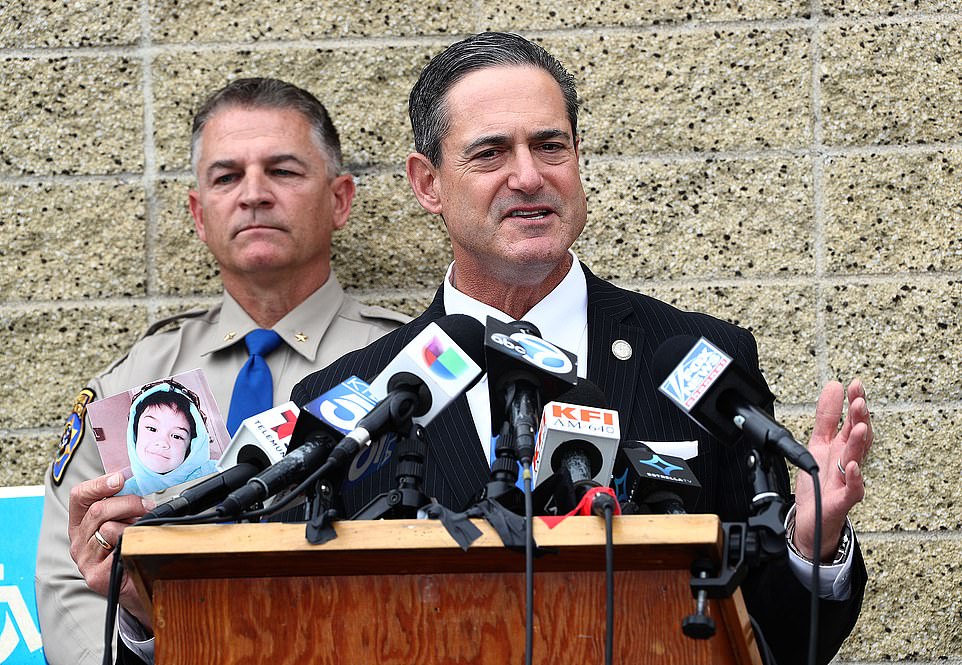 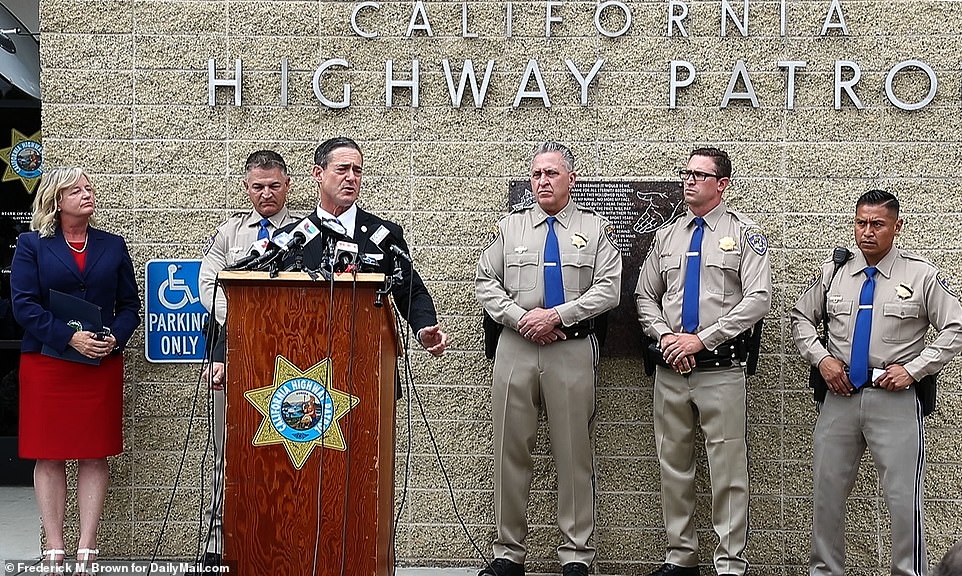 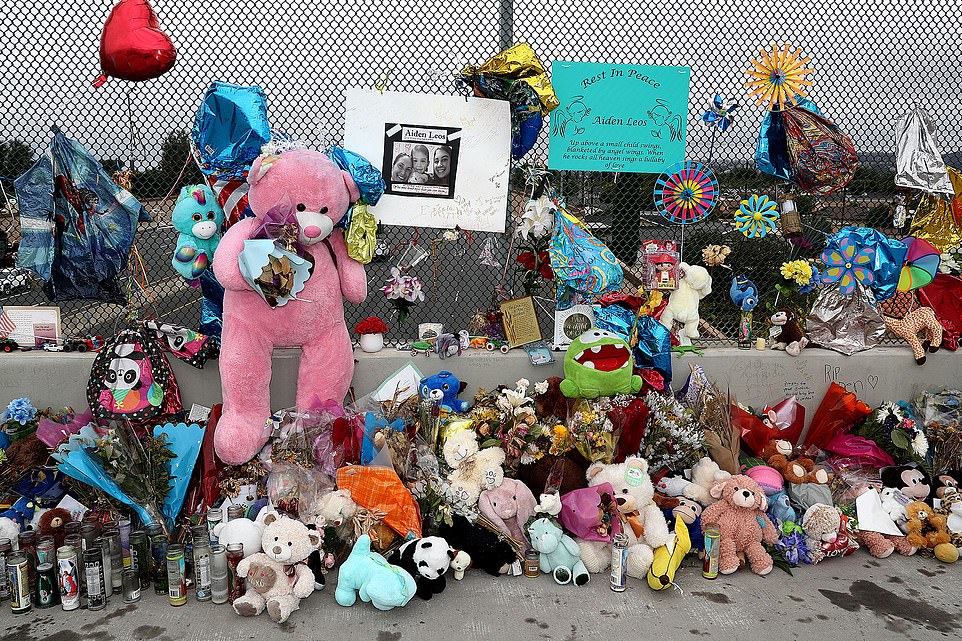 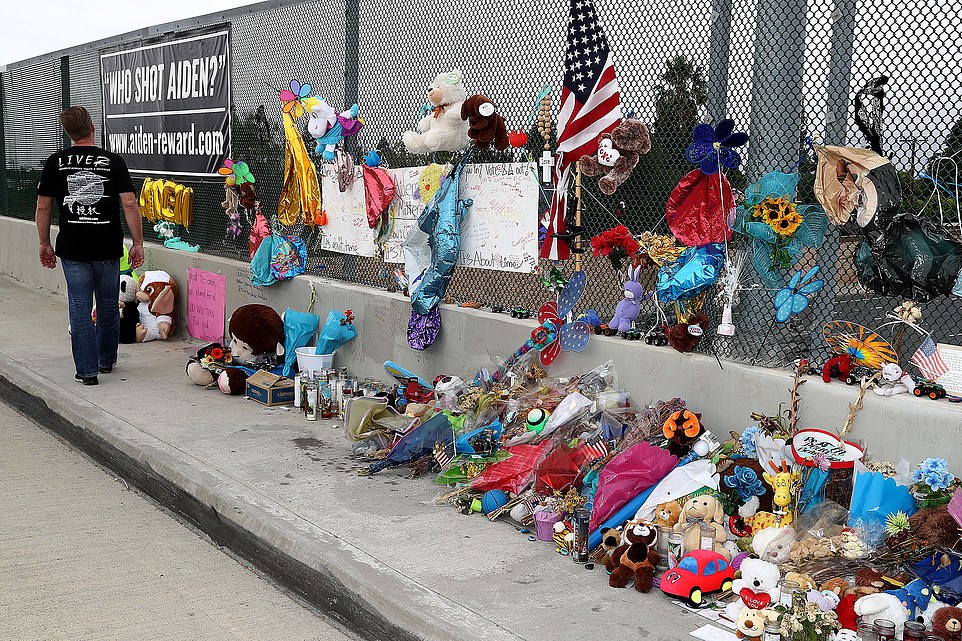 Teddy bears, flowers, cards and candles were left at the scene of Aiden’s death as the community reels from the incident

A GoFundMe fundraiser started by Aiden’s family made up the initial $50,000. Since then, the district attorney, local businesses and two Orange County supervisors have all contributed to boost the reward.

‘On behalf of Border Division Chief Omar Watson and the Santa Ana Area, we are deeply grateful for the professionalism and tireless commitment of our investigators who have worked on this case from day one to find those responsible for Aiden’s death,’ California Highway Patrol Commissioner Amanda Ray said in a statement on Sunday.

‘The Department has been in regular contact with the victim’s family and I assure you they, like us, are committed to seeing justice served.’

The arrests came just one day after an open casket memorial service was held for Aiden at Calvary Chapel in Yorba Linda where the little boy was a kindergarten student.

He was remembered as a child with a vocabulary beyond his years who exuded warmth and tenderness.

‘He gave us such joy, giving us purpose to our life. I felt so honored to be Aiden´s mommy,’ the boy’s mother said.

‘I want nothing more than to find justice, though it won’t bring you back into my arms. My precious son had his life ripped away for absolutely no reason.’ 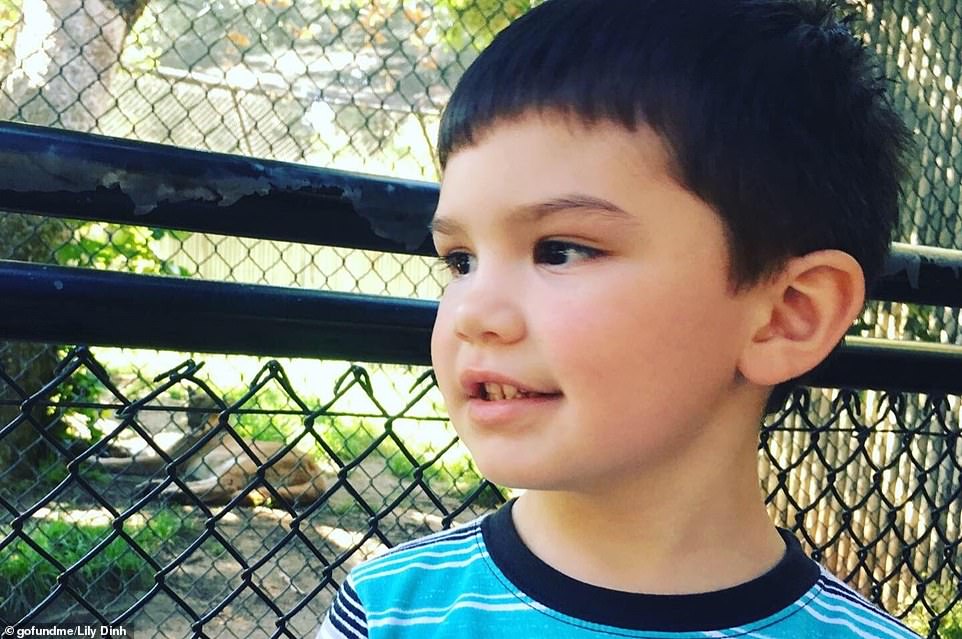 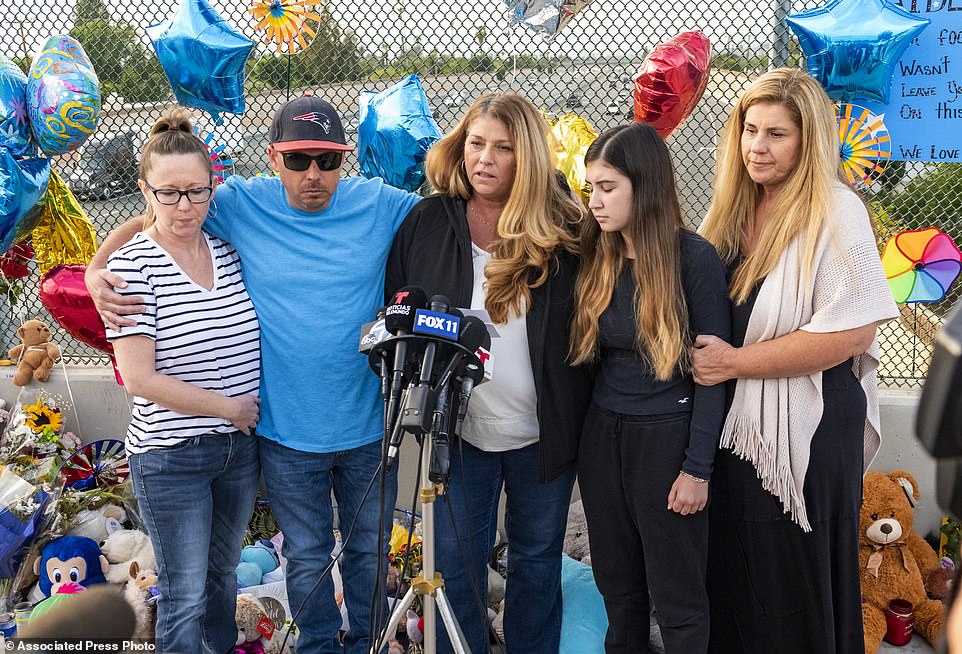 Family members and friends of 6-year-old Aiden Leos tearfully remembered the little boy who was shot and killed in the incident on a Southern California freeway, at his memorial service on Saturday

Ask the Captain: How do pilots keep their emotions in check in an emergency?