Man asks if he’s wrong to tell pregnant sister, 19, to ‘pack her bags’ after she STOLE from him

A man who offered for his pregnant sister to live with him and his family has revealed how he was left ‘furious’ when she stole jewelry from his home and flogged it to get extra cash for her baby.

An anonymous man, from the US, took to Reddit to ask if he was being unreasonable for not wanting his pregnant sister, 19, to live with him anymore after she stole his wife and son’s belongings to ‘make a little extra cash’ for her baby.

The ‘furious’ man explained that he took his sister, who is four months pregnant, in after she was kicked out by her partner and said he would ‘help her’ with whatever she needed.

He explained their parents live on the other side of the country and because she wanted to continue going to school, he kindly offered for her to move in – despite it not being ‘ideal’. 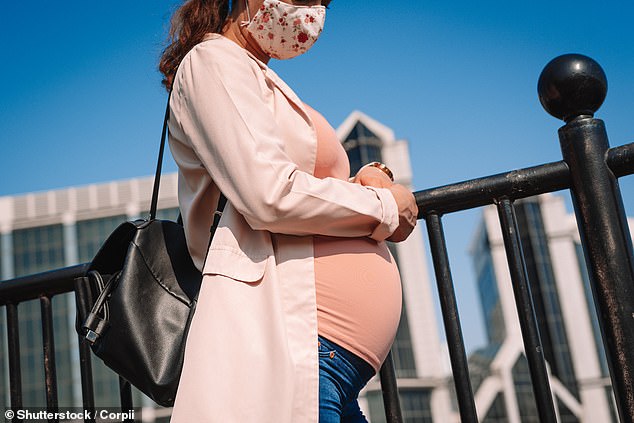 An American man took to Reddit to ask if he was being unreasonable  to not want his pregnant sister, 19, to live with him anymore after she stole his wife and son’s belongings (stock image) 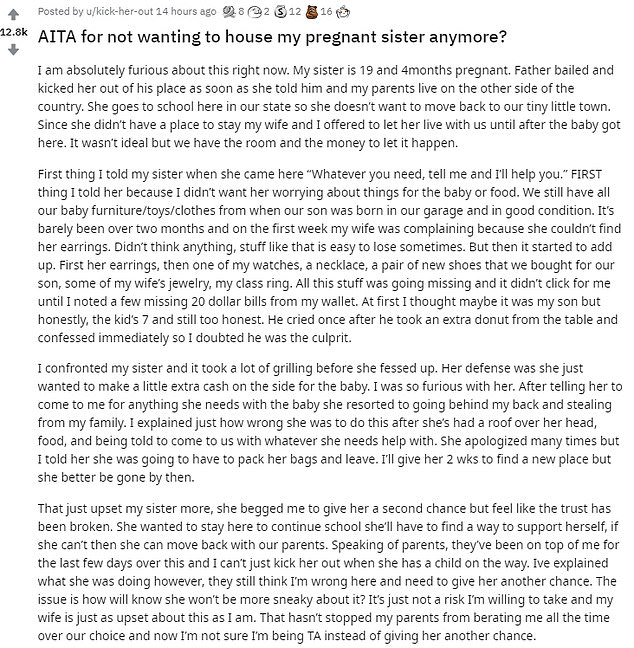 He penned: ‘Father bailed and kicked her out of his place as soon as she told him and my parents live on the other side of the country. She goes to school here in our state so she doesn’t want to move back to our tiny little town.

‘Since she didn’t have a place to stay my wife and I offered to let her live with us until after the baby got here. It wasn’t ideal but we have the room and the money to let it happen.

‘First thing I told my sister when she came here “Whatever you need, tell me and I’ll help you”. FIRST thing I told her because I didn’t want her worrying about things for the baby or food.

‘We still have all our baby furniture/toys/clothes from when our son was born in our garage and in good condition.’

The brother claimed she had ‘barely’ been living with him and his family for two months when his wife began complaining because she couldn’t find her jewelry.

He said that the missing belongings quickly began to rack up and soon they noticed his watch, his wife’s earrings, money from his wallet and even his son’s new shoes had magically disappeared.

The man continued: ‘It’s barely been over two months and on the first week my wife was complaining because she couldn’t find her earrings. 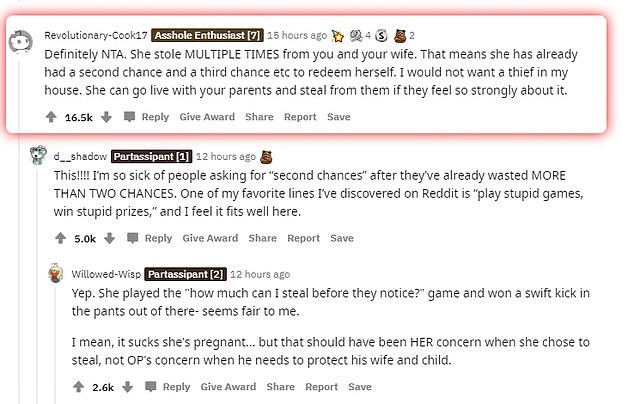 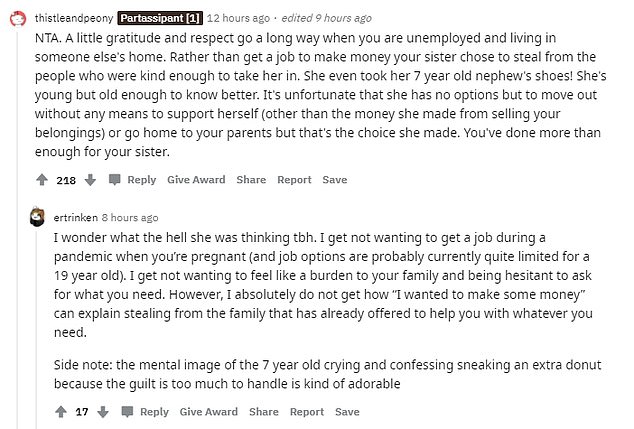 Hoards of Reddit users were quick to reassure the man that he wasn’t being an ‘a**hole’, arguing that his sister cannot use her pregnancy as an excuse to steal

‘Didn’t think anything, stuff like that is easy to lose sometimes. But then it started to add up.

‘First her earrings, then one of my watches, a necklace, a pair of new shoes that we bought for our son, some of my wife’s jewelry, my class ring.

‘All this stuff was going missing and it didn’t click for me until I noted a few missing 20 dollar bills from my wallet.

‘At first I thought maybe it was my son but honestly, the kid’s 7 and still too honest. He cried once after he took an extra donut from the table and confessed immediately so I doubted he was the culprit.’

He went on to explain that he confronted his sister, who eventually confessed and said she wanted extra money for her baby.

The man said he was ‘furious’ as he offered to help her with anything she needed, but she instead resorted to ‘stealing’ from his family.

Despite her apologizing, he said he told her to pack her bags and leave because he could not longer ‘trust her’ – but added the sister made it all the harder by begging for a second chance.

He explained: ‘I confronted my sister and it took a lot of grilling before she fessed up. Her defense was she just wanted to make a little extra cash on the side for the baby. I was so furious with her.

‘After telling her to come to me for anything she needs with the baby she resorted to going behind my back and stealing from my family.’ 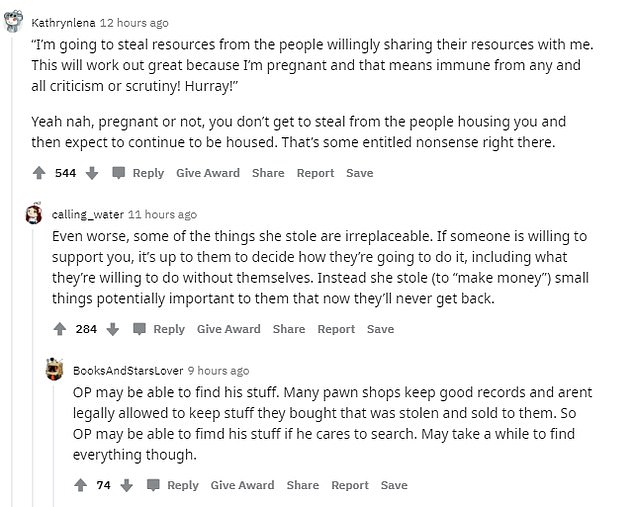 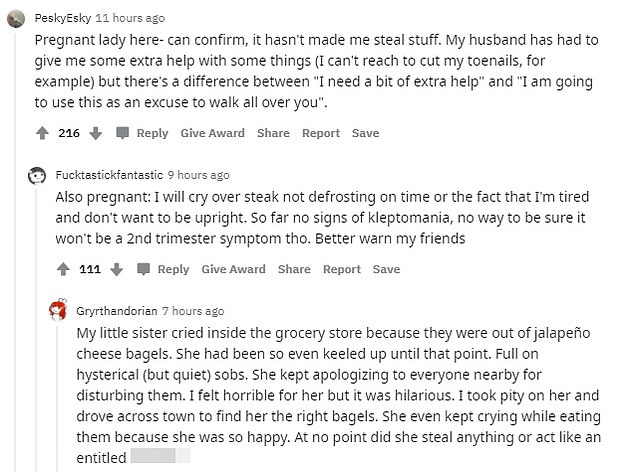 Reddit users claimed that pregnancy did not give his sister an excuse to steal, while other pregnant women quipped that expecting a child doesn’t cause ‘kleptomania’

After the ordeal, he said that his parents have told him that he cannot kick her out because she has a ‘child on the way’ and insisted he gives her another chance.

The father asked other Reddit users if he was being an ‘a**hole’ for kicking her out after the theft because his parents have been ‘berating’ him over his decision – but many agreed his sister was wrong to use her pregnancy as an excuse to steal.

One person wrote: ‘Definitely NTA [not the a**hole]. She stole MULTIPLE TIMES from you and your wife.

‘That means she has already had a second chance and a third chance etc to redeem herself. I would not want a thief in my house.

‘She can go live with your parents and steal from them if they feel so strongly about it.’ 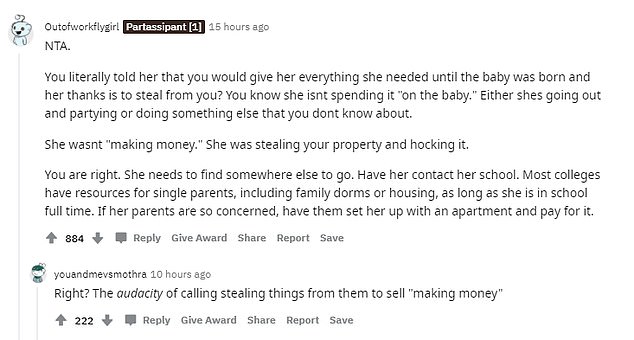 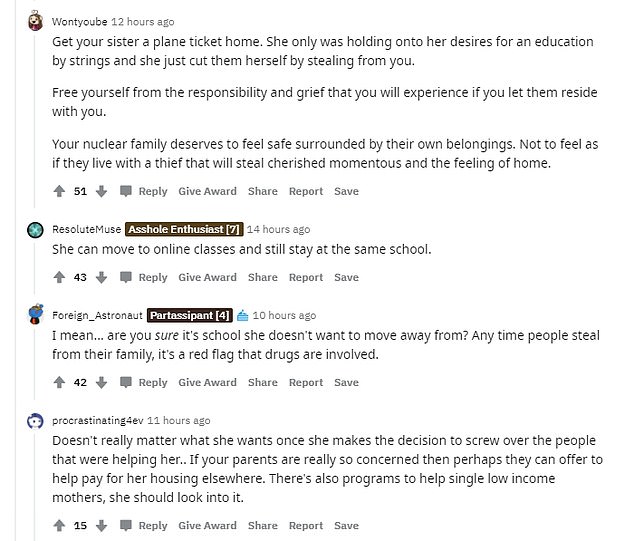 A second fumed: ‘Exactly. I’m also a little tired of people excusing unacceptable behavior because the person is pregnant.

‘Like I’m aware of the hormones/depression/anxiety that can come with it, but pregnancy doesn’t mean you can be a bad person, ya know?’

And a third commented: ‘Seriously. I mean, pregnancy has a lot of symptoms and side effects… but, last I checked, kleptomania wasn’t one of them.’

While a fourth penned: ‘”I’m going to steal resources from the people willingly sharing their resources with me.

‘This will work out great because I’m pregnant and that means immune from any and all criticism or scrutiny! Hurray!”

‘Yeah nah, pregnant or not, you don’t get to steal from the people housing you and then expect to continue to be housed. That’s some entitled nonsense right there.’

Other concerned people said that many of the things she stole will be ‘irreplaceable’ and said that the brother was right to be ‘furious’ after his sister betrayed his trust.

US protests over police shootings continue in Minneapolis and Chicago