A shirtless man who climbed to the top of a 325-foot amusement park ride is now being evaluated for mental health issues as he remains in police custody.

The man, who has not been named, was seen climbing up the Supreme Scream ride at Knott’s Berry Farm in Buena Park, California late Saturday night, sending the amusement park into a frenzy as officials tried to get him down from the top of the tall structure.

Videos posted to Twitter of the incident showed him scaling the structure, ultimately reaching the top, where he sat down calmly and spread his arms.

He reportedly screamed as he reached the top, Newsweek reports, while the area surrounding the ride was evacuated. 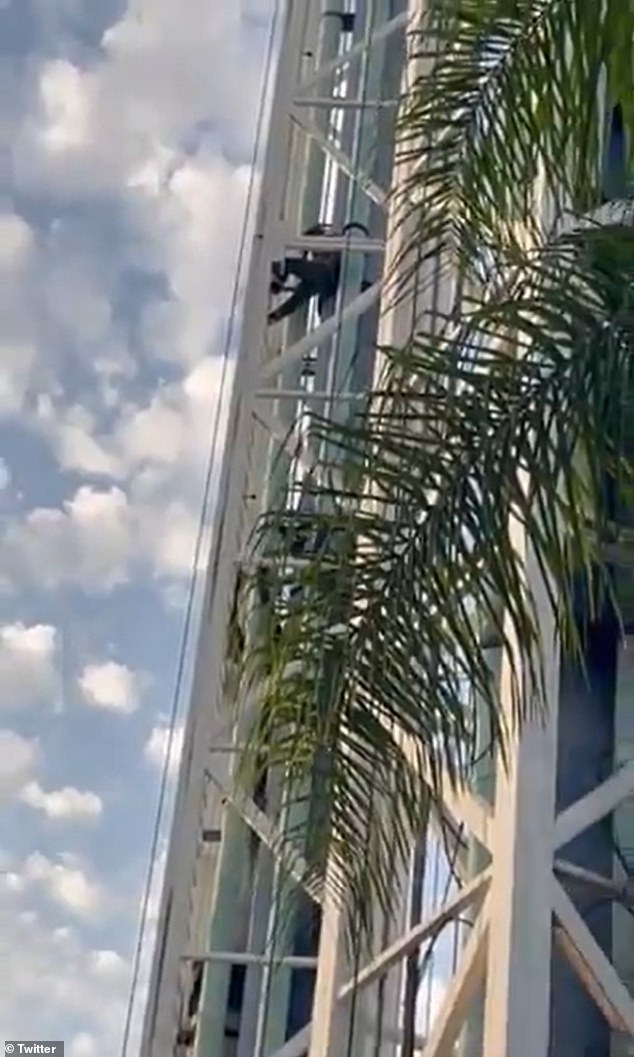 Videos posted to Twitter showed the moment a shirtless man scaled to the top of the Supreme Scream ride at Knott’s Berry Farm in Buena Park, California Saturday night 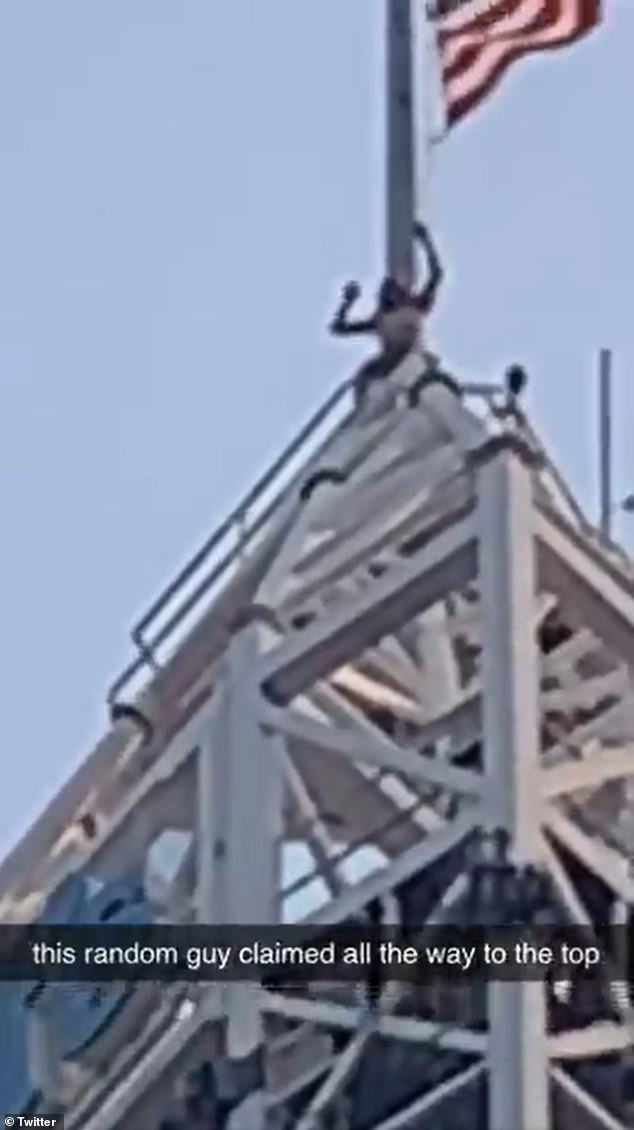 The man, whose name has not been publicly released, climbed all the way to the top of the 325-foot tower and appeared to sit down 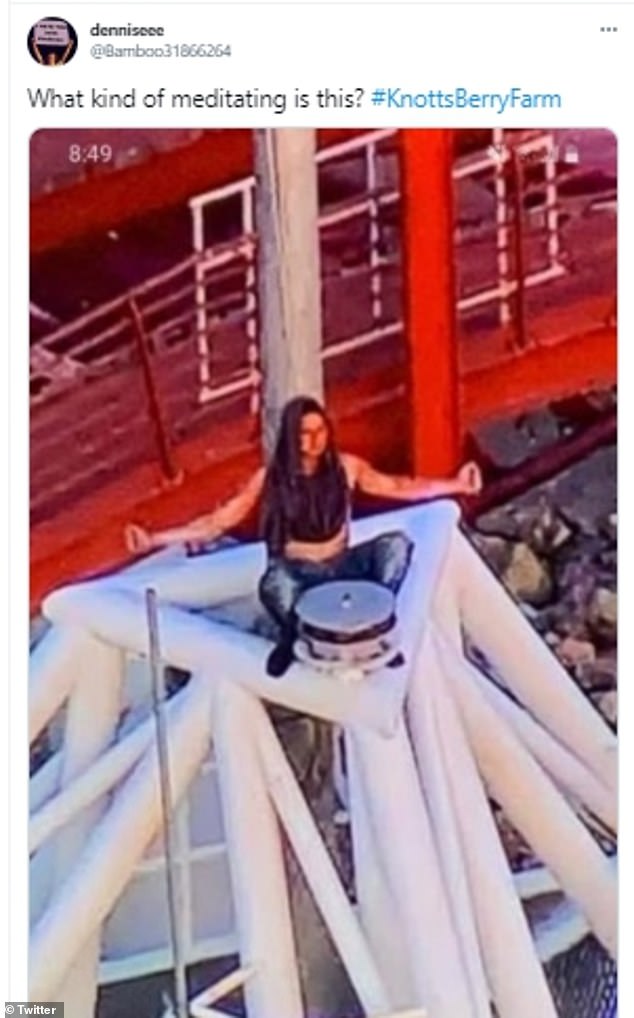 Police Sergeant Mario Escamilla told the Orange County Register that park visitors first flagged down officers to make them aware that somebody was climbing the top of the tower at around 7:22 p.m.

Buena Park police arrived to the scene with the Orange County Fire Authority shortly thereafter, he said, while La Palma Avenue was temporarily closed between Beach Boulevard and Western Avenue.

The police issued an appeal to the public on social media to ‘please stay out of the area while we work to bring this person down, safely.’

Meanwhile, the park remained open, but the area around the ride was roped off, with firefighters preparing to climb the structure themselves to rescue the man, who ultimately climbed down a ladder from the top on his own accord around 9 p.m. 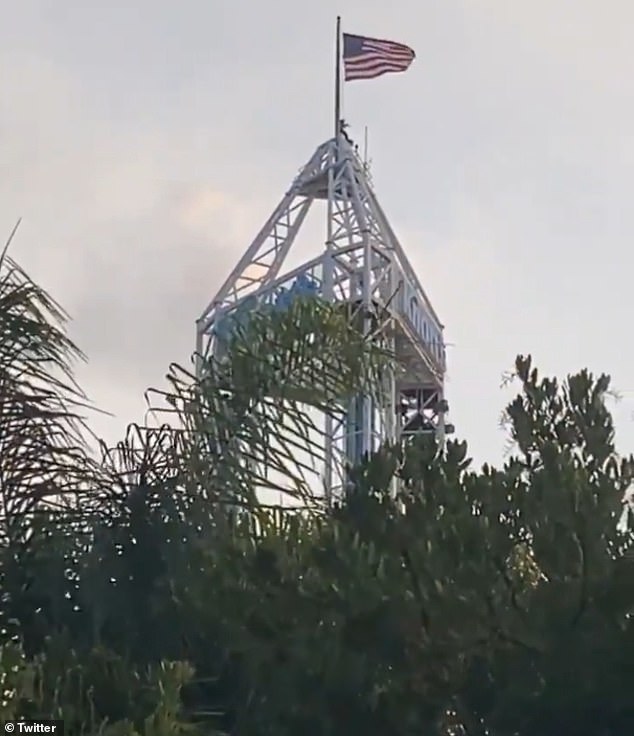 The Supreme Scream ride is the tallest in the amusement park, which had to evacuate people in the nearby area Saturday night 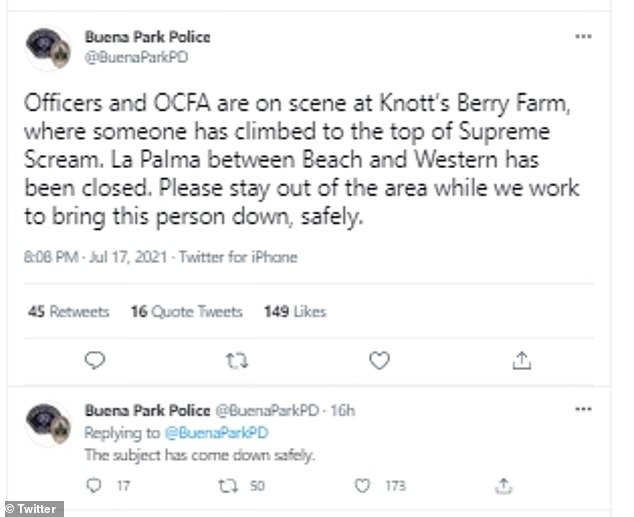 Officials from the Orange County Fire Authority later tweeted that once he was secure, ‘our firefighter paramedic assessed and transported him to a local hospital,’ where Escamilla said he will be undergoing a mental health evaluation.

It remains unclear whether the man will face any criminal charges.

DailyMail.com has reached out to the police department for further information.

Park-goers on the scene, though, said the situation was scary, with one woman telling CBS Los Angeles that park officials announced over the loudspeakers that ‘someone was trying to commit suicide,’ and the park was turning off all of its electricity as a result.

In a statement released after the incident, Knott’s Berry Farm officials said: ‘At approximately 7:23 pm, Knott’s Berry Farm became aware of a male who had accessed an unauthorized area and climbed the Supreme Scream tower. Park personnel alerted local law enforcement and emergency responders who are now on site.’

‘The guest descended the tower at 8:55 pm and is now currently safely on the ground in police custody.’

‘The safety of our guests is always our top priority,’ the statement concluded.