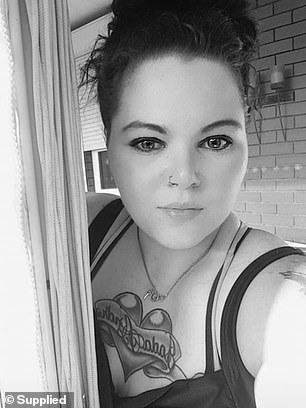 A man whose little sister fled domestic violence she before taking her own life has vowed to raise her four children as his own.

The last time Sam Burns spoke with Corrina was in March 2020 when he promised to see her ‘as soon as possible’ after Covid border closures ruined their plans to reunite at Easter.

Days later, 12-year-old Zeke and seven-year-old Tyra found their mother dead at home when she failed to pick them up from school.

‘Zeke grabbed his sister’s hand and they both ran out of the house, screaming, and they kept screaming in the front yard,’ Mr Burns told Daily Mail Australia.

‘Neighbours came to see what was going on, and then police found Corrina.’

Struck by heartache, the then 28-year-old travelled from his home in west Victoria to Corrina’s final resting place in South Australia – where she went to escape the violent father of her children. 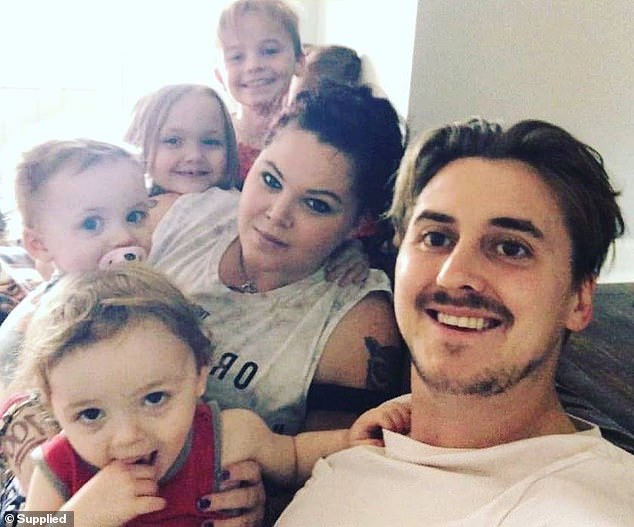 Pictured: Corrina with her brother Sam Burns and her four children when they were younger, pictured back to front: Zeke, Tyra, Jada and Andre 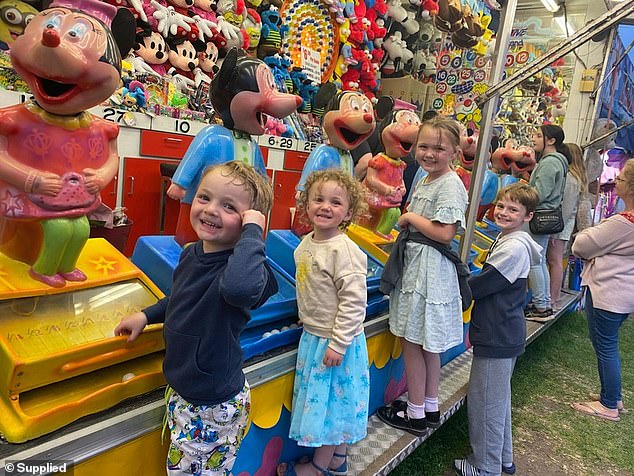 When Zeke asked his uncle if he and his siblings would move to an orphanage, Mr Burns said he knew he and his 26-year-old partner Maddison, who had no children of their own, would raise their nieces and nephews.

‘There were times when we didn’t know if we could do it, or look after all four – it was tough because it changes your life plans, but looking back, I’m so glad we did and I wouldn’t have it any other way,’ he said.

The 30-year-old’s suicide came after more than a decade of alleged emotional and physical abuse at the hands of her ex husband, who she met at the age of 15 as part of a prison pen pal program.

Corrina’s father also killed himself in his jail cell when she was 11. She and Mr Burns do not have the same biological father. 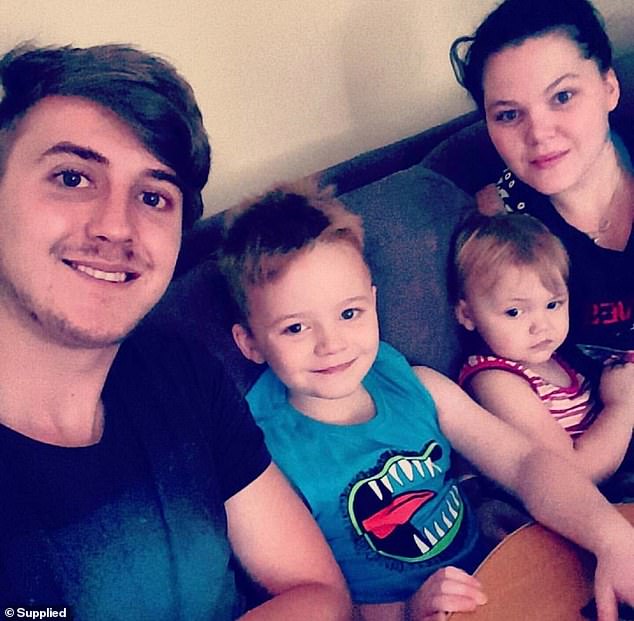 Pictured: Sam Burns with his nehpew Zeke, neice Tyra, and their mother Corrina. Mr Burns and Corrina were ‘very close’ despite having different fathers 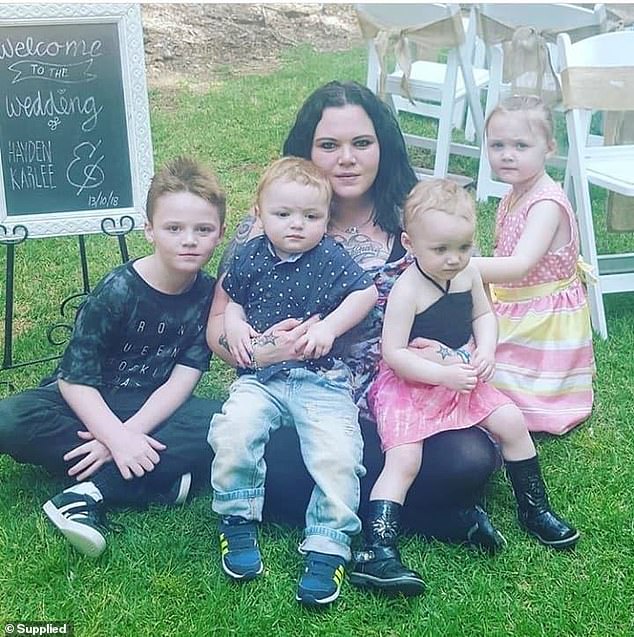 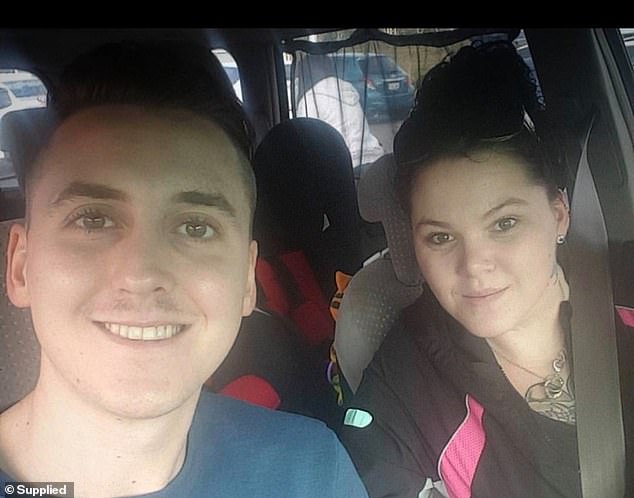 Sam Burns (left) said Corrina was with her ex since they were teenagers, and recalls police being involved in their relationship even in its early stages

She would write her much older boyfriend heartfelt letters, which he would read from the confines of his prison cell after being locked up for various crimes.

Despite him allegedly ‘holding her hostage’ for a period of time and not allowing her to see her family, the young mother forgave him multiple times for ongoing alleged abuse.

But the situation came to a head in 2018 when went grocery shopping and came home to find strangulation marks on Zeke’s neck.

‘Corrina didn’t know what happened with the kids and their father when she was out, and the day she found out, she kicked him out,’ Mr Burns said. 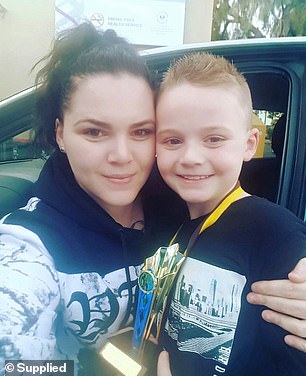 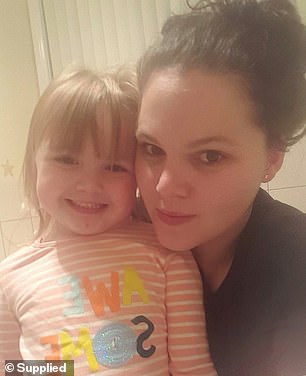 Corrina fled her home in Ballarat, Victoria, to South Australia to stop her ex husband from finding her 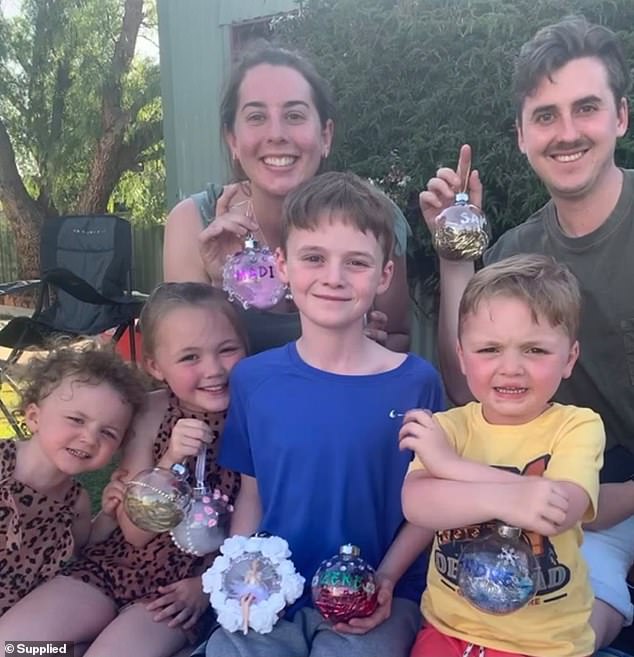 The father tried to drive over South Australia and Victoria border, was caught by police and went to jail for ‘a few months’ for hurting his son.

According to Mr Burns, he allegedly ‘violated the no-contact orders against him almost immediately when he got out’.

‘He would contact through others social media accounts and the abuse was relentless,’ he said.

Terrified for her children’s safety, Corrina – who had already moved away from her family in Victoria to escape his clutches – managed to convince her former partner that she had taken her family somewhere he couldn’t find them in Brisbane.

It worked, until a friend posted a photo of the children in their South Australian school uniforms on Facebook early last year and he realised they were exactly where he left them. 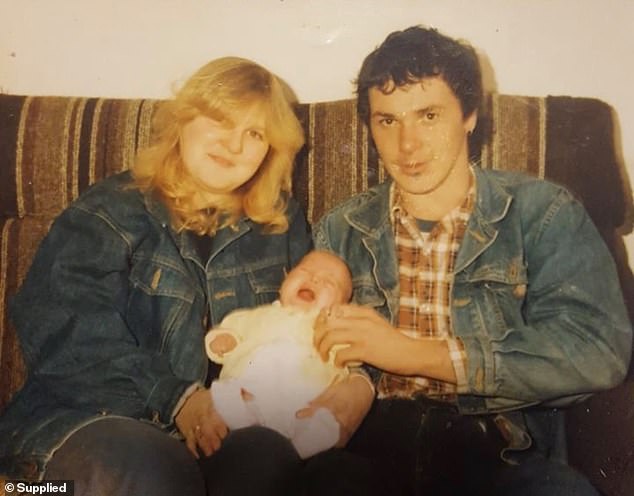 Pictured: Corrina as a baby with her mother and father. Her father was in jail when he took hsi own life. Corrina was 11 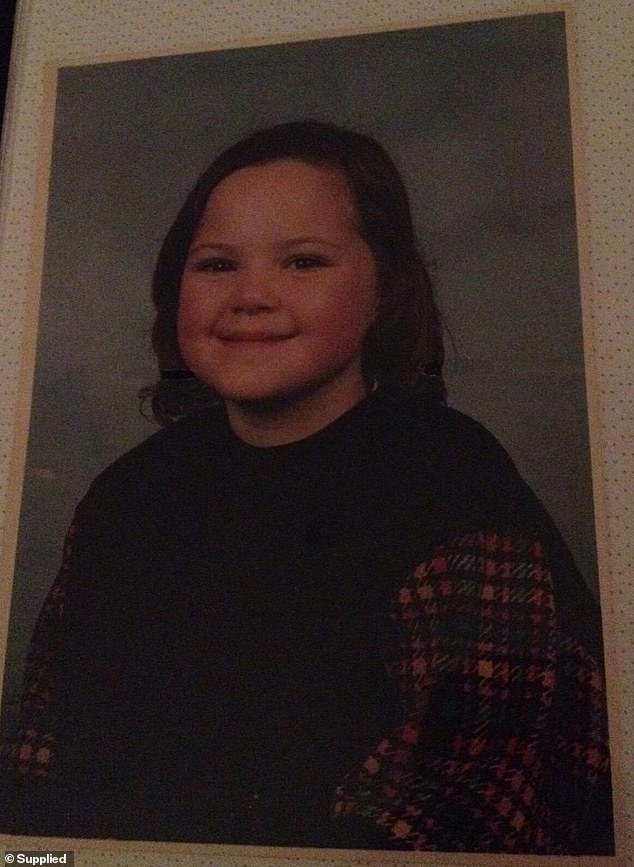 Pictured: Corrina as a child. She and her ex husband started seeing each other while he was in jail

‘It was on April Fools,’ her brother said.

‘And she had a sense of humour – I’m still kind of waiting for her to come out and say it was all a big joke.’

Mr Burns said it’s hard to know what the tipping point was, but he believes the threat of her ex coming to find them was too much.

In hindsight, the family can recall times when Corrina would imply that she knew something might happen to her.

‘The last time we spoke, I was telling her that my partner and I were worried we wouldn’t be able to get a home loan approved when Covid started to become a real problem,’ he said. 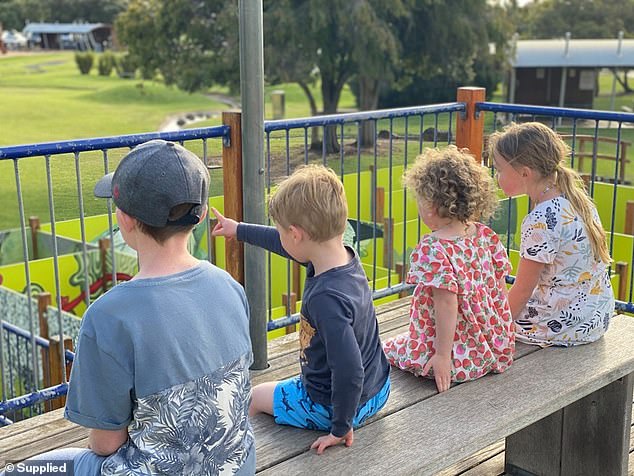 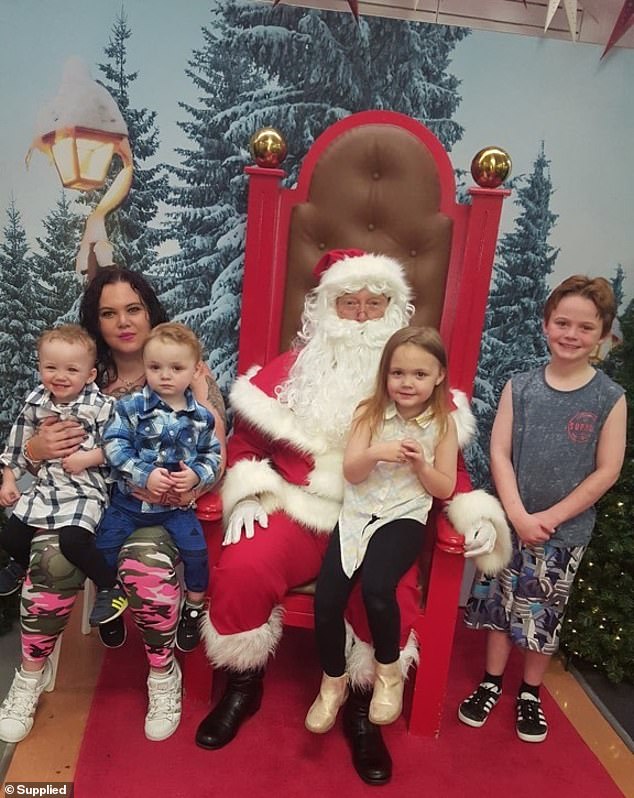 The children have now spent their first Christmas without their mother. Pictured: The last Santa photo they took together

‘I had to reassure her that we would settle, and I think in her mind that moment was enough to know the kids would always have a safe place.’

Before she died, Corrina was actively involved with a women’s domestic violence support group within her local community and was studying a TAFE course to help other women in vulnerable situations.

When Mr Burns and Maddison decided to take full custody of all four children, Zeke looked at his uncle and said: ‘Mum always said if anything ever happened that you’d take care of us.’

While the siblings have five other brothers and sisters, Mr Burns said they are all much younger and want to help but are not equipped to raise four children full time. 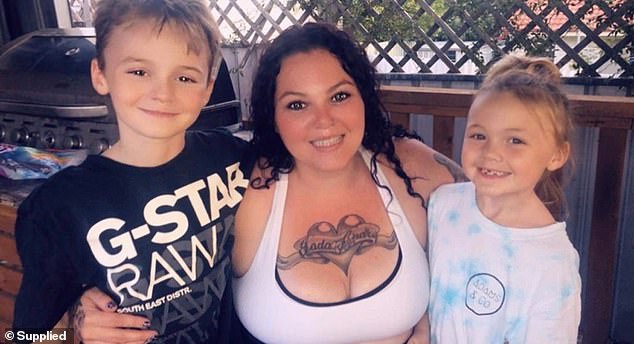 Separated by state borders due to coronavirus, the family have not been able to have a proper funeral and farewell for Corrina

Separated by state borders due to coronavirus, the family have not been able to have a proper funeral and farewell for Corrina.

To help raise money to bring Corrina’s body back to Victoria, raise the children and support four-year-old Andre, who has developmental delays, the family have set up a GoFundMe campaign.

‘We understand that the current climate is extremely difficult for everyone but even the smallest donations will help,’ the page read.

Almost a year on from their mother’s tragic death, the children are still scared their father will find them.

‘They’ve started sharing bits and pieces about their experiences – we don’t discourage it because it’s part of their process, and I think it means they feel safe,’ he said.

‘We still talk about their mum every day – she loved them so much and she would have done anything to keep them safe.’ 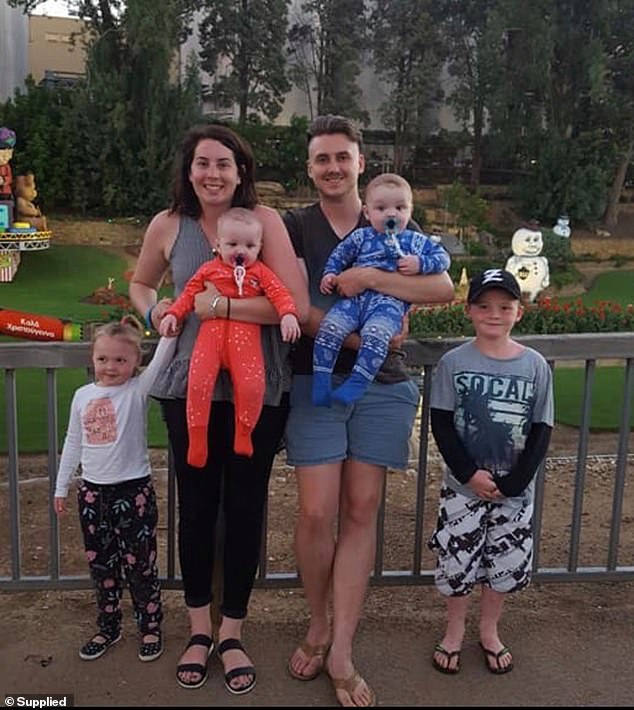 For now, Mr Burns (pictured with Corrina and the children) said the kids are trying to get on with their lives

For now, Mr Burns said the children are trying to get on with their lives.

They have shared their first Christmas together without Corrina, Zeke has just graduated primary school and become a teenager, and the anniversary of her death looms.

Amid the stream of high emotions, the children’s father has been threatening to take full custody.

‘When Corrina died, so did the no-contact orders,’ Mr Burns said.

‘According to the legal system, he does still have rights regardless of the whole situation. He used to get in touch a lot, but he’s been pretty quiet recently.’

He added: ‘Maybe it’s the calm before the storm.’