A Falklands veteran, 57, has been sacked from a Covid testing centre after he revealed through a post on Facebook that his colleague, 26, was  convicted paedophile.

Nigel Towler wrote an angry post on social media which eventually cost him his job after finding out his colleague Michael Gill, who had just started working at the Durham city centre, was convicted of trying to meet a child for sex.

Mr Towler has now been forced to apply for Universal Credit after losing his £24k-a-year job – his first job in five years – for what the site’s operator, Sodexo, said was a breach of contract.

He said: ‘I’m absolutely fuming. I’ve lost my job and my income all for making it public that a paedophile was working there to staff who should have a right to know.’ 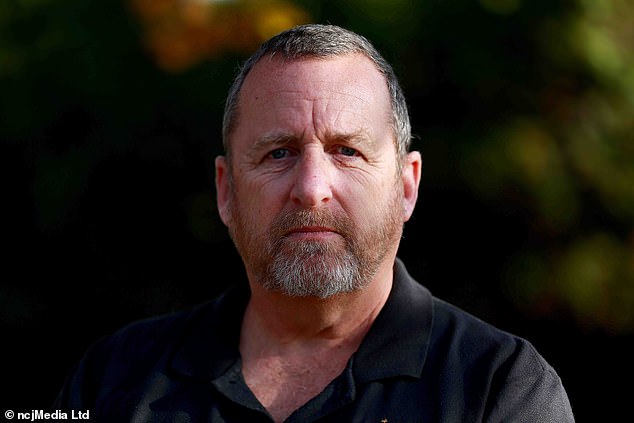 RAF veteran Nigel Towler lost his job  because of a social media post, after he discovered his colleague is a convicted paedophile

The testing site’s operator, Sodexo, said it was ‘unaware’ of Gill’s crime when he was hired at the Territorial Lane testing centre.

A spokesperson for the firm added that it took immediate action as soon as it became aware of his conviction, adding: ‘We have informed Mr Gill that we will not be providing him with any further work’.

Gill, 26, narrowly avoided prison last month after grooming who he thought was a 15-year-old schoolgirl via the dating app Badoo.

Newcastle Crown Court heard he offered to bring ‘condoms and a blanket’ to have sex with the girl back in March.

However the ‘victim’ was a decoy and Gill was snared by the Guardians of the North group.

‘He was pretty disgusting in his chats. He was wanting to take the kid into the woods and was offering to bring the condoms,’ said a member of the group.

‘He modelled himself on someone from YouTube and had his hairstyle the same way, he was a proper weirdo.’

However since his conviction, he claims the group were swamped with furious messages from people who had spotted Gill in his new role.

According to Mr Towler, the County Durham pest was in his training group when they both started at the same time, roughly six months after Gill’s arrest.

Shortly after he was horrified to discover  that Gill had been sentenced for attempting to meet an underage girl following sexual grooming.

He decided to put up a post on social media but later Sodexo told Nigel he had breached the firm’s social media policy.

‘He seemed alright at first, but it goes to show you don’t know who you are working with,’ said the 57-year-old, from Crook.

‘When I read about it, I sat for a few days thinking about what to do, but I became more and more distressed and realised I had to tell someone.

‘So I put a post on Facebook that I was devastated to be working alongside a convicted sex offender.’ 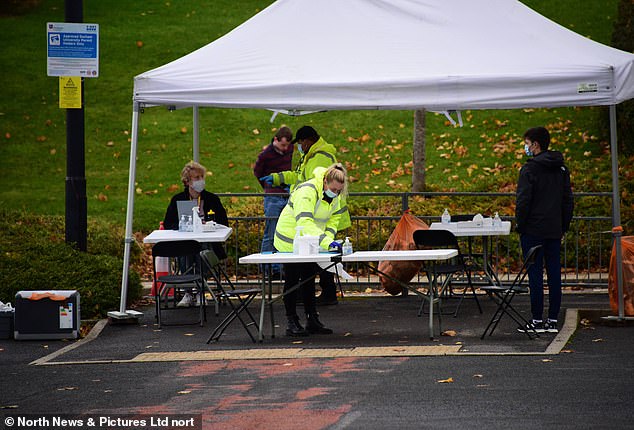 ‘I thought that was the end of the matter, but the next day I got a phone call on my day off telling me that I’d brought the company into disrepute.

‘I asked them how could I have brought the company into disrepute, when I’m the one who has been exposed to him?’

‘Of course, without knowing the precise circumstances, it’s hard to judge this case fully, but the facts as reported are extremely worrying,’ said the Labour MP.

‘I think residents in Durham would like to learn more about Sodexo’s recruitment practices and what sort of information they ask of potential employees at the Durham city centre Covid testing site.

‘Whether we are in the middle of a pandemic or not, the safeguarding of children and vulnerable adults is paramount.

‘I’m afraid this is one of the many issues with the outsourcing of test and trace systems to the private sector. Clearly we don’t have the same safeguards as we would have when the public sector, and the NHS in particular, delivers these services.’

The probation service is now investigating Gill, who was sentenced to a community order and placed on the sex offender’s register following his conviction.

Durham Constabulary confirmed it had contacted the probation service after a complaint was received, while a Sodexo spokesperson added: ‘We are currently liaising with the probation service regarding an individual who was engaged by us as a multi-service operative at one of the Covid-19 testing centres.

‘We were unaware of the person’s pending court case when we recruited them.

‘The individual was immediately suspended when we were informed of their conviction and we are investigating the matter. We cannot comment any further on an individual’s employment with us.

‘The role of a multi-service operative involves cleaning and waste management duties and does not require any interaction with members of the general public.

‘The safety of those we serve is our top priority.’

Devastated Mr Towler says his dismissal is a crushing blow, having been out of work for five years as he battled PTSD following years of service in the RAF.

And he even claims he’s been kicked out of a work WhatsApp group after being ‘cut dead’ from his former colleagues.

He added:’I’ve been made to feel like I’m the victim,’

‘They’ve made me feel like it is my fault, when all I’ve done is stand up and say this is wrong.

‘This has totally shattered me, it really has.’

An Amazon driver got his truck stuck in a golf cart tunnel. He blamed his GPS.

How basketball prospects have navigated COVID-19 recruiting without official visits