A man has told how he believes his girlfriend should be the one to get down on one knee when she’s ready to be engaged after she rejected his first proposal – but she strongly disagrees.

The 28-year-old, who is believed to live in the UK, took to Reddit to ask for advice after his partner, 30, of four years, accused him of ‘punishing’ her for ‘not being ready.’

He explained that he made an effort to make his first proposal ‘sentimental’ and now believes that it’s his girlfriend’s duty to offer an engagement ring when she feels the time is right.

The post racked up hundreds of comments, with many agreeing he shouldn’t propose again – while others argued the couple should consider ending their relationship because it could be difficult to get over the initial rejection. 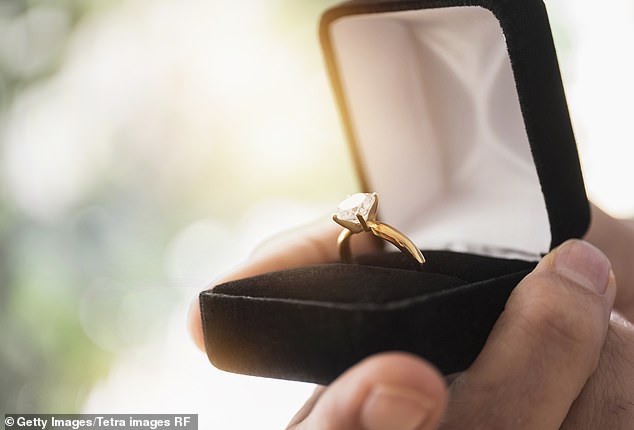 The discouraged man wrote: ‘I (28M) recently proposed to my girlfriend (30F). I did it at home, as she has said that she wouldn’t want a public proposal. I tried to make it feel special. I made an elaborate meal from scratch, and afterwards I popped the question.

‘Long story short, her answer was that she loves me and wants to marry me someday, but isn’t ready to take the step to be engaged.’

He went on to explain how he suggested they could wait a while before actually getting married, but said she still wasn’t keen to get engaged.

While confirming he respects her decision, he said just days later she mentioned something about him proposing again in the future – to which he told her that would now be down to her.

He continued: ‘In essence, my point was that I had already asked, she knows I’m ready, my cards are “on the table.” Also, I already planned and executed a proposal. I put a lot of work into it to make it sentimental, and I don’t feel like I should have to re-create that moment.

‘She disagrees, and seems to feel like I’m punishing her. This is putting a lot of strain on us, and I’m not sure how to bridge this impasse. Any advice?’ 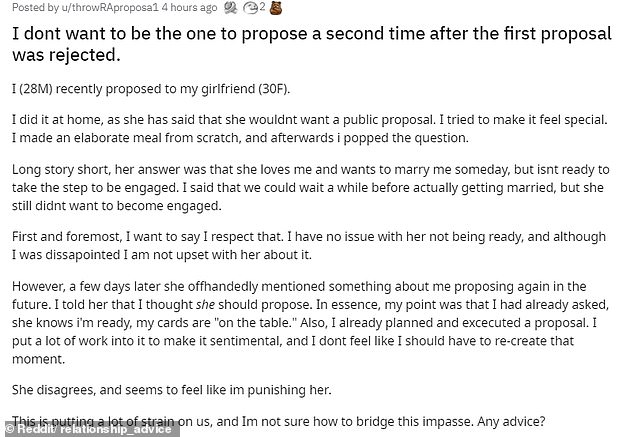 Posting on Reddit, the man explained he wants his girlfriend to propose when she’s ready to get married

A stream of initial responses to the thread agreed with the suggestion that the girlfriend should propose when she’s ready to be engaged.

One person wrote: ‘You proposed because you are ready. Since she isn’t ready, she rejected. Fine and all right. Now she already knows you are ready, so let her propose when she is ready.

‘She is being weird. This isn’t punishment for anything at all. This is just letting her know she can do it whenever she feels ready. Let her be the one to propose. There is no reason to propose twice to her in this situation.’

Another commented: ‘If someone rejected my marriage proposal I wouldn’t ask them again, period. Maybe it’s prideful but I’d feel too embarrassed.

‘I’d say a future proposal isn’t necessary. When she’s ready she can just say so. You shouldn’t have to propose again, IMO. I also suggest discussing if both partners are ready for marriage before proposing to avoid situations like this in the future.’

However, others argued the man should either propose again in the future to make his girlfriend happy or reconsider their relationship.

‘Now let me get this straight you’re absolutely right here, she wasn’t ready you are so she should be the one to propose now. But looking from her viewpoint, a girl always dreams of being proposed to by the right guy I think she wants this moment with you,’ wrote one.

‘My advice would be be the bigger person here and propose one more time sometimes we have to do stuff for the happiness of our loved one.’

Another commented: ‘Tbh that’s a red flag. I’d reevaluate why she’s not ready, are you guys financially stable and where you want to be in life?

If not, I could see why she might be hesitant but I think she at least owes you a proposal or if you were to propose again, I’d notion that something intricate may be unnecessary.’

A third added: ‘If she didn’t say yes the first time… should you even get married? Maybe I’m a bit tough with this sort of thing, but obviously you’re not on the same page and how long will it be til you are?

‘I guess I’m thinking if I asked my partner and he said no, i’d be pretty heartbroken and like you, would definitely not want to ask again and I don’t know if I’d get over the rejection.’