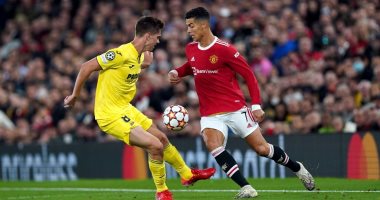 Portuguese international Cristiano Ronaldo, Manchester United player, plays his 900th club match, during the current confrontation with Villarreal, Spain, at Old Trafford, in the second round of Group F of the group stage of the Champions League in the current season 2021. -2022.

According to the official website of Manchester United, Cristiano reached his 900th club football match against Villarreal, scoring 678 goals during that amazing period, with Sporting Lisbon, Real Madrid and United.

Ronaldo also made his debut in the Champions League in 2003 at the age of 18 years and 238 days, where he participated against Stuttgart under the leadership of Sir Alex Ferguson.

Since then, he has scored more goals in the tournament than any other player, with 135 goals during his time at United, Real Madrid and Juventus.

Cristiano Ronaldo has become the record holder for the most participating player in the history of the Champions League, as he raised his score to 178 games, surpassing former Spanish goalkeeper Iker Casillas, who shared the number with him with 177 games each before today’s match.

Ronaldo equaled Casillas’ number after his participation in the last European confrontation against the Swiss Young Boys, where the Don scored his first appearance in the Red Devils shirt in the Champions League after returning to him during the last summer transfer period from Italian Juventus.

Cristiano Ronaldo is the all-time top scorer of the European Champions League with 135 goals in 177 matches he previously played in the tournament before the Villarreal match.