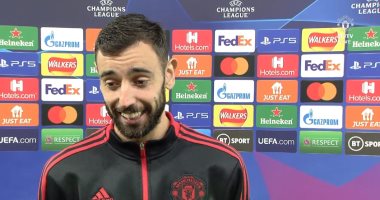 The Portuguese international, Bruno Fernandes, player of the Manchester United team, commented on the difficult victory of his team at the expense of Villarreal, Spain, 2-1, in the match that took place between them on Wednesday evening at Old Trafford, in the second round of Group F of the group stage of the Champions League. For the current season 2021-2022.

After the match, Bruno Fernandez said: “I always thought we could win, even after their goal, I felt we could change the game. After Alex Telles’ goal, the atmosphere was great. The fans were great.” “David de Gea helped us stay in the game with some big saves,” Fernandez added.

Bruno Fernandes stressed: “It is always difficult to play against Spanish teams, they are good with the ball, they played good football and were well organized, sometimes we have to be patient and not rush, the three points were important.”

Bruno Fernandes continued: “We finished scoring two goals and we know that every ball in the penalty area will be dangerous, we know they can score at any time.”

The Manchester United lineup was as follows: