Man Utd fans react with delight to report that Apple is considering buying club for £5.8billion

Manchester United fans have been left delighted after a report that Apple is considering buying their club for £5.8billion.

The Premier League football club has been put up for sale by its owners, the Glazer family, potentially sparking a bidding war among some of the world’s richest people.

Reports have emerged today suggesting that Apple, the technology company with an annual turnover of £326billion, could lodge a bid to takeover the club.

Supporters of the Red Devils have been reacting with glee at the news, which if it comes to pass, would see it become by far the richest club in England.

Some have been joking that given Apple’s huge income from its technology business they could afford to update the clubs notoriously uncared for ground Old Trafford ‘every two months’.

The California-based tech firm has never previously owned a major sports team, but the commercial opportunities provided by United are said to be a primary factor in their interest.

Other interested parties include Zara founder Armancio Ortega, whose estimated wealth of $61.3billion makes him the world’s 19th richest person.

And INEOS founder Jim Ratcliffe, who is reported to be a boyhood Manchester United fan, is also thought to be interested in lodging a bid.

Any potential owner could have to flex their financial muscles simply to buy the club, with the acquisition set to become the costliest in football history, surpassing the £4.25billion fee a consortium led by Todd Boehly paid for Chelsea earlier this year.

Apple CEO Tim Cook is the latest high-profile suitor to be interested in buying Manchester United, according to reports

A top priority for United’s new owner will be to upgrade their famous ground, Old Trafford 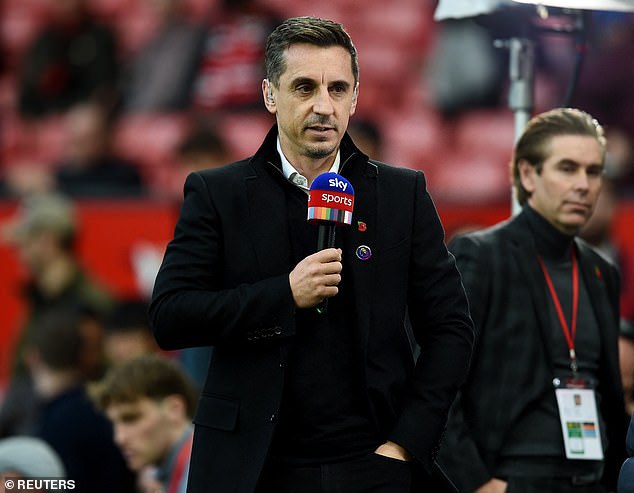 News that Apple could become the next owner of one of English football’s most decorated clubs has left supporters in raptures on social media.

Others jested that the name of the club’s stadium could be changed to ‘The iTrafford’, while others have said with its vast profits it could afford to renovate the ageing ground regularly.

Meanwhile some opposition fans said if it goes through they might have to move from iPhone to Android to stop supporting the club.

However, some have remarked that having Apple as owners would be ‘Glazers 2.0’ and that the tech giant would be more interested in money than success. 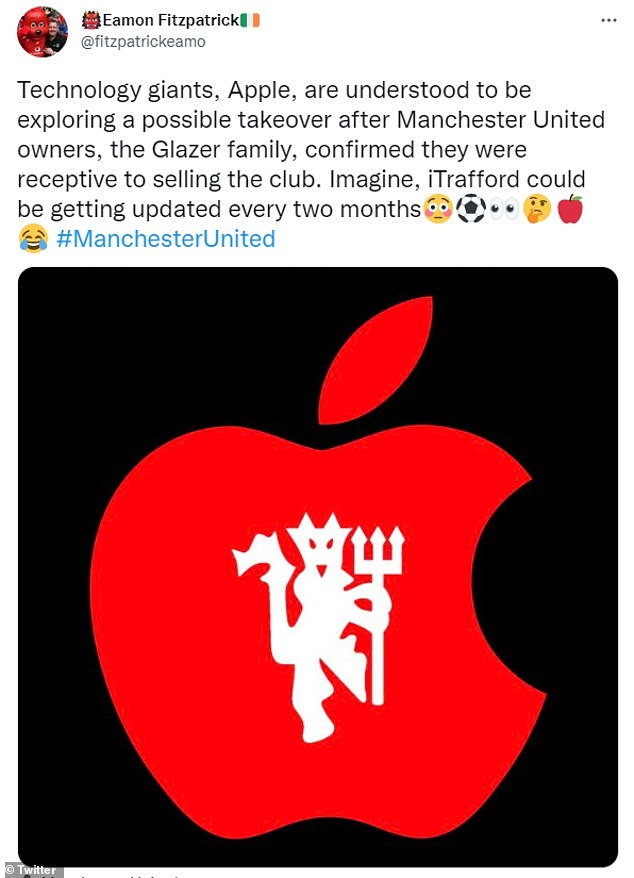 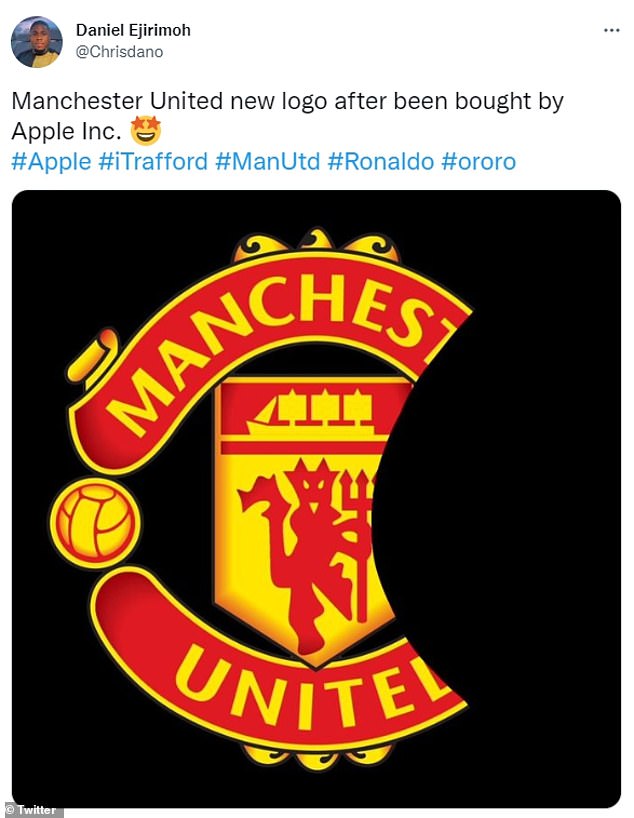 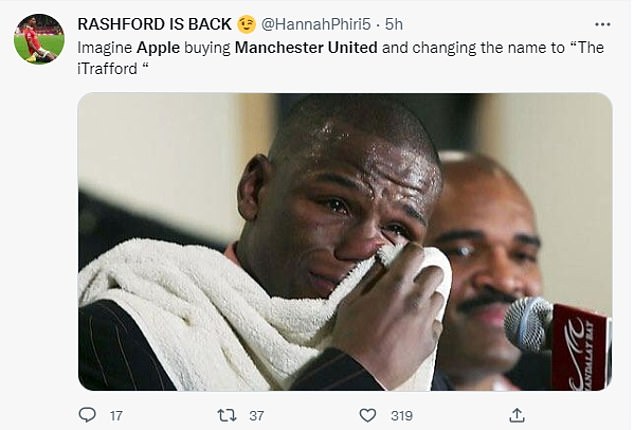 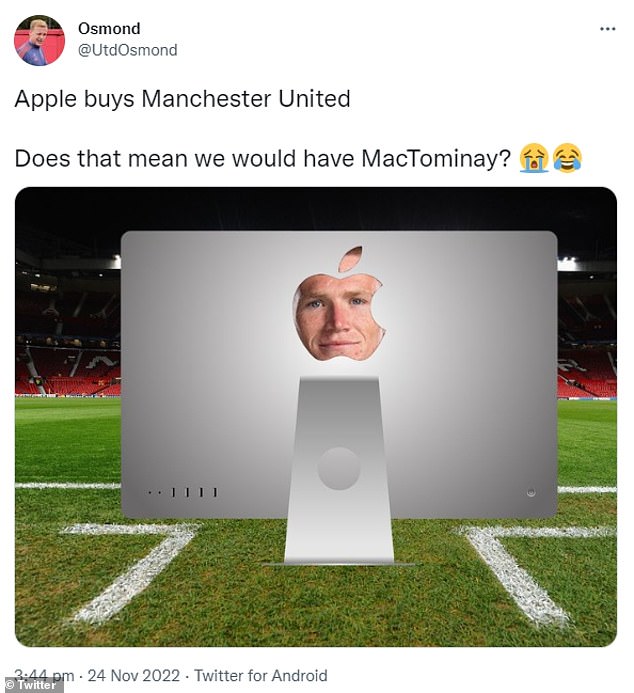 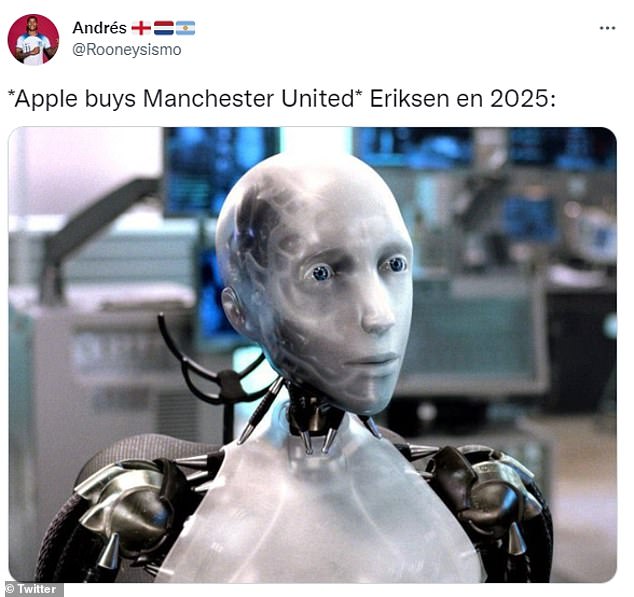 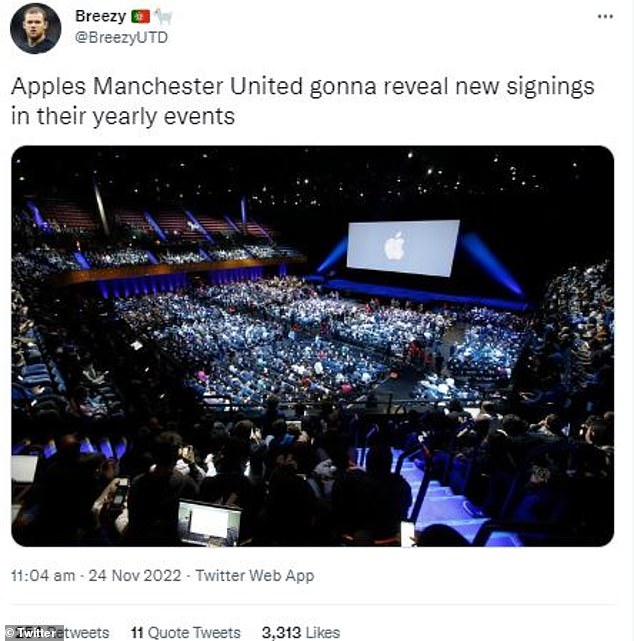 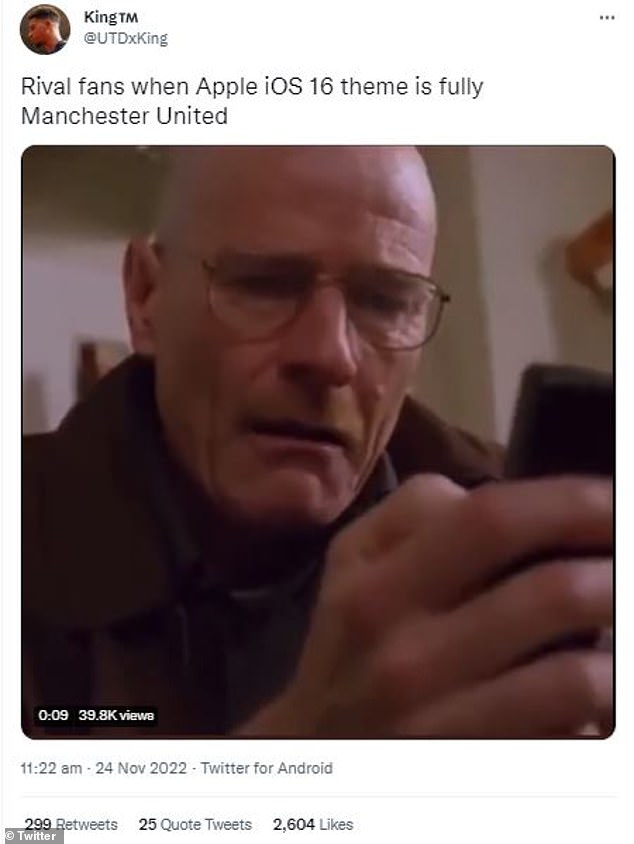 According to Sky Sports News journalist Kaveh Solhekol, any move from Apple to buy the club ‘would be a change in strategy’.

He said: ‘So far we haven’t seen tech companies really buy football clubs. Of course, they’re interested in buying the rights to show their games, but I think it would be a change in strategy if Apple were to buy Manchester United.’

One major issue facing whomever buys United is Old Trafford, the club’s iconic stadium. The venue has long needed a revamp to compete with the biggest clubs around the world.

It is understood that rebuilding the stadium will cost approximately £1.5bn, making it the most expensive football ground in the world – ahead of Tottenham’s new £1bn stadium.

United moved into the ground – nicknamed ‘The Theatre of Dreams’ – in 1910 and have called it home ever since. The stadium was most recently renovated between 2005 and 2006, with 8,000 seats being added.

Red Devils legend Gary Neville has backed calls for the stadium to be rebuilt entirely, when stories first emerged of plans to demolish the current ground emerged back in February.

He posted on Instagram: ‘There is a story emerging from Old Trafford that they might rebuild the entire stadium and I have just been asked what I think of it. I actually think that it would be the right move.

Armancio Ortega, the founder of clothing brand Zara and the 19th richest man in the world, has reportedly thrown his hat in the ring to buy Manchester United.

United’s current owners, the Glazer family, put fellow billionaires on red alert earlier this week when they revealed they are now open to selling the club. 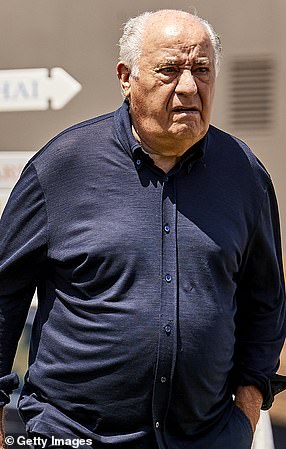 Now, the Manchester Evening News have detailed that Ortega has ‘already spoken to Old Trafford executives’ to declare his interest in buying United.

On a day where it has been revealed that Apple are interested in buying Manchester United in £5.8billion deal, news of reported interest from Ortega will intrigue supporters desperate to see the end of the Glazers reign.

Ortega is 86 and is reported to be worth $61.3billion, according to Forbes’ billionaire rich-list.

The Spanish fashion billionaire has no previous experience running a sports team and has instead made his money in real estate and fashion.

He owns 59 per cent of the Inditex clothing empire, which he started in 1975, and last year appointed his daughter, Maria Ortega Perez, as chairwoman of Zara.

Ortega, who has three children, would represent a shift from the Glazer family, who have owned Manchester United since 2005.

But there is anticipated to be lots of competition for United, as they remain one of the most lucrative companies in all of sport.

‘I think by the time that they have spent money on Old Trafford, the existing one, then I think you would be better off building a brand new, better, super stadium. I do think that Manchester United should always be at the forefront of stadiums, have the best facilities and they have fallen behind.’

With the reports in Daily Star that Apple is interested in buying the club, CEO Cook is just the latest in a line of high-profile individuals who have shown an interest in taking charge at Old Trafford.

Now-Twitter CEO Elon Musk jokingly wrote on the platform this summer that he would be purchasing the club, with the 51-year-old’s post garnering more than 800,000 likes.

UFC superstar Conor McGregor has also thrown his hat into the ring, having previously expressed an interest in taking over the club.

The 34-year-old took to Twitter following the announcement of the European Super League in April of last year, writing: ‘Hey guys, I’m thinking about buying Manchester United! What do you think?’ 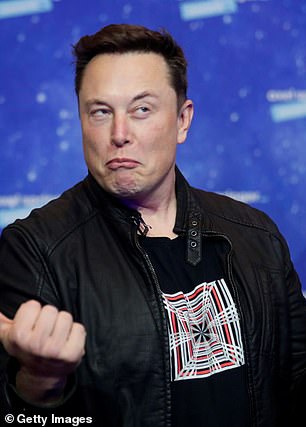 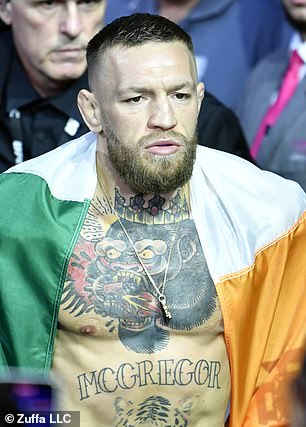 The Irishman added that he would like to acquire a sports team ‘at some stage’.

‘A conversation came up regarding Celtic first to be honest. To acquire shares from Dermot Desmond. I am certainly interested in acquiring a sports team at some stage! Both Celtic and Man United are teams I like for sure. But I am open. I feel I could do big things for a club.’

Joel and Avram Glazer have been largely unpopular among fans since taking charge of the club in 2005.

Backlash over the American investment bankers’ takeover of United was such that some supporters formed the breakaway club FC United of Manchester in protest.

Dissatisfaction over the running of United also led to the green and gold movement with fans donning scarfs depicting the club’s original colours, and resulted in series of protests being staged both inside and outside of Old Trafford.

A club statement from Tuesday outlined the Glazers’ intentions to sell: ‘Manchester United plc (NYSE:MANU), one of the most successful and historic sports clubs in the world, announces today that the Company’s Board of Directors (the ‘Board’) is commencing a process to explore strategic alternatives for the club.

‘The process is designed to enhance the club’s future growth, with the ultimate goal of positioning the club to capitalize on opportunities both on the pitch and commercially.

‘As part of this process, the Board will consider all strategic alternatives, including new investment into the club, a sale, or other transactions involving the Company.

‘This will include an assessment of several initiatives to strengthen the club, including stadium and infrastructure redevelopment, and expansion of the club’s commercial operations on a global scale, each in the context of enhancing the long-term success of the club’s men’s, women’s and academy teams, and bringing benefits to fans and other stakeholders.’

Discontent over the Glazers’ ownership has also seeped into the dressing room, with Cristiano Ronaldo expressing dissatisfaction with the Americans’ stewardship of the club in his explosive interview with Piers Morgan.

Ronaldo – whose contract with the club has been terminated following his wide-ranging chat with the broadcaster – said Joel and Avram Glazer ‘don’t care’ about United.

‘The owners of the club, the Glazers, they don’t care about the club,’ he said. ‘I mean, professional sport, as you know this, Manchester (United) is a marketing club. They will get its money from the marketing – the sport, they don’t really care, in my opinion.’

Ronaldo said he ‘never’ talks to the owners and revealed his fears that the club will remain behind rivals Manchester City and Liverpool for years to come.

‘You have some things inside the club which don’t help Manchester (United) reach the top level as City, Liverpool and even now Arsenal, for example… which is complicated, it’s difficult.’

Speaking in Florida on Thursday, United co-owner Avram Glazer said of United’s sale: ‘As we announced yesterday, the board went through a process and it has decided it is going to look at different strategic alternatives and that’s what we’re doing.’

When it was put to Glazer that most United fans feel his family should have sold the club years ago, he answered: ‘Once again, we are going through a process, we will look at all different strategic alternatives and we will see where it leads us.

‘I appreciate you talking to me tonight and I’m going to wish everyone a happy Thanksgiving.’

Asked about the acrimonious departure of Ronaldo, Glazer said: ‘I will tell you about Cristiano Ronaldo, he is a great Manchester United player and I appreciate everything he has done for the club and I wish him the best of luck in the future.’

Man United for sale: All you need to know as Glazers search for buyers