Father-of-two, 30, who lost his memory when he was hit by a car as a teenager and was left unable to recognise his own family suddenly has childhood memories flood back after hearing The Waterboys’ hit The Whole of the Moon

A father who lost his childhood memories when he was hit by a car has had a breakthrough after listening to The Waterboys’ hit The Whole of the Moon triggered a series of flashbacks.

Thomas Leeds was crossing the road in north London when he was hit by a car, sending him flying over the bonnet and landing on his head in the road.

After being rushed to hospital, it seemed the 19-year-old was relatively uninjured for such a serious crash but days later, it was discovered he had a devastating blood clot on his brain. 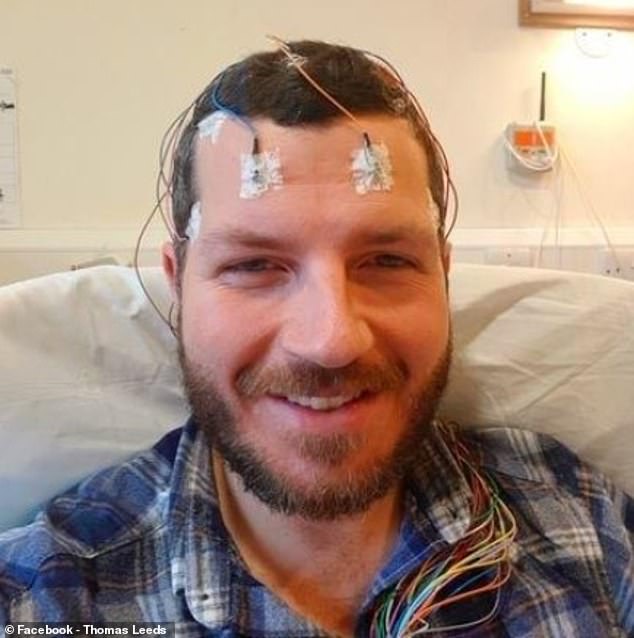 Thomas Leeds (pictured in hospital) who lost his childhood memories after a car crash, has had a breakthrough after listening to a 1985 song which triggered flashbacks from his youth 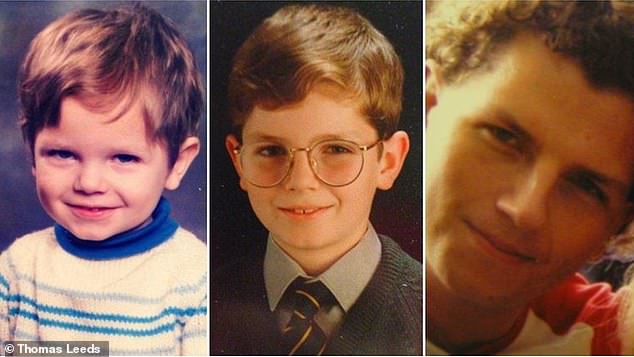 Thomas lost all his childhood memories after the crash. Pictured: Thomas Leeds growing up

The clot required emergency surgery and left Thomas with brain damage that meant he had no memories from before the crash and had also lost the ability to recognise people’s faces – a condition called prosopagnosia.

This meant when he came round in the hospital, he could not even recognise his parents or his five siblings.

Ten years later and Thomas was compiling a playlist for his 30th birthday party when he suddenly experienced a series of flashbacks from his childhood.

The memories were triggered by The Waterboys’ 1985 hit The Whole of the Moon and included a memory of his mother as a younger woman at Christmas.

Now 30, Thomas described the flashbacks as ‘the most magical thing ever’.

As well as memory loss and prosopagnosia, Thomas’ family also noticed a major change in his personality. Where he was once quite reserved, he is now outgoing and emotional. He has also developed epilepsy due to the scar tissue on his brain. 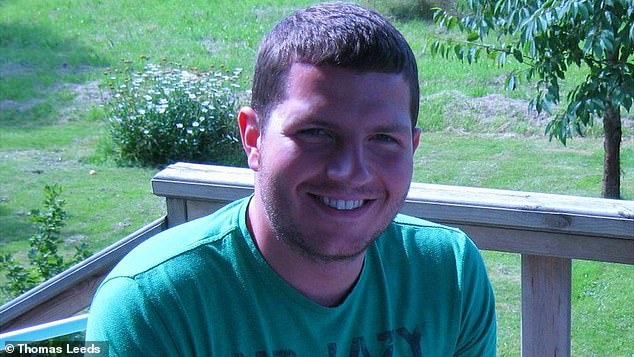 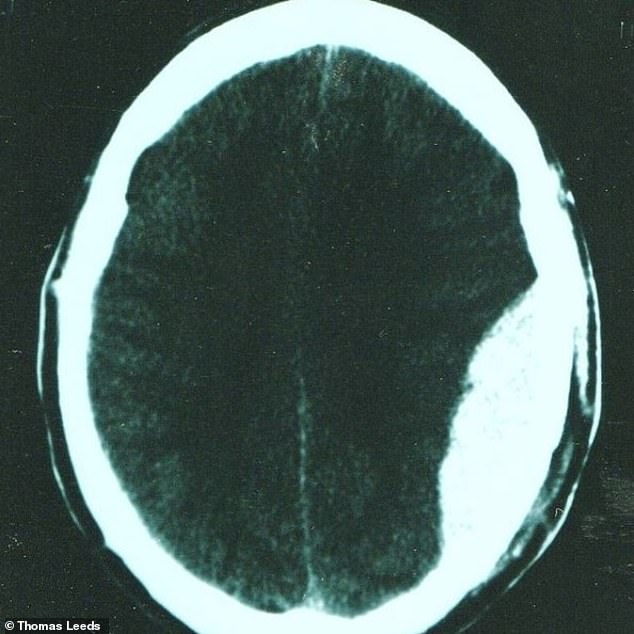 Speaking with the BBC, he describes the first three years after the crash as being in ‘an emotional cocoon’ while he recovered from his injuries.

He said: ‘Everything was wonderful, so big and unlimited, and I sort of remember — it sounds so silly — just sitting in the park under trees.’

In the wake of his accident, Thomas had tried to recover his memories by revisiting locations from his past while friends and family tried to remind him of hobbies and interests he used to have but nothing came back.

Thomas said he started to feel stuck as friends began to start their careers and families.

In a bid to find a soulmate, Thomas began internet dating which was becoming more prominent at the time.

Through a dating app, he met Sophie who had dyed bright red hair which he said made her ‘like a beacon’ and she became the only face he would never forget, even to this day. 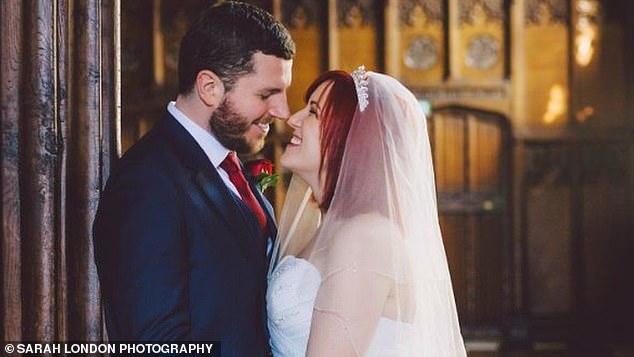 Thomas met Sophie on a dating app and to this day she is the only face he never forgets thanks to her dyed red hair. The couple got married (pictured) and have two daughters together 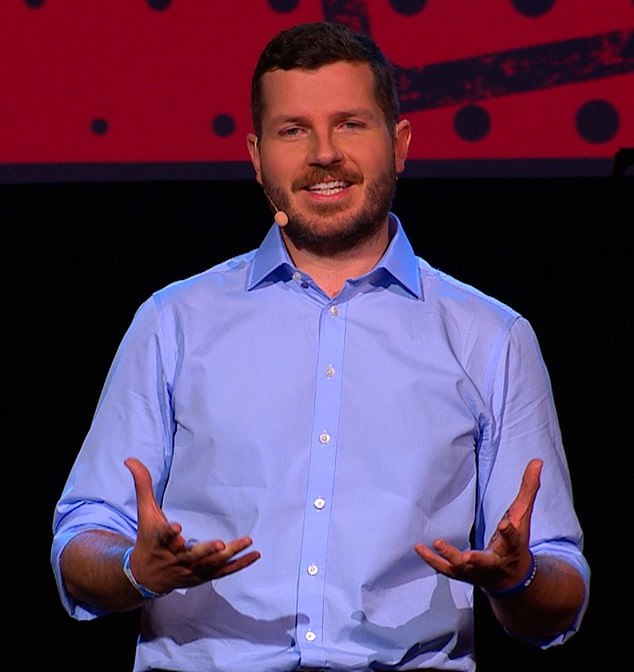 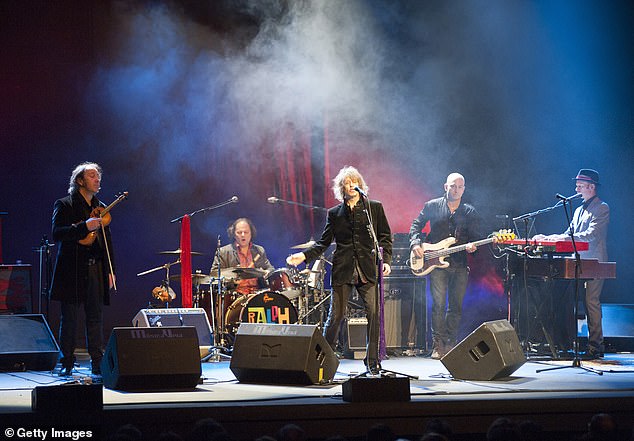 Thomas experienced flashbacks after listening to Waterboys’ hit The Whole of the Moon. Pictured: The Waterboys perform on stage during Festival de Guitarra de Barcelona in 2012

The couple dated for two years before they got married and have now had two daughters together.

His breakthrough came when they were getting ready for his 30th birthday party. Thomas had put together a playlist which included The Whole of the Moon and it was while listening to that song through his headphones that he began experiencing flashbacks.

He told the BBC: ‘It really changed everything for me. It was so short, nothing was said, but knowing that it was real and I’ve got it in my head and it’s not just a story, and it’s not just a grainy photograph … it was a little bit of my beginning.’

Thomas was fortunate enough to retain his ability to read and write following his injury and is now a writer, preparing to publish his first novel.

The fantasy adventure story will feature a protagonist who wakes up with no memory of the past and will be aimed at children aged between eight and 12.

Few successful therapies have so far been developed for affected people, although individuals often learn to use ‘piecemeal’ or ‘feature by feature’ recognition strategies.

This may involve secondary clues such as clothing, gait, hair color, body shape, and voice.

Because the face seems to function as an important identifying feature in memory, it can also be difficult for people with this condition to keep track of information about people, and socialise normally with others.