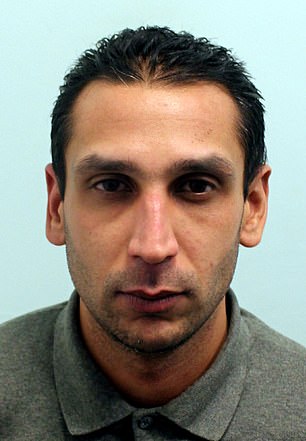 Gurjeet Lall, 36, has been sent to a psychiatric hospital ‘without limit of time’ after stabbing Allan Isichei, 69, to death

A ‘remorseless’ schizophrenic with a history of knife crime was detained indefinitely today for killing a former Wasps rugby player who complained about him spitting in the street.

Gurjeet Lall, 36, repeatedly stabbed beloved grandfather-of-five Allan Isichei, 69, while in a state of ‘acute psychosis’ after failing to take his medication for 20 months.

He had argued with Mr Isichei over spitting on the pavement before stabbing him in the abdomen with a large kitchen knife which he kept in a paper sheath in his pocket.

Lall told jurors he carried the knife ‘to look cool and feel dangerous’.

But he refused to attend court for the sentencing due to ‘anxiety’ and is still refusing to take any anti-psychotic medication at the psychiatric unit where he is being held.

Ordering Lall’s detention in a psychiatric hospital ‘without limit of time’ under the Mental Health Act, Judge Usha Karu, said: ‘I am satisfied that on all the evidence there is a significant risk of harm and that he is dangerous.

‘So far he has expressed the view that he does not wish to take medication, the defendant had not attended court today, at present antipsychotic treatment has not commenced.

‘There is a risk of further psychotic episodes, particularly if he fails to take further antipsychotic medication, it is not clear when a serious risk of psychotic harm would be reduced.’

Siobhan Grey QC, for Lall, said: ‘He had been under a community treatment order, he was sent back to his GP.

‘He went from depot injection to oral tablet form then had a sudden relapse, Dr Lock accepted that carrying a knife is a indicator of that. 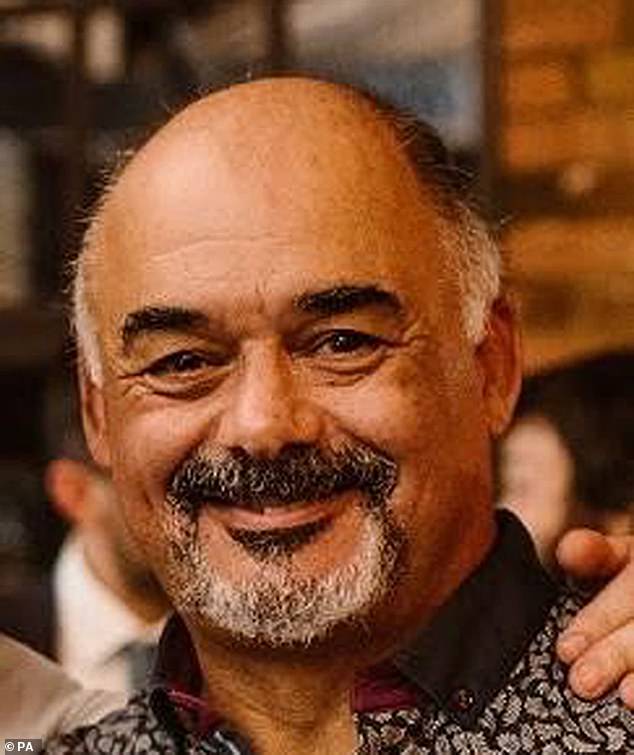 Allan Isichei, 69, was on his way home from the The Plough Inn in Southall, west London in August last year when he saw Lall spit on the pavement nearby and confronted him

‘He was released in 2018, he was texting himself which is a sign of the psychosis, there was a clear deterioration in his mental state. ‘

Lall has a history of knife crime and was jailed for four months in late 2018 after being caught with a knife at the bus station at Heathrow Airport ‘to ward people off’ just six months before the murder, Inner London crown court heard.

A collection of unopened antipsychotic medication boxes was found in his home after the killing which he had collected on time for at least 20 months.

Mr Isichei had gone for a beer at this local, The Plough Inn in Southall, west London, on 24 August 2019 and encountered Lall outside.

The part-time rugby coach, who was a prop forward for Wasps rugby club in the 1970s and 1980s, was captured on CCTV walking past Lall who spat on the pavement.

After being confronted Lall then spat again, causing an argument during which he drew an 11cm long knife in a paper sheath in his right-hand pocket before repeatedly stabbing Mr Isichei.

An ambulance was called to take him to hospital was forced to stop because Mr Isichei’s condition was critical.

A helicopter ambulance arrived and a thoracotomy was performed on the victim’s chest but he died an hour and a half later. 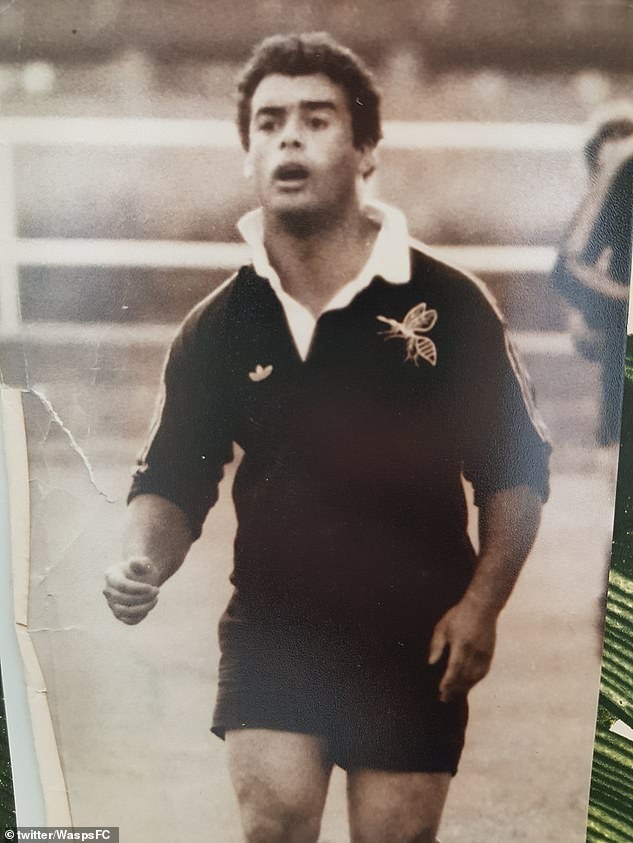 The former Wasps prop forward, pictured, had enjoyed a bottle of beer in the pub’s beer garden before returning to his Southall home, a short distance away 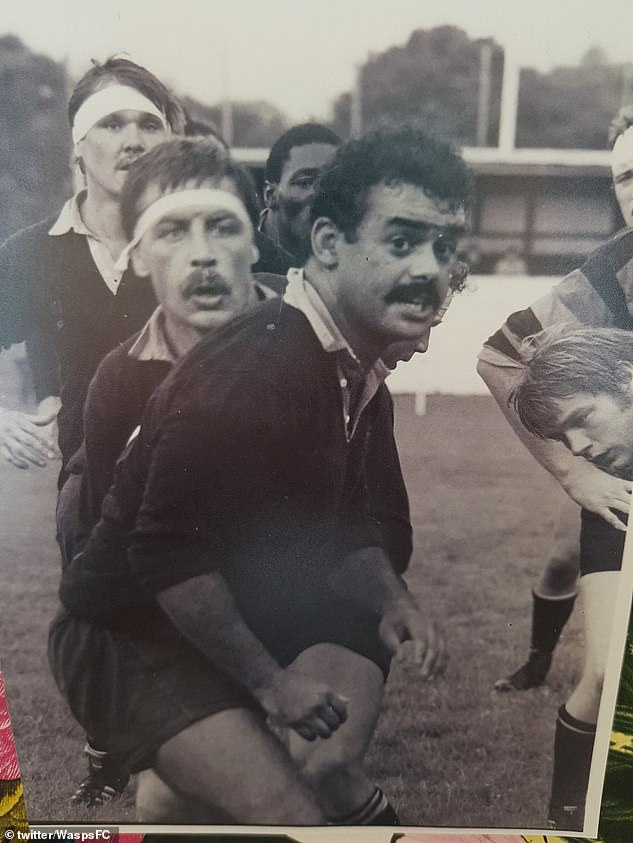 DIJamie Stevenson of the Met’s Specialist Crime said: ‘Allan was a creative and constructive man, living a full and active life through his sport and music. His loss is immeasurable, and is of course most felt by his loving family, who still grieve for him and will do so for a very long time to come’

Police followed a trail of blood from the scene back to Lall’s address at Vine Cottages, Hanwell.

He claimed he was acting in self-defence in a statement to police made six days after the attack.

Giving evidence Lall claimed the victim was accidentally killed when the 69-year-old ‘lunged’ at and fell on to the blade.

Lall claimed he punched Mr Isichei in the stomach with his empty hand and the knife only went into his stomach when the victim fell on top of him.

He claimed the building company boss had threatened to ‘smash his head’ and ‘throw him over the wall,’ before the fight.

Lall also claimed the victim had called him a ‘P-ki’ in court – something he never mentioned to police.

‘He was irritated, angry, had drunk and had a knife on him. He was told off and then he uses a knife he kills somebody,’ said prosecutor Anthony Orchard QC.

Lall has previous convictions for carrying kitchen knives twice in 2014 and 2019 and has also a history of domestic abuse against his mother.

He has 12 years of documented mental illness but he claimed he stopped taking his medication two years ago to ‘get a job.’

At the time of the killing he was unemployed and lived on the sofa of his chauffeur father’s one-bedroom flat.

The court was told Lall stopped taking his medication in October 2018 after being transferred from a community mental health team to his GP.

He was the managing director of his family business, Broadway Construction, based in nearby Ealing, which was founded in 1974 as well as a part time coach at Wasps Rugby Club.

Lall, of Vine Cottages, Southall, was cleared of murder but convicted of manslaughter by reason of diminished responsibility was detained under the mental health act with special restrictions ‘without limit of time’.

Grieving relatives of Mr Isichei, who attended each day of the trial, stood in a circle outside court in silence after sentence was passed.

In a joint victim personal statement written by Emma, Daniel and David Isichei wrote: ‘We have suffered from the tragic loss of our father, who was a kind, generous, and an inspirational man to many.

‘He spent his time putting others before himself and the graphic camera footage shown in court clearly shows he was the victim of someone who chose to carry a knife.

‘Why was a person with a history of carrying knives who was only arrested while carrying one in January 2019 allowed to be back out on the streets unsupervised to carry out this senseless killing?

‘As always the voice of the victim is not heard, we can no longer ask him as he has been cruelly taken away from us. A pain we feel everyday.

‘We believe something must be done, we want to see some sort of positive come out of this.

‘Authorities must answer the questions around why someone with a history of mental illness, was arrested in January for carrying a knife and was released in April with no follow up on whether they were taking the medication that could have made a difference.’

An NHS London spokesperson, said: ‘We would like to offer our condolences to the family and friends of Mr Allan Isichei.

‘We have been in contact with the family and have advised them that we are currently reviewing the case with a view to conducting an investigation in 2021.’

Detective Inspector Jamie Stevenson of the Met’s Specialist Crime, said: ‘It beggars belief that a man could go to his local pub for a quick drink on a Saturday evening and not return home, but that is the terrible reality that Allan’s family have been left with.

‘Allan was a creative and constructive man, living a full and active life through his sport and music. His loss is immeasurable, and is of course most felt by his loving family, who still grieve for him and will do so for a very long time to come.

One of Ohio's best restaurants is in a gas station