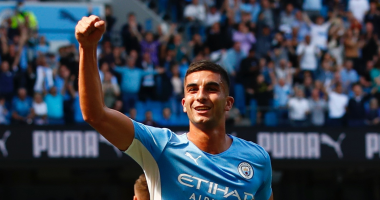 According to the Spanish newspaper, “Sport”, the Barcelona administration offered Manchester City several solutions in order to include Ferran Torres, in the last days of the last summer Mercato, but all these offers were rejected by all City.

The newspaper added that Guardiola insisted on keeping the Spanish winger, whose contract extends until the summer of 2025, especially after the club failed to obtain the services of Tottenham star Harry Kane.

Manchester City signed Torres, the 21-year-old, from Valencia, Spain, in the summer of 2020, in a deal worth 23 million euros, and he played 43 games in various competitions, scoring 16 goals and providing 4 assists.

In a different context, Italian press reports revealed that Antonio Conte, the former coach of Inter Milan, who won the Italian league title last season, is not interested in taking over a position in Barcelona, ​​​​to succeed Ronaldo Koeman, whose departure has become the latest of the five major leagues due to the decline in the results of the Catalan team during the current season. And the “Sky Italia” network said: “Antonio Conte is not accused of taking a job at Barcelona or Arsenal during the current period because he is waiting for a new project next season.”

The report added: “The coach is currently enjoying a vacation after the expiry of his contract by mutual consent with Inter Milan, a few weeks after winning the Italian League title.”