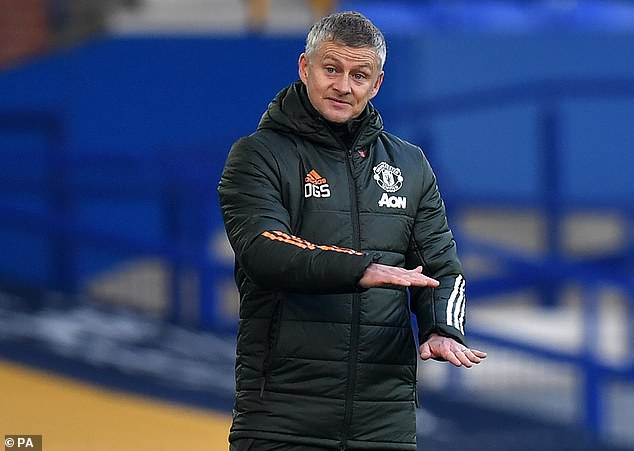 
Manchester United planning a quiet January transfer window despite missing out on Jadon Sancho as Ole Gunnar Solskjaer admits: ‘I don’t predict a lot of ins and outs’

Manchester United boss Ole Gunnar Solskjaer admits he is not planning for the club to be busy in the January transfer market with incomings or outgoings.

The club brought in the likes of Edinson Cavani, Alex Telles, Donny van de Beek in the summer and spent a total sum of £84.6million despite the financial impact of the coronavirus pandemic.

Amad Diallo, 18, will also come into their squad in 2021 as long as United manage to secure a work permit for the Atalanta winger, but the Norwegian boss appeared to suggest the club will not be looking for further signings due to the size of his current squad.

‘It’s hard to predict what the financial situation is, if teams need to sell or if they have got money to buy,’ Solskjaer said. ‘I don’t predict a lot of ins and outs, to be fair.

‘The world, financially, and football world has changed as well, it depends what the injury situations are. I feel very happy with my squad, we’re getting stronger.

‘I still have issues every week when we only have an 18-man squad: who do I leave out? I feel we’re in a good position.’

Executive vice-chairman Ed Woodward and the club will be keen to avoid the mistakes of previous windows which brought a great deal of tension to the club at the beginning of the season amid fan unrest.

Reports last week suggested the club are lining up Everton’s Marcel Brands to be their first director of football following their struggles in recent periods of transfer activity, with the Dutchman’s contract at Goodison Park expiring next year.

Brands revamped the club’s recruitment policy after a number of questionable moves in the transfer market by signing the likes of James Rodriguez for the Toffees in the summer.

Woodward and transfer negotiator Matt Judge have largely overseen United’s transfer strategy in recent years but there has been talk of appointing a director of football for some time.

Amad Diallo, 18, will however join in 2021 as long as United manage to secure a work permit

Former United stars Rio Ferdinand and Edwin van der Sar have been mentioned in relation to the new director of football role.

Angel Di Maria, Alexis Sanchez, Morgan Schneiderlin and Henrikh Mkhitaryan are just three of the players signed at great expense only to flop at Old Trafford.

Covid: People in tier two ‘will have to leave pub after meal’

Covid: People in tier two 'will have to leave pub after meal'