Manchester United are preparing for an eighth European night in Istanbul this week when Ole Gunnar Solskjaer’s side face Istanbul Basaksehir and if history tells them anything, it will not be a trip for the faint-hearted.

Granted, this time round the stands will not be bursting at the seams with supporters, the famous wall of noise synonymous with games in Turkey gone.

Sir Alex Ferguson vowed ‘never to return’ to the city of Istanbul after a frightening night in 1993. Gary Pallister once described a European night in Istanbul as ‘making Anfield look like a tea party’. 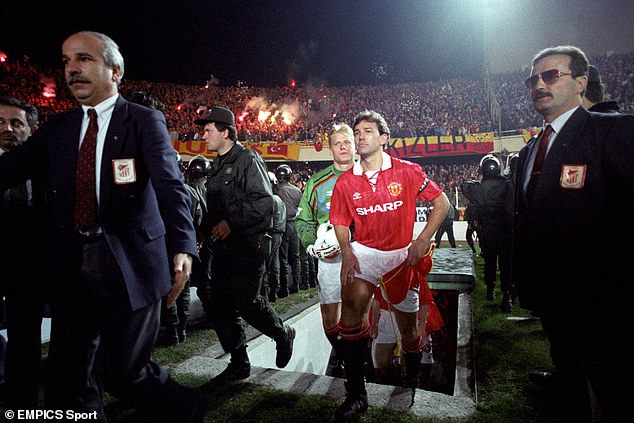 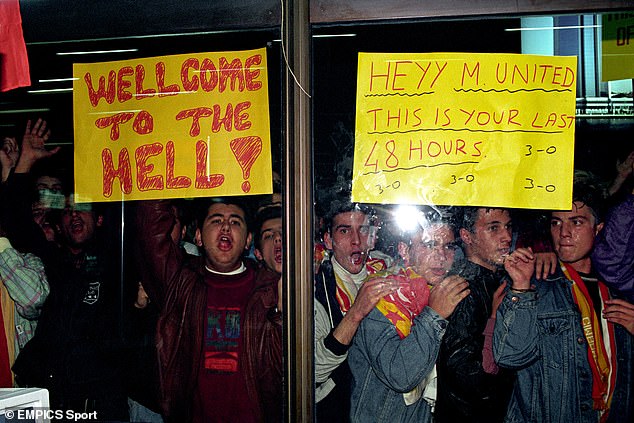 Hostilities are ever-present. Even Jose Mourinho could not resist riling up rabid supporters in 2016 when he said of Fenerbahce: ‘They were playing the Champions League final, we were playing a summer friendly.’

And so trips to Istanbul are like few others on the continent and United’s past should serve as a warning to young stars embarking for Turkey for the first time.

A trip down memory lane serves up a reminder of that brutal night ‘in hell’ back in 1993 where United’s players clashed with pitchside police, a hammering at the hands of Fenerbahce in 2004 and a miserable 2012 night where a warning that ‘No Mercy Will Be Shown’ bore fruit as Ferguson’s side were humbled.

Sportsmail reflects back on some of United’s most famous – and most disappointing – trips to the Turkish city.

Sparks flew in the first leg and as Galatasaray departed Old Trafford having produced a stunning 3-3 draw, they received a sinister warning.

‘They will be waiting for you at the airport,’ Galatasaray boss Reiner Hollmann promised. Little did United know what was to come.

They smiled, looking to appear relaxed, as maniacal Galatasaray supporters thrust themselves up against glass dividers in the arrivals area. 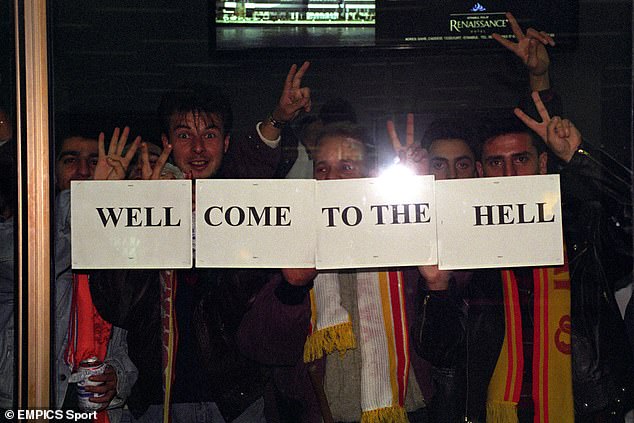 ‘Welcome to Hell,’ read one, now famous, banner. ‘This is your last 48 hours,’ read another.

This was not Maine Road against Manchester City or Anfield against Liverpool. Istanbul was a different world entirely. The ferocious welcome was just the start, too.

Arriving at the hotel, Pallister, who missed the game through injury, recalls arriving at their luxury base and dawdling behind the rest of his team-mates after disembarking the coach.

As he got to the door he was met by a bellboy. Pallister smiled but in return the bellboy ran his across his throat in a slit gesture. There was to be no Turkish delight even off the pitch.

Speaking of their treatment on arrival, he later added in his autobiography: ‘It was a terrifying business which had nothing to do with sport, and can be categorised objectively as an absolute disgrace.’

In all of Ferguson’s time in charge this stands out as the most acidic of tests.

Players were sent out on to the pitch to soak up the atmosphere an hour or so before kick-off at the Scot’s request. Up the stairs they went, through a sea of police officers and there they were. Again, players are seen laughing and in amazement at the wall of noise and the colour of the flares.

Gary Neville, then 18, later described how he felt the Ali Sami Yen stadium was on fire.

As Pallister put it, it ‘made Anfield look like a tea party’ and he wasn’t wrong. 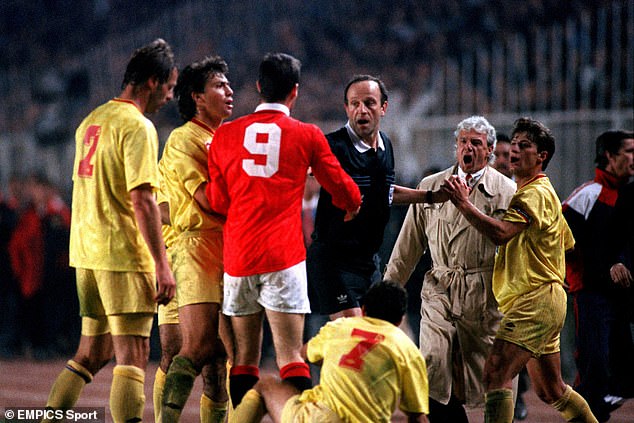 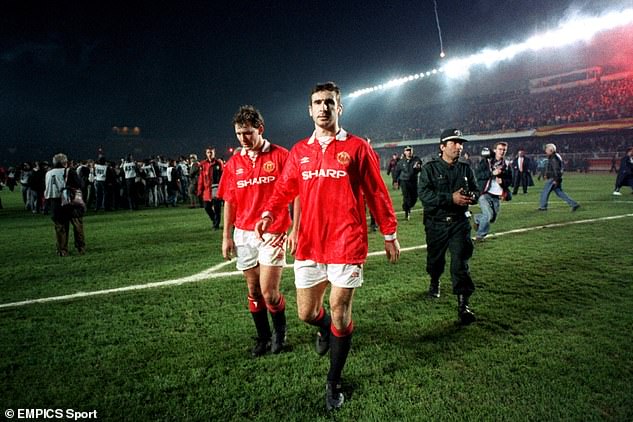 The game itself was largely a non-event for 77 minutes, Schmeichel the busier of the two goalkeepers. Galatasaray, with three away goals in their arsenal, were keen to run the clock down.

That angered Cantona – it didn’t take much, in truth – and the Frenchman decided to kick the ball out of the hands of Galatasaray reserve keeper Nezih Ali Bologlu’s. If that wasn’t enough he then sent him to the floor with an elbow to the chest.

Cantona did not see red but retribution was to follow.

He was later shown a red after accusing the referee of being corrupt – something a UEFA investigation into the game never proved. Cantona was incensed as he was frogmarched off the pitch by a policeman. He wanted revenge.

What followed was a horrifying finale as United’s European exit was confirmed. As they looked to walk down the steps towards the changing room, a number of players reported being attacked by police.

Bryan Robson was cut and Cantona was struck by a truncheon among the melee at the end. All hell broke loose and those warnings at the airport felt as jarring as ever.

‘Eric was determined to sort out the rogue cop who had been wielding his truncheon,’ Keane later said in his autobiography.

‘Eric was a big, strong lad. He was serious. He insisted he was going to kill that f***er. It took the combined efforts of the manager, Brian Kidd and a few of the players to restrain him.’ 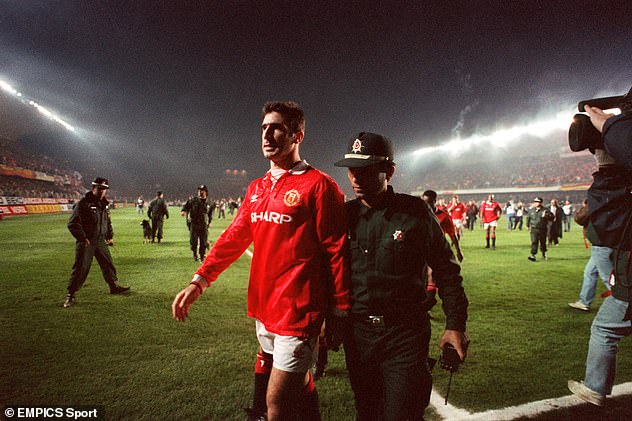 The coach out of the stadium was another moment of incredible violence with rocks and bricks thrown. Steve Bruce recounted how a brick almost came through the window where he was sat. He was incredibly fortunate not to be maimed.

There was also stories of terror away from the squad on the trip as 164 supporters were imprisoned in Bayrampasa jail.

Allegations followed that they were beaten and separated from their possessions before being deported back to the UK.

Ferguson said: ‘We were exposed to as much hostility and harassment as I have ever known on a football expedition.’ He vowed never to return

As it happened, United were drawn back 10 months later. They stayed at the same hotel, faced the same opposition and there were reports players had items stolen.

But nothing has played out since quite like it did on that famous November night 27 years ago.

Now United travelled with much more trepidation to the Turkish city. And why wouldn’t they? Those who were attacked in 1993 were still around and while three years had passed, there were some scars that would never fade.

But this was also a time when young stars began to establish themselves.

Taken David Beckham as one. The tricky midfielder got the opening goal on the night and set up Cantona for the second. Part of the famous Class of ’92, he was emerging as a superstar on the biggest stage. 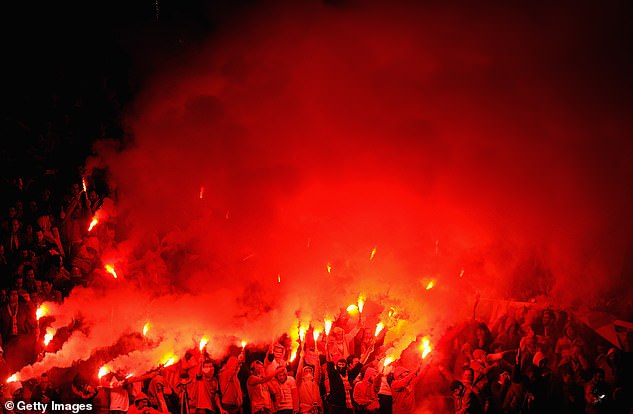 Much was made of the return leg when United suffered their first loss at Old Trafford in UEFA competition in a 1-0 defeat.

But with nothing close to the ‘Welcome to Hell’ experience three years prior – UEFA were threatening expulsion if behaviour did not improve – Ferguson’s side, while they didn’t know it then, were learning to win on the road.

While there were a myriad of moments that led to their famous treble in 1999, it was emerging from trips to Istanbul with a win that proved they could conquer anyone in Europe.

If 1993 was the most scarring, their trip in 2004 was easily the most damning, even if the United side represented a who’s who.

The Guardian described them as ‘Manchester United-Lite’. Come the final whistle, many were condemned in a United shirt.

Hostility here came in the form of local media, furious that Ferguson would disrespect Fenerbahce and leave his main stars at home in Manchester. 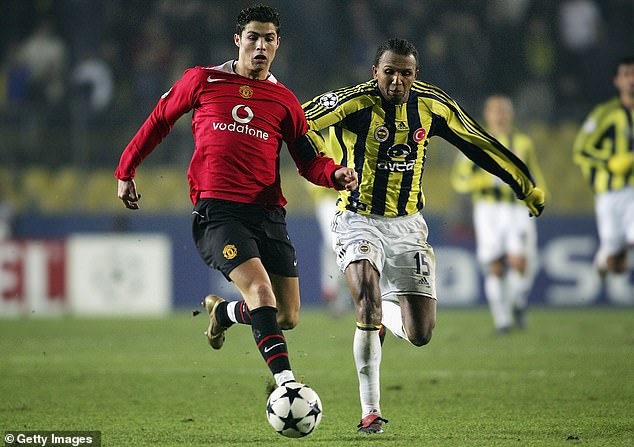 Giggs was given the night off, as was Wayne Rooney. Instead the Turks got Liam Miller and David Bellion.

A midfield of Cristiano Ronaldo, Eric Djemba-Djemba, Darren Fletcher and Kieran Richardson was always a gamble with little upside. Ronaldo was exasperated at the quality around him – and no-one could argue any different.

Getting to half-time at 0-0 felt significant given this shadow XI was so unfancied.

But within 90 seconds of the restart the first hole was made in the ship and United sank – fast.

Tuncay produced a fabulous bicycle kick which left Tim Howard with no chance. It was the first goal United had ever conceded in Turkey and it was worthy of that honour. 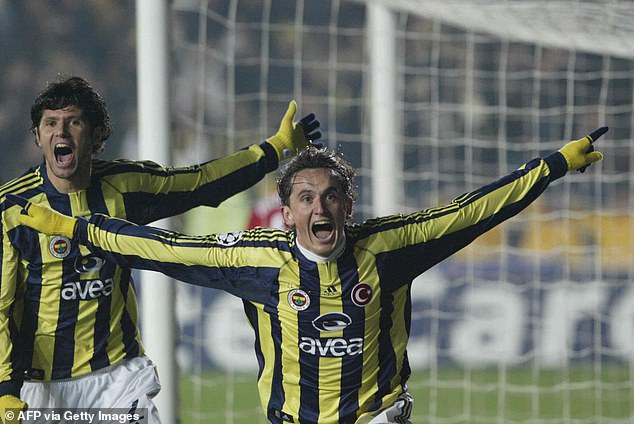 More senseless play was to follow, this time a stupid free-kick given away on the edge of the box and Tuncay met the delivery two yards out – no-one around him – to head in a second.

His hat-trick came on the counter-attack as United were rag-dolled. It was not pretty.

Defeat meant United finished runners-up in the group rather than as winners. Ferguson was criticised but held firm. He left Turkey without a modicum of regret.

‘I don’t regret playing this team,’ he told reporters. ‘Whether we finished first or second, we were always going to have someone tough to face in the next round.’

To paraphrase a Vera Lynn song, Galatasaray and Manchester didn’t know where or when, but these old foes knew they would meet again.

It came in 2012. A United side that had already qualified for the last-16 sent a line-up of incredible inexperience.

The Turkish press against fanned the flames of disrespect. The tone, if it ever needed to be for a trip to Istanbul, was set once more. Riot police blocked the entrance to arrivals at the airport. Glass doors were smashed. Flashbacks of ’93 had never been clearer. 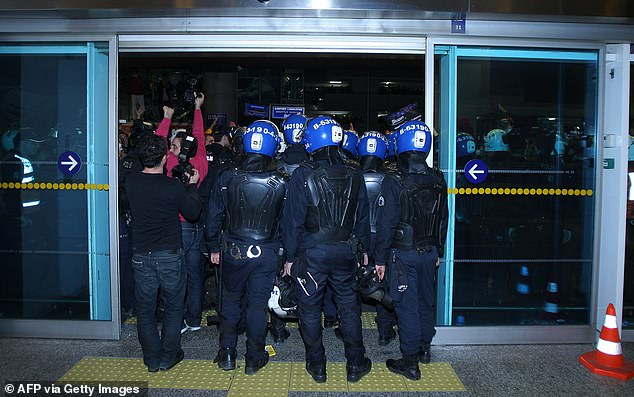 ‘No Mercy Will Be Shown,’ read one flag thrown among the 43,000 supporters.

As the teams lined up they were greeted by a deafening wall of noise and red flares. A red and orange mosaic showed a lion, representing the den that Ferguson’s youngsters had just walked into.

Here was Tom Cleverley and Nick Powell, who was making his first start in the Champions League, here was Danny Welbeck, here was Anders Lindegaard.

It was the third youngest line-up Ferguson had ever picked for a Champions League game. But unlike those in 2004, they were not disgraced, even if Burak Yilmaz won it to end United’s 100 per cent record in the group.

‘Beating Manchester United is important,’ Galatasaray boss Fatih Terim said afterwards. Ferguson claimed he was ‘satisfied’. Nothing quite matched the fever-pitch between these two in ’93. 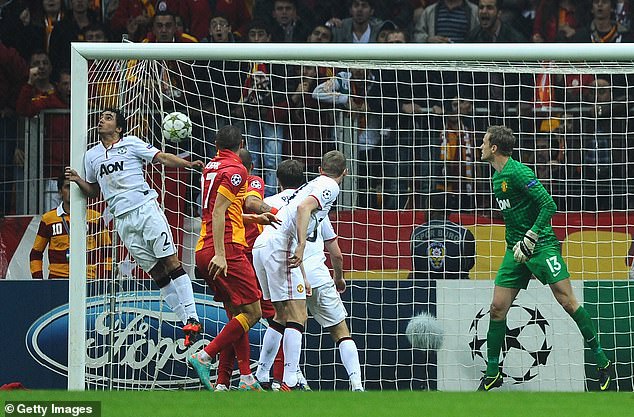 United rarely needed to add much fuel to the fire when travelling to Turkey.

Opposition fans, managers and the media were often more than willing to try out their tactics of intimidation.

But in 2016, United had Jose Mourinho, a man who suffers fools to nobody, and who thrives off confrontation.

It was a night where a wonder goal from Rooney meant nothing more than a consolation.

‘They were playing the Champions League final, we were playing a summer friendly,’ Mourinho bitterly said afterwards. 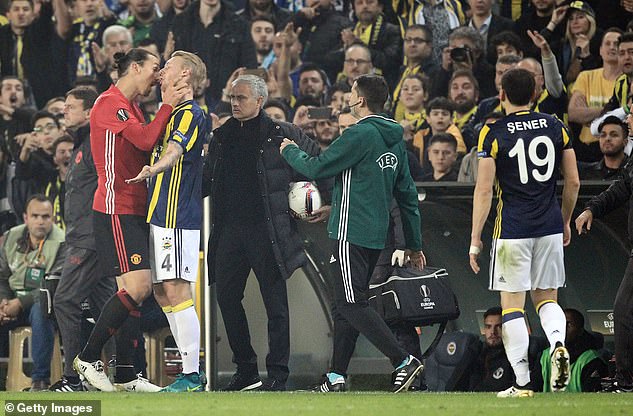 United were stunned after two minutes when a bicycle kick from Moussa Sow sent home fans into a frenzy.

It was a spicy affair, no moment spicier than when Zlatan Ibrahimovic gripped Simon Kjaer – now his team-mate at AC Milan – by the throat after a, let’s say, robust challenge.

Jeremain Lens won it with a free-kick but this was a miserable evening for United and Mourinho.

Wednesday night will be an eighth trip to Istanbul and it will be like no other, for their will be no fans eligible to attend, no hostility from the stands, no crazy welcome at the airport.

But with two wins from their seven visits, United know that ‘hell’ has proven as painful as ever and with fans kept away, now is the time to change the narrative.

Didn't get your first or second stimulus? Here's what to do if you must file a tax return for them.

Tezos (XTZ) price extended its correction from the record highs. Here are the next targets

Armenia accuses Azerbaijan of ‘encroaching’ on its territory