Boris Johnson has incurred the fury of northern politicians and voters after unilaterally plunging Greater Manchester into a Tier 3 lockdown.

Mancunians were fuming after having draconian restrictions forced upon them when financial support talks between Andy Burnham and Downing Street collapsed.

The Prime Minister, who built his 80-seat majority with Red Wall seats in Labour heartlands, was last night sent a coded warning these communities may not forgive.

Social media came alight with the phrase ‘the North remembers’, a Game Of Thrones reference to the rebellious kingdom famous for settling scores.

Although the harshest measures have so far been imposed on the North West – Liverpool and Lancashire are also in Tier 3 – other northern leaders have suggested they are also prepared to play hardball with the Government.

Hartlepool Borough Council leader Shane Moore even said ministers will be told to ‘sod off’ if they try to impose restrictions on his area. 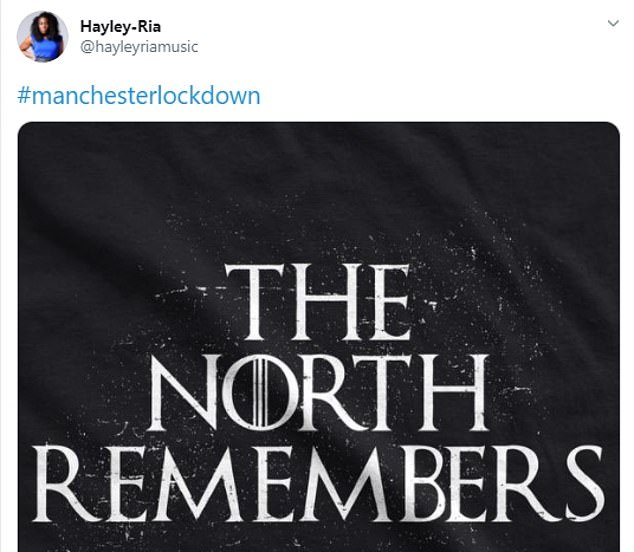 The Prime Minister, who built his 80-seat majority with Red Wall seats in Labour heartlands, was last night sent a coded warning these communities may not forgive 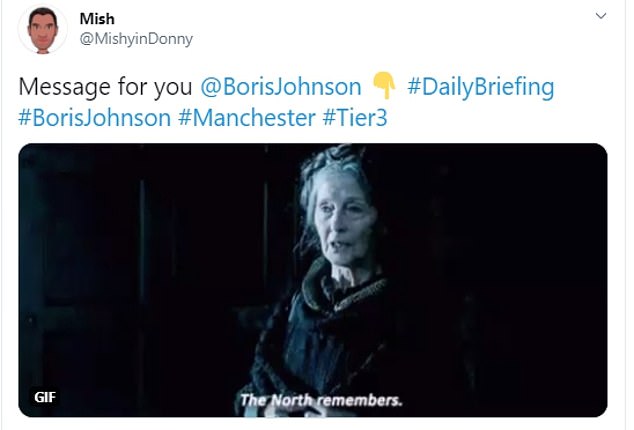 Social media came alight with the phrase ‘the North remembers’, a Game Of Thrones reference to the rebellious kingdom famous for settling scores 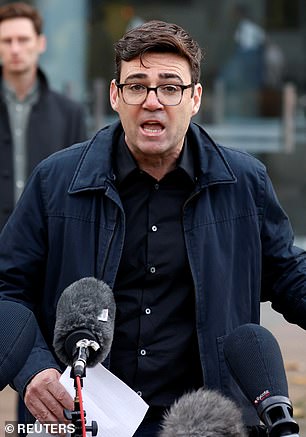 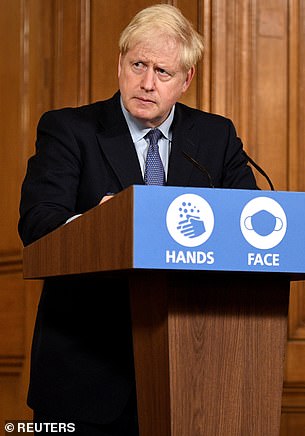 The Prime Minister last night came faced attacks from both Labour and Conservative fronts for imposing curbs on Greater Manchester.

His own backbencher William Wragg, MP for Hazel Grove, said in the House of Commons: ‘I feel a deep sense of disappointment at this collective failure that we have seen today, and quite frankly my constituents in Hazel Grove deserve better.

‘I shall resist the urge to lose my temper because these exchanges deserve a greater elevation of tone, but I say this – the definition of insanity is to continue to do the same thing over and over again in the hope it’ll turn good.

‘We have had three months of interventions in Greater Manchester which have yielded very little results indeed. I cannot help but fear that the medicine is worse than the disease.’

Labour MPs lined up to tear into Mr Johnson, including Manchester Gorton’s Afzal Khan who branded it ‘a complete shambles’.

Lucy Powell said Manchester is a ‘city united this evening’ as she pressed for economic support based on need.

In a fiery late night Commons debate, Labour MP for Manchester Central told Health Secretary Matt Hancock: ‘His Government has really misjudged the mood up here and any less than is needed coming immediately to Greater Manchester for these new restrictions would rightly be seen as spiteful and political, and nothing whatsoever to do with public health.’ 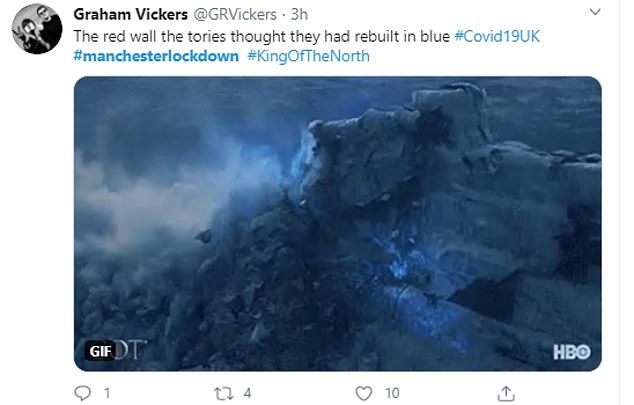 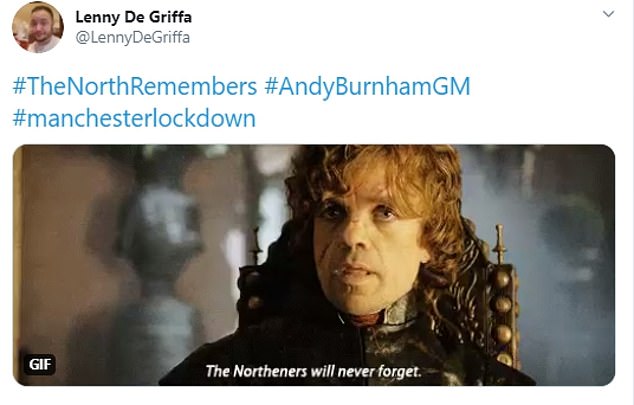 The hashtag #Manchesterlockdown was trending on Twitter, and used in this tweet of a scene from Game of Thrones showing Tyrion Lannister 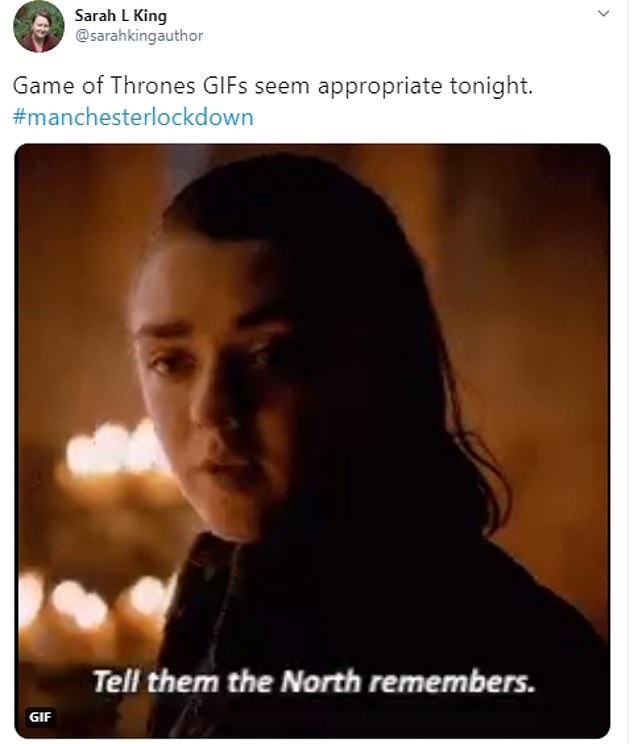 It followed a bruising day for the Government in which local leaders felt emboldened to talk tough.

Hartlepool Borough Council leader Shane Moore said no talks had happened since Friday, when the Tees Valley and the North East were given a reprieve from the toughest measures.

He tweeted on Monday evening: ‘Apparently it was announced in the House of Commons earlier that there were talks happening in relation to Hartlepool & wider Tees Valley going into Tier 3. This is untrue.

‘No talks with us since update on Friday & if anyone suggests it to me this week they’ll be told to sod off.’

Asked if Hartlepool will be placed in Tier 3 next week, Mr Moore replied on Twitter: ‘Not unless I am presented with clear evidence that the current restrictions are not working and that serious hospital admissions are causing strain on local health services.’

He said even taking into account the large number of students who have tested positive for coronavirus, ‘the underlying numbers are coming under control in the North East’. 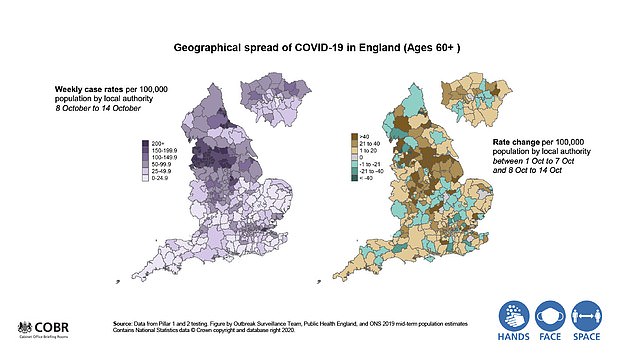 He said: ‘Matt Hancock and his colleagues need to stop dictating to us and start listening to our strategy and to concede that they need to work with us not against us.’

Mr Gannon did not know when the next round of talks was planned, and said previous meetings had been cancelled at short notice.

The North of Tyne elected mayor said coronavirus cases had plateaued or were falling since leaders successfully argued for the North East to have a reprieve from Tier 3 restrictions.

Jamie Driscoll said: ‘We are expecting to meet with Government ministers and officials later this week, but nothing is in the diary and we have had no contact since Friday.

‘Last week we talked through their data, and our data, epidemiology, NHS capacity, and public health interventions.

‘They accepted there was no case for moving into Tier 3. The latest evidence is that across our region, case rates have plateaued or are falling.

‘I want to say a thank you to the public for following the law and the guidelines and staying safe.’

On Tuesday evening, West Yorkshire council leaders said the area would maintain its Tier 2 status after local and national health experts agreed there was no case to impose increased restrictions this week.

In South Yorkshire, talks about the coronavirus alert level were continuing.

A spokesman for the Sheffield City Region said: ‘Mayor Dan Jarvis, the leaders of South Yorkshire’s local authorities and the Government have been in extensive and constructive talks over the coronavirus alert level for the region.

‘These talks continue as all sides seek to agree a plan which will protect lives, jobs and our NHS.’

Mr Jarvis tweeted on Monday night that he was ready to work with the Government but it had not yet offered enough support.

Earlier, Ros Jones, mayor of Doncaster, tweeted: ‘Meeting with Gov today and this week, I’ve been fighting off Doncaster going into Tier 3, but it may only be a matter of time.

‘If we go into Tier 3, then our residents and businesses will need urgent support. I will continue to push for Doncaster to be treated separate from other areas.’

Speaking in a YouTube video on Monday, Greg Fell, director of public health at Sheffield City Council, said: ‘It’s likely that there will be more restrictions put on South Yorkshire at some point in the future. It’s difficult to call when that might be.

Covid: How to protest during a global pandemic