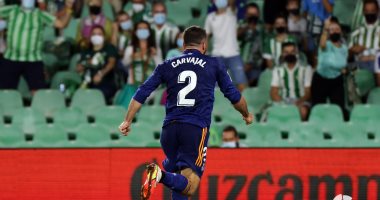 Spanish press reports today revealed the absence of Dani Carvajal, the Real Madrid player, after the injury he suffered in the Valencia match yesterday, as part of competitions in the fifth round of the Spanish League championship..

According to the newspaper “Marca”,for spanish, Carvajal will miss Real Madrid for a month, as he underwent medical tests this morning, Monday, and the results showed that he had an injury to his right calf, and he is scheduled to return after the next international break.

Lucas Vazquez had participated in the place of Dani Carvajal in the 26th minute of the match between Real Madrid and his counterpart Valencia yesterday evening, which ended with the victory of Al-Maringi with two goals against one goal, to be the leader of the Spanish League.

Real Madrid is preparing to face Mallorca next Wednesday in the sixth round of La Liga.

Real Madrid is at the top of the Spanish league standings with 13 points, two points behind runner-up Atlético Madrid, who drew negative on Saturday evening with Athletic Bilbao, while Valencia’s balance stopped at 10 points in third place.