Mark McGowan names HIMSELF as WA Treasurer after election win 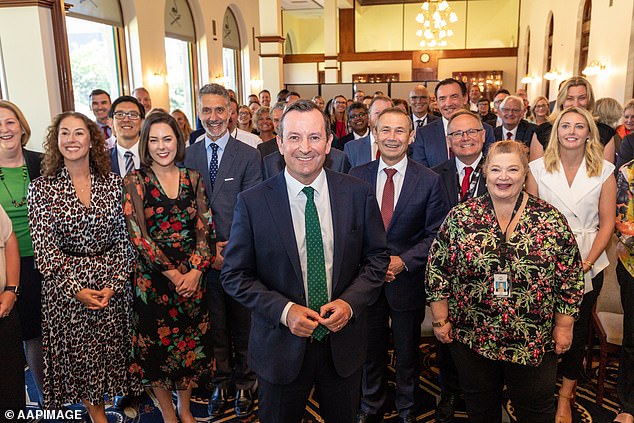 
Mark McGowan has named himself the Treasurer of Western Australia.

The premier – who is affectionately known among supporters as ‘the emperor of WA’ – had 50 colleagues to chose from to manage the state’s finances but nominated himself.

Mark McGowan (centre) has named himself the Treasurer of Western Australia

I’m pleased to announce the allocation of Ministerial portfolios under our re-elected Government.

We have a strong team, with a breadth of experience that will work hard every day to govern in the interests of all Western Australians. pic.twitter.com/MK3wdAZCJq

Mr McGowan, who is on the right of Labor Party, enjoyed record levels of popularity, peaking at 92 per cent last year as he kept Covid-19 out of the state.

Labor’s enlarged caucus gathered on Wednesday in the parliamentary dining room, with the Labor partyroom deemed too small to accommodate all MPs.

‘Being a minister is a privilege and comes with significant responsibilities,’ Mr McGowan said in a statement.

‘I am confident my team will carry out their duties responsibly and diligently, and we will continue to govern in the interests of all Western Australians.

‘My cabinet team includes a mix of experience and renewal, with members from the city and the regions. Our new ministers worked extremely hard during our first term, and have each proven themselves ready to take on a new role on behalf of the WA community.’