Married therapist paid secret lover £23,000 when he blackmailed her

A drugs counsellor paid her secret lover £23,000 when he threatened to reveal their affair to her husband, a court heard today.

The therapist met Peter Thompson, 49, while she was taking a course in Bromley, south London.

Thompson soon began asking the woman for cash to pay bills and rent after their relationship began, the Old Bailey heard.

At first the mother-of-three was happy to oblige but Thompson began to bully her by threatening to reveal their illicit romance to her husband, prosecutors claim.

Terence Woods, prosecuting said, the woman who is not being named for legal reasons, was a married woman in 2016. 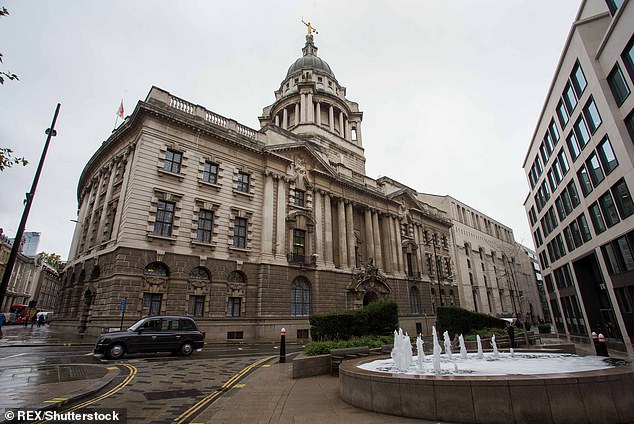 A drugs counsellor paid her secret lover £23,000 when he threatened to reveal their affair to her husband, the Old Bailey heard today

But she became involved in a relationship with Thompson in March or April of 2017.

Mr Woods said: ‘This was a relationship where he took advantage of her feelings for him and extracted from her very significant sums of money.

‘At first perhaps by way of manipulation but thereafter with menaces and threatening her that if she did not he was going to tell her husband about the affair.

‘In about January 2018 he asked her to leave her husband and she declined and indicated that she want to end the relationship.

‘On or about that time he had said to her that he was going to return some of the money that she had given to him.’

She went to his home in Harrow, northwest London in February and asked for some of the money when he was in bed, the court heard.

Thompson is said to have been angered by the request and a row broke out.

‘She will say at this stage he grabbed her by the throat and threw her on to the bed and called her a “slag”,’ Mr Woods said.

‘She felt she was being strangled. He claimed that she had ruined his life. He started to smash up everything in the bedroom of his own home where they were.

‘She tried to get out. She had to beg him not to hurt her. Once again he said he needed money and said that she could not leave until she gave him money.

‘Throughout her dealings with him she was conflicted. She had some feelings for him and sympathy but was frightened by his behaviour towards her.

‘She tried to end the relationship in April 2018, but she was not successful. She continued to send him money, he continued asking for money claiming his benefits had not come through or he needed a bill paying.

‘He often said to her if she did not transfer the money or it did not come through he would tell her husband about the affair. He turned up at her family address. She was taking her family to school.

‘He left a note on her car saying: “I am here, Peter”. He stated he wanted to tell her husband about the relationship.’

Thompson allegedly threatened her with violence again, on 22 June 2018, and told her to transfer money to him.

‘He told her she had 45 minutes before someone was coming to get her and take her away in a van and she would never be seen again,’ said the prosecutor.

‘He then called her husband with her phone and said to him that he was with her and they were in love.

‘She eventually got home and told her husband about what had happened.’

Jurors were told her husband paid more than £6,000 to Thompson to get him to leave her alone.

The police began an investigation in July 2018 and asked for Thompson’s bank details, the court heard.

‘It became apparent from that material that a very substantial amount of money had been transferred from her accounts to his accounts over a 15 month period, April 2017 to July 2018,’ added Mr Woods.

Thompson, of Waller Drive, Northwood, Harrow, denies one count of blackmail and two of false imprisonment.