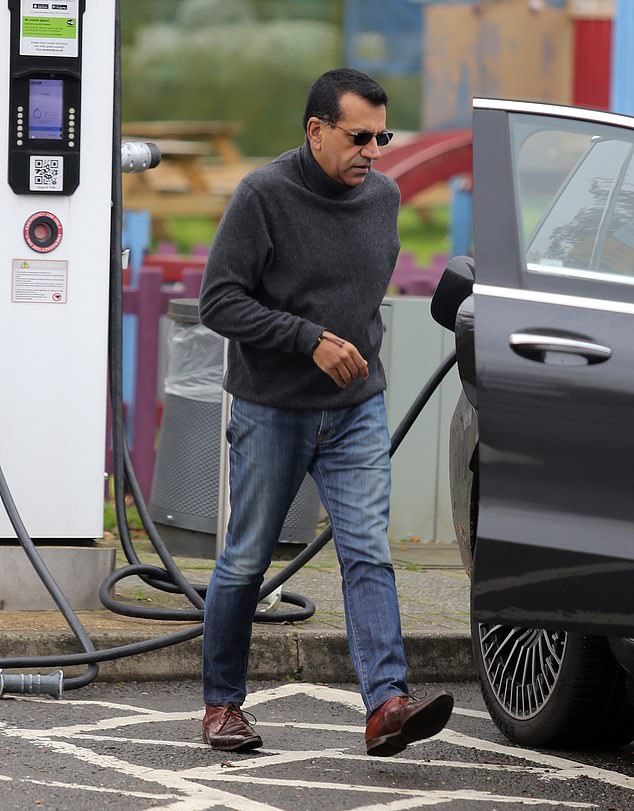 
Martin Bashir was looking ‘fit and well’ as he charged up his electric-powered Mercedes after fleeing London.

The under-fire journalist spent half an hour re-charging his SUV at a petrol station.

An onlooker said: ‘He looked slim and fit, and was walking around no problem. He was with his wife and she got some coffees and they sat talking for a while as the car got its charge.

‘He didn’t seem to have a care in the world.’

The under-fire journalist spent half an hour re-charging his SUV at a petrol station. Bashir and his family left London last Friday. Removal men packed up their £2million home in Maida Vale

The house is in the process of being sold, according to filings at the Land Registry.

The 57-year-old BBC religion editor has privately told his work colleagues that the Princess Diana scandal is a ‘sad way to retire’.

A source at the BBC said: ‘He is obviously never going to report for us again.’

Bashir is currently on sick leave from his post, after being struck by coronavirus in the summer and later undergoing a quadruple heart bypass operation.

The BBC said it was unable to ask him any questions about the Diana claims because of his ill health, but he is expected to take part in Lord Dyson’s inquiry.

Asked for an update on Bashir’s health, a BBC spokesman said yesterday: ‘Martin Bashir is signed off work by his doctors – he is currently recovering from quadruple heart bypass surgery and has significant complications from having contracted Covid-19 earlier in the year.’

His appearance came as Prince William last night hailed the appointment of a retired top judge to ‘unearth the truth’ about his mother’s Panorama interview.

He said Lord Dyson’s Princess Diana inquiry was ‘a step in the right direction’.

The former Supreme Court judge was unveiled by the BBC yesterday as the eminent head of a probe into allegations of forgery, deceit and cover-up surrounding Martin Bashir’s scoop with Diana.

Mr Bashir allegedly peddled 32 lies and vile smears to the vulnerable princess to clinch his explosive 1995 Panorama interview in which she famously said: ‘There were three of us in this marriage.’

The former Supreme Court judge was unveiled by the BBC yesterday as the eminent head of a probe into allegations of forgery, deceit and cover-up surrounding Martin Bashir’s scoop with Diana. Pictured: A still image from the famous 1995 interview

William, who was 13 when the interview rocked the Royal Family, tentatively welcomed the probe. ‘The independent investigation is a step in the right direction,’ he said.

‘It should help establish the truth behind the actions that led to the Panorama interview and subsequent decisions taken by those in the BBC at the time.’

A source close to the Duke of Cambridge added: ‘Well of course this is in part about protecting his mother’s legacy, so it is a very personal matter for William.

‘He has kept a close eye on what’s unfolded but believes things are moving in the right direction.

Prince William has released a statement today. Pictured: The statement in full

‘The BBC has kept him informed appropriately. In the end, what he wants is the same as everyone else – for the truth to be unearthed and any appropriate action taken.’

The Mail understands William has maintained channels of communication with the BBC over the past fortnight.

This has kept pressure on the broadcaster to ensure it found an authoritative enough figure to probe his concerns about how his mother was treated.

Diana’s brother Earl Spencer – who has been demanding an inquiry into the ‘sheer dishonesty’ – yesterday told friends he was pleased such a senior retired judge had been appointed.

His appointment is a major coup for the BBC in proving it is serious in getting to the bottom of how the interview with Diana was obtained and whether Mr Bashir broke strict guidelines.

Lord Dyson said: ‘This is an important investigation which I will start straight away. I will ensure it is both thorough and fair.’

Earl Spencer has revealed a jaw-dropping string of lies Mr Bashir allegedly peddled to gain Diana’s trust, including cruelly playing to her paranoias by pretending he had evidence her staff were spying on her to newspapers and MI5.

The interview led to the Queen demanding that Charles and Diana swiftly divorce. The princess died in a car crash in August 1997, long after she had lost her royal protection officers.

Prince William (pictured with his mother Princess Diana at Wimbledon), who was 13 when the interview rocked the Royal Family, tentatively welcomed the probe. ‘The independent investigation is a step in the right direction,’ he said

After two weeks of damning revelations in the Mail, the BBC’s new director-general Tim Davie pledged yesterday: ‘The BBC is determined to get to the truth about these events and that is why we have commissioned an independent investigation.’

Its formal terms of reference include finding out ‘what steps did the BBC and in particular Martin Bashir take with a view to obtaining the Panorama interview’ including ‘the matters published in the Daily Mail on 7 November 2020’.

That day’s Mail exclusively revealed the extent of the lies Mr Bashir is said to have fed Diana when they met in 1995.

To secure his interview, he allegedly said her bodyguard was plotting against her, her friends were betraying her and MI6 had taped Charles and his private secretary planning the ‘end game’.

He is said to have falsely claimed Charles and nanny Tiggy Legge-Bourke went on a secret holiday together and that the heir to the throne was ‘in love’ with her.

Mr Bashir allegedly lied that Prince Edward was having treatment for Aids and the Queen was a ‘comfort eater’ with ‘heart problems’.

Earl Spencer kept meticulous notes which are expected to form key evidence. At an earlier meeting, Mr Bashir showed him fake bank statements he ordered a blameless BBC graphics artist to forge, purporting to show Earl Spencer’s security head was in the pocket of a newspaper group.

At the time, Lord Hall – who went on to become director-general – conducted an inquiry, branded a ‘whitewash’ by critics, which exonerated the BBC .

Mr Bashir, 57, now the BBC’s religious editor, has been off sick with coronavirus and heart problems.

He is understood to have indicated that he will give evidence to Lord Dyson.

Former head of royal protection Dai Davies said: ‘It seems obvious to me that the BBC has admitted fraud because its agent – Martin Bashir – faked bank statements for the purpose of gaining an advantage. It’s a simple breach of the law. There is no excuse for Scotland Yard not to investigate.’

A BBC source said: ‘At no stage has anyone at the BBC admitted forgery or any other criminality.’

Patrick Williams taken by Bulls with No. 4 pick in NBA draft

Patrick Williams taken by Bulls with No. 4 pick in NBA draft