Dustin Johnson sunk his four foot putt on 11 and allowed himself the tiniest fist bump with Austin, his caddie and younger brother. Well, it wouldn’t do to get too emotional.

Back in the studio, analysts were discussing the mental attitude required to close out a Masters. Definitely doesn’t do to overthink it, they concluded. Needs something of a clear mind. Stay in the present. Not the sort of player to get in his own way, as Rory McIlroy would have it.

You know what they’re saying, yes? It helps to be dull-witted. And that’s the perception of Johnson. That inside his skull, like that of Homer Simpson, is a monkey playing cymbals. 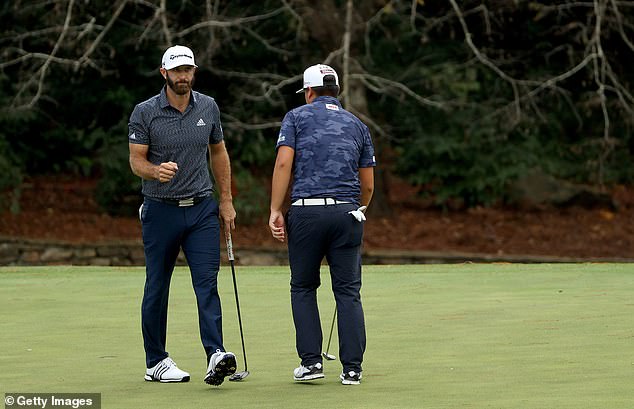 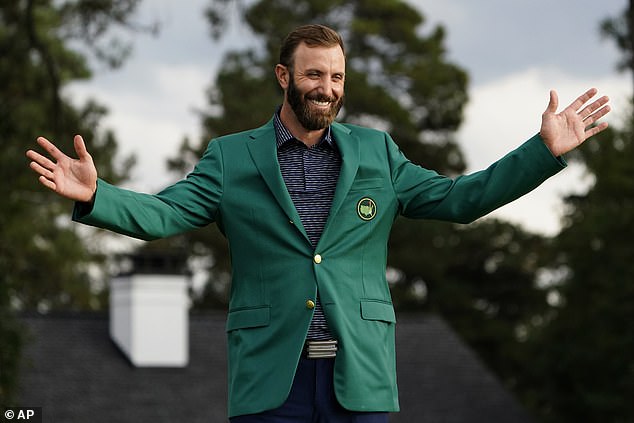 ‘He’s so dense light bends around him,’ wrote Rick Reilly, the celebrated sports correspondent. ‘He seems to have all the cares and worries of a six-year-old with a Fudgsicle.’

Yet is that strictly true? On Sunday, Johnson played one of the most controlled and intelligent final rounds Augusta has seen to win the Masters. His course management was exceptional, as were his numbers, which set a new record across four days, the first player to reach 20 under par.

He won the strokeplay by a mile, and the matchplay too, because when he was challenged by playing partner Sung-jae Im, his lead cut to a single shot, he faced him down on the 6th green, birdie for bogey, and moved away again. 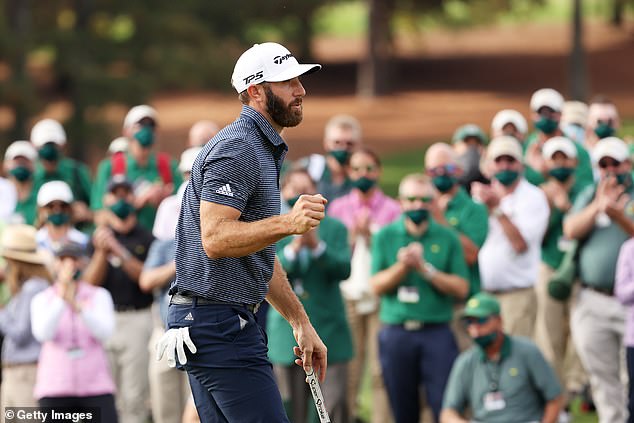 Equally, the idea that a chuckle-headed Johnson strolls on without a care, no matter his status, no matter the challenge, seems erroneous. This was the fifth time that Johnson went to sleep on a Saturday night as the leader of a major golf tournament, and on the previous four, he then lost.

So maybe beneath that taciturn exterior, that absence of emotion, that supposed intellectual dormancy, there is a pounding heart and senses working overtime after all.

Johnson is exactly the type to get in his own way — or he was, once. Might this, then, be the fork in the road? Might this be the victory that at last allows Johnson to deliver on his potential, at 36?

Holding on under the pressure of a Sunday back nine at Augusta, the point at which old hands say the competition proper starts. Is this where he changes his narrative as the choker, the flake, the underachiever? 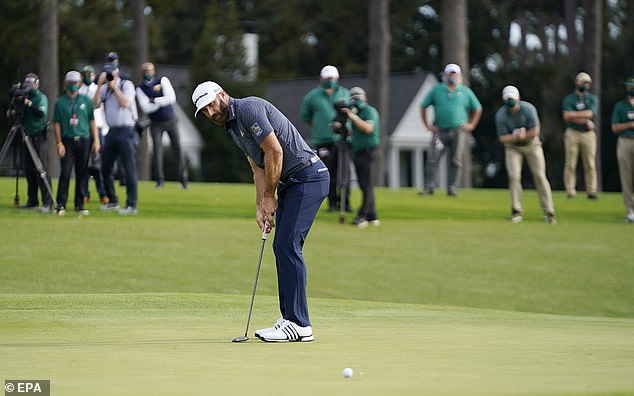 For, really, what were we worried about? It was February the last time Johnson shot over par on the last day of a tournament. No player with a score of -14 or better after three rounds had ever failed to win the Masters, and this was the world No 1, a player claiming to be in the form of his career, with six straight top six finishes — five of them in the leading two.

Why then, as Im made his inroads, as Cameron Smith gamely charged from further down the field, was there the feeling the allegedly nerveless Johnson could wobble horribly again? History. His history.

In 2010, he led the US Open at Pebble Beach by three and had given up that advantage by the second, when his thought processes were so calm and rational he elected to play out of deep rough left-handed. A triple bogey resulted and then a double bogey at the third hole. His final round was 82.

At Chambers Bay in 2015, another US Open, he played a second shot on the last that was so good he was putting for eagle, before taking three to get down from 12 feet on a famously poor surface, handing the prize to Jordan Spieth. 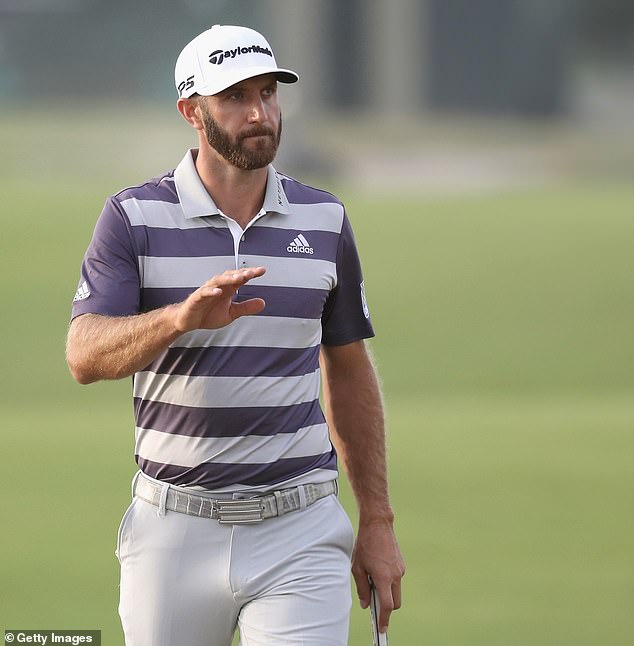 Johnson started the final round at Shinnecock Hills in 2018 — a third US Open disappointment — in a four-way tie at the top of the leaderboard, but lost by two shots to Brooks Koepka. And most recently, this August, he lost the outright lead once more again at the PGA Championship, where he ended up tied second behind Collin Morikawa.

It’s a litany of disaster. So how good is Johnson, really? He’s one of the best, ever. He is in an elite group of three golfers who succeeded in winning a PGA Tour event in each of his first 13 seasons as a professional. The others are Tiger Woods and Jack Nicklaus.

In that time, Woods landed 14 majors and Nicklaus 12. Coming to Augusta this week, Johnson had won a single major, the US Open in 2016.

Yet that year, he faced a different type of pressure. On the final day, he began his round four shots behind the leader, Shane Lowry. He wasn’t even in the last pair, making his way to the front from tied third.

On Sunday brought a completely separate narrative, Johnson out in front, the field shooting at him. Admittedly, from distance. A four shot lead is a significant cushion. And those closest were mostly players without a major, and even Augusta rookies such as Im. 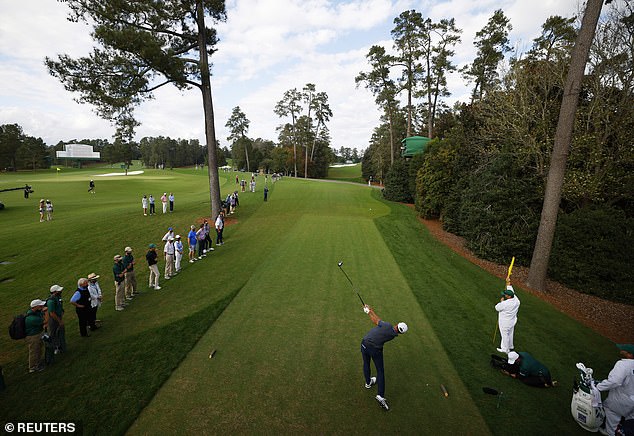 Unlike the four disappointments Johnson out in front on Sunday, the field shooting at him

Yet many majors have been lost by the player whose major it was to lose. Several by Johnson.

With hindsight, we now see yesterday’s procession was never in doubt — or at least once Johnson overcame his early nerves. On the back nine, where so many dreams have vanished, he just became stronger and stronger, reverting to the unfussy, uncomplicated Johnson, straight and long from the tee, his short game outstanding, his focus laser-like.

His command of the competition was such, he had the privilege of walking down the last with a five shot lead. It is testament to his achievement that Smith became the first man in Masters history to shoot four rounds in the 60s, yet couldn’t get near.

It used to be argued he played too fast, but hurry worked for him here. He walked to his ball, minimal delay, hit and marched on. If he struck a poor shot, and they were rare, he recovered almost instantly. 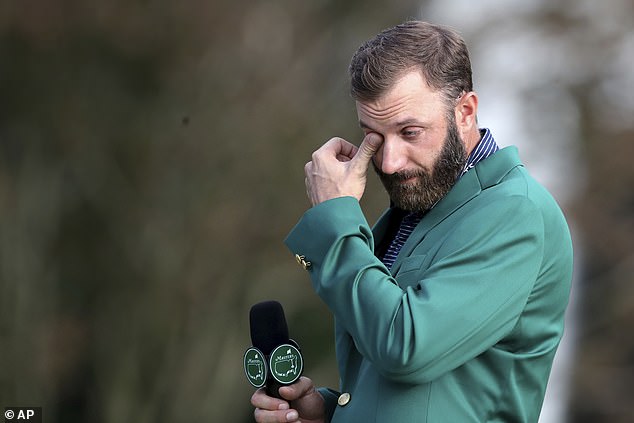 The mantra when majors were slipping by was ‘slow down’, but this pace suited him just fine. ‘He has the perfect demeanour for golf,’ Johnson’s coach Butch Harmon concluded. ‘It’s as if the last shot never happened.’

Playing his second on the 11th, Johnson had significant mud on the left side of his ball. He had the confidence to aim right and wait for the correction in the air. Perfect.

‘It came out just as I wanted it to,’ announced Johnson, delighted. Indeed it did. Everything came out just how he wanted across these four days. He might need to grow accustomed to that feeling, too.

Barbie Extra: The five dolls in Mattel's latest Barbie line each come with a pet

JoJow Siwa cleared up any confusing about coming out and confirmed she's a member of the...