Supermarkets can sell only ‘essential items’

Only leave the house to shop for food, medicine or take exercise

Most secondary school children will stay at home

Work from home wherever possible

Revellers piled onto the streets of Cardiff this evening to enjoy one last night on the town before Wales goes into a strict lockdown – but social distancing was nowhere to be seen.

Rowdy crowds without masks gathered in huddles and belted out Oasis songs as they tried to make the most of pubs and bars’ last night of service for more than two weeks.

At 6pm on Friday, the country goes into a harsh ‘firebreak’ lockdown until November 9, with people ordered not to leave their homes except for limited purposes such as exercise and all non-essential shops forced to shut down.

However, even existing restrictions were ignored this evening as revellers, many without face coverings, embraced and sang 90s classic Don’t Look Back In Anger outside a Gregg’s bakery in the city centre.

It comes as it emerged that Welsh supermarkets have been ordered to only sell ‘essential goods’ to customers during the country’s 17-day lockdown.

Stores will be told they are unable to sell items such as clothes to shoppers, and to prioritise other products deemed to be more important.

It means a likely return to the scenes witnessed at the beginning of the pandemic when there were rows over the contents of people’s shopping trollies.

Many retailers will be forced to shut as a result of the new regulations, but food shops, off-licences and pharmacies can stay open.

Despite there being just hours before it comes into effect, the Welsh Government was unable to provide clarity tonight on what is defined as ‘essential’ nor how enforcement of the rules would look. 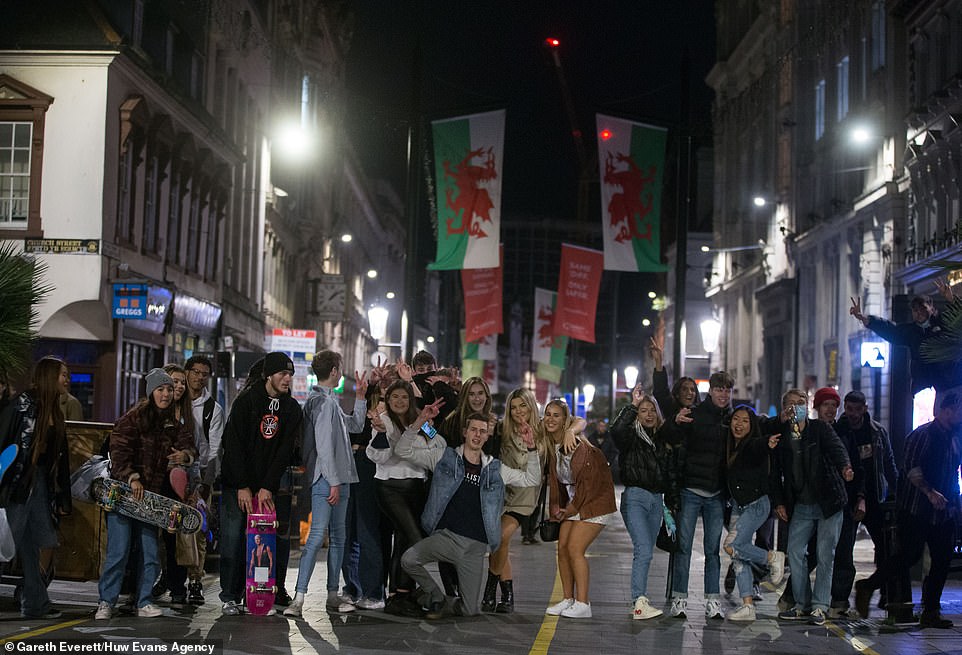 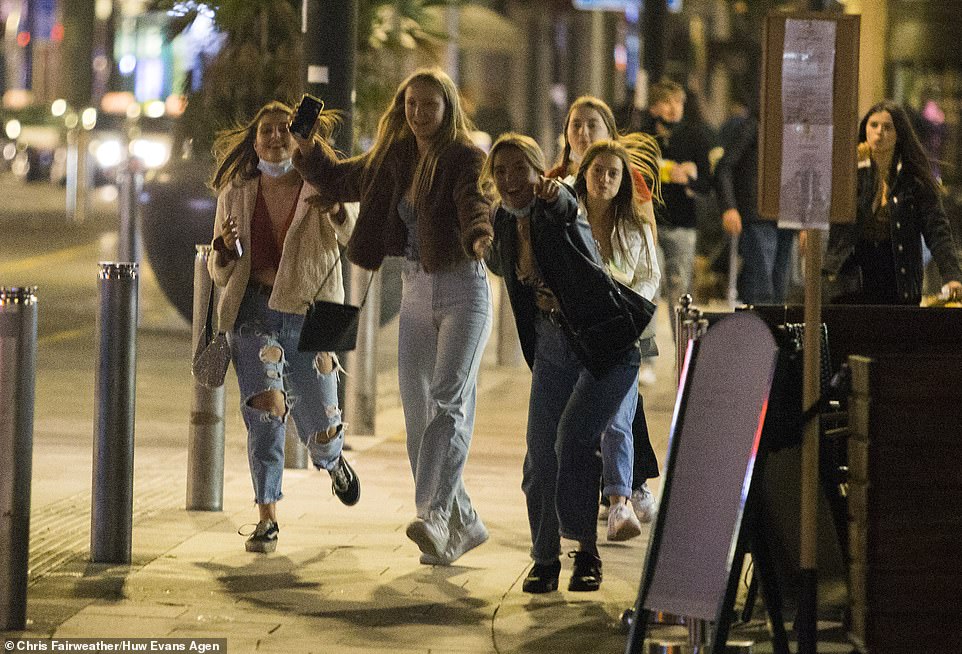 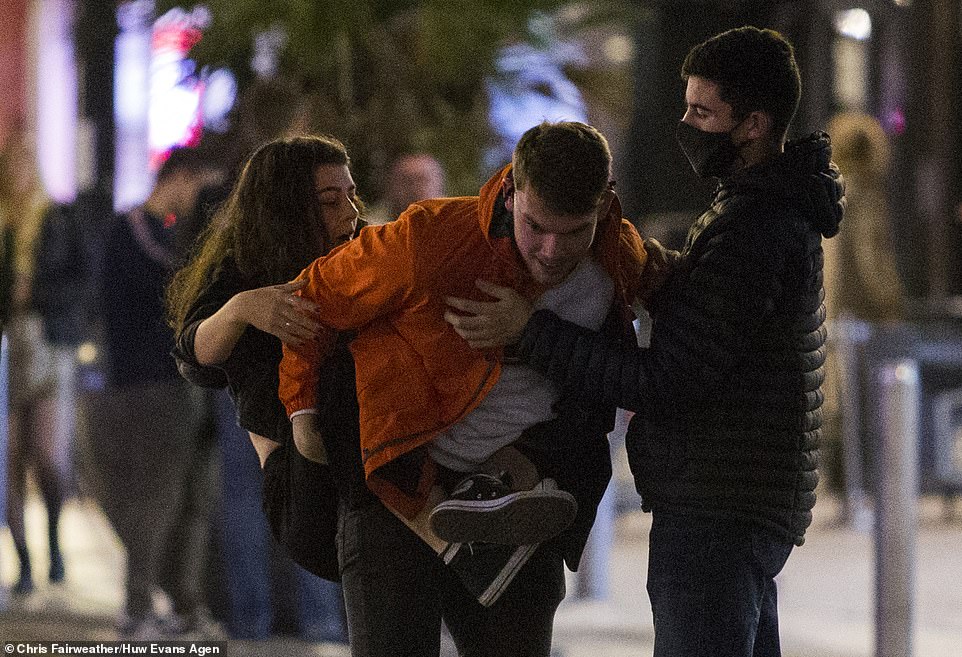 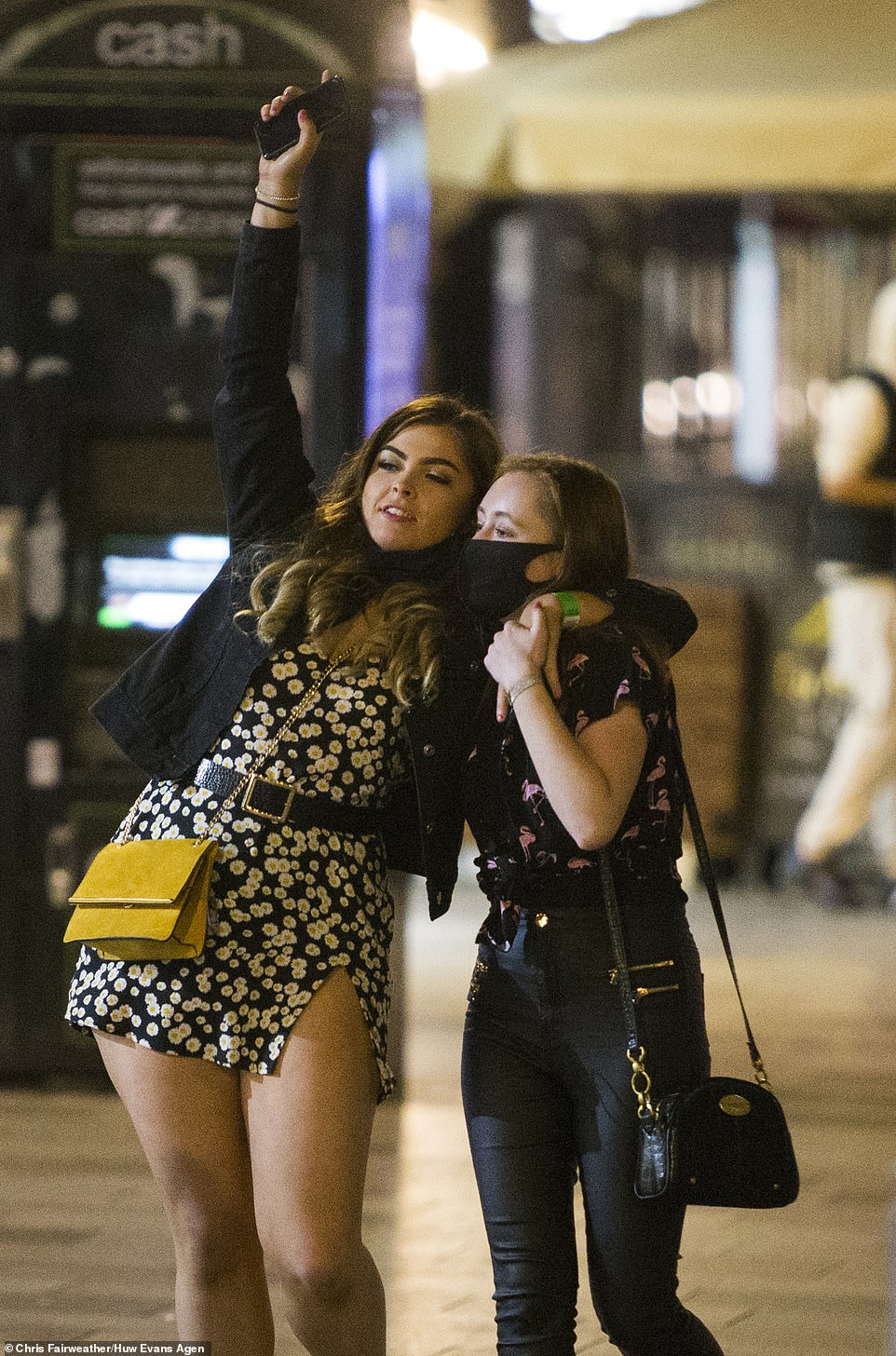 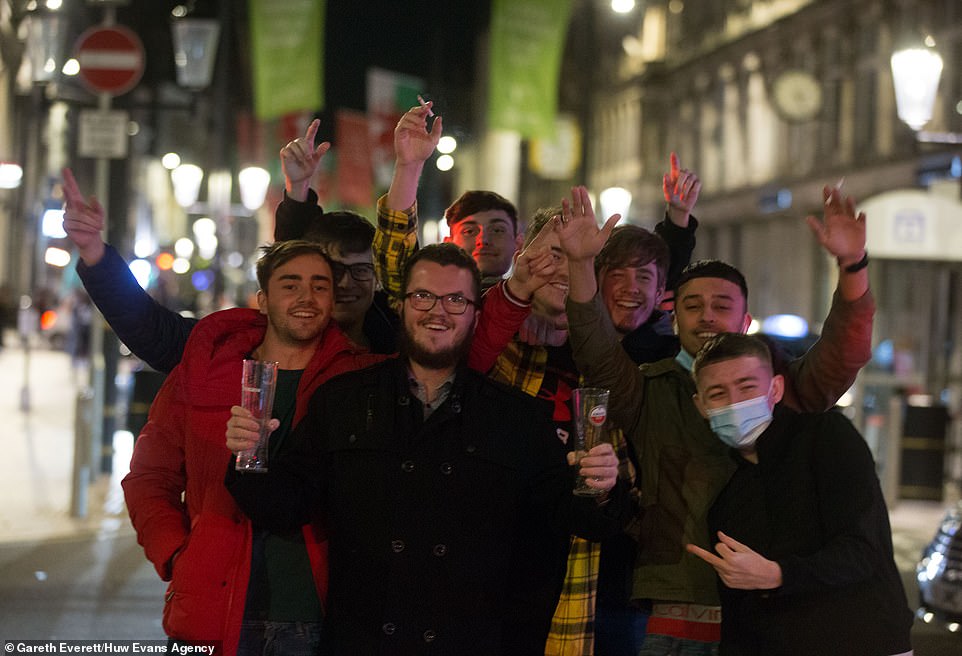 Revellers holding beer glasses pose on the streets of Cardiff, but only one of the group was correctly wearing a face covering 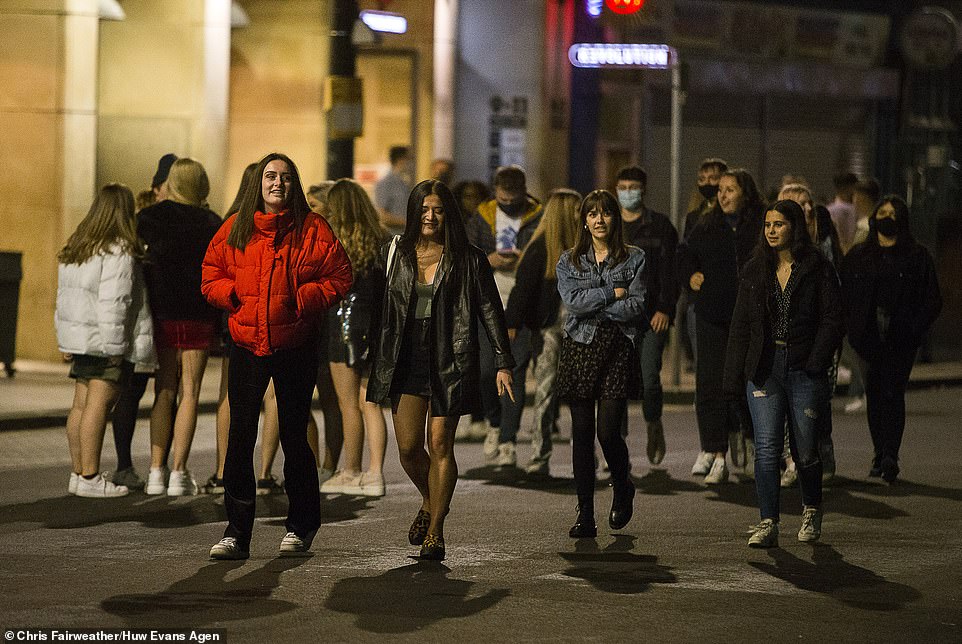 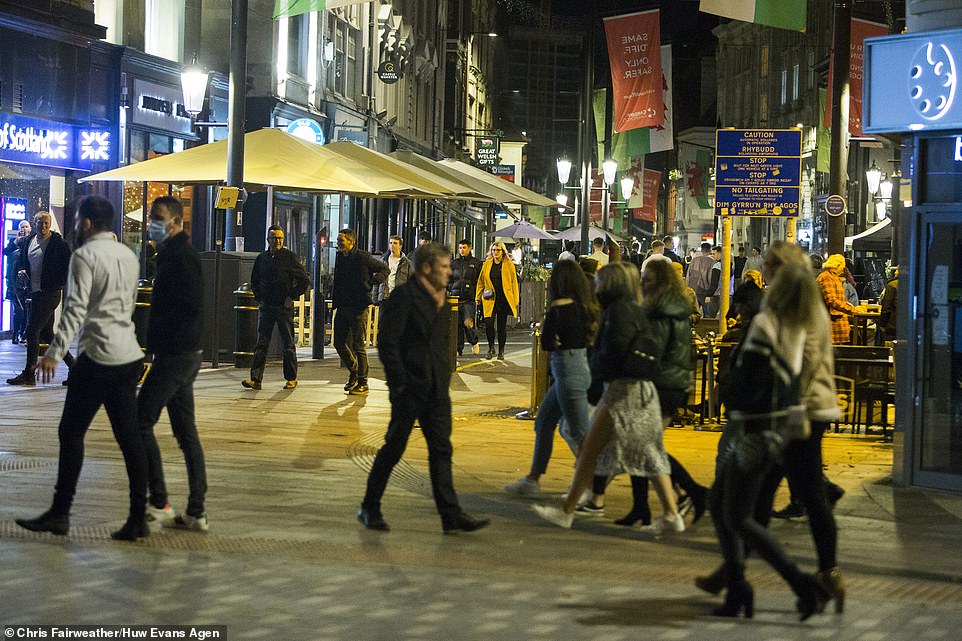 Pubs, restaurants and all non-essential shops are being ordered to close until November 9 as a result of the new lockdown 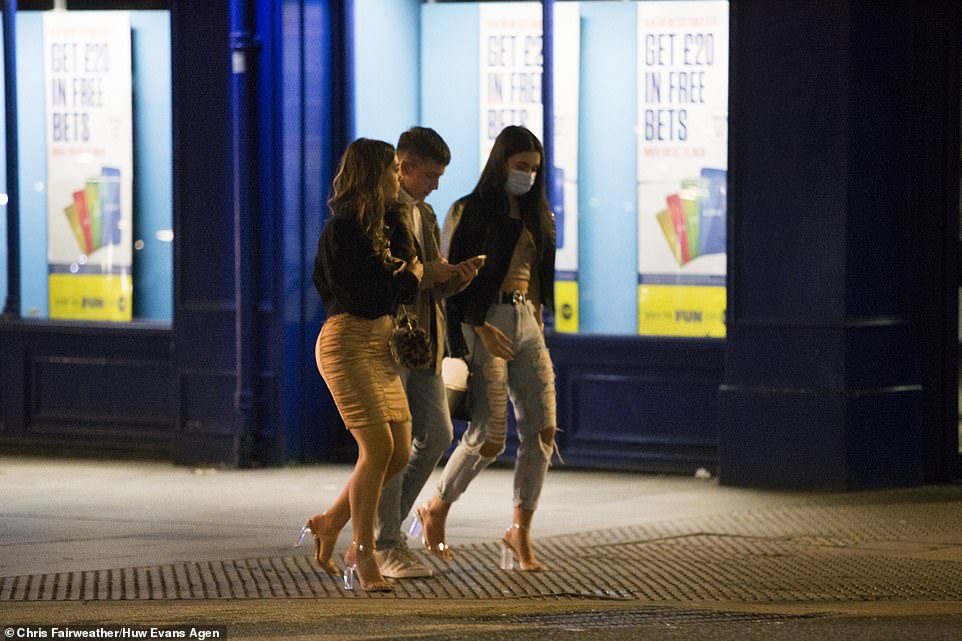 Some revellers abided by the rules and wore face coverings but, for the most part, social distancing was nowhere to be seen 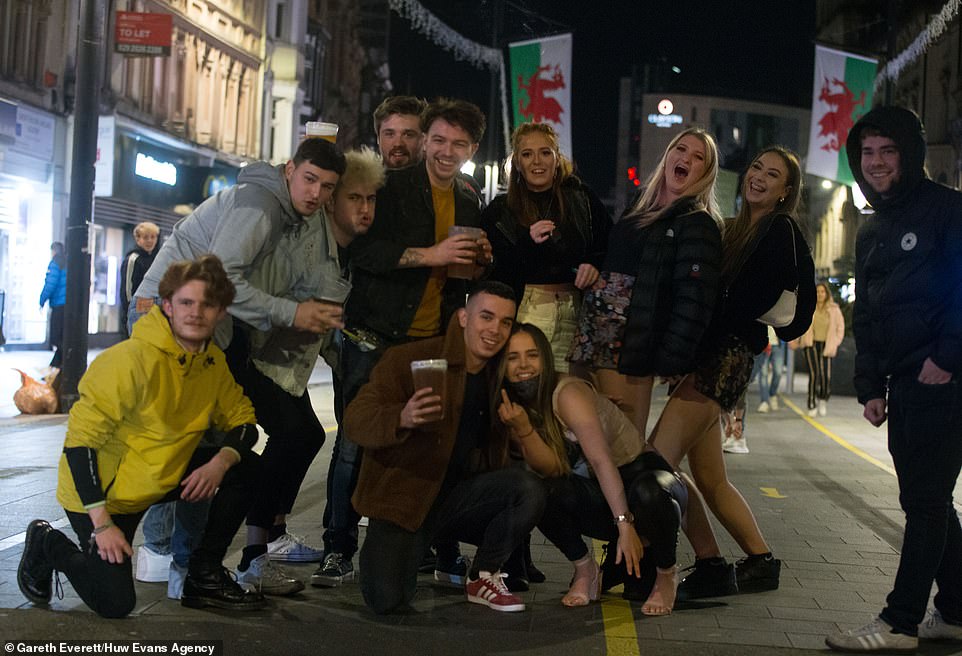 A group of youngsters, some holding pints, pose as they enjoy their last night on the town for more than two weeks 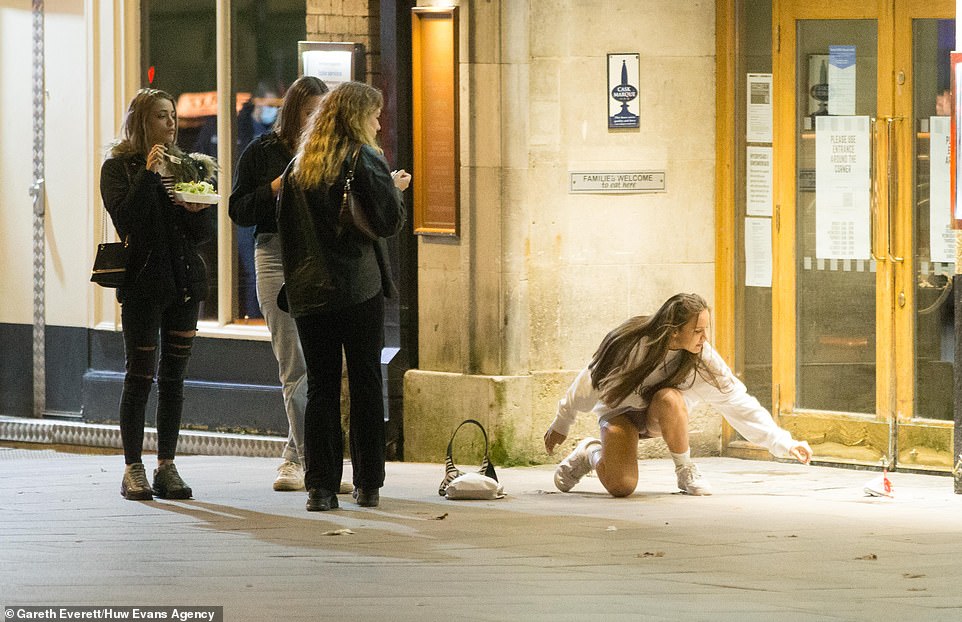 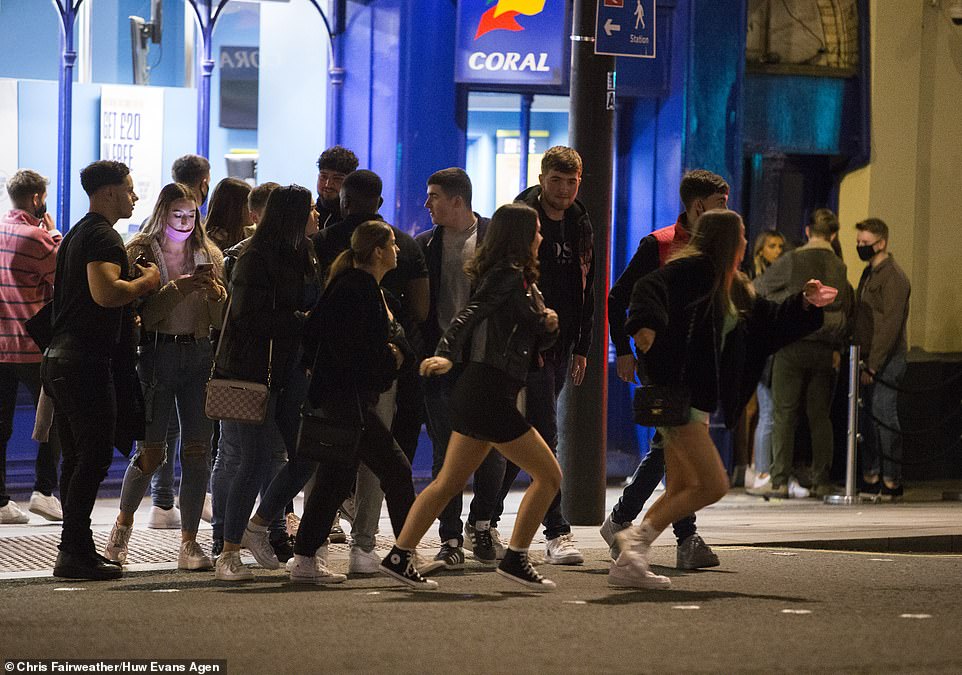 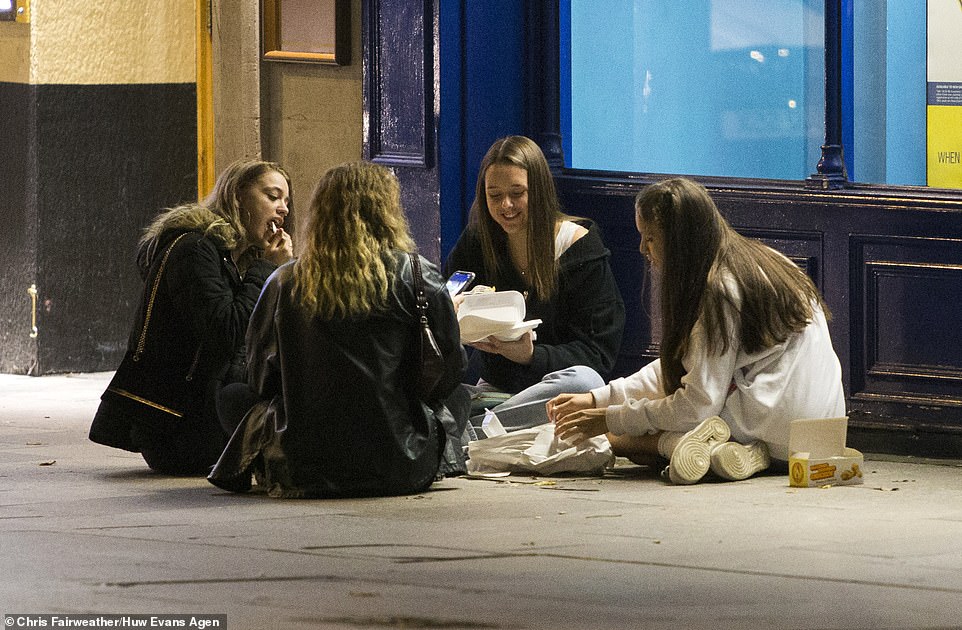 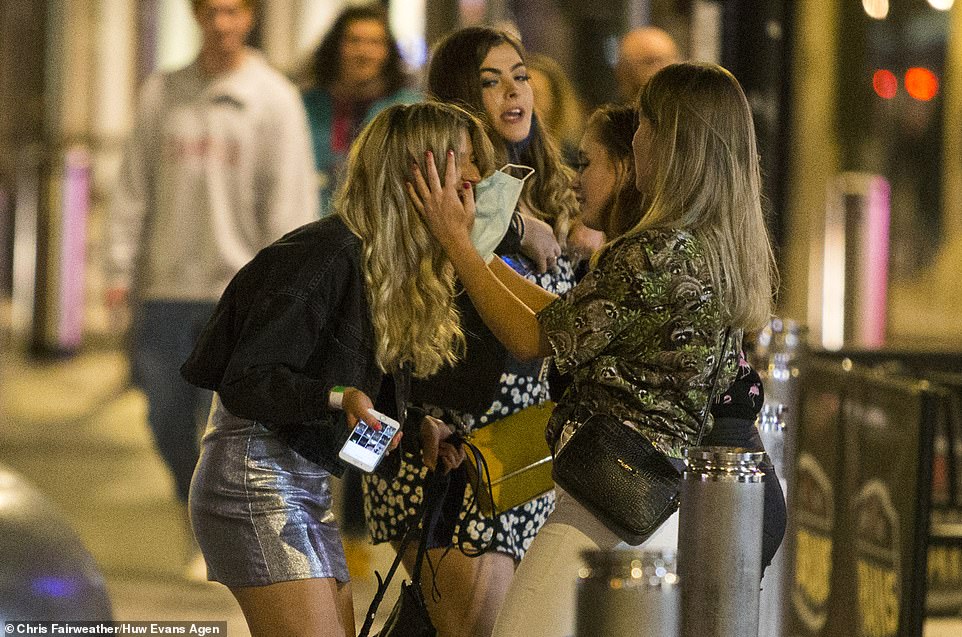 The Welsh lockdown is significantly more severe than England’s three-tier system, where even in the strictest areas, some social meetings are allowed outdoors and pubs can stay open providing they offer customers a ‘substantial meal’.

In Scotland, First Minister Nicola Sturgeon also wants to take a harsher approach than the PM, with more levels of curbs to tackle the pandemic, though she played down claims from a top adviser that families should prepare to see loved ones over Zoom at Christmas due to the ongoing crisis.

Welsh First Minister Mark Drakeford said it will be ‘made clear’ to supermarkets that only certain parts of their business will be allowed to open in order to sell essentials.

Retailers have been given mere hours to put together plans for the lockdown, which will run until November 9, as shopkeepers argue the rules do not make sense as customers will already be in their stores to buy the ‘essential’ items.

The move has sparked anger among opposition figures, with Welsh Conservative Andrew RT Davies tweeting: ‘The power is going to their heads’.

Mr Drakeford made the announcement at a Senedd committee in response to a question from Conservative MS Russell George who said it was ‘unfair’ to force independent clothing and hardware retailers to close while similar goods were on sale in major supermarkets.

‘In the first set of restrictions people were reasonably understanding of the fact that supermarkets didn’t close all the things that they may have needed to,’ Mr Drakeford said.

‘I don’t think that people will be as understanding this time and we will be making it clear to supermarkets that they are only able to open those parts of their business that provide essential goods to people and that will not include some of the things that Russell George mentioned which other people are prevented from selling.

‘So, we will make sure there is a more level playing field in those next two weeks.’

From Friday all leisure and non-essential retail will be closed and this includes clothes shops, furniture shops and car dealerships. A complete list is yet to be published.

Shops allowed to remain open include supermarkets and other food retailers, pharmacies, banks and post offices.

Under the law, firms conducting a business that provides a mixed set of services will be allowed to open if they cease conducting the service that must close.

Mr George said: ‘It is deeply concerning that, given we are days away from the lockdown, we are still awaiting the publication of a full list of the types of businesses required to close, as well as guidance on business closures.

‘At a time of considerable uncertainty, it is totally unacceptable – whether intentionally or not – to create even more concern and anxiety, which is, sadly, what this Government is succeeding at.

‘The people and businesses of Wales deserve better than being left in the dark. For the sake of people’s jobs and livelihoods, I urge the Welsh Labour-led Government to heed our calls and publish a list, without delay.’ 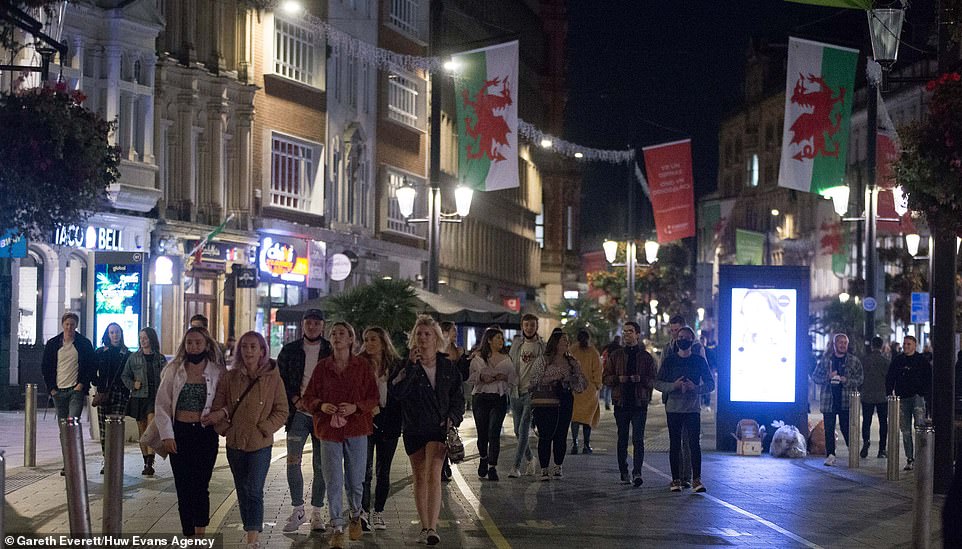 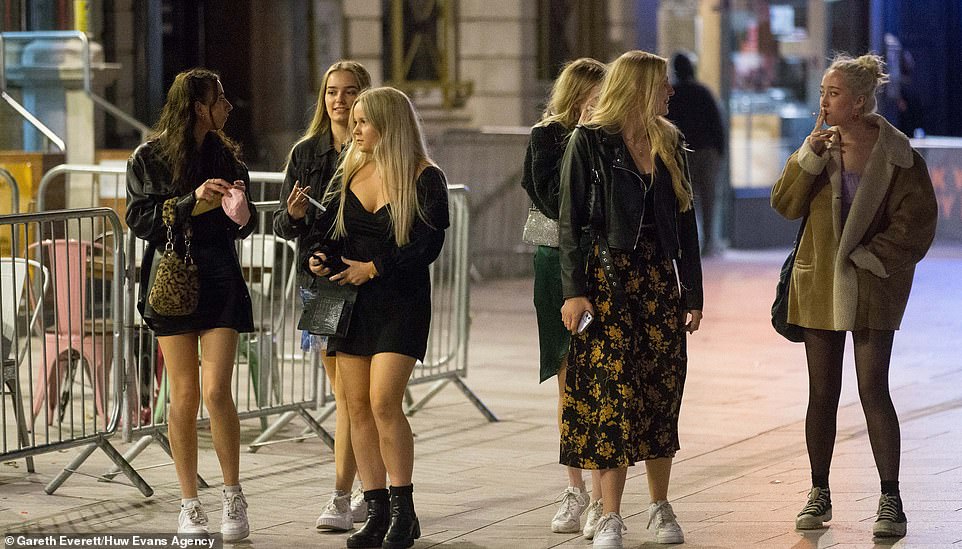 Pubs and bars will close tomorrow as a result of the Welsh government’s ‘firebreak’ lockdown, so many made sure they were out to enjoy one last night out 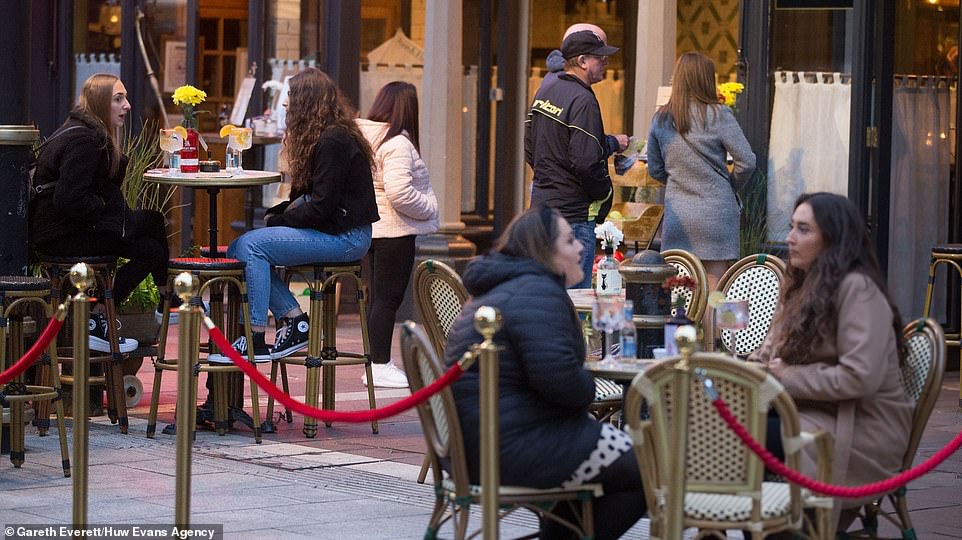 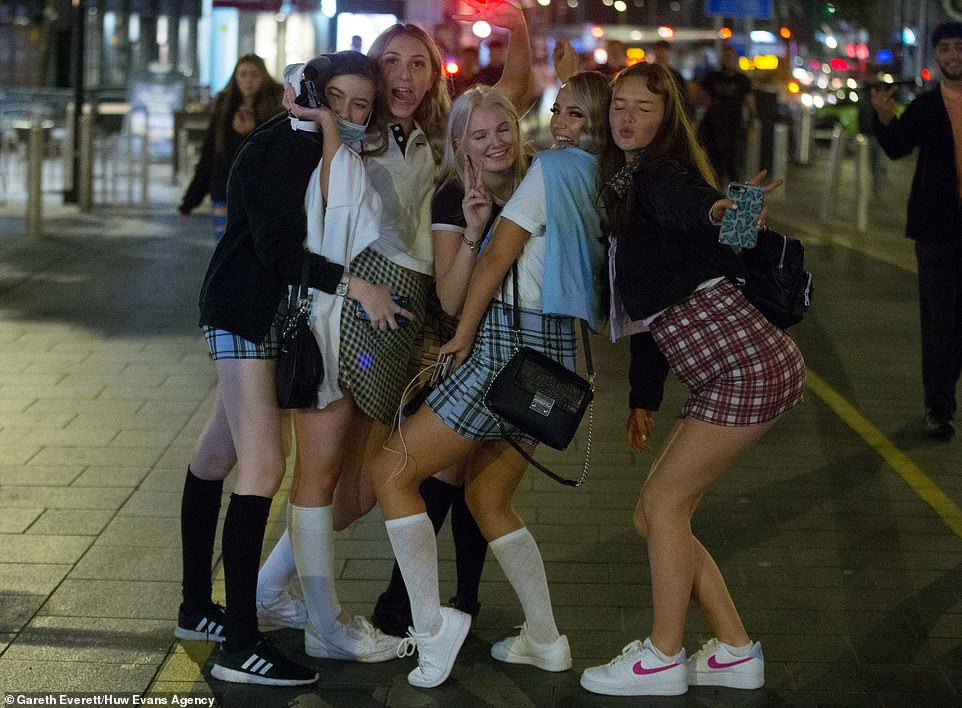 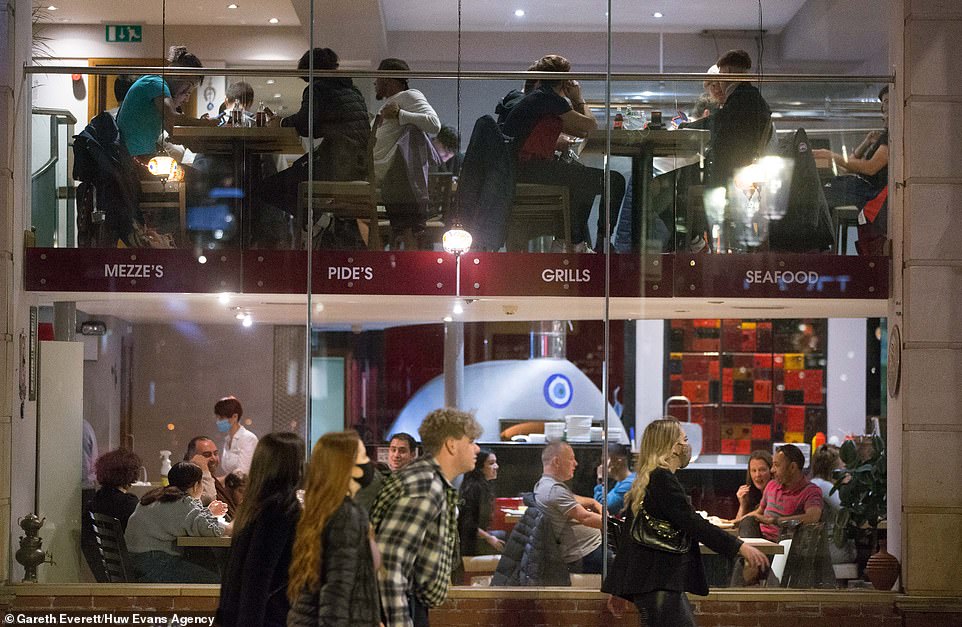 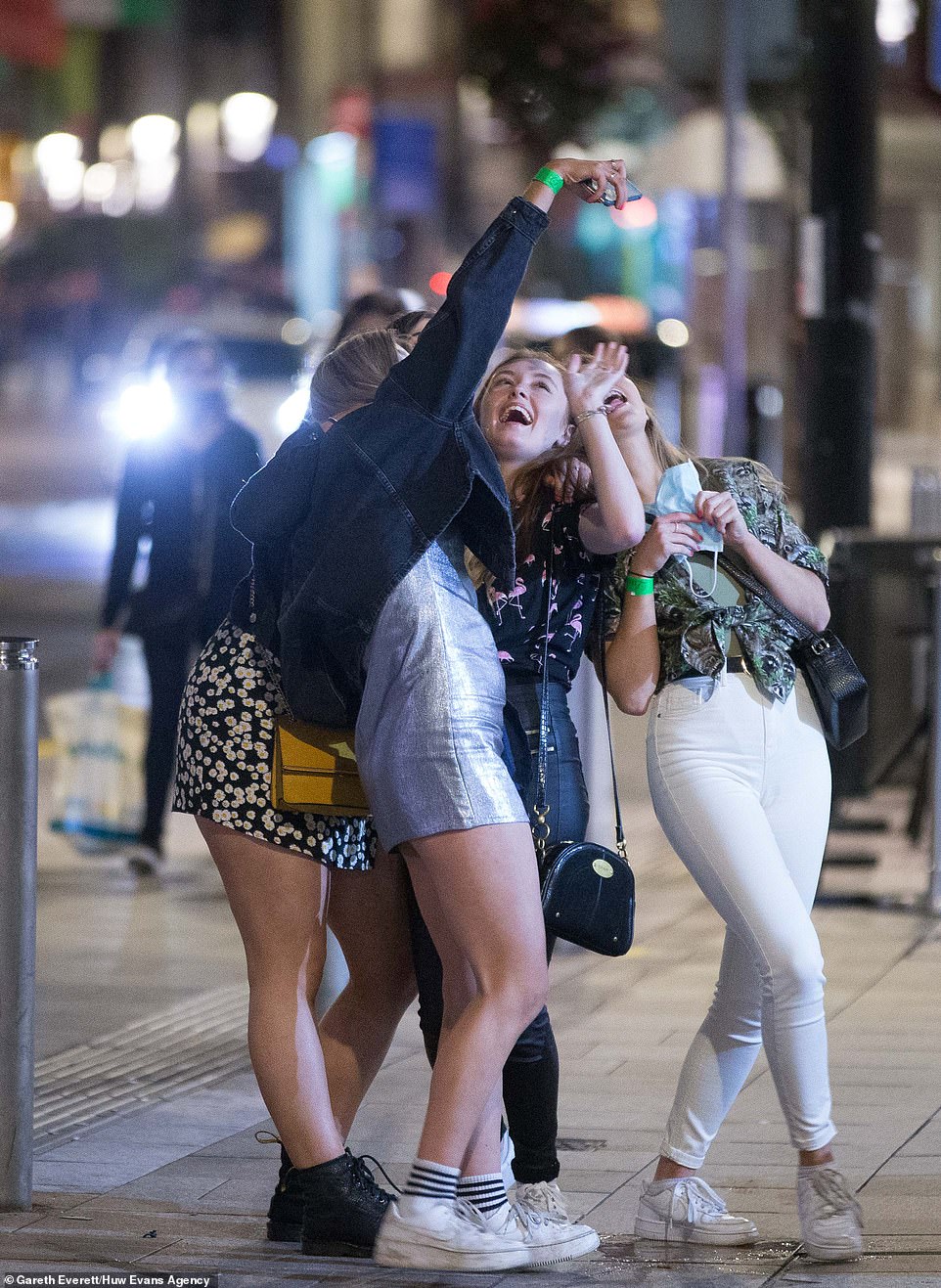 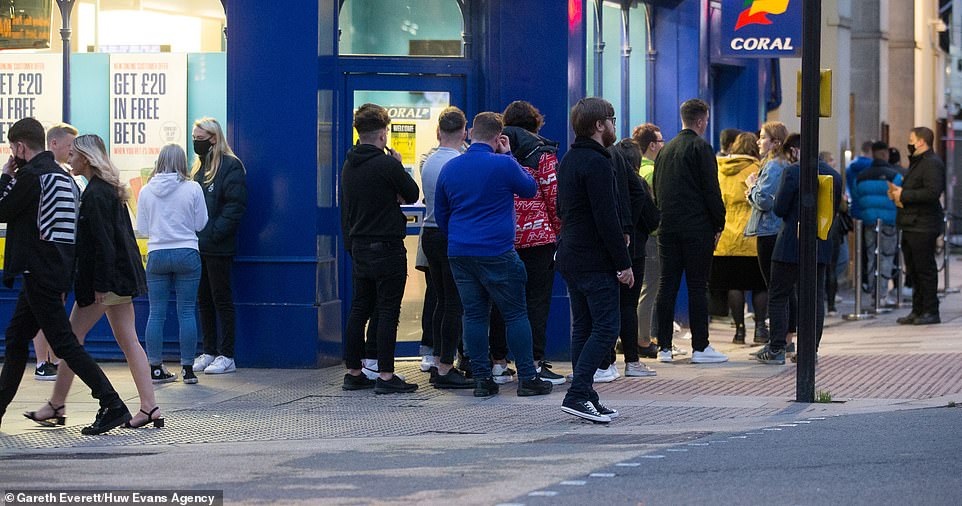 Crowds of people took to the streets in the Welsh capital, just hours before pubs, restaurants and non essential businesses are being ordered to close 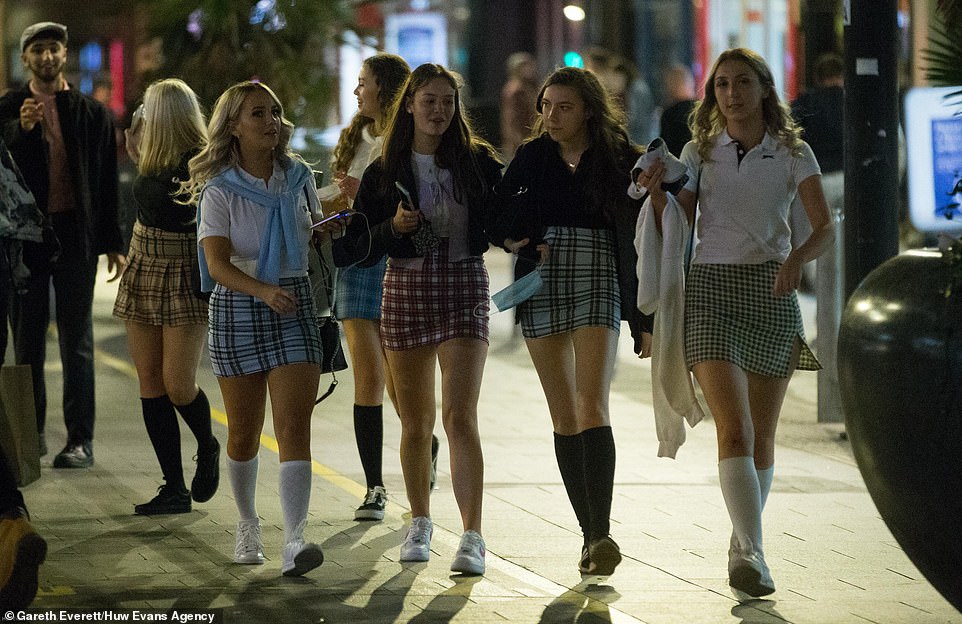 With a host of new restrictions and pub closures on the horizon, these youngsters were keen to take advantage of one last night on the town in Cardiff 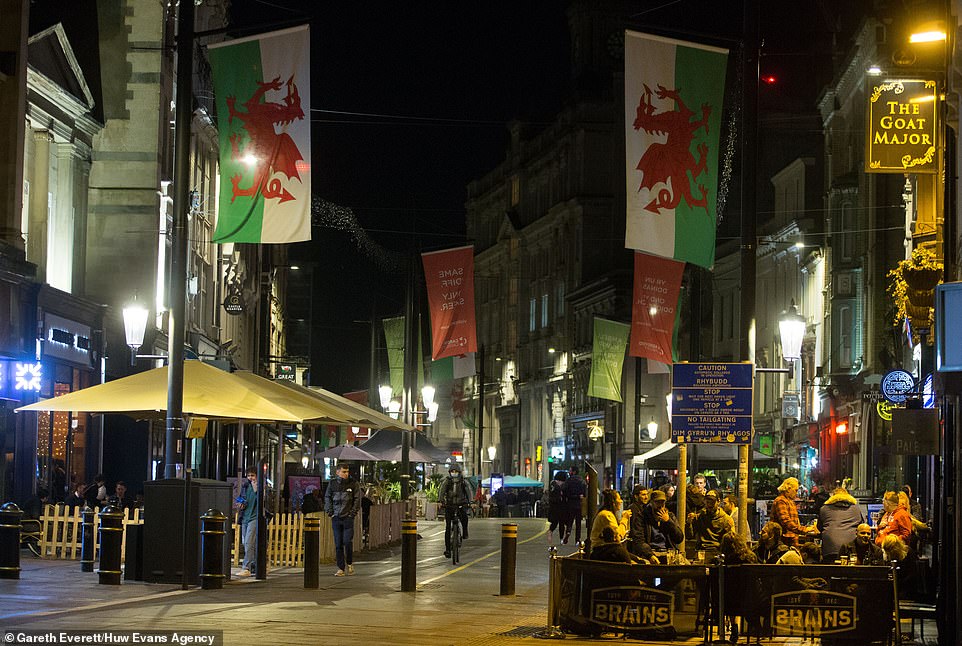 Drinkers packed into pubs on what is their last night out in the Welsh capital for more than two weeks, due to new rules

Andrew RT Davies, the Conservative shadow health minister, tweeted: ‘The power is going to their heads.’

He later added: ‘Is a flagon of Strongbow deemed essential? What about some much-needed underpants if you’re caught short?

‘I do hope there is some published guidance on what the Labour commissars deem as essential.’

Sue Davies, from consumer group Which?, said the announcement would cause ‘confusion’, particularly among the vulnerable.

‘Our own research showed that almost half of those who described themselves as situationally vulnerable in Wales during the previous lockdown had difficulty accessing the food and groceries they needed,’ she said.

‘The Welsh Government must act now to clarify the situation around what retailers can and cannot sell, and must urgently identify those most in need to give them the support to ensure that no-one who is at risk struggles to access the food and other basics they need.’

The First Minister said he would keep the principality closed down for as short a time as possible, but insisted it was necessary to act as a breaker to a ‘rising tide’ of cases – despite Wales having a lower rate of infections than England.

The decision to impose a ‘short and deep’ lockdown until November 9, which echoes national demands made by Sir Keir Starmer and wipes out Halloween and Bonfire Night, sparked a furious political backlash.

Welsh Tories said it was dooming the country to an endless cycle of two-week lockdowns while Conservative MPs in Westminster said it was a ‘blunt instrument’ and ‘closing down the whole of Wales is disproportionate to the level of risk in some parts of the country’.

Sara Jones, head of the Welsh Retail Consortium, said: ‘Compelling retailers to stop selling certain items, without them being told clearly what is and what isn’t permitted to be sold, is ill-conceived and short-sighted.’

And James Lowman, chief of the Association of Convenience Stores added: ‘Retailers must not be forced to stop making products available to customers just because ministers don’t think they’re essential.’

A Welsh Government spokesperson said: ‘The fire-break is designed to reduce all physical contact between households to an absolute minimum in order to slow the spread of coronavirus and save lives.

‘We have a small window in which to take this action and there are no easy choices.

‘However, we fully recognise the impact the fire-break will have on businesses and are making a further £300 million available to support them through this difficult period.’