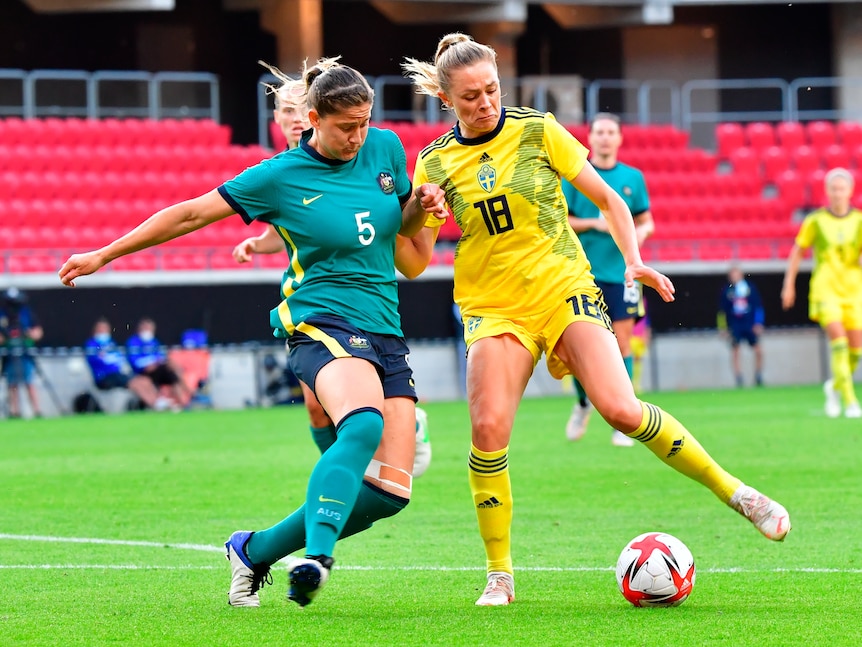 Australia’s women’s team turned in a much-improved performance ahead of the fast-looming Olympic Games to earn a scoreless draw against world number five Sweden.

The Matildas had lost three matches to open the tenure of new coach Tony Gustavsson but they looked far more assured against the Rio 2016 silver medallists in Kalmar on Wednesday morning.

There were limited clear-cut goalscoring chances at either end of the pitch with Sam Kerr’s strike against the crossbar the closest to a goal for either side.

The result follows last Friday’s 3-2 loss to Denmark, and heavy recent defeats against Germany (5-2) and the Netherlands (5-0).

Australia had only recorded a single win in 11 previous match-ups against the Swedes, a side they have been drawn against at next month’s Women’s Olympic Football Tournament.

Young midfield prospect Kyra Cooney-Cross was given a first starting debut while regular starter Caitlin Foord made a rare start on the bench.

Also notable was the presence of regular left fullback Steph Catley in the centre of defence as Tony Gustavsson continued to try and shore up a defence that had conceded 13 goals in just three matches.

There was experimentation too for Sweden, with the European heavyweights making seven changes to the side which defeated Norway 1-0 last Friday, extending their unbeaten run to 11 matches.

Kyah Simon fired the first shot in anger for Australia on the half-hour mark but failed to fully test Swedish goalkeeper Jennifer Falk.

At the other end, Johanna Kaneryd could easily have put the home side in front just before the break though the forward sprayed her shot just wide after neatly creating space.

Kerr enjoyed little time on the ball but came closest to breaking the deadlock when her fierce shot rattled the crossbar midway through the second half.

The Australian captain however was withdrawn with a quarter of an hour remaining, and Gustavsson again displayed his flexibility by pushing fullback Ellie Carpenter into the number nine role.

Aside from Sweden, Australia will also face USA and New Zealand at the Tokyo Olympics, with their opener against the latter on July 21.