Matt Hancock gets his Covid jab… from Professor Jonathan Van Tam: Health Secretary, 42, reveals he was ‘in and out in eight minutes’

The Health Secretary posed for a picture while being jabbed by England’s deputy chief medical officer at the Science Museum in London.

He described having the jab at the museum as a ‘privilege’ and thanked Professor Van-Tam for administering it.

Mr Hancock — who said he was ‘very excited’ to get inoculated — tweeted that he was ‘in and out in eight minutes’ and that it ‘didn’t hurt at all’. He called on people to keep coming forward for their jab when invited.

England’s vaccine rollout was opened up to 42-year-olds — including Mr Hancock — on Tuesday.

The UK has now dished out 33.9million first jabs and 13.6million adults are now fully vaccinated — more than a quarter of the population.

But the number of first doses being administered each day has fallen from a peak of 750,000 to just 115,000 yesterday, with the NHS focused on dishing out top ups. 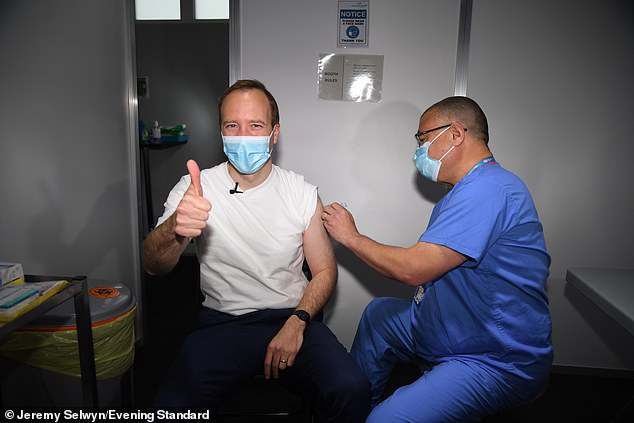 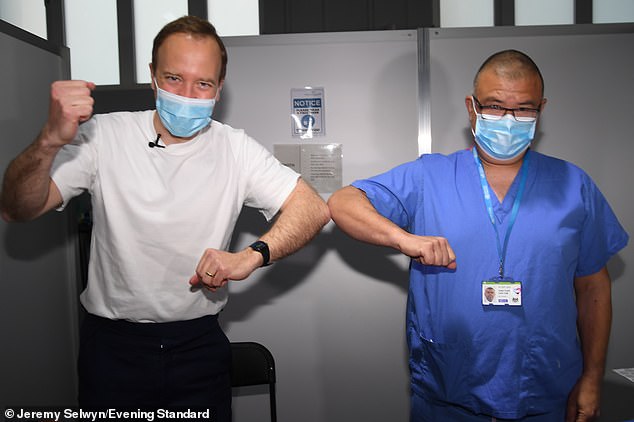 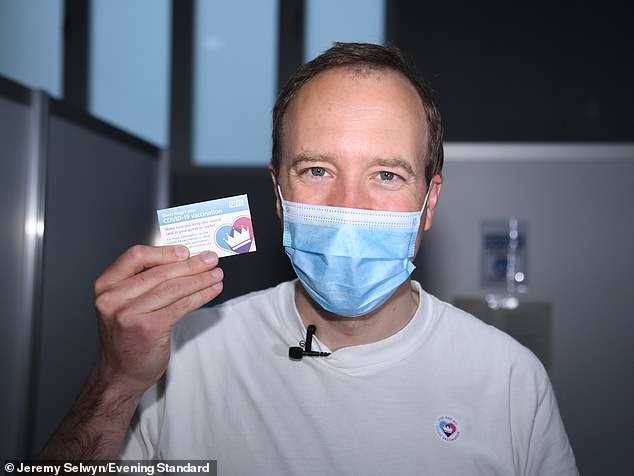 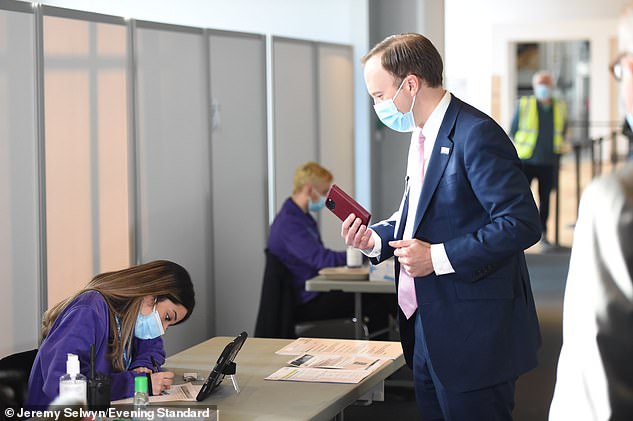 The Health Secretary queues up for his jab in the Science Museum. Britain’s roll-out was extended to 42-year-olds on Tuesday 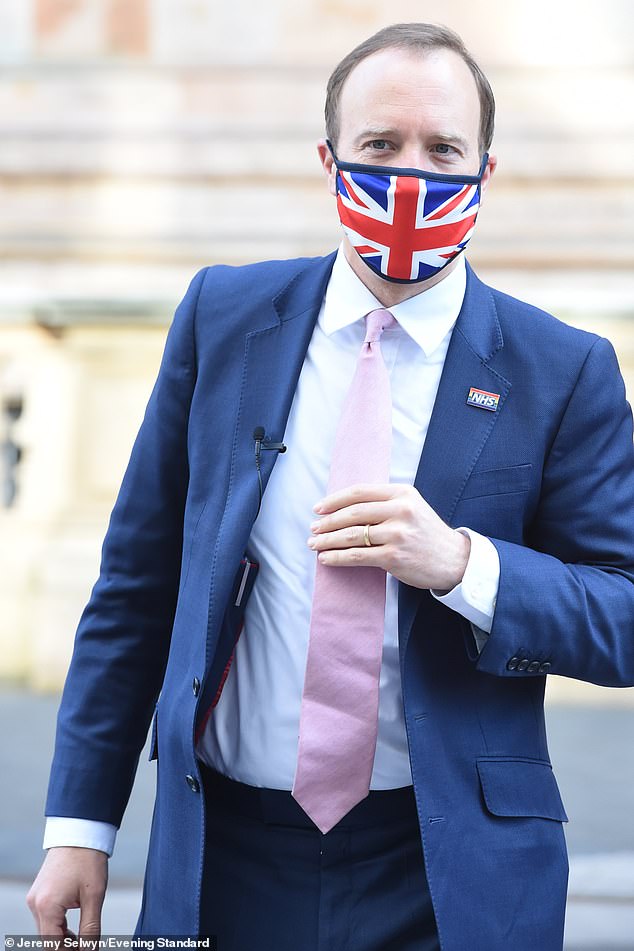 Mr Hancock, wearing a Union Jack face mask, arrives at the Science Museum in London for his first vaccine this morning

The Health Secretary said: ‘It was a privilege to get my first jab within the historic walls of the Science Museum in London, where the team are documenting the national pandemic response and preserving items like the first Covid vaccine vial to be used anywhere in the world.

‘Learning from science has been central this last year more than ever, so it felt fitting to be at the museum.

‘Over 47million doses have now been administered across the country thanks not only to hundreds of hospitals, GP clinics and pharmacies, but to incredible sites like this that have volunteered their unused spaces.

Nearly 70% of adults in England now have coronavirus antibodies

About seven in 10 adults in England have coronavirus antibodies, according to official data that suggests the majority of the population now has immunity against the disease.

A major Office for National Statistics (ONS) testing survey today revealed 68.3 per cent of people had the virus-fighting proteins in the week ending April 11, up from 53.1 per cent a fortnight prior.

The results highlight the success of the huge vaccination drive, which has seen almost 34million Britons — more than half the entire population — receive at least one dose. Some 13.2m of them have been given both injections.

Antibody levels are likely to be even higher now because millions more have been jabbed since the blood tests were conducted more than a fortnight ago, and it takes about two weeks for immunity to kick in.

Their presence in the blood generally means someone has some at least some protection against the disease and won’t fall ill. But they are not the only part of the immune system.

‘The rollout is continues at pace and we are on track to reach our target of offering all adults a first dose of the vaccine by the end of July.

‘I was very excited when my call came, and I’d urge everyone to take up the offer when it comes, and become part of history in the UK’s biggest ever vaccination programme.’

He posed for pictures with Professor Van Tam on Twitter and said the jab ‘didn’t hurt at all’.

Mr Hancock wrote: ‘Brilliant! Got the jab. In and out in eight minutes. Didn’t hurt at all.

‘Massive thanks to JVT and the Science Museum team. When you get the call, get the jab!’

It comes after the Health Secretary last night revealed Britain has bought another 60million doses of Pfizer‘s Covid vaccine as part of plans to launch a booster jab rollout this autumn.

Ministers hope the extra supplies — which will take No10’s total order to 100million — will start to be delivered from September through to early 2022 so everyone in the country can be offered a third vaccine.

Some of the supplies may also be used for second doses for under-30s vaccinated in June and July, who would expect their boosters in September and October. Young adults are not likely to get the AstraZeneca vaccine because of concerns about blood clots.

The autumn vaccine rollout will offer everyone who has been vaccinated a third jab, either of the same type or potentially a different vaccine if studies prove this works, to boost their immunity for the long-term, officials said.

The extra jabs will be the same as the Pfizer ones given out at the moment, not specific ones targeted at the South Africa or Brazil variants, although the company is working on these.

Pfizer, which manufactures the vaccine in factories across Europe, has already supplied the UK with at least 16million doses since its first delivery at the start of December. All 40million doses of the initial order are due by the end of 2021.

Mr Hancock said at a Downing Street briefing today that ‘evidence is stacking up that the vaccine protects you, it protects your loved ones, and it’s the way out of this pandemic’.