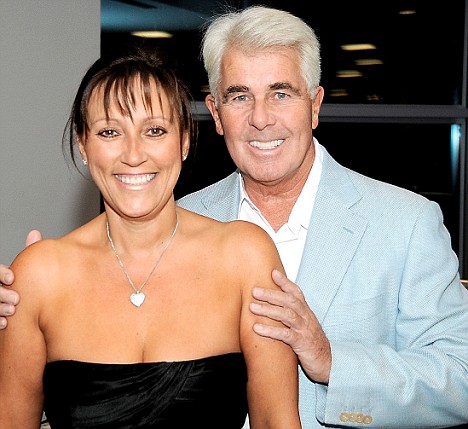 Max Clifford believes he is one of the luckiest men on Earth. Incredibly successful at a job he loves, he is determined to enjoy every second he’s alive.

Just 12 months ago he was diagnosed with prostate cancer and faced months of intense therapy and an uncertain future.

Now he has learned that the prostate cancer is in remission; his latest blood test shows that the level of prostate specific antigen (PSA) – a protein manufactured in the prostate which may be increased if there is cancer – is virtually rock bottom.

Secret: Max with fiancée Jo Westwood, one of only two people he told about his cancer

Max’s prognosis is excellent. Considering prostate cancer is the most common cancer in men, killing 10,000 every year, and accounting for 12 per cent of male deaths from cancer in the UK, this is exceptionally good news.

Max is convinced he owes his happy outcome to the fact he was very ‘prostate aware’ and had his PSA levels tested regularly.

Had he relied on symptoms alone – as most men do – the disease would almost certainly not have been picked up in time. Max has been told he would probably have died within two years.

Fully aware of the statistics, Max was so anxious not to worry anyone that he kept his diagnosis secret for six months – only revealing the truth when his treatment was over.

‘There’s been a big black cloud hanging over me since I was diagnosed,’ says Max, 65, who lives in Weybridge, Surrey, with his fiancée Jo Westwood. ‘I tried not to dwell on it but I didn’t know whether the treatment was working.’

The treatment itself finished in April but Max then had to wait three months before his PSA levels could be tested because radiotherapy would give false readings.

‘The results were good but I couldn’t relax because I wanted to be sure they’d stay low. But I was tested in October and have learnt they are now at a level of 2.8 – the lowest they’ve been since I started being tested. I’m so relieved.’

He was warned of the dangers of prostate cancer five years ago at a private health check. ‘I didn’t have any symptoms. That’s one of the worrying things about prostate cancer – it can be a silent killer,’ he says. ‘But I’d just reached 60 and, like thousands of men that age, had an enlarged prostate.’

Enlarged prostate is a benign condition, an overgrowth of the gland which doesn’t increase a man’s risk of prostate cancer.

However, Max’s private doctor suggested he had a PSA test every four months just to be on the safe side.

The tests were normal until three years ago, when his PSA levels (which should be below ten in a healthy man) soared to 11.

Understandably, Max was worried. But further tests showed there was no cause for concern.

‘I wasn’t in shock – I’ve seen too many people die of cancer, including my wife’

Some experts, including many doctors in America, dismiss the value of a PSA test because it can alarm men unnecessarily. But Max continued with regular testing –
and he believes this saved his life.

In October 2007, his PSA levels, having dropped to eight, virtually doubled to 15. He still had no symptoms, but a biopsy picked up early signs of malignant cancer.

‘I was having dinner with Jo and friends when my GP rang,’ Max recalls. ‘The doctor was optimistic as they’d caught it early but cancer is a word you never want to hear.

‘But I wasn’t in shock – I’ve seen too many people die of cancer, including my wife.’
Liz, Max’s wife of 37 years, was diagnosed with lung cancer in 2002, dying eight months later.

‘Liz played a lot of badminton so when she had pains in her back we thought it was that,’ he says. ‘She had physio and massages but the problem didn’t clear up, so after a few months she went for tests.

Painful past: Max’s wife, Liz, was diagnosed with lung cancer in 2002 and died eight months later

‘The results showed that she had cancer. In fact, the cancer in her bones was secondary. She was suffering from advanced lung cancer.

‘Liz was transferred to the Royal Marsden Hospital in London. The consultant took me to one side and explained that Liz had, at most, seven months to live. The shock was terrible.

‘I knew that she wouldn’t want to know. When her mother was dying, Liz decided she shouldn’t be told because it would be too traumatic.

I knew Liz would want the same. For her sake, I kept it secret. Liz knew her condition was serious but never knew it was terminal. She had treatment – radiotherapy and chemotherapy – and I reassured her things were going well.’

Max confided in only one person – their daughter Louise, 37 – after she’d asked to be told the truth.

After consulting experts around the world, Max was convinced that Liz was getting the best possible treatment at the Marsden. She died on April 8, 2003. She was just 57 and, despite being in great pain, stayed positive until the end.

Drawing on his experience with Liz, Max decided to keep his own illness a secret – trying to carry on as normal was, he decided, the best way for him to cope.

‘I was worried about surgery as there are too many risks – such as being left impotent. It’s every man’s big fear‘

‘When Liz died, I had people phoning me in floods of tears and found myself trying to comfort them, which made it worse,’ he says. ‘I didn’t want that. I didn’t want everyone wondering what to say.’

Max told only two people: Louise and Jo, his girlfriend of three years. He and Jo, 45, a former nurse, met at the Chase children’s hospice, Guildford, Surrey, where Jo is a volunteer and Max a fundraiser.

After the initial diagnosis, Max faced the stress of a six-week wait to discover whether the cancer was slow-growing or aggressive. ‘It all happened over Christmas, which was very tough,’ he says.

‘We had friends over, and we were all chatting and laughing and I would be thinking to myself: “Will I be here next year?”

‘It was a huge relief when my doctor rang in January to say that the cancer had been contained.’

At London’s private Cromwell Hospital, Dr Nick Plowman, a prostate cancer specialist, explained that Max’s cancer was the intermediate type – not slow-developing but not aggressive either.

But without treatment, Max probably had less than two years to live. He was given the option of surgery to remove the prostate, brachytherapy – a form of radiotherapy where radioactive seeds are implanted in the prostate – or conventional radiotherapy.

Max with wife, Liz, and daughter Louise, now 37. Max confided in Louise after she asked to be told the truth

‘I was worried about surgery as there are too many risks – such as being left impotent,’ recalls Max. ‘I have an extremely good sex life and I didn’t want to risk losing it. It’s every man’s big fear.’

He was also less keen on the radioactive seeds as they take time to kill the cancer cells. So Max had a course of 37 radiotherapy sessions over nine weeks, starting in February.

‘I expected it to be more debilitating than it was,’ he says. ‘I still managed to swim five times a week and play tennis. I felt tired – but that could have been down to ageing. I had nerve damage but only very minimal. I was extremely lucky.’

Determined that no one should guess his secret, Max continued his usual work routine.

When he finally did break the news, Max was able to do so exactly as he’d hoped. In mid-April, with the treatment behind him, he rang everyone to say: ‘I’ve had prostate cancer. I’ve had treatment and the results appear to be successful.’

Not surprisingly, people were stunned. Some were even miffed.

‘Simon Cowell was taken aback,’ Max chuckles. ‘He said: “Why on earth did you keep it to yourself? I thought we were close.” I explained to him, as I did to everyone, that it was simply my way of coping.’

Now Max – famous for guarding the secrets of the rich and famous – is speaking candidly about his cancer in support of the Prostate Cancer Charity’s drive, Transforming the Future for Prostate Cancer, being launched this week to radically improve the quality of diagnosis and treatment.

He stresses the importance of being aware of the symptoms and not being embarrassed to talk about them. Max also believes in the need for PSA tests.

‘I am convinced that having a PSA test saved my life,’ he says. ‘It’s not perfect – as I know from my own experience when I had a false alarm – but it’s the best we have, so it’s mad not to take advantage of it. It’s a simple blood test.

‘People ask: “Aren’t you embarrassed?” But what is there to be embarrassed about?
‘Men are dying of embarrassment because they won’t talk about their health. Caught early prostate cancer is very curable.’

Rupert Grint says his role in ‘Harry Potter’ was ‘quite suffocating’ 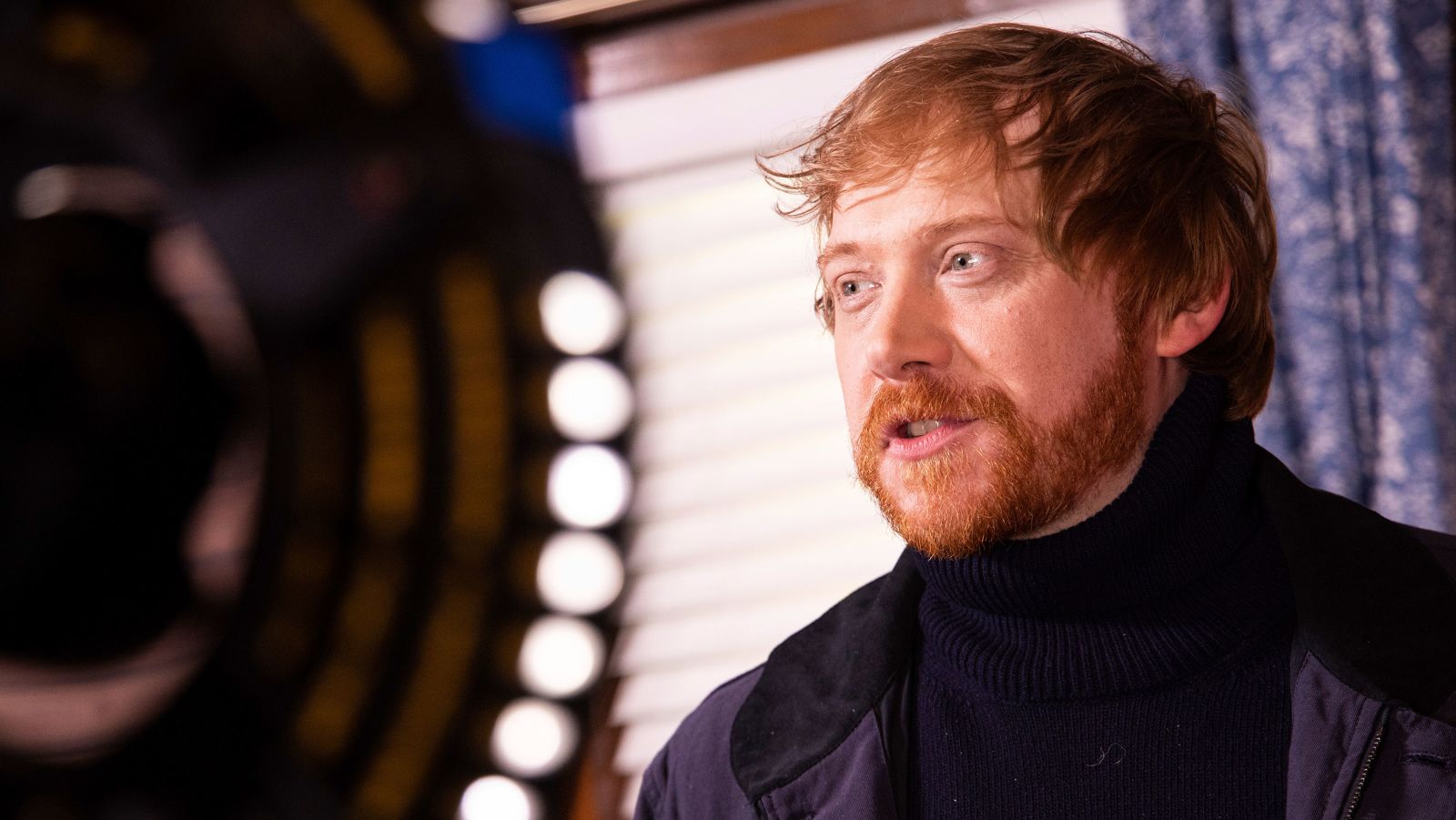