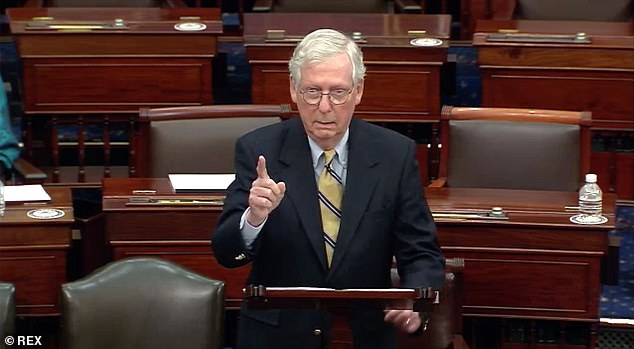 Mitch McConnell has said he is open to opposing any ‘unelectable’ candidates in 2022, even if they are strongly backed by Donald Trump, as he wrestles with how to handle a deeply-divided party following Trump’s impeachment hearing.

McConnell voted on Saturday to acquit the former president, but then publicly attacked him, accusing him of a ‘disgraceful dereliction of duty’ in his most critical remarks ever uttered.

His tightrope walk between defending and demonizing the former president impressed few.

McConnell’s home newspaper, The Lexington Herald-Leader, accused him on Sunday of having ‘contorted himself into a strange pretzel-shaped politician hated by everyone’.

Lara Trump, wife of Eric Trump, is widely reported to be considering a 2022 Senate run

Back for another round: Donald Trump at his own Trump International Golf Club in West Palm Beach on Sunday, a day after he was acquitted by the Senate at the end of his historic second impeachment trial

On Sunday, McConnell told Politico that he was now focused on the future – with or without Trump’s support.

‘My goal is, in every way possible, to have nominees representing the Republican Party who can win in November,’ he said.

McConnell did not mention any names.

Candidates backed by Trump such as QAnon believer Marjorie Taylor Greene, who only entered Congress in January, have already caused him and his party significant headaches, with her previous incendiary comments.

Newly acquitted: Trump took to the golf course hours after the Democratic effort to convict him and potentially bar him from running for office again in 2024 fell ten votes short of the required supermajority

Other candidates likely to be backed by Trump, such as his daughter-in-law Lara, expected to make a run for the Senate in 2022, could not count on McConnell’s support, he said.

‘I’m not predicting the president would support people who couldn’t win,’ McConnell said.

‘But I do think electability — not who supports who — is the critical point.’

McConnell declined to say whether he would support the former president if he seeks re-election in four years time.

Shelley Moore Capito, a Republican senator for West Virginia, admitted that the party was at a crucial juncture with deep divisions between loyal Trumpites and those committed, like her, to McConnell.

‘I don’t know what happens to the party as a whole in terms of the folks deeply committed to President Trump,’ she told the site.

‘But I hope they stick with us.’

Andy Biggs, a representative for Arizona and head of the arch conservative House Freedom Caucus, said many people in his party were upset at McConnell.

‘A lot of people are frustrated with his comments. I’m not going to sugarcoat it,’ he said, adding that Trump’s influence remained.

‘The fact he is no longer in the White House does not mean he is not the leader of the movement he started four or five years ago.’

McConnell and Biggs could find themselves representing different, opposing, ends of the Republican party line in 2022.

McConnell has shown his support for figures like embattled Representative Liz Cheney, who voted to impeach Trump on January 13 and has been singled out by Trump-supporting Republicans ever since.

She is up for re-election in 2022, and it is already clear that she is going to face a strong challenge.

One of Trump’s staunchest supporters, Florida representative Matt Gaetz, even went to Wyoming last month to campaign against her.

‘The future of the party will be determined in places like Wyoming in ’22,’ McConnell said.

He spoke on the day Kentucky’s influential newspaper excoriated him in a column.

‘The good of the country has always come in second to the good of McConnell,’ she wrote

‘Everyone sees through him now,’ wrote Linda Blackford.

‘He may have helped create the modern Republican party, but when it most needed saving, he was nowhere to be found.

‘He could have given political cover to his colleagues to stand up to Trump and the attack on Jan. 6, but as I wrote before, the monster he helped create was no longer in his control.’

Blackford said ‘the history books will be clear about those who coddled and engendered Trump’s madness in the name of political power.’

She accused the 78-year-old of having ‘upended, diluted and blocked’ policies on poverty reduction and improving the lives of ordinary Americans throughout ‘his entire career in his quest for personal power.’

She added: ‘The good of the country has always come in second to the good of Mitch McConnell.’