Meghan Markle and Prince Harry showed off their distinctive bird nest artwork from Californian brand Barloga Studios during an interview in which they discussed racism today.

But the couple have also revealed several glimpses into their royal mansion.

Last week, The Duchess of Sussex, 39, made a surprise appearance on the season finale of the talent show to send a video message to singer Archie Williams, 59, a humble man who had been wrongly incarcerated for 36 years.

The royal spoke from the same plush living room, offering a sneak peek into the private life of the Duke and Duchess and the objects and personal treasures they hold dear including feminist titles and books on race. 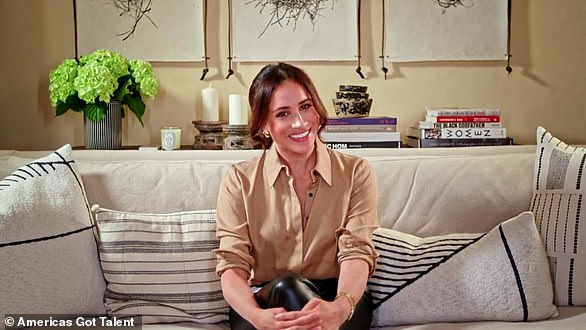 It’s not the first time the Duchess of Sussex has revealed her living room to the world, having previously appeared from the space on America’s Got Talent

The Duchess has long favoured mid-century modern furniture and a white colour palette, and added vibrant pops of colour with accessories such as a huge bouquet of flowers.

Her lavish home shows her love for white furnishings and luxury accents such as a the striped black-and-white cushions thrown on the sofa.

Despite having two dogs with muddy paws and a young toddler, the royals have bravely opted for a white couch in their living space.

It appears to offer a place in the room to relax and recline when not working, or perhaps a space to take meetings.

Meghan has always been a fan of fresh flowers,  with  pink peonies declared as her favourite.

The sideboard is decorated with several candles, including the £47 Diptyque Tubereuse candle, which is described online as ‘sensual, generous and luscious’ and ‘full of the heady and intoxicating fragrance derived from the sought-after Mexican white flower’. 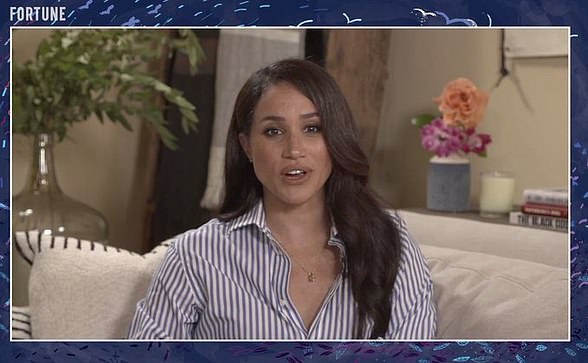 Earlier this week, the Duchess appeared from a different corner of her sofa for a virtual summit

According to it’s online description, it can ‘create an elegant ambience in the home for any occasion.’

The scented candle may be another piece selected by the Duchess, who has long been a fan of the brand.

She was known to have selected the Diptyque’s Figuier, with fresh wood, green notes and crushed fig leaves, for her home in Toronto.

The Duke and Duchess have artfully arranged books around the room, but turned one into a design features by perching them underneath several black decorative bowls.

Meghan performed a similar styling trick while working as an actress in Suits and living at her Toronto home.

Meghan and Prince Harry’s reading taste can clearly be seen displayed to the right of the image, where there is several books perched in a decorative pile.

Books include hardback Wood And Iron: Industrial Interiors, which offers a guide to those wanting to decorate their home in the distinctive style, and The Black Godfather, which depicts the story of music executive Clarence Avant, told by the people he worked with.

Meanwhile the Duke and Duchess also have a perchant for celebrity photographers, with several portrait books decorating their sideboard, including A Photographer’s Life: 1990-2005 by Annie Leibovitz and Marc Hom’s Profiles.