Lorraine viewers slammed Meghan Markle’s childhood sweetheart after he claimed there’s a ‘history of racism’ in the Royal Family.

Joshua Silverstein, a Los Angeles-based actor, who was Markle’s first kiss, aged 13, and dated her throughout that summer, appeared on the ITV show today and  praised the ‘courageous’ Duchess for speaking out about the ‘history of racism’ in the royal family during the bombshell Oprah Winfrey interview – despite knowing it would ‘create tension.’

Silverstein, now a married father of two, appeared via video link and told the Scottish presenter: ‘Meghan did Oprah and was very honest and transparent with her experiences in the royal family.

‘There’s a history of racism within the royal family that goes way back to the transatlantic slave trade. The fact Meghan is able to get on TV and bravely talk about that is awesome.’ 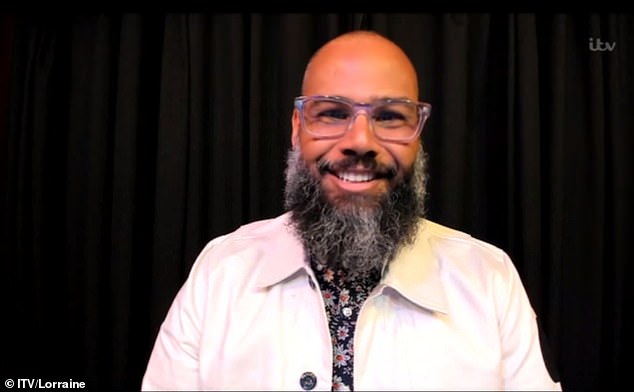 Joshua Silverstein (pictured), a Los Angeles-based actor, who was Markle’s first kiss, aged 13, and dated her throughout that summer, appeared on Lorraine and opened up about how he thought the Duchess of Sussex had dealt with recent criticism 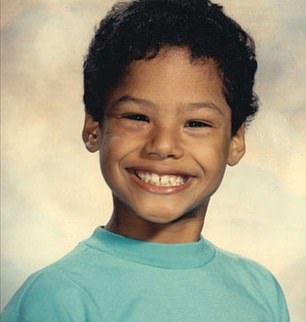 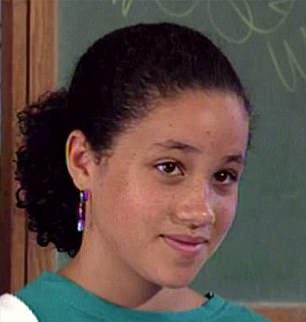 He continued: ‘Whenever people of colour speak out against oppression and racism, genuinely there’s a huge backlash so the fact she got up and spoke about that even knowing it could create a lot of tension between her and her family, I thought that was really courageous on her part.’

However, those who tuned in were left outraged by the claim, with one writing:  ‘Why have you just allowed somebody on your show to say that The British Royal Family are institutionally racist without asking him to back that up with facts?’

Another commented: ‘Why are we being told how racist the UK is by some unknown person. Lorraine just agrees. No balance.’

A third added: ‘Meghan’s ex-boyfriend Joshua spouts as much rubbish as she does. The Royal family is not racist!’ while a fourth raged:

‘I can’t believe that interview with Megan’s 1st boyfriend. What was Lorraine playing at. She allowed him 2 accuse the royals as being racist of Megan telling truths in her intv with OW. she didn’t correct him once. She’s gone right down in my opinion of her.’

Joshua went on to explain how he doesn’t believe change can take place unless people are ‘willing to have a conversation.’

Taking to the comments section, viewers were outraged by Joshua’s claims, with one writing: ‘Why have you just allowed somebody on your show to say that The British Royal Family are institutionally racist without asking him to back that up with facts?’ (pictured) 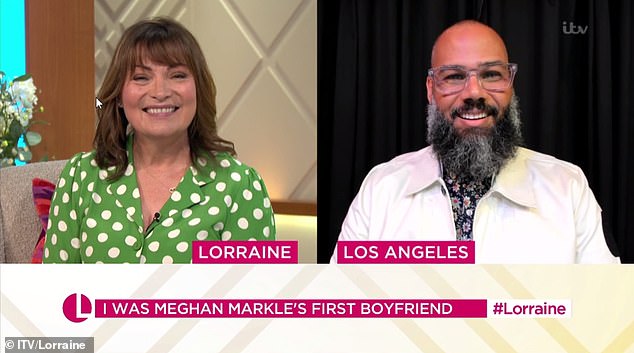 Joshua said Meghan was always a ‘strong, confident young person’ and always had a ‘very clear idea of where she wanted her path to take her.’ Pictured left, Lorraine and right, Joshua 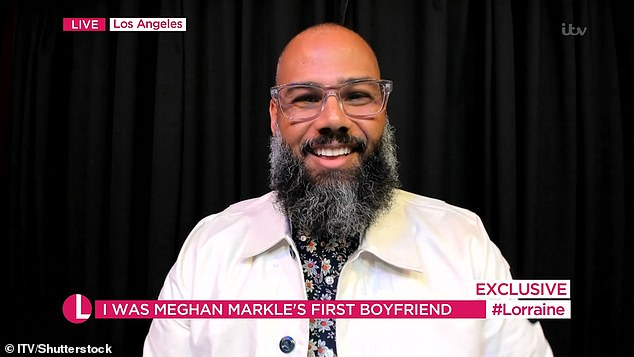 Joshua also told how he got on well with Meghan’s mother and stayed in contact with her too, throughout the years.

‘You look at any history of politics, things only start to look different when opposing sides are both brought to the table and they have a conversation,’ he said. ‘That’s the way it’s always worked.’

‘I think the more and more people become honest about their role and privilege and all the darkness in the past, then we can move forward.

The unfortunate role of humanity is that we want to pretend thing are great and wear our rose-coloured glasses but that’s just denial. The more people can speak comfortably and confidentially about pain and trauma. then healing can begin.’

Speaking of what Meghan was like at high school, he said: ‘Meghan was always a strong, confident young person. It was always clear when we was together that she had a very clear idea of where she wanted her path to take her.’

Lorraine went on to ask what it was that Joshua saw in Meghan that made him want to make her his girlfriend.

‘I think as she told it, she approached me, so I think that in itself was very attractive that a young person would have the confidence and walk up to me and tell me that she thought that I was attractive or anything like that,’ he said.

Silverstein, now a married father of two, appeared via video link and told the Scottish presenter: ‘It seems like she’s handling it well. She did Oprah and was very honest and transparent with her experiences in the royal family. Pictured, during bombshell Oprah Winfrey interview

Prince Harry said his first thought was ‘amazing’ when he discovered they were having a girl, adding: ‘Just grateful. To have any child, any one or any two, would have been amazing.

At that time we was together it’s what kids did. She told her friends she liked me, I told my friends I liked her. Our friends met and they kind of arranged it and then we became girlfriend and boyfriend.’

Lorraine went on to explain on the pair have stayed in touch, and questioned whether it was strange when Joshua found out his ex was going to marry into royalty.

‘My only thought when I found out that she was going to be marrying Harry was that I hope she’s happy,’ said Joshua. ‘That’s all that matters. Love is love.

‘No matter what the relationship looks like or what the background is, as long as that love is authentic, honest and real then I’m happy for her.’

Joshua went on to say how he got on well with Meghan’s mother Doria Ragland and stayed in contact with her too, throughout the years.

‘Meghan and I dated when we were kids, broke up before high school and we stayed friends throughout high school,’ he said.

‘I would see her every now and then at the church we were going to but I mostly stayed in contact with her mum.

Her mum would let me what she was up to. ‘Megs is doing this, Megs is in Canada, Megs is modelling, Megs is acting.’

I knew she was definitely staying busy and staying  on her trajectory on success.’

Joshua added: ‘I hope that whatever Meg is doing in this moment she knows she can trust me. I definitely have nothing but respect for her and what it looks like she’s doing’

‘I love that her and Harry are working on this documentary with Oprah about mental health.

‘I even heard she might run for office in the states here so depending on who she surrounds herself with, that could be great.

‘I support her as long as she’s keeping her focus on change, awareness and making the world a better place – that’s awesome.

Lorraine went on to ask Joshua what his wife makes of his very famous ex-girlfriend.

‘Cynthia was very thrilled at the beginning of this whole thing,’ he said.  My wife has been really obsessed and very much into the royal family history and the fact I know someone that is part of that narrative makes her very excited.’

‘They’re about to have two children which is super awesome for her. It’s a big deal to raise kids in this current climate. She has a lot of access and a lot of responsibility to the country now. She’s a figure head.

‘The fact she’s a mother and this pop culture figure, she’s got a lot on her hands.’

With many of us now cleared to take off our masks, there are some that still don't want to

1000’s of sufferers considered in a vegetative state are actually awake, consultants warn

Do you have to put money into Newell Manufacturers in Q3 as shares fall amid provide chain headwinds?