A super-fit conference coordinator who was looking forward to starting a family with her partner had her world turned upside down after being diagnosed with breast cancer.

The 31-year-old told FEMAIL she was lying in bed when she felt a small lump in her right breast, which she initially disregarded as muscle tissue.

‘When I felt it again a few days later I was prompted to go straight to the doctor,’ said Ms Egay, who experienced no other symptoms.

A series of scans on August 31, 2020, revealed Ms Egay had triple-positive early invasive breast cancer, a fast-growing and aggressive form that accounts for 15 to 20 percent of all breast cancers worldwide. 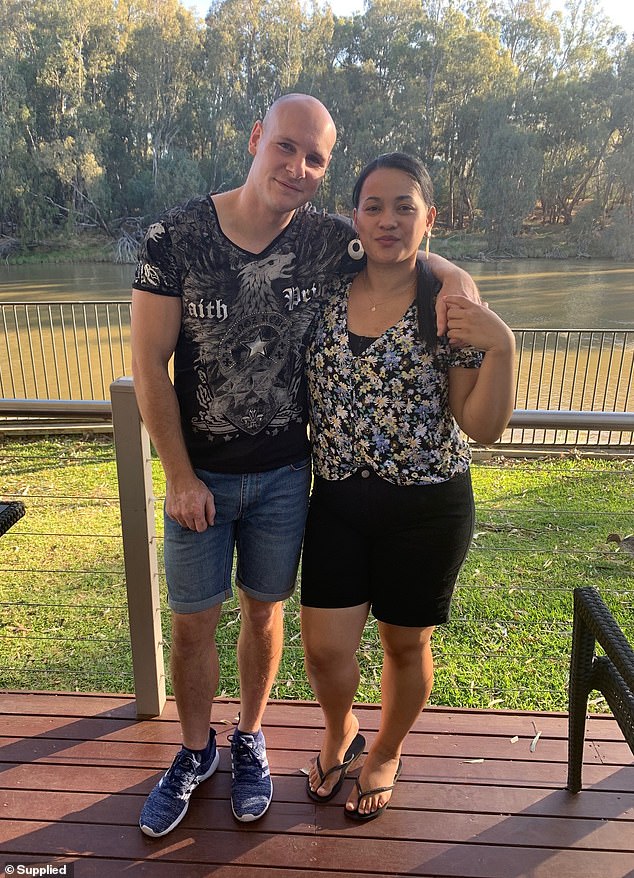 Melbourne woman Shylla Egay (right) was looking forward to starting a family with her partner but was diagnosed with triple-positive early invasive breast cancer on August 31, 2020 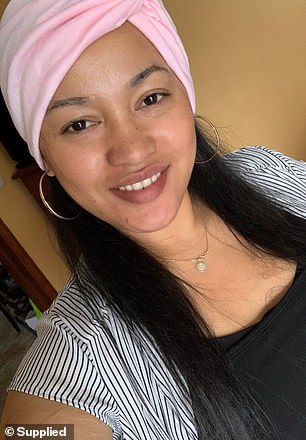 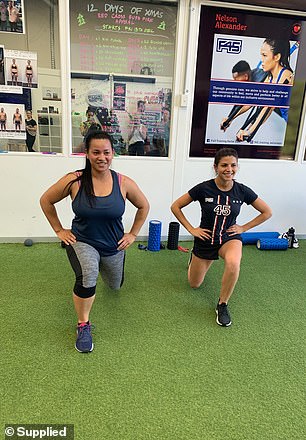 The 31-year-old (left and right, during an F45 training session) said she was lying in bed when she felt a small lump on her right breast, which she disregarded at first

Doctors told Ms Egay that because hers is a form of hormonal cancer, there is nothing she could have done differently in terms of lifestyle to prevent it from occurring.

Before her diagnosis, Ms Egay endured a ‘stressful time’, visiting a doctor to check ongoing issues associated with other parts of her body.

But concern quickly shifted to her breasts.

‘I frantically booked in to have an ultrasound and MRI scan – which was the same week I was worried about my other health problems,’ she said.

The scans detected five small lumps in her right breast, but only one of the 2cm masses was cancerous and likely to grow.

‘When the doctor told me the results, it didn’t hit me until she started repeating “I’m so sorry” – I just cried in the car thinking about how I would tell my partner and mum,’ she said.

‘I was devastated, confused and kept thinking “no, there’s a mistake and my doctor will call me to say there was a misunderstanding”. It was really hard to process.’ 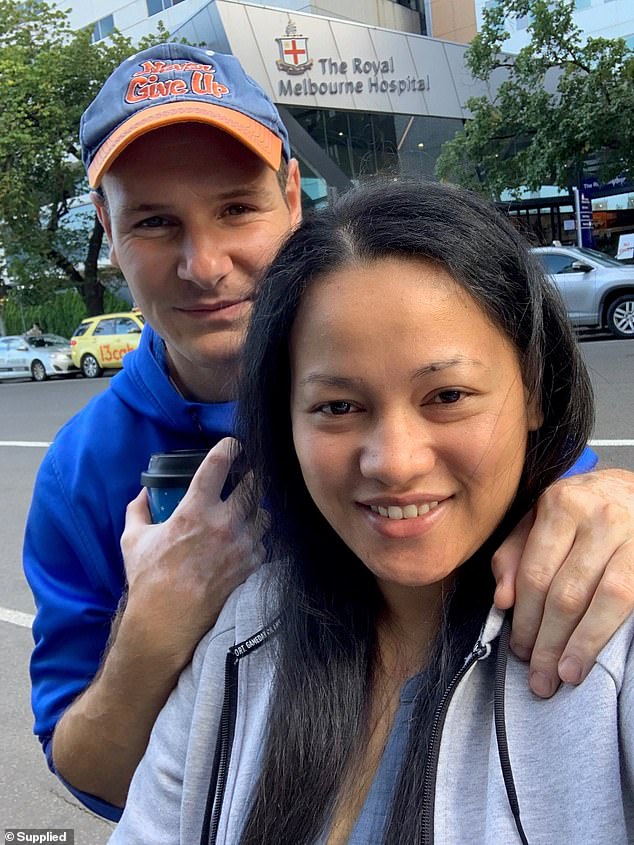 Doctors told Ms Egay (pictured with her partner) that because hers is a form of hormonal cancer, there is nothing she could have done differently in terms of lifestyle to prevent it from occurring. 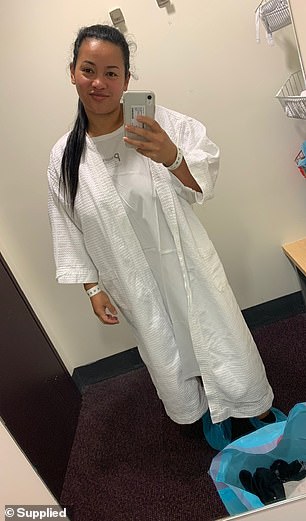 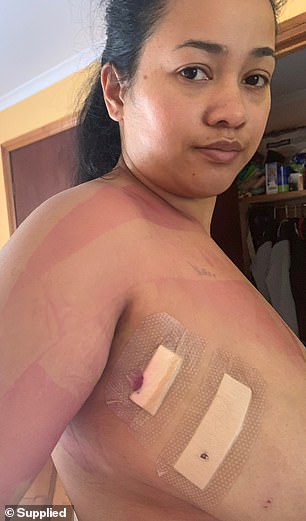 ‘From there I just took it one step at a time and had a lumpectomy to remove the tumour at the end of September,’ she said (pictured before and after lumpectomy)

‘From there I just took it one step at a time and had a lumpectomy to remove the tumour at the end of September,’ she said.

Doctors also removed her lymph nodes to check if cancer had spread beyond the original growth site, but thankfully it had not.

Ms Egay decided to undergo IVF procedures before starting chemotherapy to give her a chance at becoming a mother.

‘We were hoping for 10 to 20 eggs but only had two eggs overall after two treatments, which was very disappointing,’ she said.

How to self-examine your breasts:

Step 1: Begin by looking at your breasts in the mirror with your shoulders straight and your arms on your hips.

Here’s what you should look for:

If you see any of the following changes, bring them to your doctor’s attention:

Step 2: Now raise your arms and look for the same changes

Step 3: While you’re at the mirror, look for any signs of fluid coming out of one or both nipples (this could be a watery, milky, or yellow fluid or blood)

Step 5: Finally, feel your breasts while you are standing or sitting

Many women find that the easiest way to feel their breasts is when their skin is wet and slippery, so they like to do this step in the shower 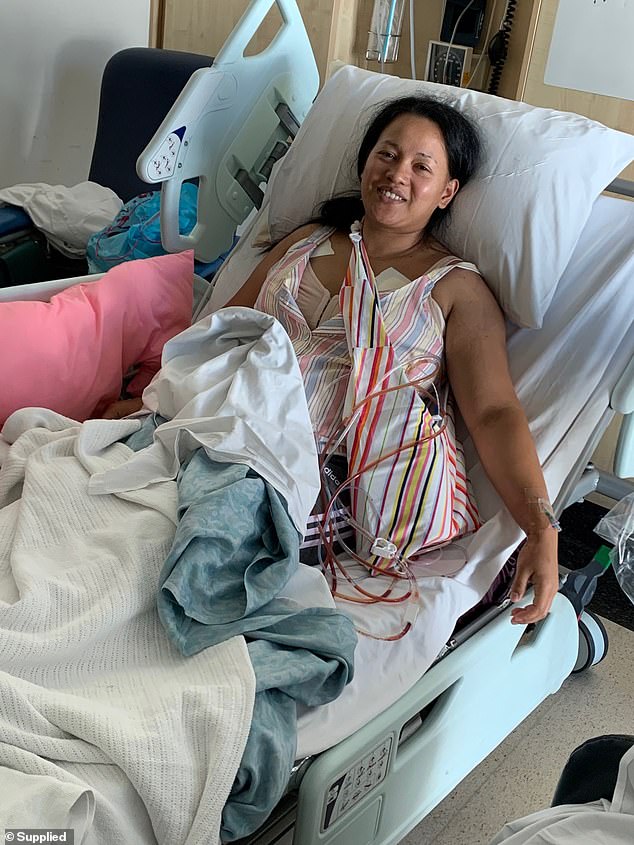 After chemotherapy, doctors told Ms Egay she needed a double mastectomy to prevent cancer from returning (pictured after surgery)

She started her first round of chemo on November 20, continuing once every three weeks for the following three months.

To prevent hair loss, Ms Egay had a treatment called scalp cryotherapy – a type of cold-therapy where the patient wears a cap during chemo to cool blood vessels on the scalp, which prevents chemicals from travelling to that part of the body.

‘It worked well but I was left with patches as the cap didn’t fit my head right, it would move during chemo,’ she said.

After the treatment doctors told Ms Egay she needed to a double mastectomy – removal of both breasts – to prevent cancer from returning.

‘I was shocked about that too because I didn’t want to lose my breasts,’ she said. 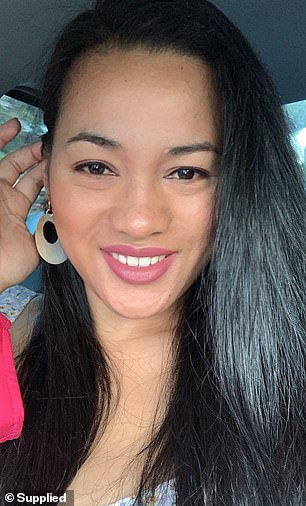 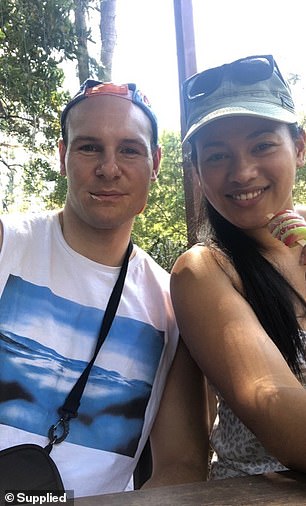 Since her mastectomy Ms Egay (left and right) has been taking myriad medications including Tamoxifen, to prevent the cancer from returning and growing, and Zoladex to suppress production of sex hormones and preserve her ovaries

What are the common symptoms of breast cancer?

* Changes in size or shape of breasts

* Changes to the skin including dimpling, a rash or puckering of the breast

* Inflamed breast where your breast may look red or swollen

* A red, scaly rash on the breast

Since then she has been taking myriad medications including Tamoxifen, to prevent the cancer from returning and growing, and Zoladex to suppress production of sex hormones and preserve her ovaries.

Due to the effects of Zoladex, Ms Egay will likely be able to carry her own children, but she and her partner are unsure about what to do with their IVF embryos.

‘I would’ve liked to have kids at the end of this year, but it’s only been pushed back by a year and a half after I stop taking the medication,’ she said.

Ms Egay urges women to be diligent with breast checks and also encourage loved ones to go for regular checks.

NRL live: The Dragons and Warriors kick off Sunday footy