As Victorians face a snap seven-day lockdown, many are contemplating another  cold winter of isolation.

And lurking in the back of their minds is the fear that seven days could easily turn into seven weeks.

The anger and uncertainty on the streets of Melbourne is palpable – not seen since the dark days of the state’s own disastrous quarantine blunder. 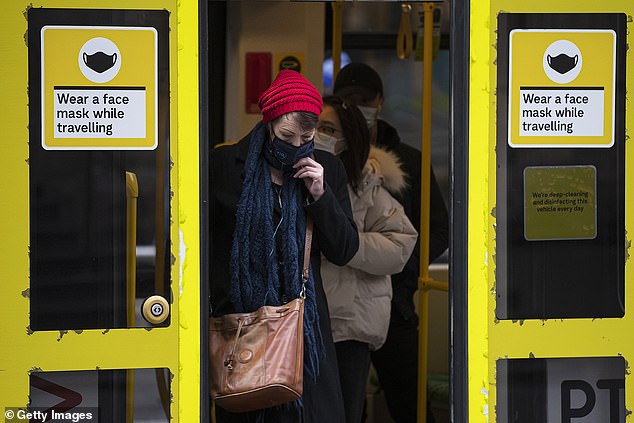 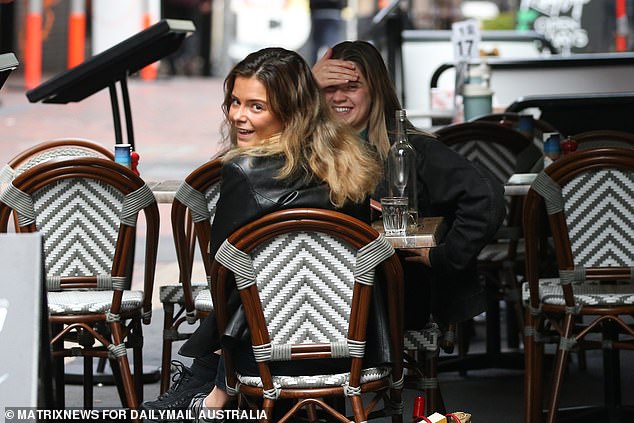 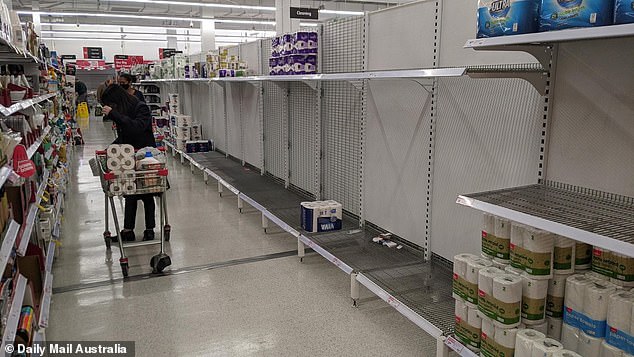 A supermarket in Melbourne’s inner west had been packed with toilet paper before the 11am lockdown announcement. It was decimated just hours later

Do you blame the Andrews Government or Morrison Government for Victoria’s latest Covid outbreak and lockdown?

Even on Thursday, as Melburnians enjoy their last moments of freedom before being locked up, CBD didn’t bother ensuring customers check in using the QR code system.

It was only weeks ago the Victorian State Government warned businesses found intentionally flouting the Chief Health Officer’s rules – such as the requirement to use QR Code systems – would be slapped with a new $1,652 on-the-spot fine.

The warning fell on deaf ears with Daily Mail Australia entering several businesses on Thursday without being asked to check in.

The anger was evident on Melbourne talk back radio before the lockdown had even been introduced, with Melburnians reporting a mass exodus of people across the borders. 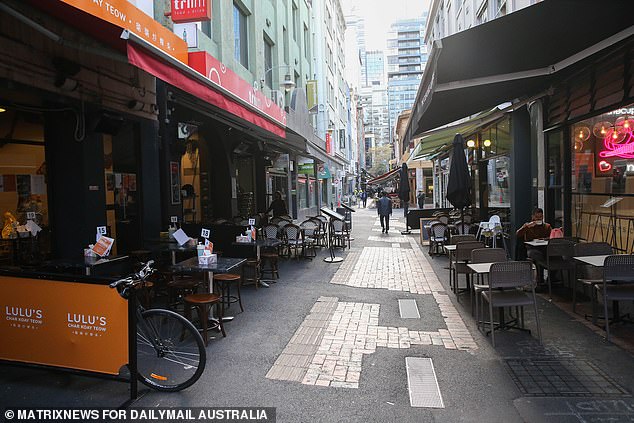 Streets are already eerily quiet ahead of the stage 3 lockdown in Melbourne. Just last week, the city appeared to be bouncing back to its former glory 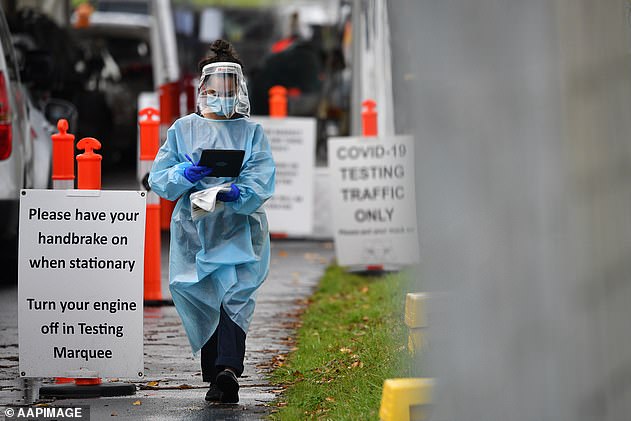 Victoria Police are bracing for trouble outside Flinders Street Station in the heart of Melbourne about 7pm tonight.

Although the location of the planned action is likely to remain a secret until the last possible moment.

Lunchtime in Melbourne had descended into scenes not witnessed since COVID-19 decimated the city early last year.

By 2.30pm hardly a person could be seen wandering the streets.

Just last week, the city appeared to be bouncing back to its former glory, with pubs and restaurants crammed with customers.

By tomorrow, they will again be forced to closed their doors to all but a trickle of business.

Again, the Victorian Government blamed Victorians for the lockdowns.

‘The vaccine rollout has been slower than we have hoped,’ Mr Merlino said in announcing the lockdown. 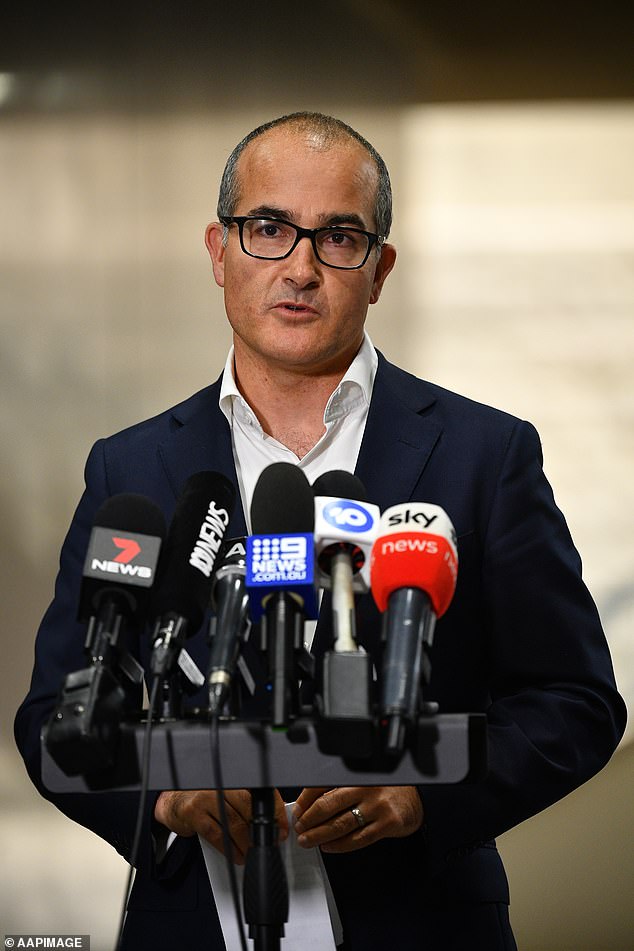 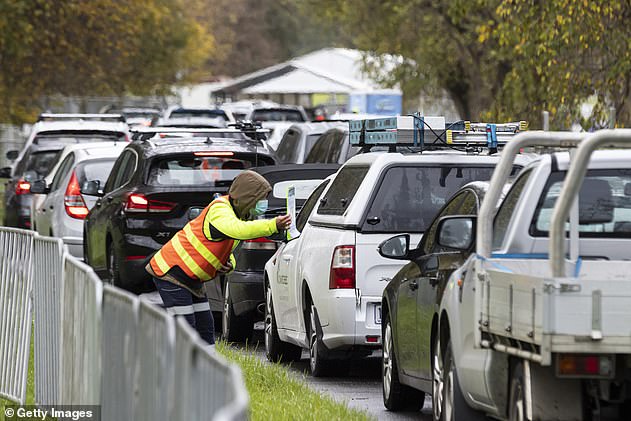 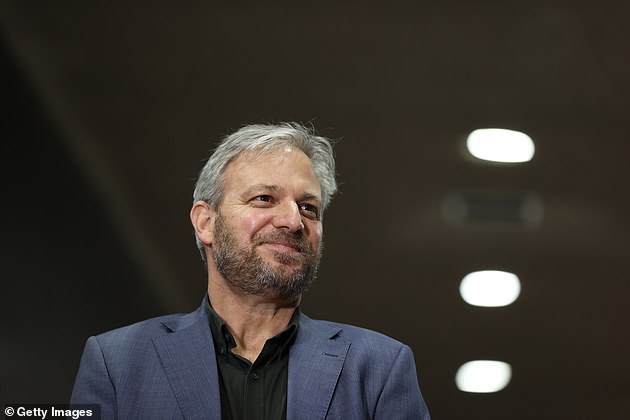 ‘We have also seen a reluctance from some people to get vaccinated when they are eligible,’ he said.

‘It is a fact that we have aged care facilities where not one person has been vaccinated. These are facts. We need to get this vaccination rolled out as quickly as possible, and that is why we have been doing a lot of work about how we can quickly expand what we offer at our state sites.’

A day earlier, funny man Mick Molloy could hardly contain his rage at the bungled efforts by the federal government to entice people to get the jab.

Molloy had gone out of his way to publicise his own jab a little over a week ago in the hope others might follow his lead.

‘We had a stupid milkshake commercial the other day for something that they spent an inordinate amount of money on – that lasted one day,’ he said.

‘Where are our targets? This is a rudderless ship. It makes me so angry. Originally we were all going to be done by October … now they’ve just said it’s not going to happen.

‘There’s no new target. There’s nothing to aim for. No-one is actively trying to achieve anything. There’s no incentive.’ 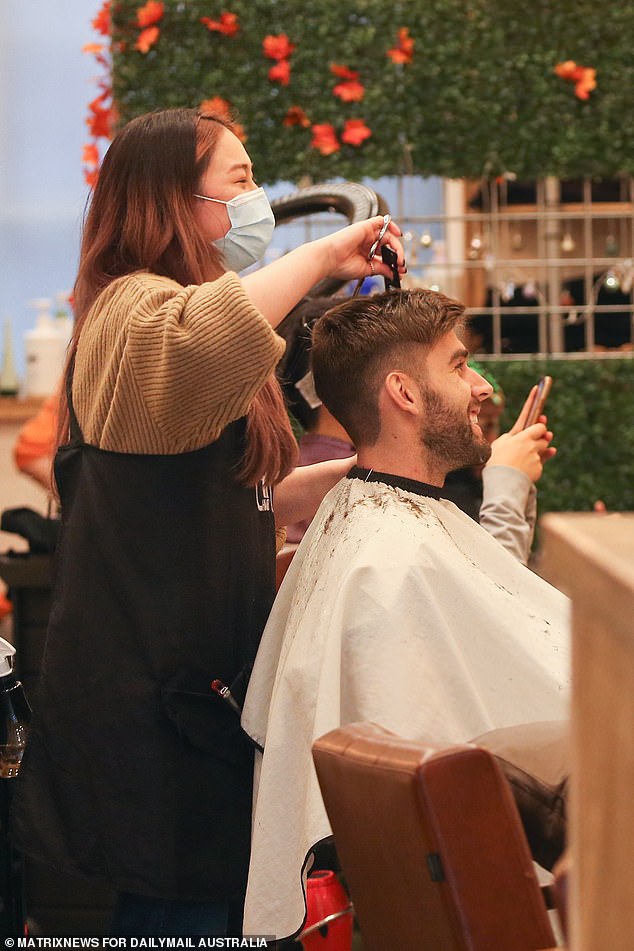 Last Cut: A Melbourne man enjoys his last hair cut, The state says it will only be seven days, but history says it could well be seven months 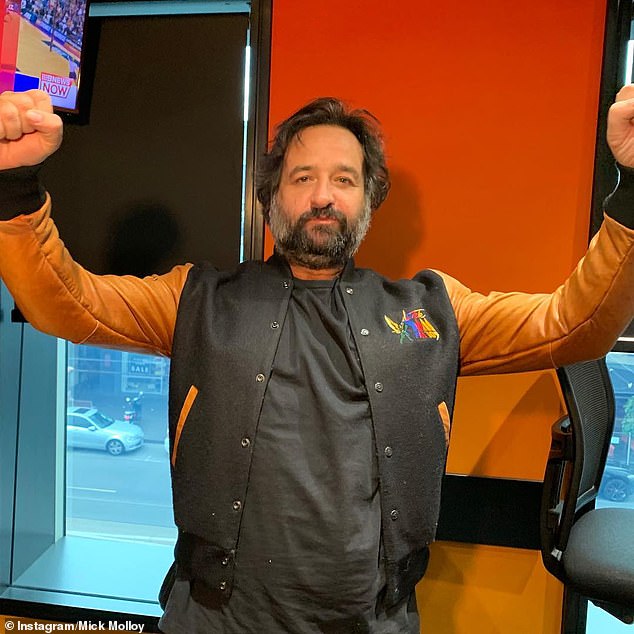 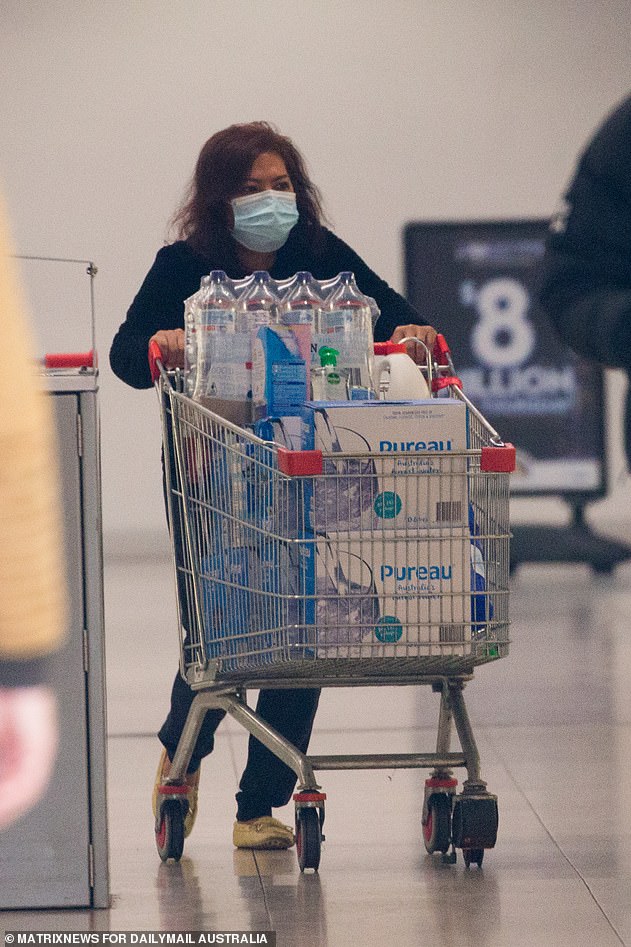 A woman leaves a Footscray supermarket loaded with water bottles 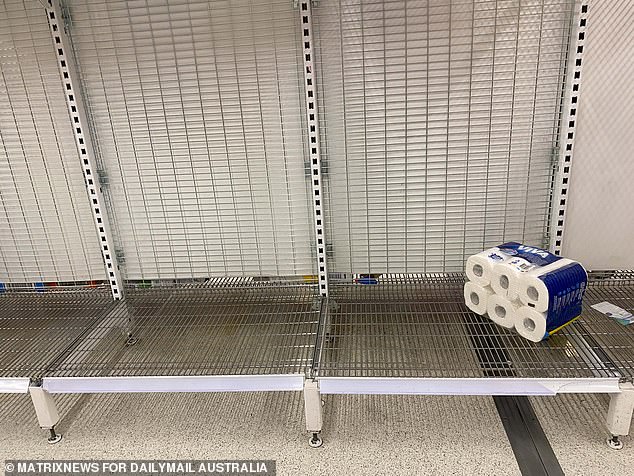 Meanwhile, pharmacies across Victoria sit idle with empty testing pods after being unable to secure government approval to give the jabs.

Mr Merlino’s words come as a familiar slapdown from Victorians accustomed to copping the blame for government failures.

During the state’s second deadly outbreak, Premier Daniel Andrews had blamed Victorian families for spreading the virus when it in fact had escaped from his own bungled quarantine program.

While this outbreak has been linked back to South Australia’s woeful quarantine system, Victoria’s contract tracers have admitted to bungling the location of a likely infection zone on its own soil. 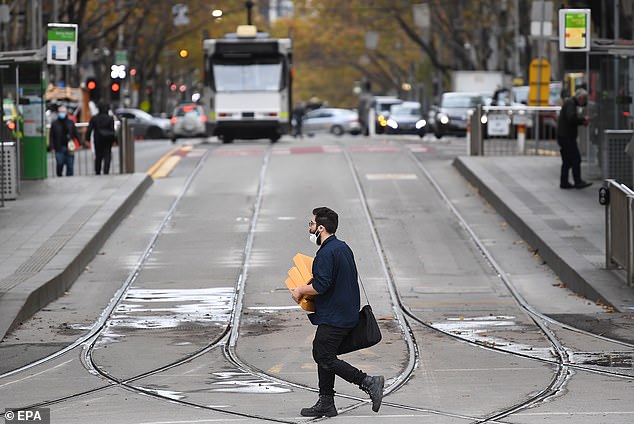 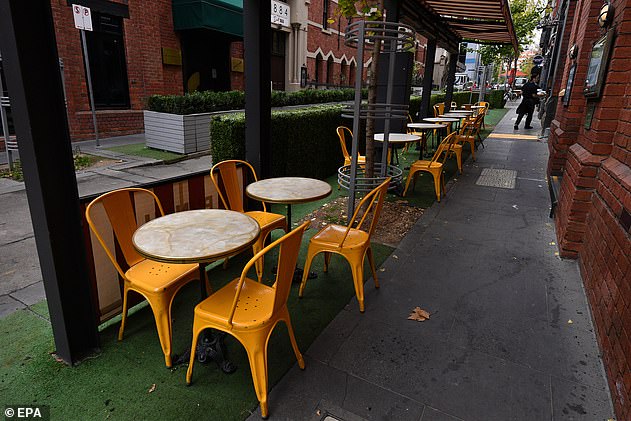 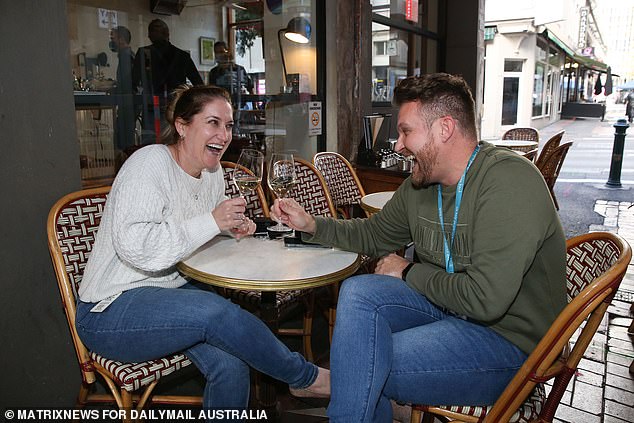 Elisa and Josh are seen sharing a wine in Melbourne’s CBD, hours before restaurants and bars close in Melbourne

‘It is an absurd proposition that contact tracing has gone wrong,’ he said.

‘We have talked about exactly what the contact-tracing team have done here, and it is extraordinary. Contact tracing is an integral part of how to get control. It does not do magic.’

But as Mr Merlino chastised Victorians for failing to get the jab on Thursday, those hoping to get it were enduring another form of hell.

Daily Mail Australia was told scores of Victorians attempting to book into get the vaccine endured waits of more than three hours to speak to someone.

‘So get this, finally got through on the covid vaccine booking line and was told that they can’t help after three hours on hold as the lines had crashed and my call was transferred to another department,’ Point Cook resident Joe Borg said. 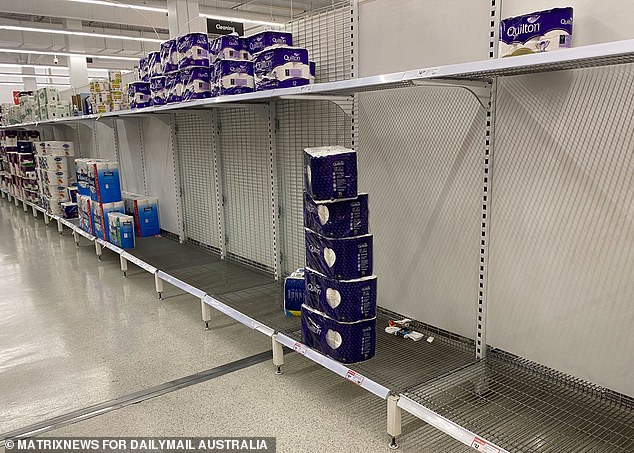 History repeats: There was a mad rush for dunny paper as soon as the lockdown was announced 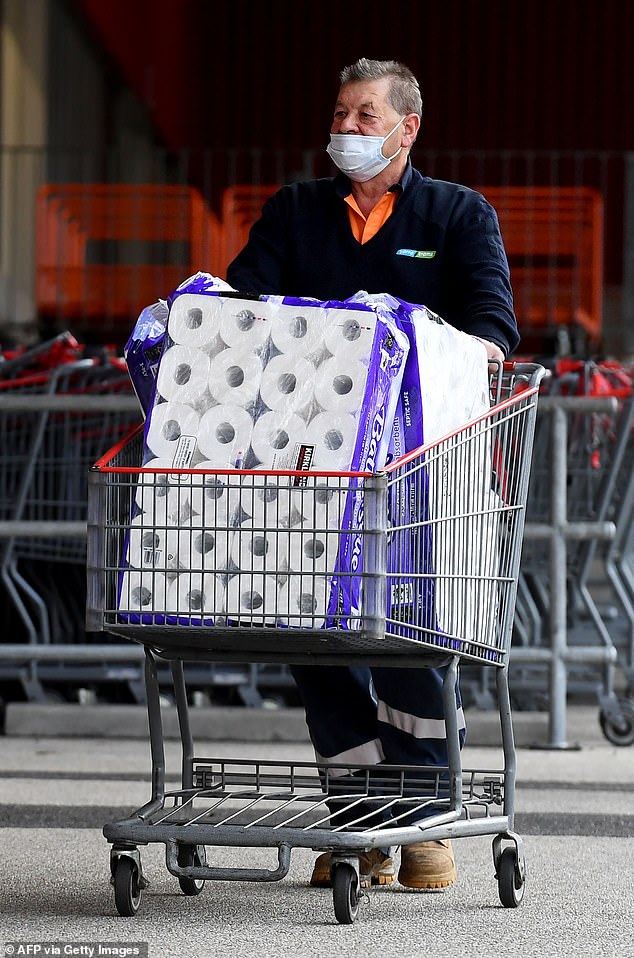 The rush on toilet paper had already began on Wednesday night, but by 11.30am on Thursday had turned into a frenzy.

Supermarket aisles stocked with mountains of toilet paper in the morning had been reduced to scraps by the afternoon.

Daily Mail Australia observed scores of people walking out with multiple packs of toilet paper that contained more than 30 rolls a package.

COVID-19 testing sites were cram packed with people waiting to be tested.

In outer suburban areas, the waits were even longer.

Over the coming days, Victorians gripped in grief and those anticipating the best day of their lives will be joined in misery.

While a miserly 10 people will be able to attend funerals in person tomorrow, those having a weddings will be forced to cancel it altogether.

Those planning to attend the football, will be confined to their homes – some stuck with their families.

As the sun sets on Melburnians’ freedom once again, its citizens retreat to the confines of their homes and an uncertain future.

Only five reasons to leave home:

No visitors to your home other than an intimate partner. Single bubbles will be permitted. If you live alone, you can make a bubble with another person.

· Restaurants, pubs, and cafes can provide takeaway only.

· Childcare and kinders will be open as per the last circuit breaker lockdown earlier this year.

· Approved professional sporting events will proceed but proceed without crowds.

· Schools will move to remote learning, except for vulnerable children, and children of authorised workers.

· Higher education will move to remote learning only.

· Community support and recreation, accommodation, but there will be some exemptions that apply.

· Hotels, clubs, TABs and the casino will be closed,

· Aged care facilities, no visitors except for limited reasons.

· In our hospitals, visitors only for end of life, to support a partner during birth, or a parent accompanying a child.

· In terms of ceremonies, funerals, a maximum of 10 people plus those running the service.

· Religious activities will not proceed other than through broadcast with a maximum of five people.

Moment 'get rich quick' Instagram trader, 20, who 'scammed people out of £3.8m' is confronted

Tottenham 'open talks' with Mauricio Pochettino who 'WANTS' to return

Are Meme based Stocks AMC and GameStock Rallying Again?