Melinda Gates enjoys a girls’ weekend with her daughter Jennifer, 25, in NYC


Melinda Gates was spotted enjoying a girls’ weekend with her daughter Jennifer in New York City, just days after soon-to-be ex-husband Bill opened up about their split, tearfully telling the Sun Valley crowd ‘I blame myself’.

Melinda, 56, was all smiles as she was pictured strolling through the streets of the Big Apple and lounging in her hotel suite with her 25-year-old daughter and her daughter’s girlfriends over the weekend.

Jennifer posted a slide show of three snaps on her Instagram Wednesday writing: ‘Such a joy having these ladies visit me this past weekend in the city that’s starting to feel like home.’

Melinda and Bill sent shockwaves around the world back in May when the power couple announced they were divorcing after 27 years and three children together.

Since then, Bill has been rocked by numerous claims he pursued extramarital affairs and acted inappropriately toward female Microsoft employees, while his friendship with convicted pedophile Jeffrey Epstein has also fallen under the spotlight. 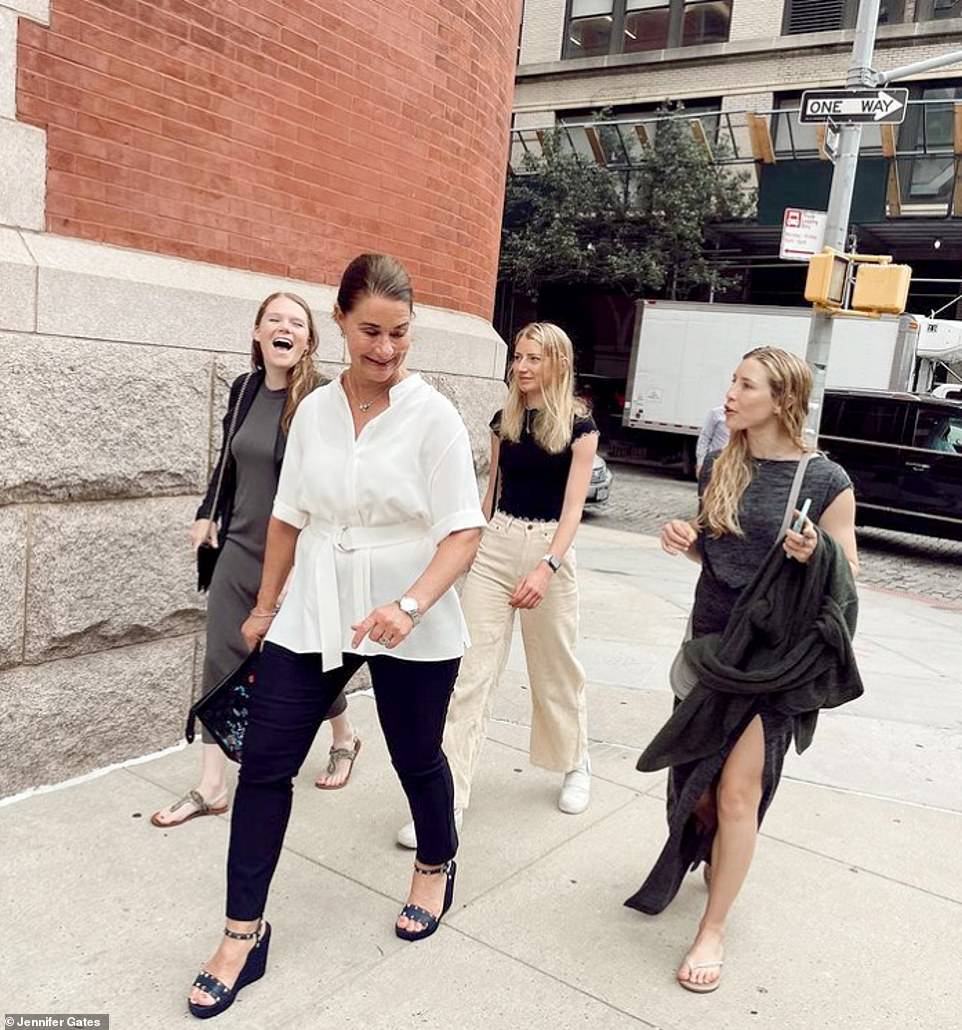 Melinda Gates was spotted enjoying a girls’ weekend with her daughter Jennifer, 25, and her friends in NYC in photos posted on Jennifer’s Instagram. Melinda and her daughter’s three friends – Paige Bellissimo, Cate Guyman and Taylor Alexander – were all smiles while Jennifer is thought to be behind the camera 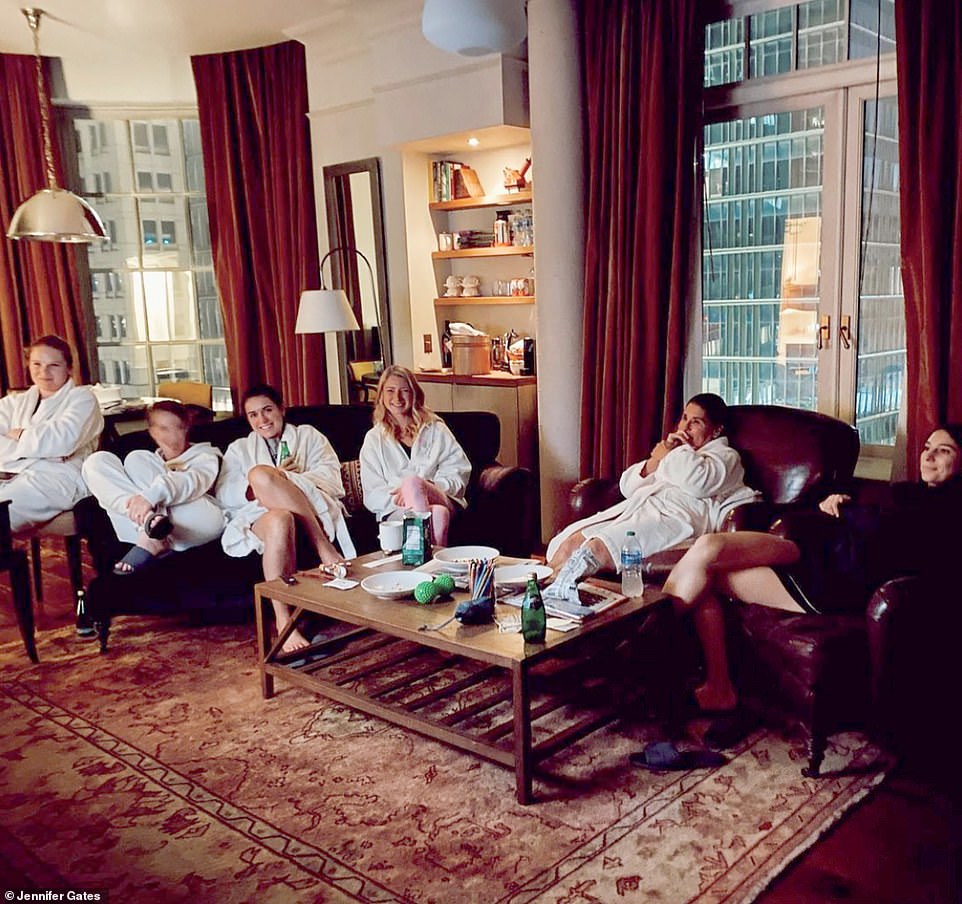 Melinda, 56, is seen second from right lounging in a suite with her eldest daughter’s girlfriends inside the trendy Greenwich Hotel in Manhattan 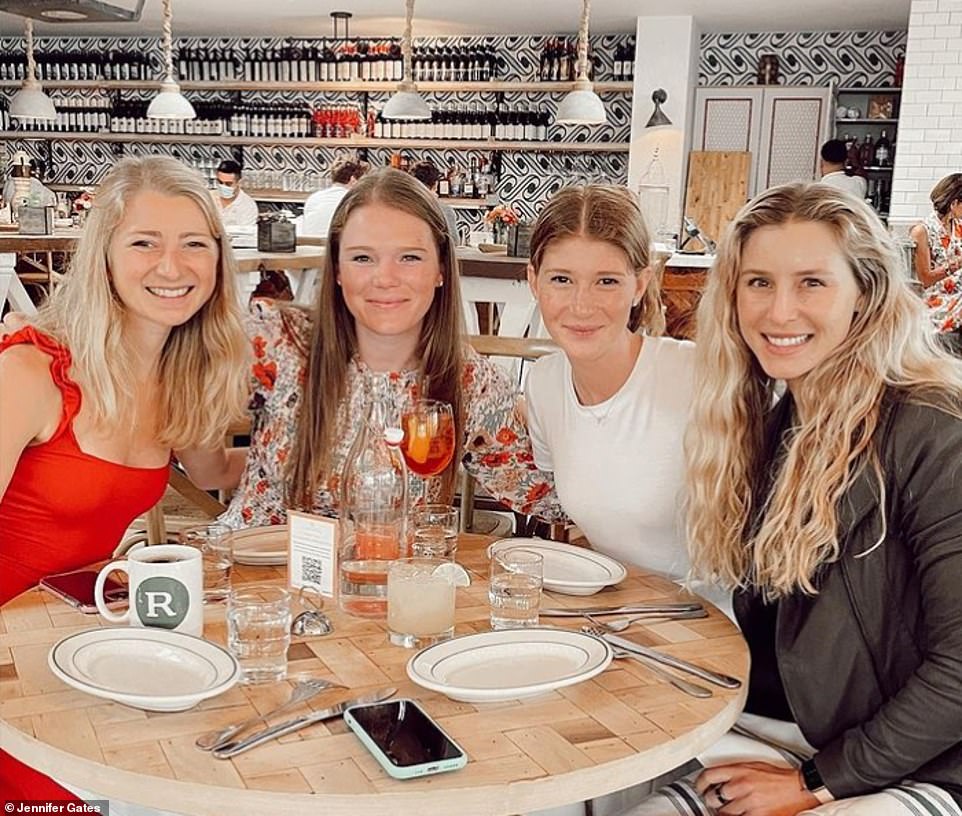 But the divorce proceedings seemed a distant memory for Melinda this past week as she spent quality time with her eldest daughter and lived it up in the Big Apple.

In one photo posted by Jennifer, the 56-year-old philanthropist beamed as she walked along a sidewalk in the city with three of Jennifer’s pals.

Melinda looked every inch the independent woman in a chic white blouse, black pants and wedges while she wore her hair tied back in a smooth ponytail.

Her daughter’s three friends – Paige Bellissimo, Cate Guyman and Taylor Alexander – also appeared to be having a great time, with grins plastered on all their faces while Jennifer is thought to be behind the camera.

Bellissimo is the daughter of Mark Bellissimo – a real estate developer, prominent figure in the equine world and long-time business associate of Donald Trump.

Trump helped Mark launch a showjumping event at Mar-a-Lago before he ran for president.

Bellissimo is also the chairwoman of the Brooke USA Young Leaders Initiative, a philanthropic venture that supports young leaders in the equestrian industry.

Alexander and Jennifer are also ambassadors for the initiative. Jennifer is an equestrian, taking home a second place prize and third place prize at Old Salem Farm in North Salem, New York, back in May.

In another photo shared by Jennifer Wednesday, the girl gang was seen lounging in a suite in the trendy Greenwich Hotel in Manhattan, which Melinda was using as her base for her getaway.

The group kicked back on the sofas in their bathing robes and pajamas Saturday night for a slumber party style gettogether where, according to Jennifer’s Instagram story, they watched Sex and the City.

‘My idea of a perfect Saturday night (Watching sex and the city in pjs),’ the 25-year-old wrote.

Jennifer appeared to take the two snaps of her mom and friends as she wasn’t in them but joined in the photos in one picture in the collection, where she was seen dining out with her pals.

Absent from the sweet snaps of the trip was the presidential-grade security detail that Melinda was spotted with over the last week as she enjoyed her trip to the Big Apple.

Melinda was flanked by a staggering six bodyguards and three SUVs during a visit to the private club Zero Bond last Thursday, Page Six reported. 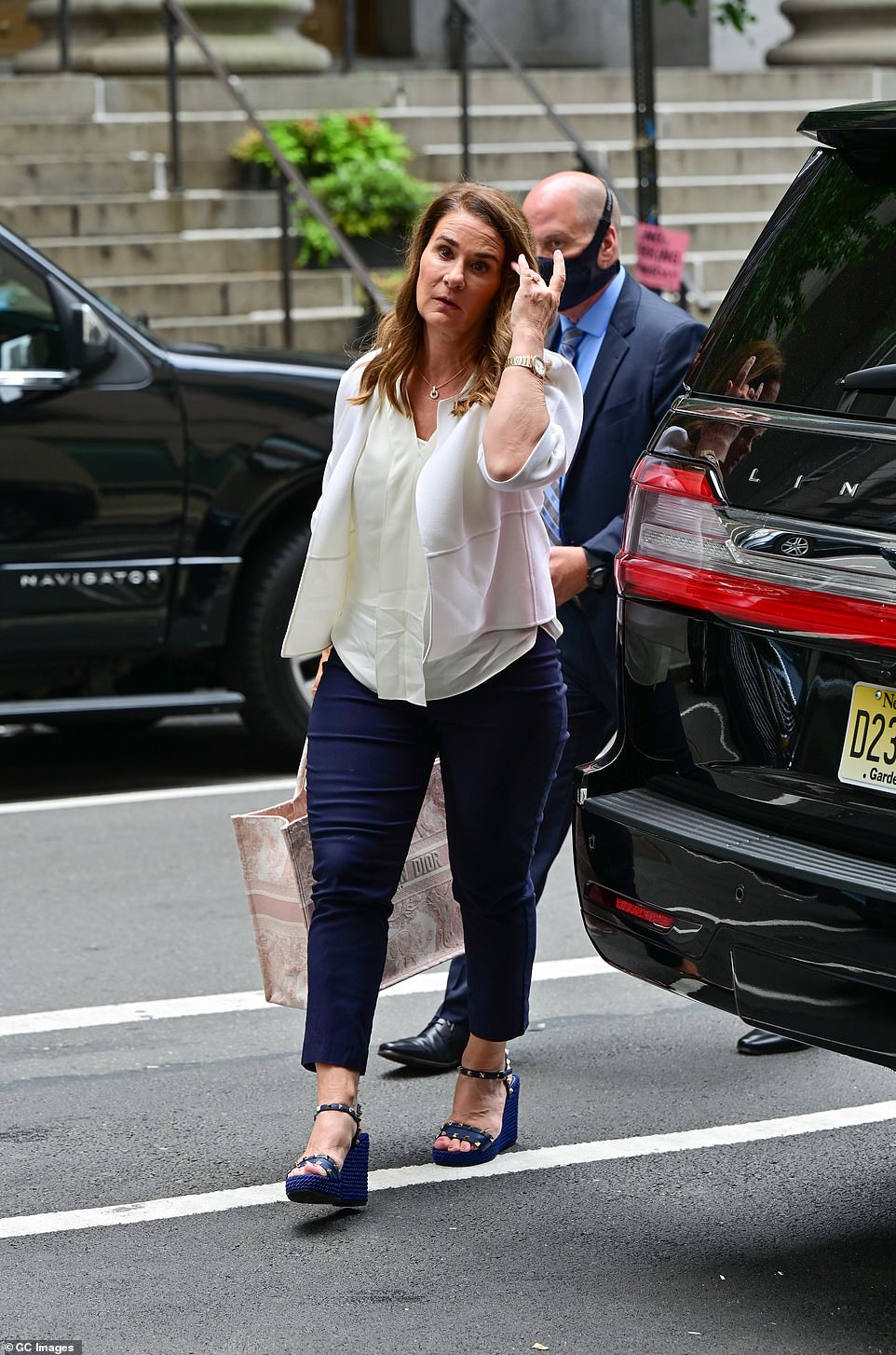 Melinda looked every inch the independent woman in a chic white blouse, dark pants and wedges last Thursday in NYC 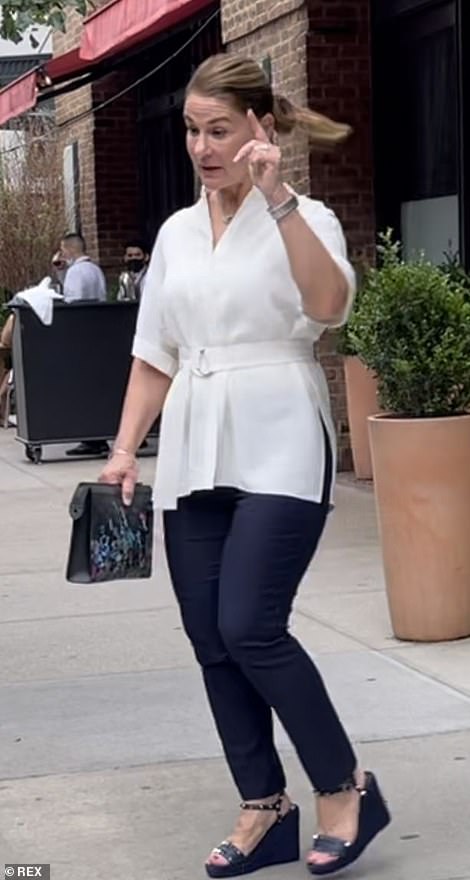 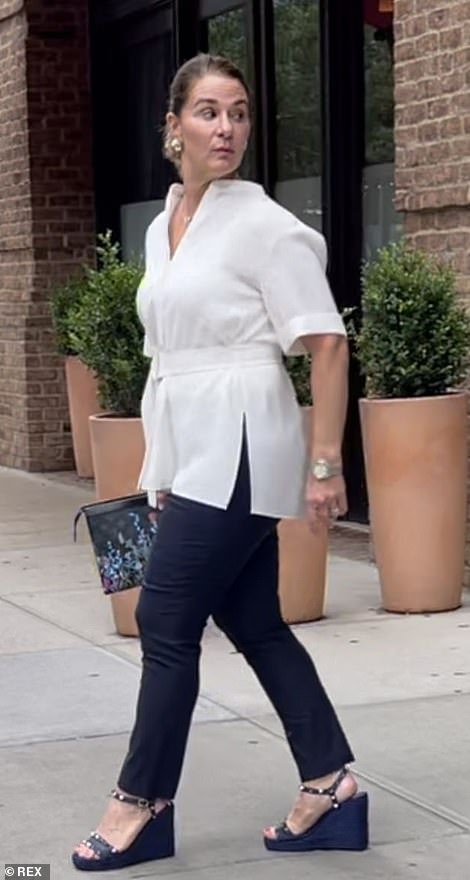 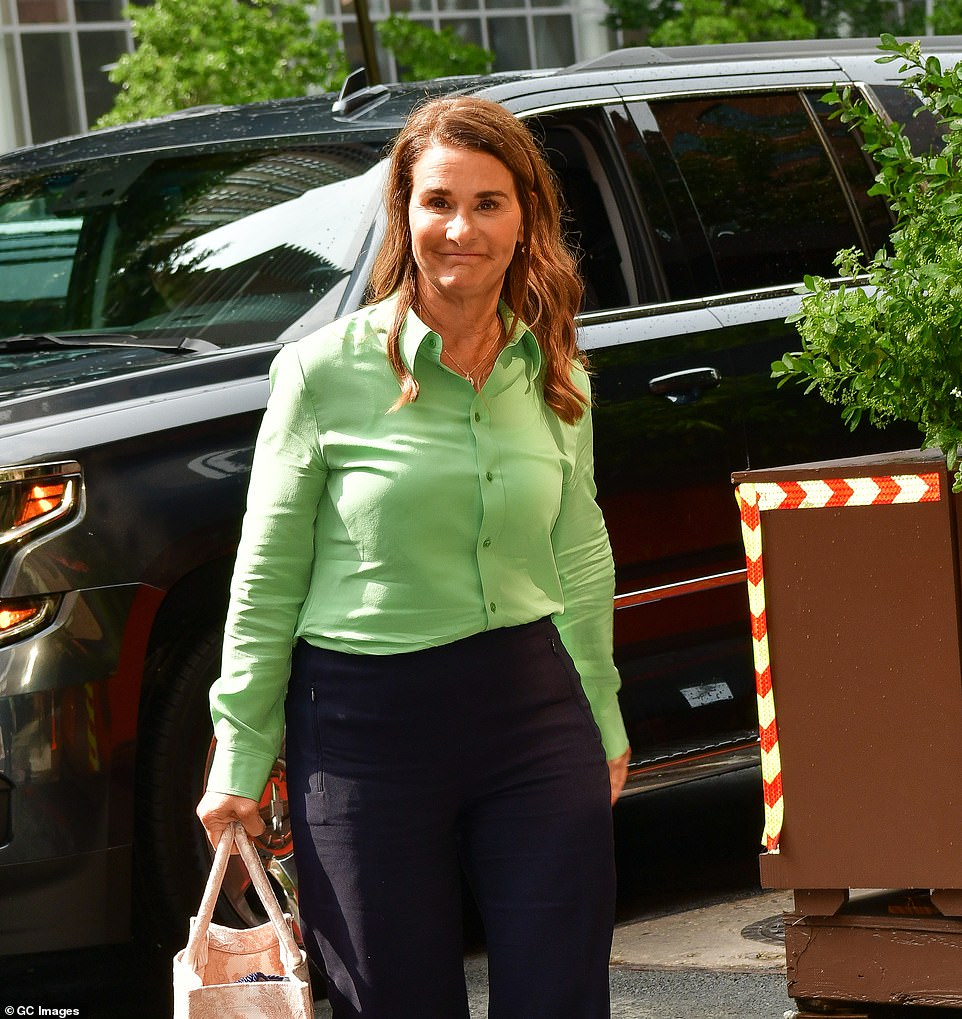 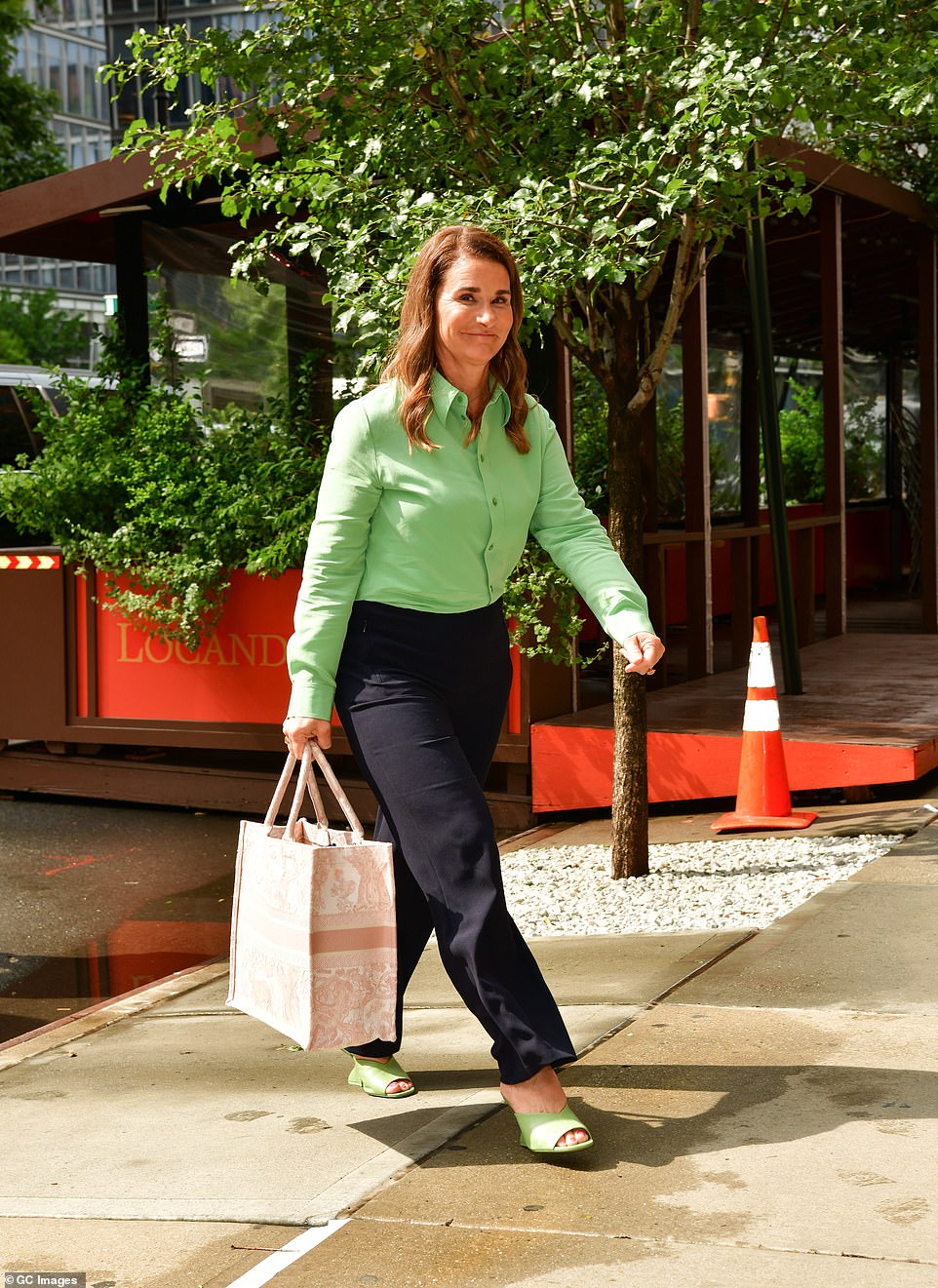 She is also said to have paid a visit to famed Tribeca comfort food spot Bubby’s.

While Melinda enjoyed enjoyed her newly-single life with a girls’ trip away, Bill was schmoozing with his billionaire boys at the Sun Valley conference in Idaho.

At the so-called  ‘billionaire summer camp’ running from July 6 to 10, the Microsoft founder opened up about the couple’s pending divorce in an ‘off the record’ question-and-answer session, according to the New York Post.

In the session, a tearful Bill reportedly admitted that the breakdown of the marriage was his fault.

‘He fessed up to messing up,’ one attendee told the Post.

Melinda, meanwhile, has not spoken publicly about their split, instead using one of her own first public appearances since the announcement to reveal the Gates Foundation will spend $2.1 billion on gender equality work.

Melinda appeared on stage at the Generation Equality Forum in Paris in June to call for the need to ‘lift up women’ and make one of the largest single commitments the foundation has made in more than two decades.

In the session, her wedding ring was notably absent from her ring finger. 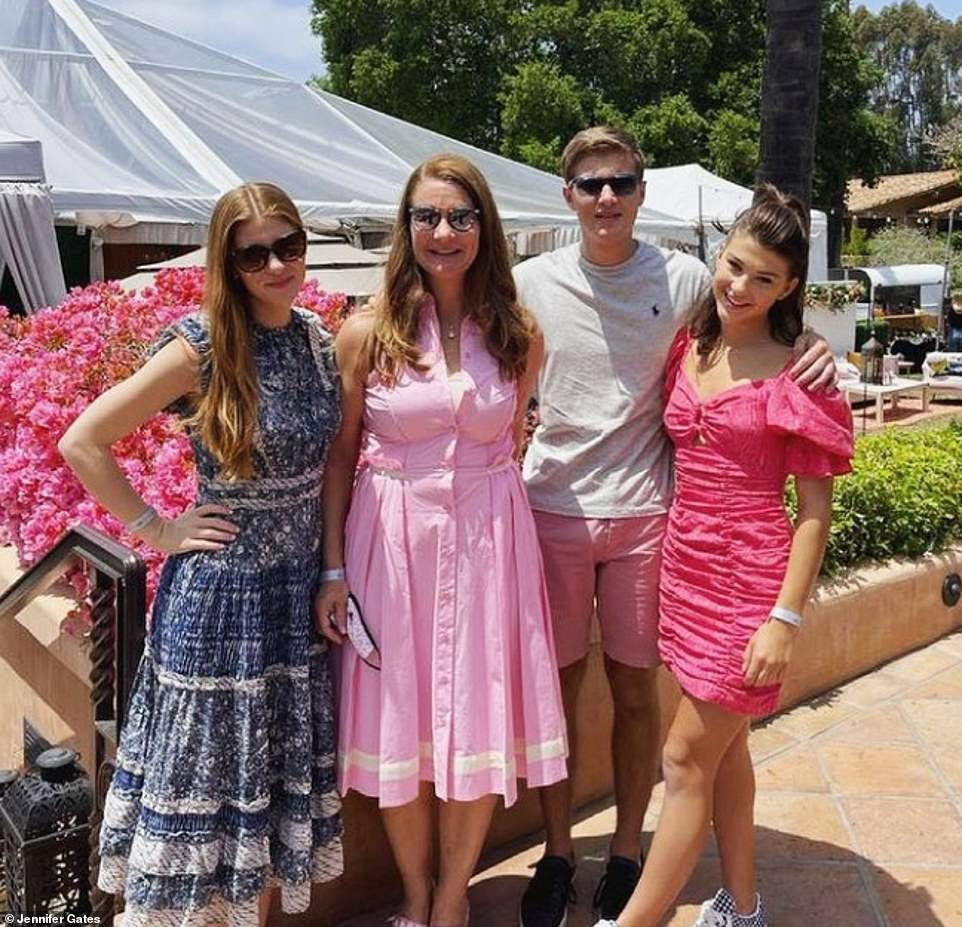 Melinda with her three kids Jennifer (left), Rory (center) and Phoebe (right) in a Mother’s Day snap posted by Jennifer 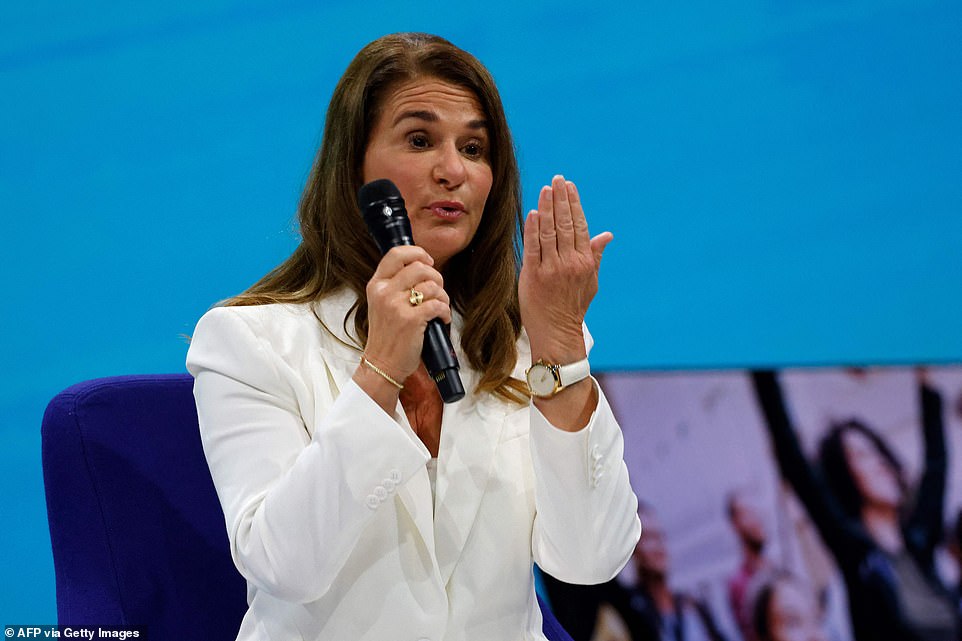 Bill’s purported admission of fault over their break-up comes after he was forced to confess in May that he had an affair with a female Microsoft worker back in 2000 while he was married to Melinda.

A report from the Wall Street Journal claimed he had an ‘inappropriate’ sexual relationship with a female staff member in 2000.

Bill was CEO of the company at the time. It is not clear what position or level of seniority the employee was.

The affair stayed a secret until 2019 when the employee wrote a letter to the board detailing what had happened and allegedly asking that Melinda read it.

The company opened an investigation into the claims.

While the investigation was still ongoing in March 2020, Bill shocked the business world by announcing he was resigning from his position on the company board.

The same day Bill stood down from the board of Berkshire Hathaway, run by his friend Warren Buffet.

Last month, Buffet announced he was resigning from the board of the Gates Foundation.

Bill’s spokeswoman confirmed he had an affair almost 20 years ago with a staff member and that the relationship ended ‘amicably.’ She denied the affair was connected in any way to his abrupt departure from the board. 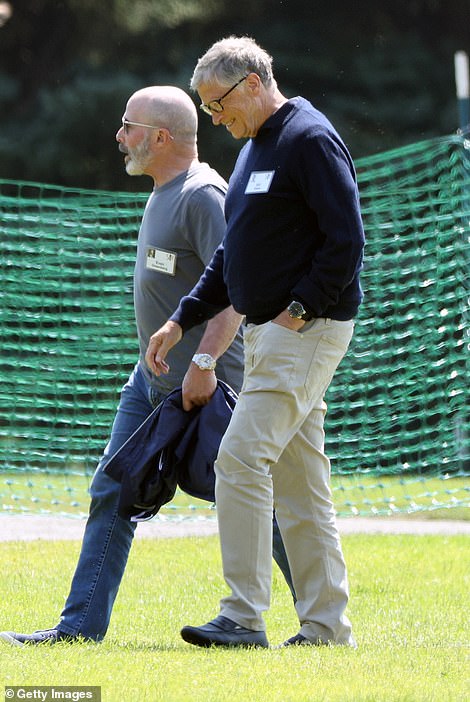 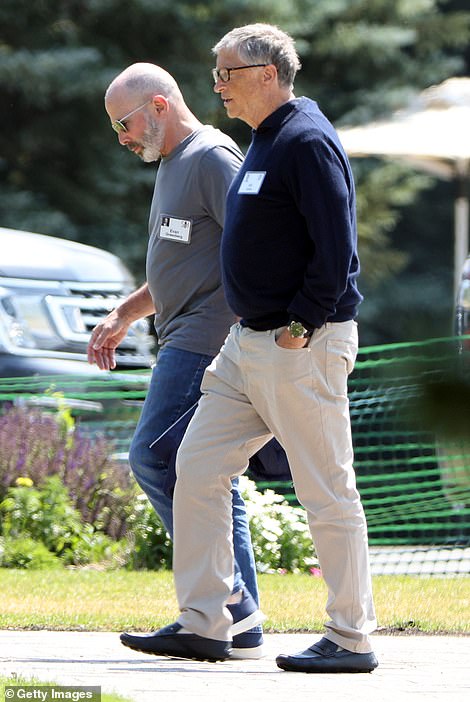 Meanwhile, two female Microsoft employees also claimed he asked them out on dates and was known to have pursued several women at the tech giant during his marriage.

The New York Times reported two separate instances where he asked female employees out on dates.

In one case, he is said to have asked out a Microsoft employee in 2006 after watching her make a presentation.

‘If this makes you uncomfortable, pretend it never happened,’ Gates emailed the employee, according to the Times.

A couple of years later, Bill then asked out an employee with the Bill and Melinda Gates Foundation.

The pair were in New York for a work trip, when he told her: ‘I want to see you. Will you have dinner with me?’

The woman told the Times the approach made her feel uncomfortable, but she laughed it off.

There was no expectation that the women would suffer professional repercussions for spurning his advances, the Times reported. 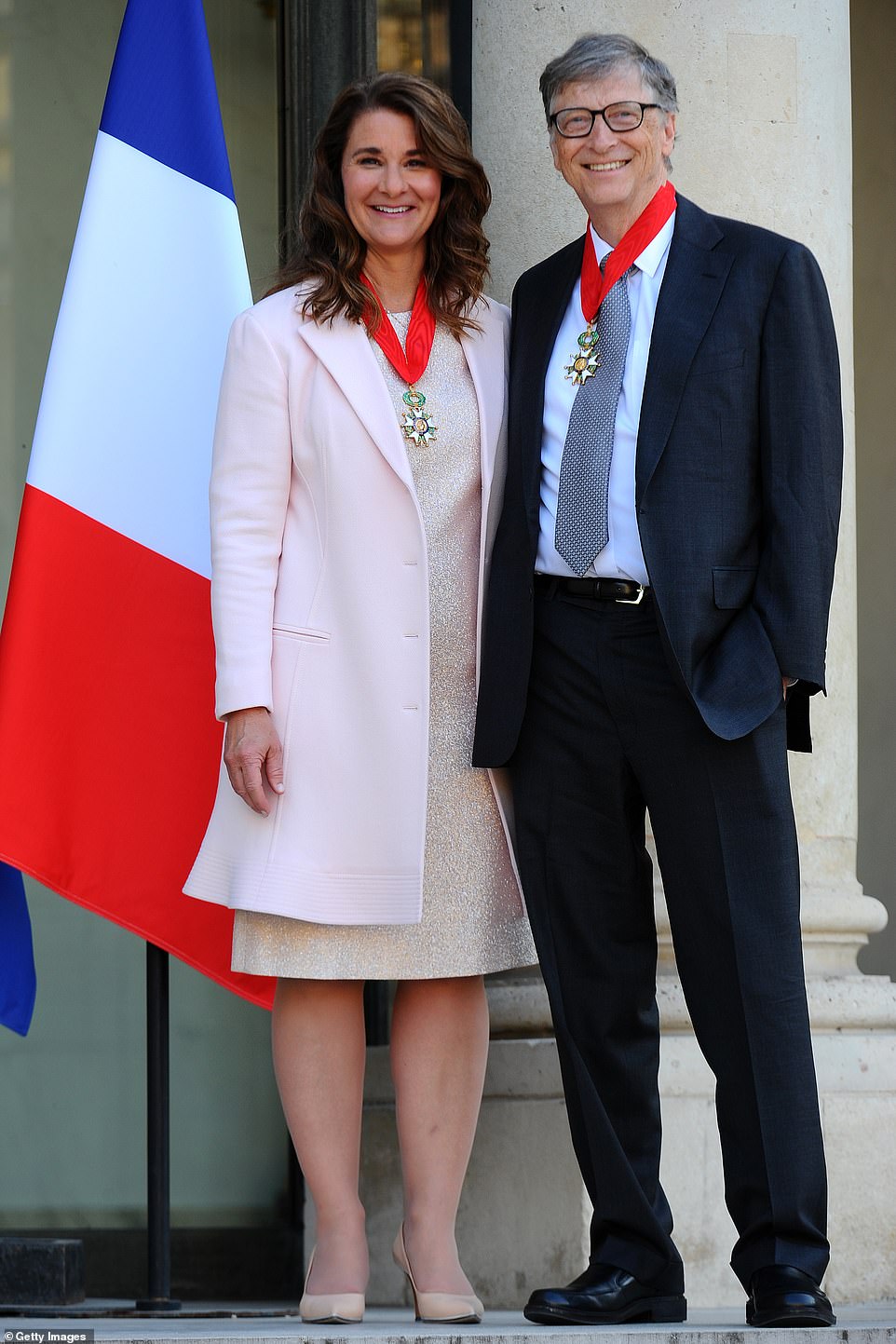 Melinda and Bill seen after receiving the Commander of the Legion of Honor in Paris in 2017. The couple announced they were getting divorced in May

It’s not clear whether Melinda was aware of her husband’s advances on other women.

However, she was aware of and unhappy with the handling of sexual harassment allegations against Michael Larson, one of Bill’s key lieutenants and the manager of his personal fortune, the report said.

In 2017, a person wrote to Bill and Melinda to complain that Larson was harassing a female staff member at a bicycle shop part-owned by a venture capital firm Rally Capital, owned by the former married couple.

The woman reached a settlement in 2018, signing a non-disclosure agreement and receiving a payout.

Bill’s spokeswoman denied Gates ever mistreated employees in a statement to the Times.

However, Melinda was reportedly unhappy with the outcome and ordered an independent investigation.

According to the New York Times, Larson was placed on leave during the investigation but was reinstated and still looks after Gates’ vast fortune.

Bill’s friendship with billionaire pedophile Epstein has also increasingly come under the spotlight in recent weeks.

The two men’s friendship began in 2011, three years after Epstein had pleaded guilty to soliciting prostitution from a minor.

There is no suggestion that Gates did anything wrong.

3 remain hospitalized after struck by power line in Valdosta

Louis Bacon and Moore Capital - an apology By Every day Mail Reporter Up to date:...