A memorial to the 22 people murdered in the Manchester Arena terror attack will officially open to the public from today – in the form of a white marble ‘halo’ bearing the names of those killed in the attack five years ago.

Families of those who lost loved ones in the May 2017 atrocity have been able to make personalised memory capsules, containing mementos and messages embedded inside the halo of the ‘Glade of Light’ memorial.

They have also been given the opportunity to visit privately before the memorial opens. Fences around the site, where work began in March last year, will be taken down for the public to be able to visit the memorial today.

An official opening event is planned for the spring, ahead of the fifth anniversary. The site is located between Manchester Cathedral and Chetham’s School of Music, at the foot of Fennel Street where it meets Victoria Street.

Hundreds of people were injured alongside the 22 who died, who included six children under 16, the youngest aged just eight, in the attack by suicide bomber Salman Abedi at the end of an Ariana Grande concert. 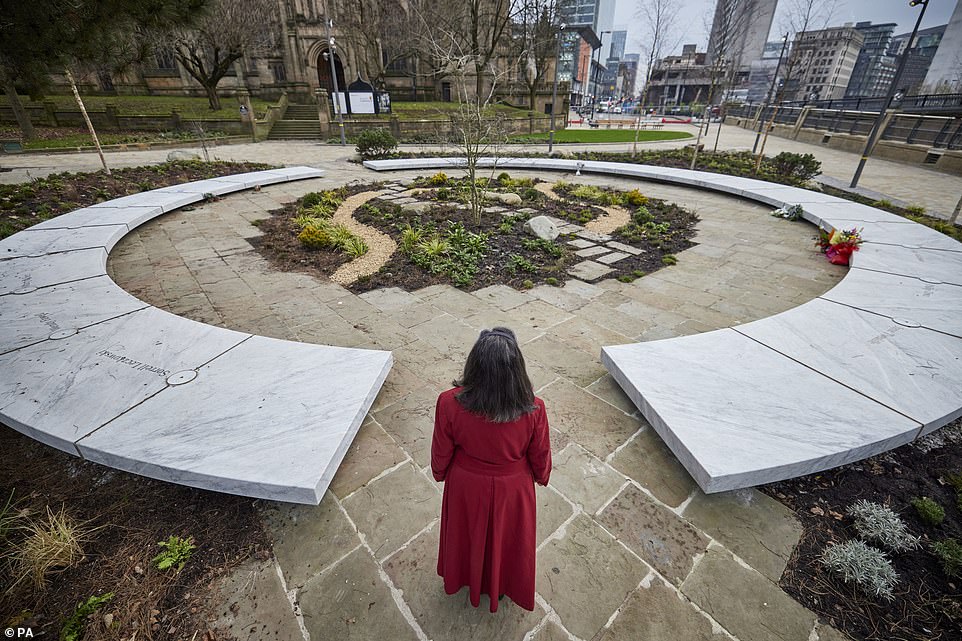 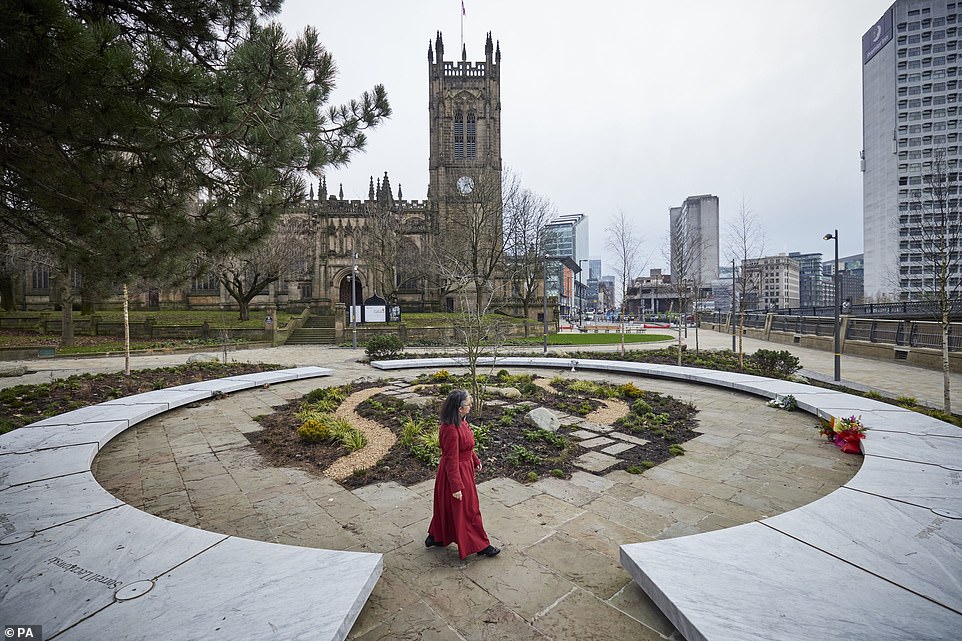 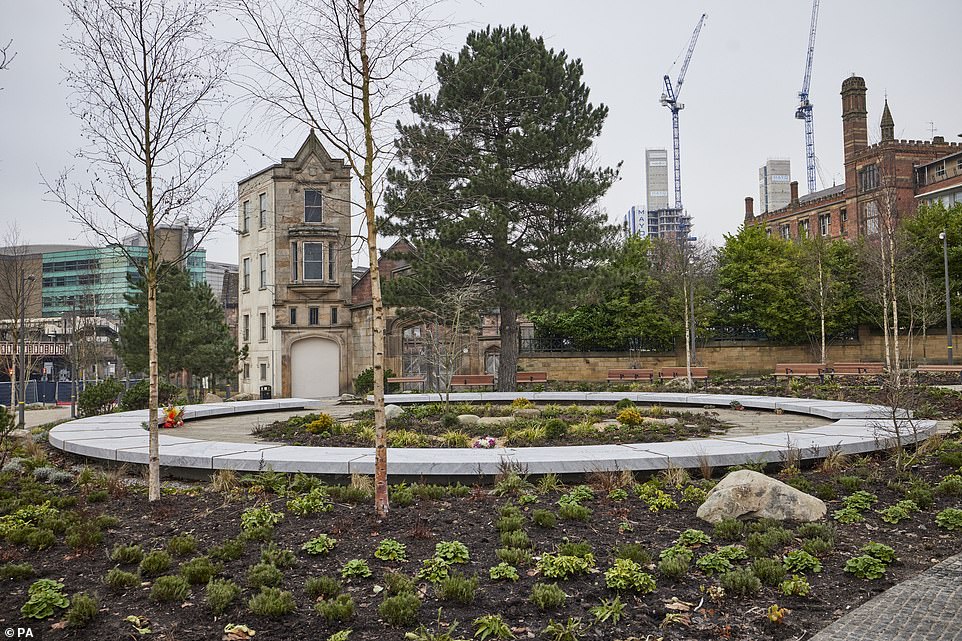 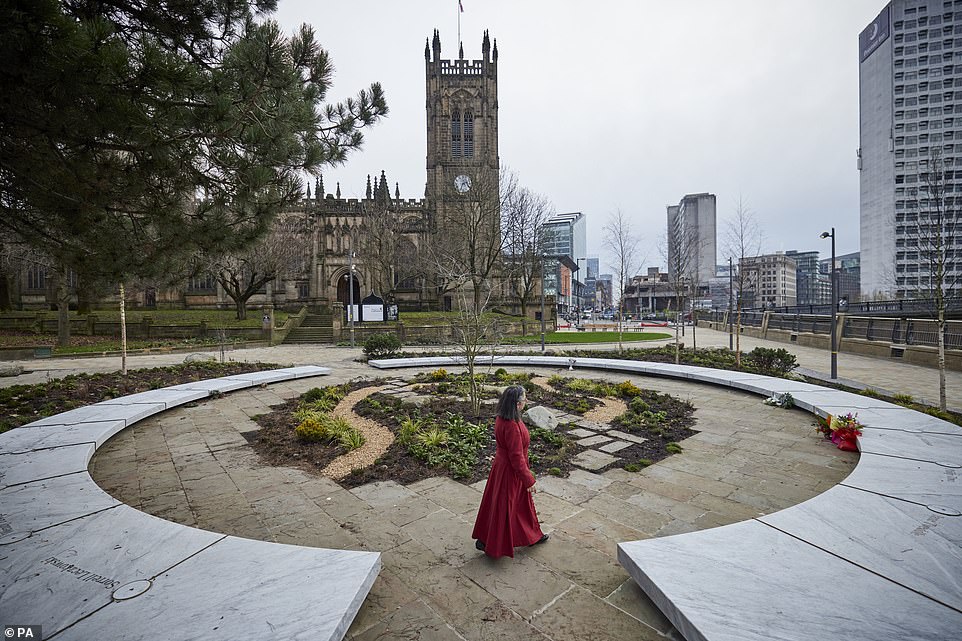 The tribute is conceived as a living memorial – a peaceful garden space for remembrance and reflection, featuring plants which grow naturally in the UK countryside and have been selected to provide year-round colour and echo the changing seasons.

Around the anniversary every year, May 22, the white flowers of a hawthorn tree planted at its centre will bloom.

Manchester City Council leader Bev Craig said: ‘We will never forget those whose lives were lost on 22 May 2017. ‘They already had a permanent place in the hearts of Manchester people.

‘Now they have a lasting memorial in the heart of our city. The Glade of Light is a beautiful tribute to them and somewhere which will also have profound meaning for everyone affected by the attack.

‘We hope the memorial site will be a place of peace and comfort, standing as a reminder that love is stronger than hate.’ 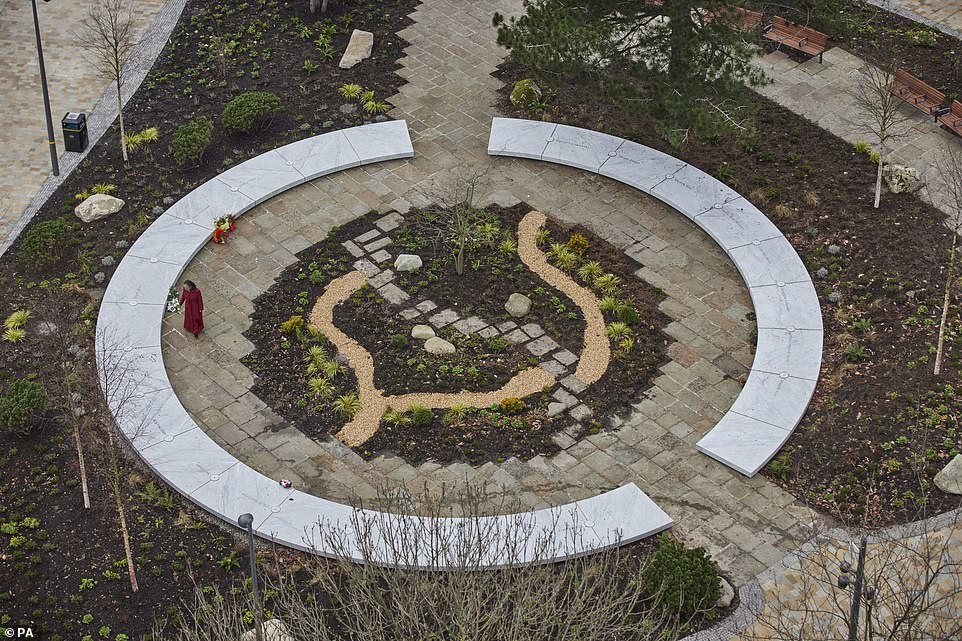 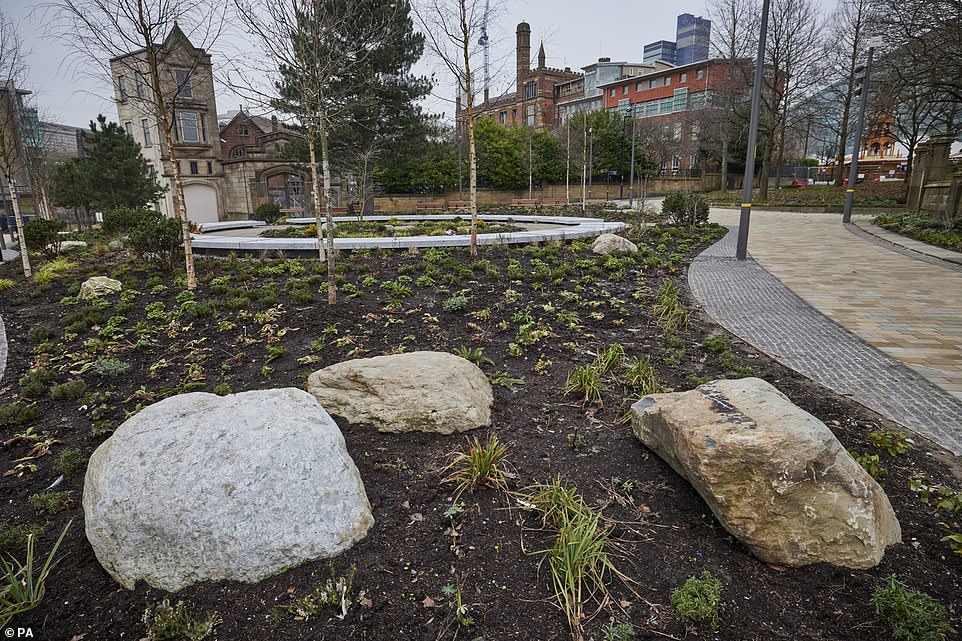 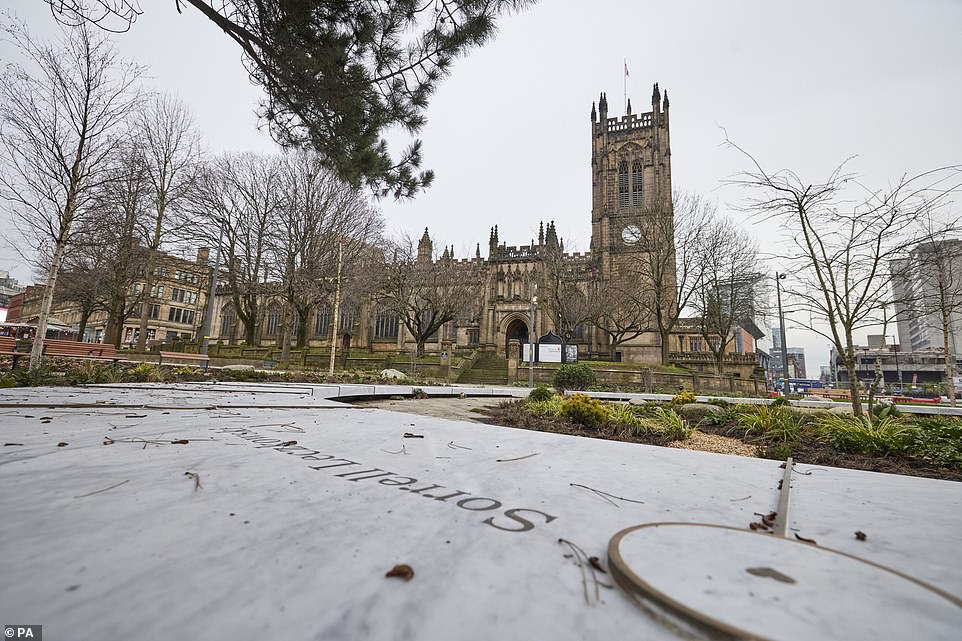 It comes one month after families of victims told of their ‘disgust’ after trespassers urinated and vomited on the memorial garden before its official opening.

Caroline Curry, from South Shields, whose 19-year-old son Liam was killed in the bombing alongside his girlfriend, Chloe Rutherford, 17, said in December that she had been left devastated by the trespassers entering the site.

The Glade of Light memorial site was created to provide a ‘tranquil place’ of ‘remembrance and reflection’ for families and friends of those who tragically lost their lives.

However, hundreds of people were said to have been walking through the garden despite it being closed to the public at the time.

Ms Curry told the BBC that one man stood on the central stone of the memorial, which contains the names of those who lost their lives, and was ‘abusive when she challenged him, whilst another woman vomited over the site’. 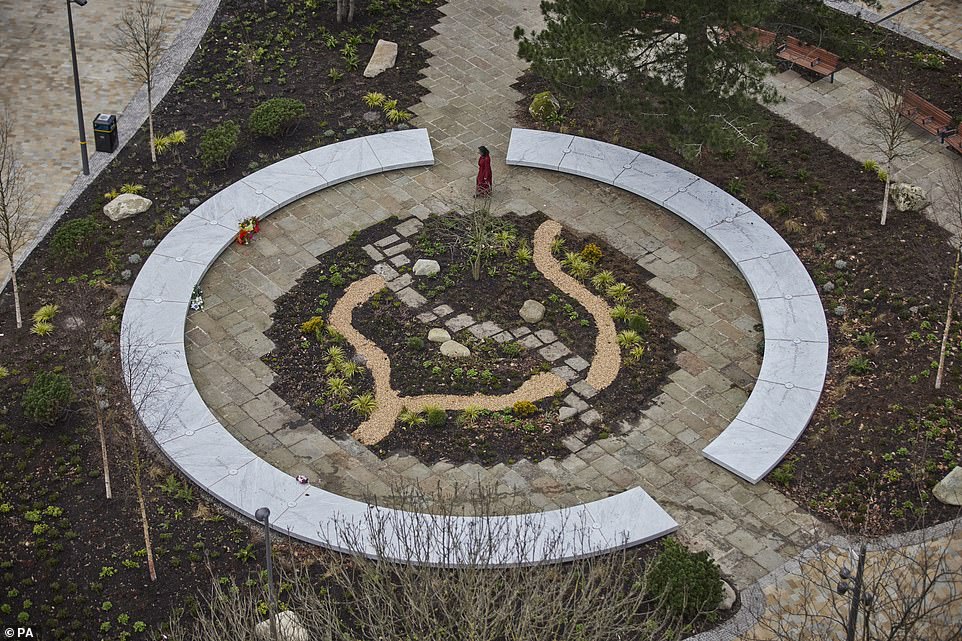 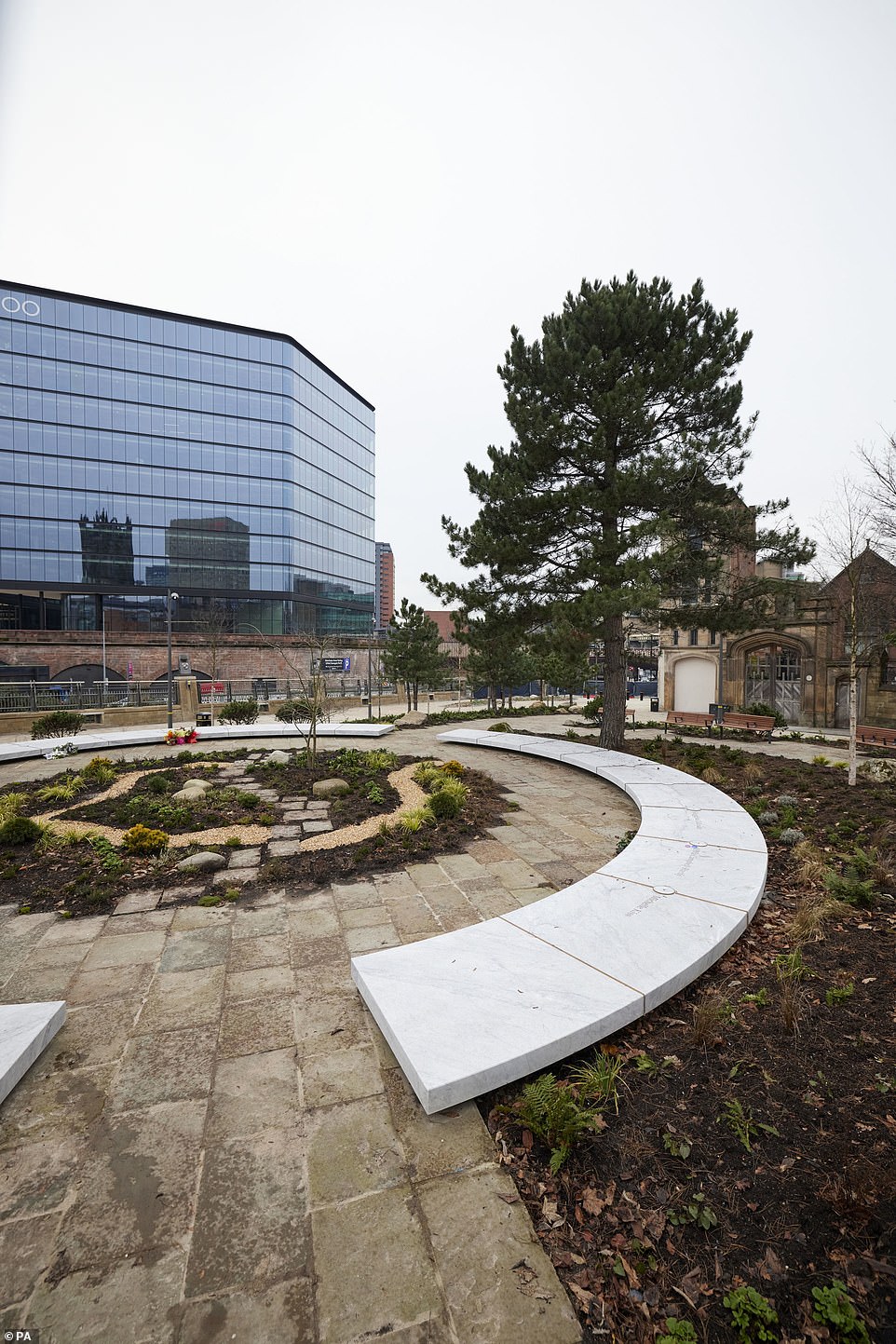 It is between Manchester Cathedral and Chetham’s School of Music, at the foot of Fennel Street where it meets Victoria Street 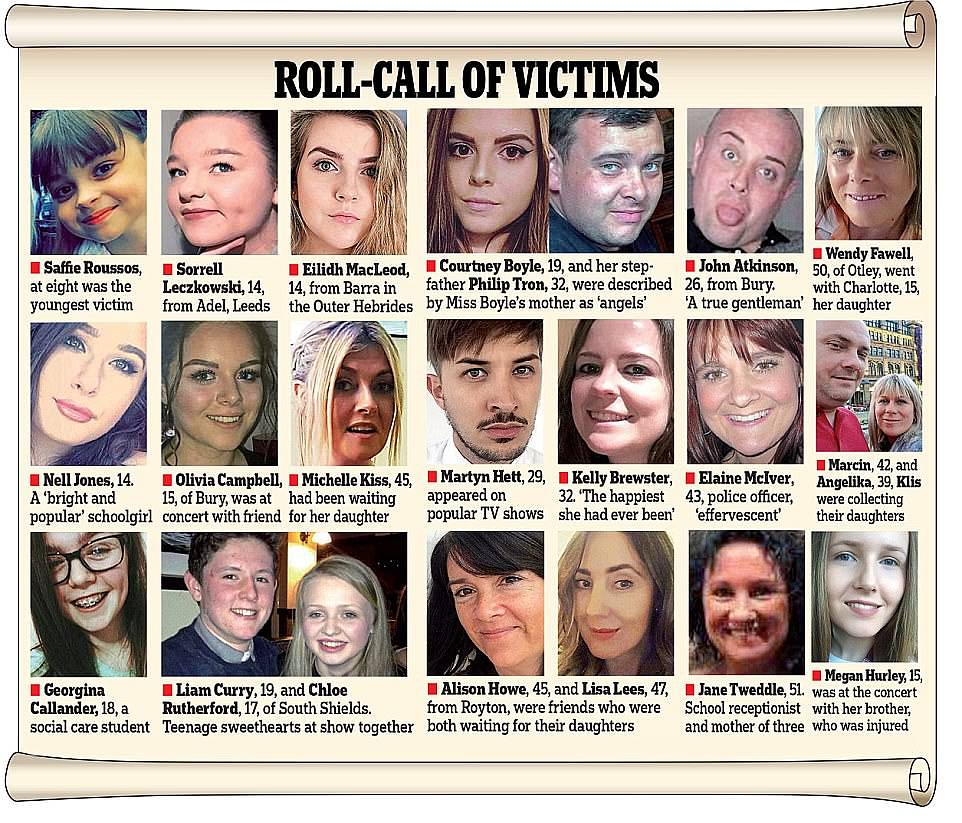 Manchester City Council was reported to have sent a security team to the garden to keep people out until the incident can be fully investigated as a ‘matter of urgency’.

Kelly Brewster, 32, from Sheffield, lost her life after she entered the City Room, the foyer of the Arena, just seven seconds before suicide bomber Salman Abedi detonated his home-made rucksack bomb.

She was standing about 30ft away and suffered unsurvivable injuries to her abdomen and head.

Her sister, Claire, who also was hurt in the blast, said she was ‘devastated’ to see people moving the fences to walk cut through the site after she arrived in Manchester.

Ms Curry and Ms Brewster teamed up to try and keep people out of the site as best they could.

Manchester City Councillor Pat Karney said at the time they would do what was needed to ‘keep the site secure’ and there was ‘no excuse for the kind of behaviour in and around the memorial site witnessed by the bereaved relatives’.