Men behind the masks: As Daft Punk announce split, FEMAIL delves into the lives of publicity-shy duo

Famously publicity shy, Guillaume Emmanuel de Homem-Christo (known as Guy-Manuel, or Guy-Man) and Thomas Bangalter first started performing together in 1993 after meeting at school in Paris and bonding over their shared love of Sixties music.

Their career has spanned almost three decades and has produced four chart-topping albums, six Grammy wins and has made them serious money: they are thought to be worth an estimated £50million each.

But while many in their position are household names, Homem-Christo and Bangalter have remained out of the spotlight – largely thanks to their love of performing in robot-inspired headgear and avoiding public events.

The pair have previously said it is because they don’t believe in ‘stars’ – although they have collaborated with some of the biggest in the industry, including Pharrell Williams and the Weeknd – and wanted the focus to remain on the music. 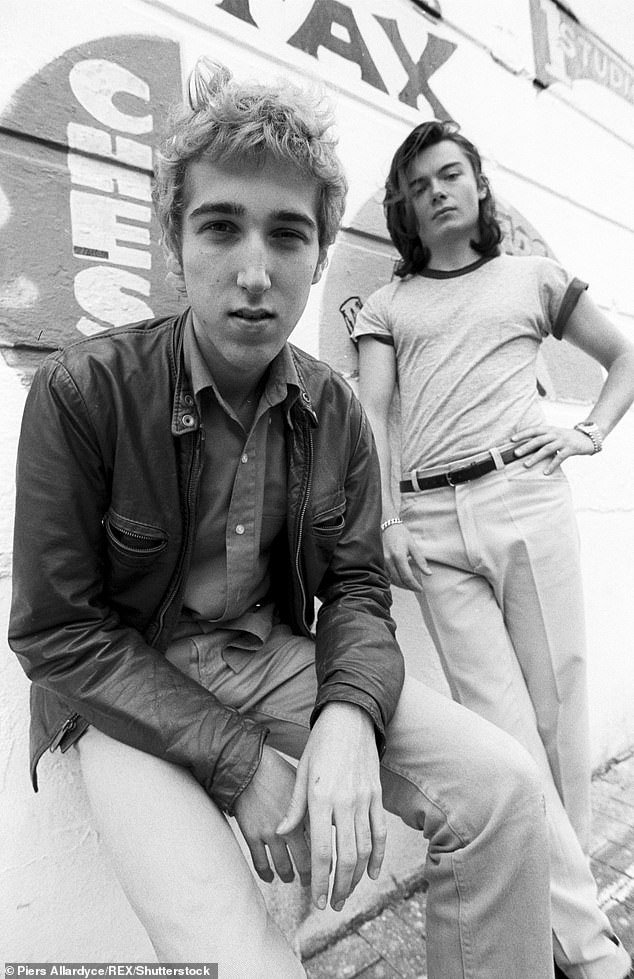 Early years: Thomas Bangalter and Guy-Manuel de Homem-Christo, pictured in 1995, met while at Lycée Carnot school together in 1987 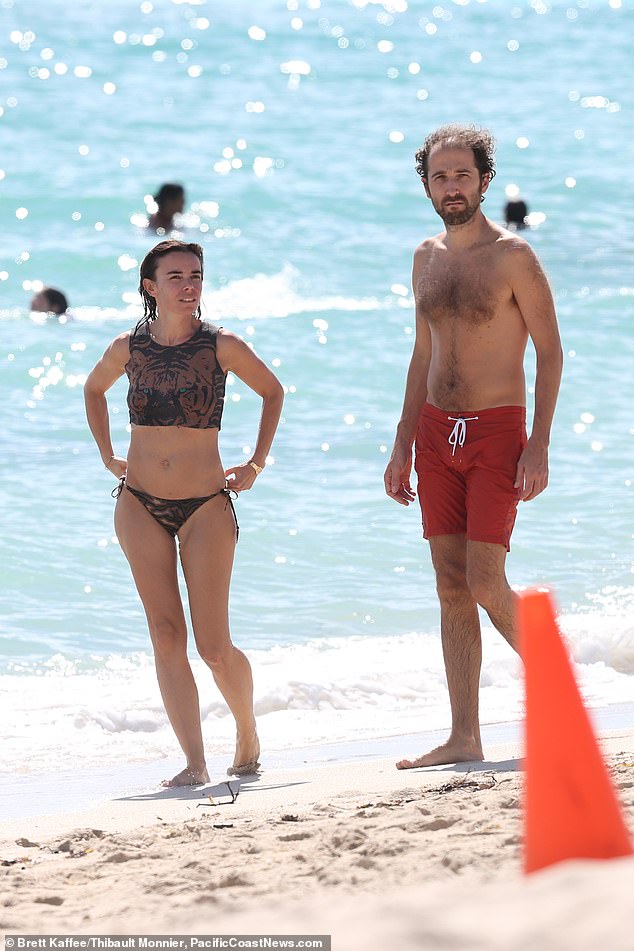 Glamorous other half: Bangalter’s wife, French actress Elodie Bouchez, is no stranger to the spotlight. Pictured together in Florida in 2013, where they were attending good friend Pharrell Williams’ wedding to model Helen Lasichanh 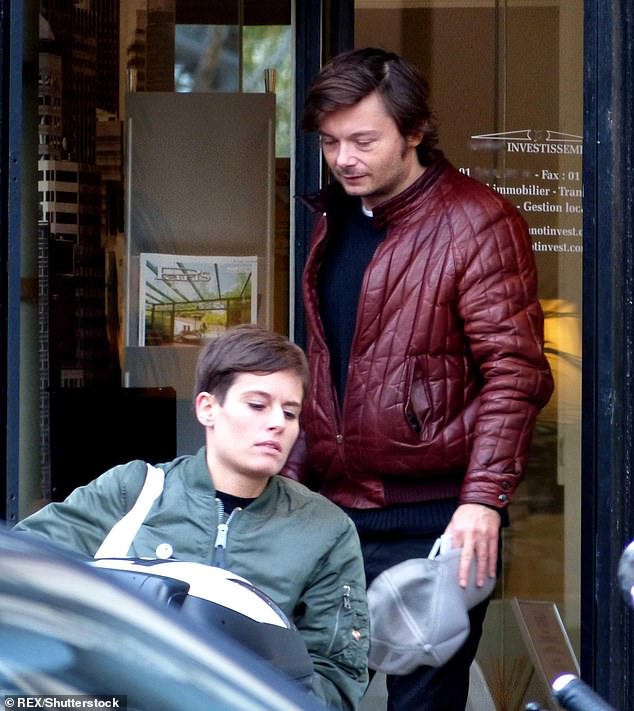 Ultra private: Little is known about Homem-Christo’s partner – believed to be called Guila and the mother of his two children (pictured together in Paris in February 2014) 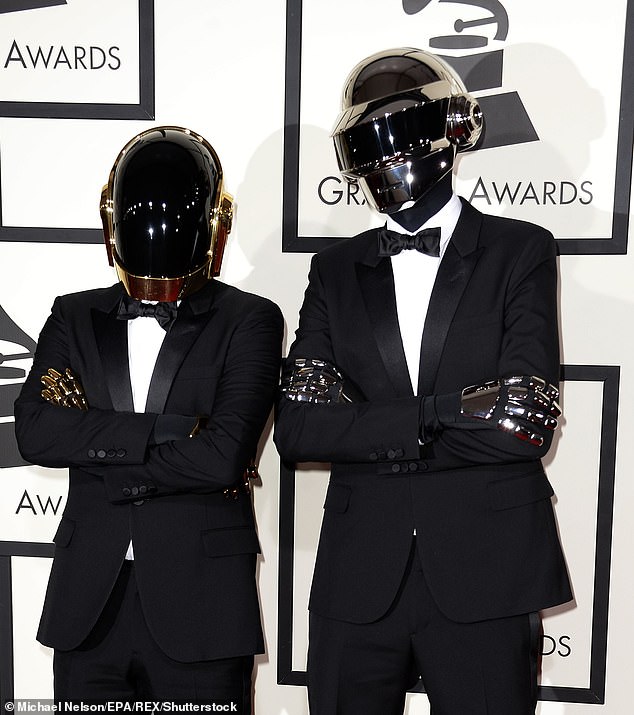 Indeed Homem-Christo is so private that he’s never made a public appearance with his wife and has only been photographed off-duty a handful of times.

Bangalter, whose father wrote Ottowan hit D.I.S.C.O and is married to French actress Elodie Bouchez, is marginally more high profile and the chattier of the two.

The reason behind their sudden split is unknown; their longtime publicist Kathryn Frazier confirmed the news but gave no explanation.

However the pair, who last released music in 2016, both have their own projects: Homem-Christo as a songwriter and Bangalter as a music label owner and aspiring film director.

So, as the chapter closes on one of the most successful electronic dance duos of all time, FEMAIL asks: who are the men behind the helmets?

SCHOOL PALS WHO BONDED OVER LOVE OF SIXTIES MUSIC 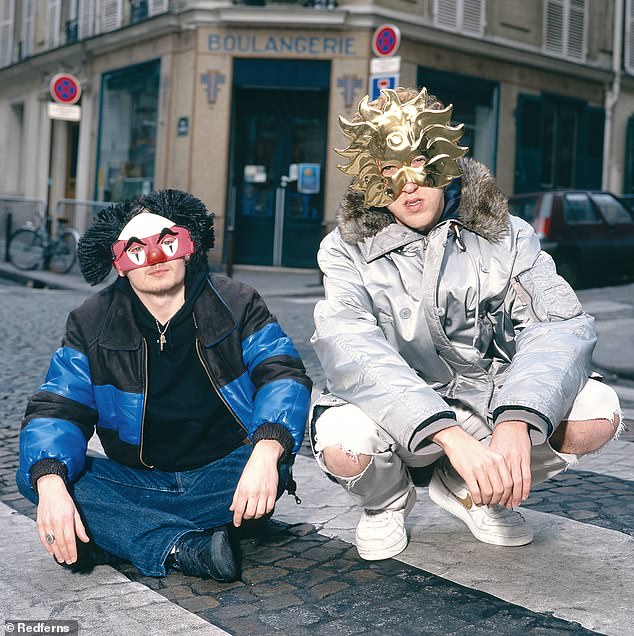 Their ‘superhero capes’: The duo, pictured in 2001, perform while wearing robot-inspired headgear to conceal their identities and say they ‘don’t believe in the star system’

Film star: During an interview with Elle in 2018, Elodie (pictured right at the Saint Laurent Womenswear Spring/Summer 2020 show as part of Paris Fashion Week in 2019) praised her husband (left at Cannes in 2017) for being ‘totally anchored in reality’, and insisted she is the same 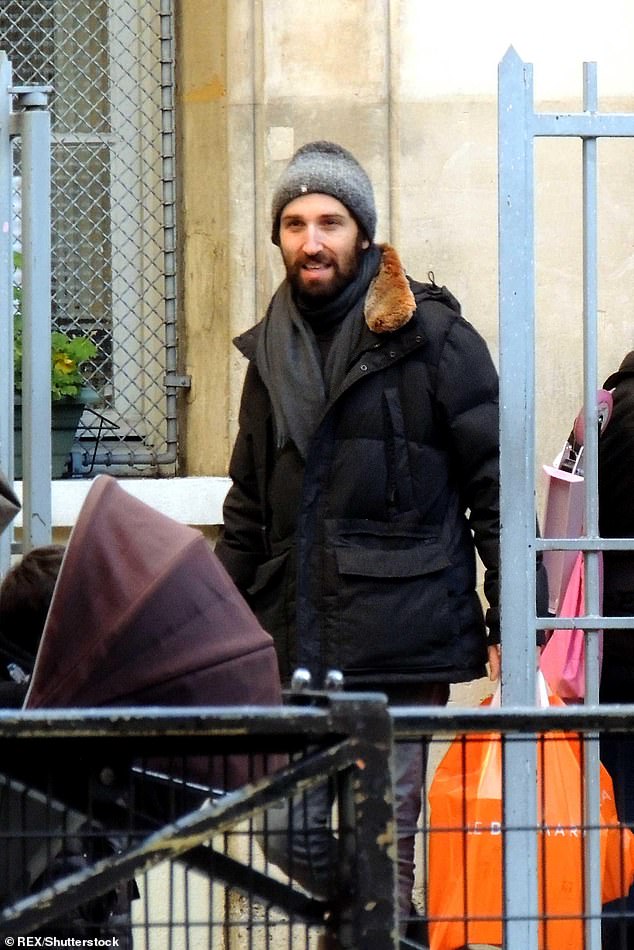 Avoiding the spotlight: Thomas Bangalter, pictured out and about in Paris in February 2014, is the more talkative of the pair during interviews

Paris-born Bangalter, 46, and Homem-Christo, from Neuilly-sur-Seine, met while both attending the Lycée Carnot state school in Paris together in 1987.

Bangalter came from a family of musicians; his father is Daniel Vangarde, the French songwriter who wrote the Ottawan hit D.I.S.C.O.

Both men have no interest in being celebrities and are notoriously private about their personal lives.

Early on in their career, Bangalter said they ‘don’t believe in the star system’ and want the focus ‘to be on the music’.

‘If we have to create an image, it must be an artificial image,’ he told Jam! showbiz. ‘That combination hides our physicality and also shows our view of the star system. It is not a compromise.’

In a later interview with GQ in May 2013, Bangalter – the more talkative of the two during public chats – likened their iconic robot headgear to a Superman costume.

‘I remember when I was a kid, I would watch Superman, and I was super into the feeling of knowing that Clark Kent is Superman and no one knows,’ he explained.

‘We always thought as we were shaping this thing that the fantasy was actually so much more exciting than the idea of being the most famous person in the world.’

Homem-Christo’s parents were also into music (he grew up listening to Led Zeppelin and The Eagles) but worked in advertising.

It was at school that the pair discovered their shared love of films and music from the Sixties and Seventies. After teaming up with musician Laurent Brancowitz, they formed the indie rock trio Darlin’.

A negative review which branded their music ‘daft punky trash’ gave Bangalter and Homem-Christo the idea for their new project, after their interest shifted towards electronic dance music following a visit to a club in 1992.

The pair are credited with bringing the French underground house scene to the charts, while Homem-Christo designed the Daft Punk logo in the liner notes of Homework.

While little is known about Homem-Christo’s partner – believed to be called Guila and the mother of his two children – Bangalter’s wife Elodie Bouchez is no stranger to the spotlight.

The French actress, 47, is probably best known for her role as Renée Rienne in the fifth season of the television show Alias, and for playing Maïté Alvarez in the film Wild Reeds.

The couple also have two children – sons Tara-Jay (born in 2002) and Roxan (born in 2008) and live a relatively low-key life in Paris, having previously resided in Beverly Hills, California.

In October 2013 the couple were spotted soaking up the sun together in Florida, where they were attending good friend Pharrell Williams’ wedding to model Helen Lasichanh.

During an interview with Elle in 2018, Elodie praised her husband for being ‘totally anchored in reality’, and insisted she is the same.

‘We have a more normal Parisian life than what we imagine of us,’ she said, attributing this largely to Daft Punk’s choice to ‘advance masked’.

A £50MILLION FORTUNE – EACH 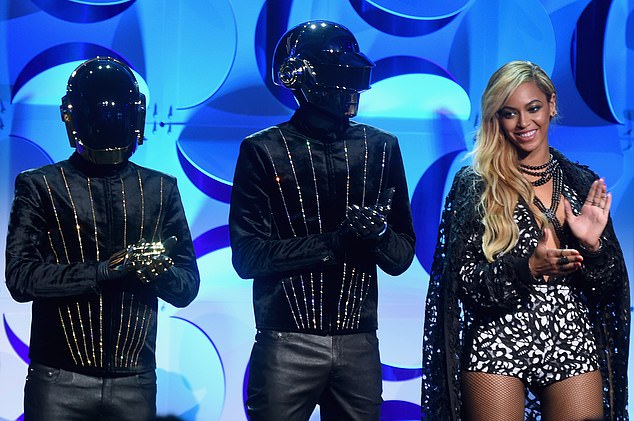 Famous friends: Both men have no interest in being celebrities and are notoriously private about their personal lives (pictured in costume alongside Beyonce onstage at the Tidal launch event #TIDALforALL at Skylight at Moynihan Station on March 30, 2015 in New York) 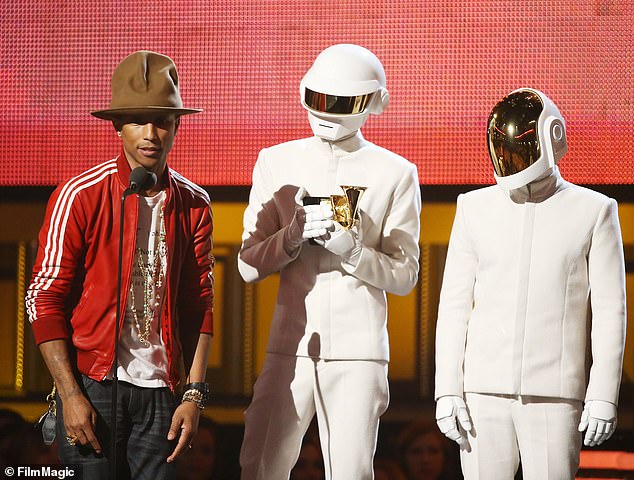 Chart success: Daft Punk released their last album, Random Access Memories, featuring the track Get Lucky (featuring Pharrell Williams, pictured with the duo on stage during the GRAMMY Awards in January 2014) which topped the charts worldwide, in 2013

The duo’s combined net worth is £99million, according to meaww.com, while both musicians are estimated to be worth close to £50million individually.

Most of their fortune has been amassed from their touring and Grammy award-winning albums – an impressive figure given Daft Punk’s regular ‘quiet periods’.

It was reported that Bangalter had quit DJing in clubs to ‘protect his ears’ after developing tinnitus in 2002 – though it later emerged he’d sufficiently recovered after having ‘a bit of a scare’.

Their album Discovery went triple platinum, and their fourth and final compilation, Random Access Memories, was a worldwide number one hit.

The band has remained largely inactive since, making their final live appearance in October 2010 when they were surprise guests during Phoenix’s headlining show at Madison Square Garden.

Daft Punk’s most recent release came in 2016 when they collaborated with The Weeknd on two tracks – Starboy and I Feel It Coming. The former earned the duo their first number one on the Billboard Hot 100. 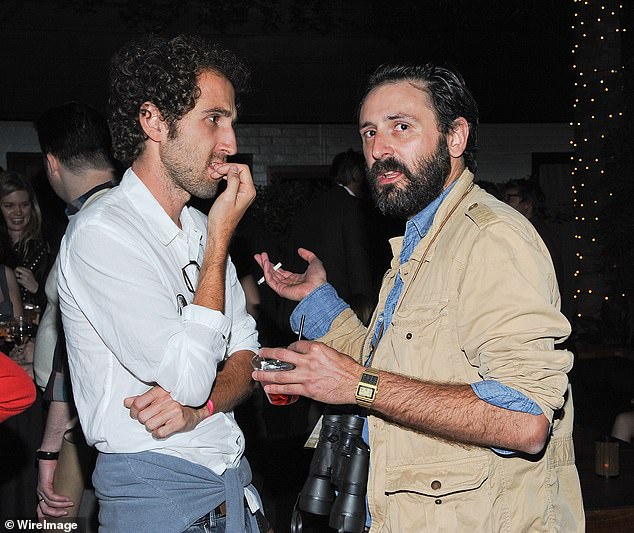 Film career: Thomas Bangalter (left) and writer/director Quentin Dupieux attend the ‘Rubber’ After Party at Tropicana Bar at The Hollywood Rooselvelt Hotel in 2010 in Hollywood 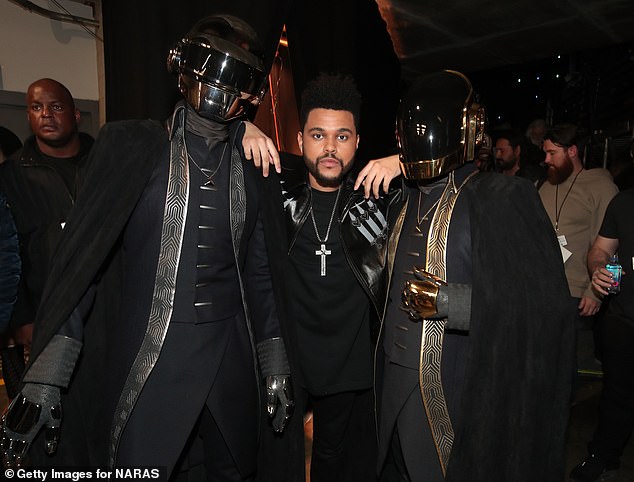 Homem-Christo and Bangalter both contributed writing and production credits to the 2017 song Overnight by Parcels – their final production work as a pair before announcing their split this week.

Both men have already enjoyed solo success, usually behind the scenes; Homem-Christo worked on the title track of Charlotte Gainsbourg’s fifth studio album Rest, released in 2017, and also contributed to the 2018 song Hurt You, a collaboration with The Weeknd and Gesaffelstein.

Last year during the Covid-19 pandemic, he created a curated playlist called ‘Star of a hero’ for the Italian brand MEDEA, containing tracks from the Beach Boys, The Weeknd, George Duke and Thundercat.

Meanwhile Bangalter, who owns the music label Roulé, is an aspiring film director and cinematographer as well as a music producer.

He’s provided compositions for films such as Irréversible (2002 – directed by Gaspar Noé), was the sound effects director for the 2009 film Enter the Void and directed and choreographed a short film featuring his wife that served as an advert for the fashion line Co.

In June 2017, it was announced Bangalter would be a co-producer on Arcade Fire’s album Everything Now, and he worked with filmmaker Noé again in 2018, providing two tracks for the film Climax, including the previously unreleased Sangria.